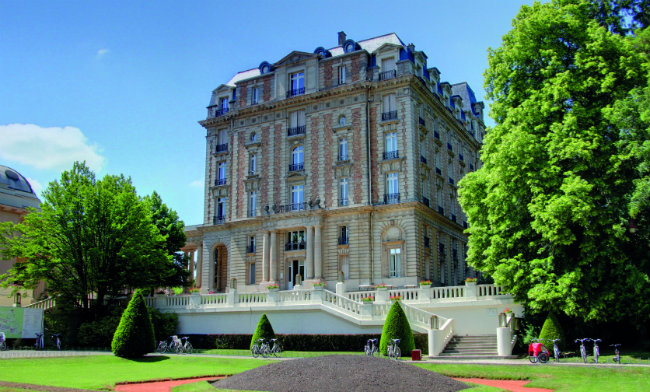 Did you watch the Tour de France 2017? The world’s most iconic bicycle race passed through some equally iconic locales. Readers have asked for more information about places they’ve seen on TV (or as real-life spectators!). Join us on a whistle-stop tour of five esteemed ‘stage cities’ from the 2017 line-up… 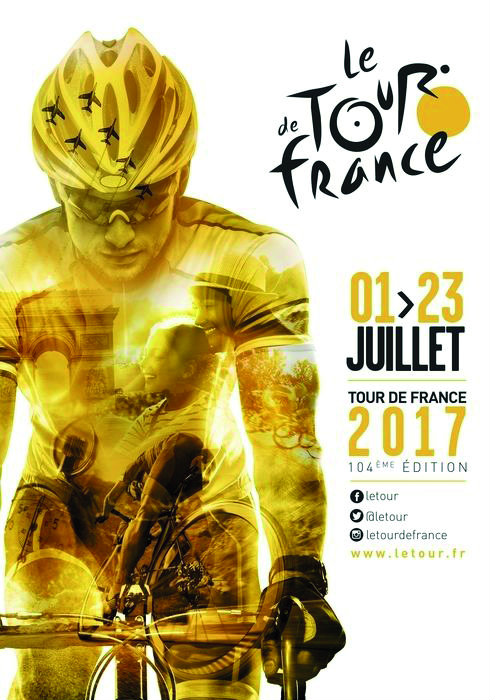 Vittel, of bottled-water fame, was the second French stop in this year’s Tour de France. At face value, it’s a refuge for city-weary travellers (despite being one itself). Boasting 650 hectares of land, green credentials and accolades for its flowers, it’s a natural haven wrapped in an urban setting. Dig a little deeper, however, and you’ll unearth interesting ties to the past as well. Its proximity to Germany – which the competing cyclists experienced first-hand after departing Düsseldorf – saw the area involved in both World Wars, making it an equally fascinating destination for history buffs.

WWII transformed Vittel into an internment camp under the Reich. Most of the inmates were said to be British or American women forced to live in the resort’s hotels, penning letters to family back home and doing what they could to survive. Tragically, many of the Jewish internees seeking sanctuary here were eventually exposed and deported to their deaths at Auschwitz, prior to the base’s liberation by the French Resistance in September 1944. There’s little sign of the city’s wartime involvement today and one is hard-pressed to imagine its splendid hotels populated by thousands of Allied prisoners, but knowing its history makes for a stirring visit.

The reality is that Vittel is best known for its eponymous bottled water, which has placed it firmly on the map since the 1850s. Originally, the locally-sourced mineral water was used for curative purposes, but with its popularity came commercial success and the brand was eventually acquired by food giant Nestlé in 1992. We all know the logo; we’ve all seen the adverts; but what of the product’s namesake and source?

As one might expect from what is essentially a large spa town, Vittel is certainly a breath of fresh air and nothing short of a natural paradise. Flowers in particular play a starring role in its identity as a green city. Thanks to its impressive floral displays, it’s been awarded the esteemed ‘Floral town/village’ title by the Conseil National des Villes et Villages Fleuris for several years. Nearly 40,000 fleurs are arranged as part of its annual entry, blooming across the cityscape like paint on a canvas.

There’s also a ‘Route des Jardins’ to cater to the wanderers among us, showcasing 11 themed gardens throughout Vittel and its neighbour, Contrexéville. Alternatively, meander along to ‘Les Jardins de la Terre’ (or ‘The Gardens of the Earth’) for a sense of the city’s conservation efforts; you’ll find three hectares of garden bearing a strict no-pesticides policy, filled with ladybird houses, bee-friendly zones and a butterfly garden, to name just a few of the ecological wonders. Of course, the crème de la crème is the Vittel Thermes Spa. For incomparable relaxation, treat yourself to its choice of beauty treatments, massages, a sauna and jacuzzi. Above all else, Vittel is a luxury resort and lives up to its reputation with a broad choice of leisure amenities, including golf courses, tennis courts, swimming pools, an equestrian centre and plentiful green spaces. 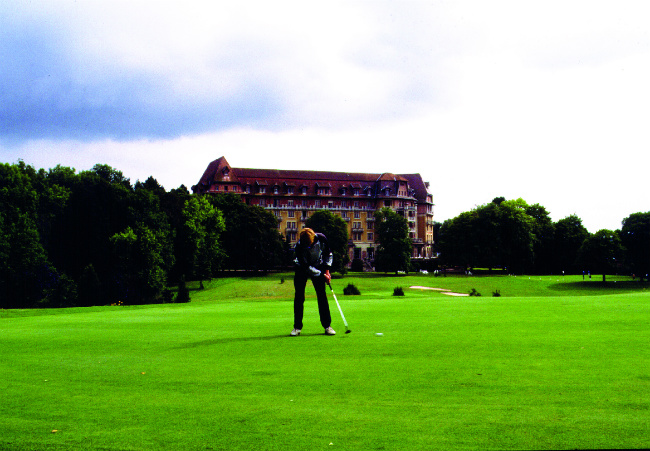 Vigie de l’Eau: In a city whose status is built upon fresh water, it’s no surprise that there’s an information centre dedicated to the thirst-quenching drink. Featuring events over the course of the year, guided tours and interactive displays, educational games and lms for kids, it’s ideal for families or those looking to learn more about Vittel’s world- famous export. www.lavigiedeleau.eu

Club Med Vittel Le Parc Hotel: No trip to Vittel is complete without dropping in to the Club Med hotel. Decorated with Art Deco furnishings and surrounded by parkland, the retreat specialises in health and wellbeing. It offers pools, fitness classes, golf, tennis, archery lessons and horse riding, and is a mere eight-minute walk from the spa. www.clubmed.com/Vittel-Le-Parc 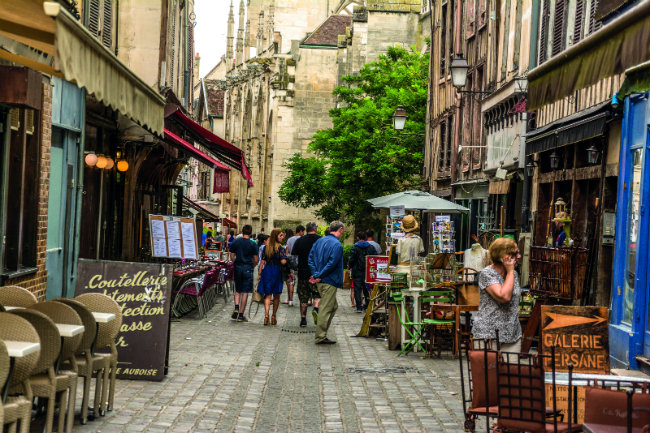 Seventh stage of the Tour de France and seventh heaven for tourists, Troyes is the self-professed ‘city of a thousand colours’. There’s certainly a nugget of truth behind that moniker, with more pastel half-timbered houses here than you can shake a selfie stick at.

The 16th-century architecture is a huge draw for visitors, but charm also spills over into the cobbled streets, eateries and numerous attractions in each of the city’s nine districts: Arts, Madeleine, Saint-Jean (or ‘Champagne Fairs’), Cité, Les Halles, Saint-Nizier, Théâtres, Canal and the Old Jewish Quarter.

Particularly worth seeing are the many places of worship scattered throughout. The Roman Catholic Cathédrale Saint-Pierre-et-Saint-Paul is perhaps the most famous, being a national monument and the official seat of the Bishop of Troyes. It’s a truly arresting Gothic structure, boasting sublime stained glass windows – yet another reason the city lives up to its colourful title! In the Madeleine District, meanwhile, the Rashi synagogue presents an alternative experience, honouring the historic rabbi and scholar who called Troyes his home.  For more information, visit en.tourisme-troyes.com 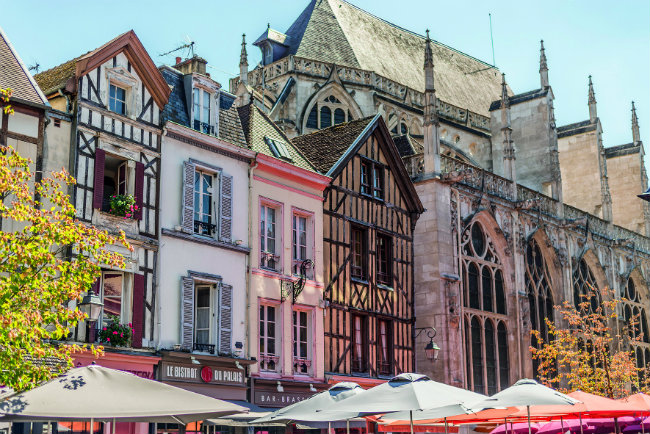 Ruelle des Chats: Supposedly, the ‘Alley of Cats’ earned its name from being so narrow that felines can spring between rooftops. The inwardly-leaning buildings certainly seem intimate, but there’s more to this old passage – it’s also the place to go for hidden treasures. Souvenir hunters needn’t look further than L’Angelot, a specialist boutique selling such gifts as stones and incense. There’s even a clairvoyance service!

Lili: In the heart of the city, a bronze lady sits on a bench, legs crossed, pensive face peering out from her sun hat. Look a little closer and you’ll notice the book open on her lap, about the Counts of Champagne no less… perhaps she dreams of romance? This is Lili, a sculpture made by Andreas Lapis in 2012. Her gaze falls upon the Hôtel-Dieu, where the lili rosa (or ‘rose bush of love’) blooms. 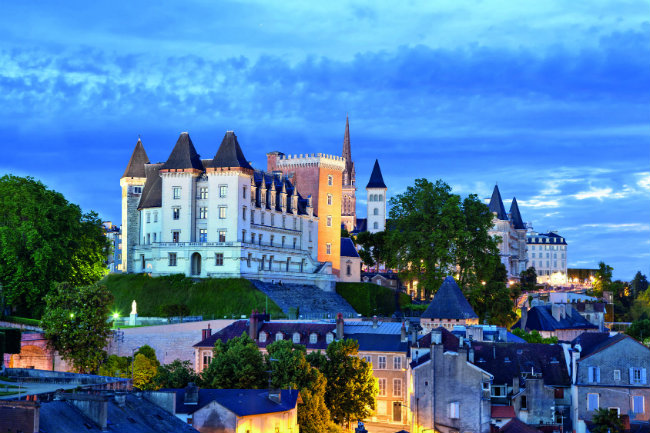 Characterised by its wild, mountainous surroundings, Pau appears as if it were plucked from a fantasy. However, the capital of Pyrénées- Atlantiques is very much rooted in French history and, with its surviving Renaissance features, it doesn’t take much to imagine this ancient royal city in its heyday.

At its core, the castle is Pau’s main attraction. In the 1500s, it was the birthplace of King Henry IV, first monarch of the Bourbon Dynasty. Today, the château is a national museum housing artwork from its former King’s reign, including an impressive collection of tapestries. Owing to its historic significance, interesting displays and dominance of the cityscape, it’s top of the itinerary for most visitors.

Another worthwhile attraction is Pau-Gelos national stud farm. It was established in 1808 by none other than Napoleon I to house military stallions and is still used to breed horses, from Anglo-Arabs to Landais ponies. Not only is there ample opportunity to see the fine draft, blood and sport stallions living here, but guests can also view the traditional carriages from the 19th century. For more information, visit www.pau.fr. 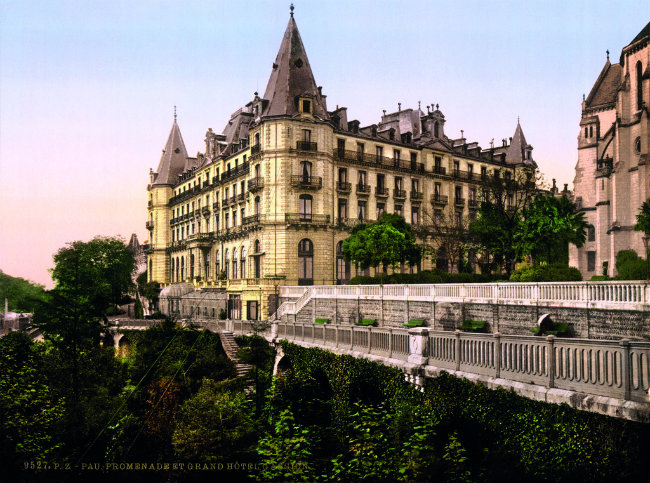 Funiculaire de Pau: The funicular railway is a charming moyen de transport and, in the city of Pau, a free one! Train cars ferry passengers from the railway station itself to the higher-up Boulevard des Pyrénées and vice versa, making for a pleasant (albeit rather steep) excursion. Reportedly, it carries around 500,000 passengers a year and has been known to transport 5,000 people in a day at its peak.

Boulevard des Pyrénées: Originally commissioned at the behest of Napoleon I, this is the place to go for views of the Pyrénées mountain range. There’s nothing quite like strolling along a tropical-coloured avenue lined with shops and palm trees, only to cast your eye to the backdrop of snowy peaks in the distance. It is truly a dreamlike clash of worlds. 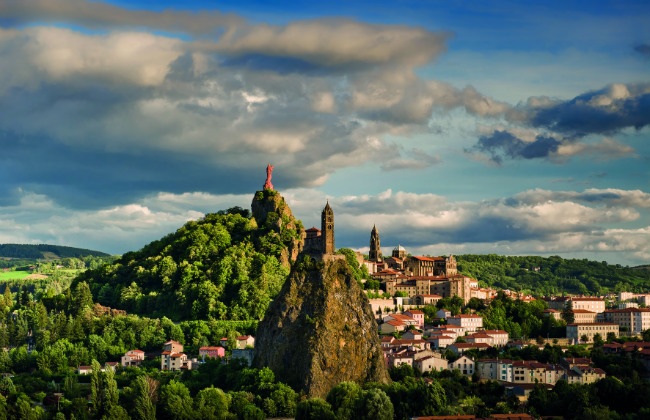 The sprawling city of Le Puy is part of an astonishing landscape. Plateaus and valleys create staggered layers of architecture, with the unmissable Virgin Mary perching atop the highest point at 2,500 feet. Opposite her, another volcanic crag juts skyward, seating the Saint Michel d’Aiguilhe chapel. Between these guardian-like monuments, the city possesses an irrefutable air of sanctuary.

Descending to street level, there’s a broad choice of restaurants, shops and museums to while away the hours. One of the most popular pastimes is the Hôtel-Dieu, a former hospital turned musée interactif focusing on the area’s heritage. The Saturday market in Place du Plot is another favourite among visitors, offering a delicious assortment of local cheeses and agricultural produce.

First and foremost, however, Le Puy is a religious city deeply rooted in Catholicism. Its religious sites are plentiful, from the hilltop chapel to the Shrine of Saint Joseph. Most outstanding of all is its cathedral, a centre of pilgrimage close to the Notre-Dame de France statue, with an impressive sandstone and breccia façade. For more information, visit www.ot-lepuyenvelay.fr 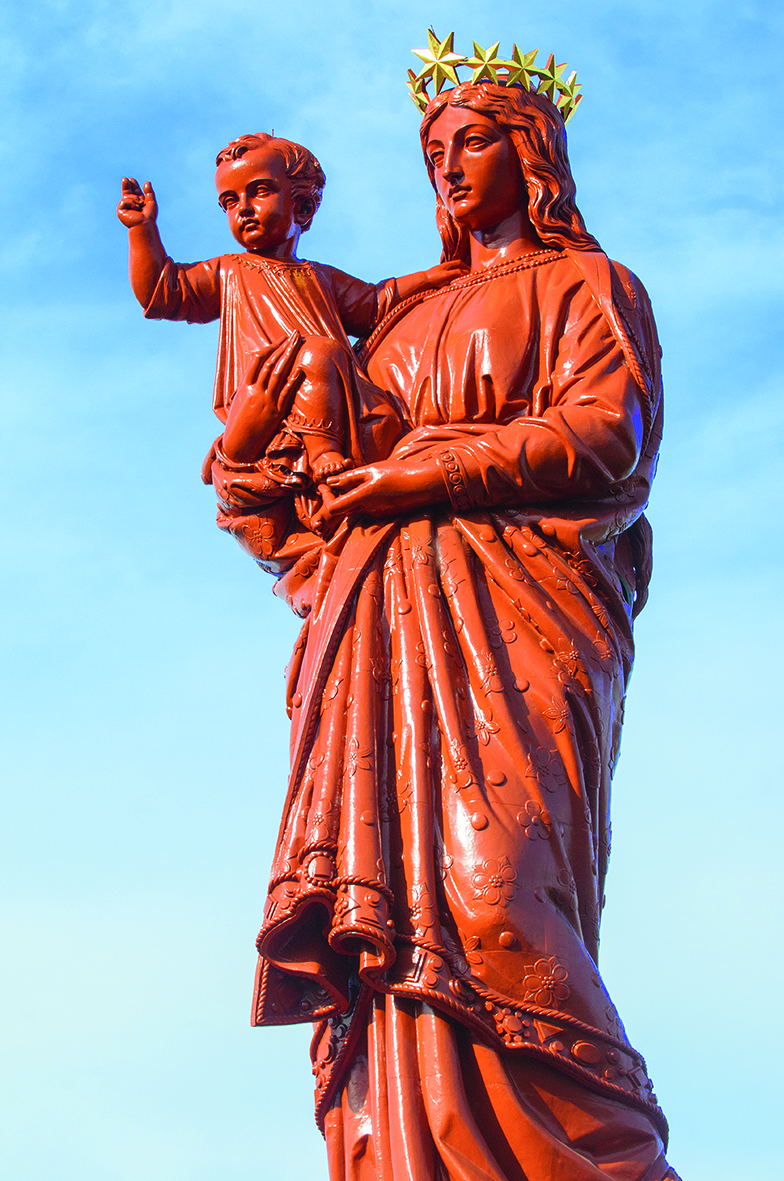 Lady of Le Puy: Shining earthy red in the sunlight, she’s a vision of exquisite craftsmanship and detail, right down to the folds of her cast-iron skirt. The Virgin Mary and child inspire awe, but equally enticing is their incredible view of the city below.

Verveine duVelay distillery: The verbena-based liqueur Verveine du Velay hails from Le Puy, tracing back to the mid-1800s. Fans of the beverage (or those who are curious) can take a behind-the-scenes tour of the distillery for a mere €6.40. www.verveine.com

Bobbin Lace Learning Centre: Le Puy has a long history with lace. Legend has it that the fabric was created here in the early 1400s and the valuable art continues to this day.  www.ladentelledupuy.com 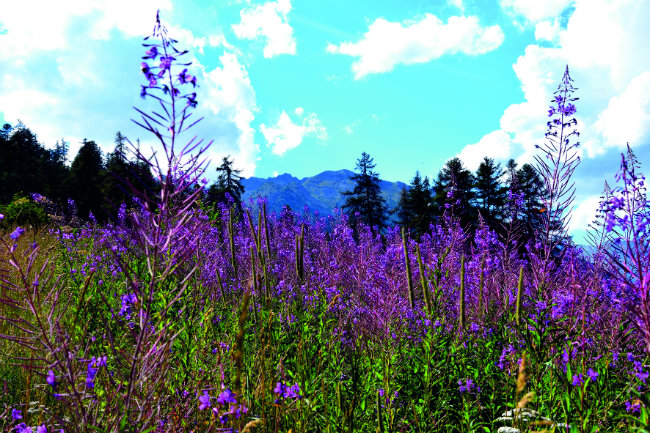 Take respite in your surroundings at this Alpine resort. Photo: J Boure

As the race neared its end, competitors passed through the ski resort of Serre Chevalier before departing the next day from Briançon at Stage 18. In July, the land is a far cry from the snowy pistes for which it’s known, instead swathed in luscious forests and wild flowers.

This mountainous getaway offers as much leisure as it does sporting opportunities. The thermal spa is the first place to head, with a choice of jacuzzi, indoor and outdoor pools, scrubs, water massages and various other luxury beauty treatments. Then, of course, there’s the soothing magic of Serre Chevalier’s landscape itself. Majestic Alpine peaks, floral meadows and lungfuls of clean air all make for an intoxicating brush with nature.

Within the valley are several villages and hamlets. Especially worth visiting is Briançon, a Tour de France stop and fortified UNESCO World Heritage Site dating back to the 17th century. For a slice of local history, climb up to the precipitous Fort du Randouillet; here you can delve into the town’s defensive past and enjoy breathtaking 360° views as a bonus. For more information, visit www.serre-chevalier.com 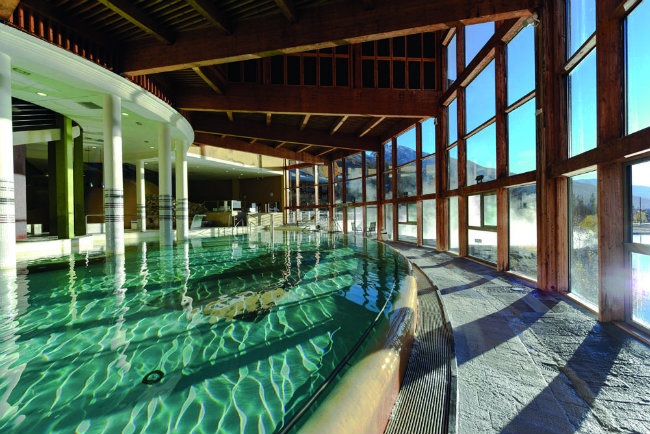 Le Chalet Hôtel de Serre Ratier: In summer, this hotel is the perfect base for adventure. Surrounded by hiking trails and accessible by gondola lift or forest road, it’s a rural escape in the truest sense. chalethotel-serrechevalier.com

Au Plaisir Ambré: This gourmet restaurant in Briançon promises a quality dining experience, having earned its ‘Bib Gourmand’ accolade this year. The menu includes such treats as foie gras, quail egg and veal from the Alps. www.auplaisirambre.com/en

Chambéry: A couple of hours away, the attractive city of Chambéry is another marker on the Tour de France map, dripping with charisma, history and culture. www.chambery-tourisme.com