Travel to Salon-de-Provence, Where Nostradamus Lived and Died 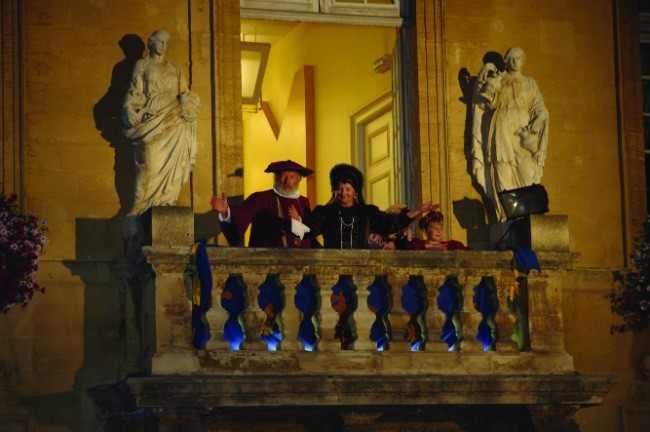 Salon-de-Provence isn’t a major tourist destination. The high-speed TGV snubs the historic town and the voitures rushing to the coast have no time for it. Yet Salon deserves better. Huddled at the foot of the Château de l’Empéri, this tiny vieille ville has plenty to offer the inquisitive traveller, and the view of the town from the steps of the 9th-century castle is exquisite. Whether you meander through Salon’s streets or settle on a café’s terrasse, to watch life pass by at a nonchalant pace, you’ll enjoy this patch of quintessential Provence – the song of its fountains, the sight of pétanque players underneath the plane trees…

Each Wednesday, an open-air market provides a riot of colours across the entire town centre – drivers take note! And don’t miss visiting the Quartier des Savonniers, a wealthy neighbourhood which prospered from trade in the famous ‘savon de Marseille’ during the late 19th century.

Nostradamus lived his last 19 years in the town, passing away on July 2, 1566, yet remains a worldwide celebrity, one who attracts visitors to Salon from as far afield as Japan and California. He’s also a local hero, having helped his friend Adam de Craponne finance the canal that, to this day, supplies Salon with water from the Durance River.

The grateful town named both a street and a boulevard after him, and the Place des Centuries takes its name from his Prophecies (1555), which he organised in groups of 100 quatrains. Nostradamus is immortalised by two statues, on the Place de Anciennes Halles and at the Cours Charles de Gaulle; there’s a huge mural of him at the Place Saint-Michel; within the grounds of the Château lies Le Jardin des Simples, a celebration of the medicinal plants he used; and his portrait even hangs in the Hôtel de Ville’s Salle des Mariages.

On the last weekend of June, everyone’s out on the streets in period costumes, to reenact his meeting with Catherine de Médicis, of which more later. In case you crave more, Salon now has a new event, the Festival Nostradamus, which was launched last March. The first festival ended with a screening of Pascal Lacroq’s documentary film relating the story of Nostradamus’s life.

I headed first to nearby Saint-Rémy-de-Provence, where Michel de Nostredame was born on December 14, 1553 – or apparently on December 24, according to the Gregorian calendar now in use. His father, Jaume, was a notaire and two of his great grandfathers physicians, the latter allegedly to King René. This enlightened environment exposed the boy to the Humanistic values of the Renaissance and encouraged his quest for knowledge. Saint Rémy also has a Rue Nostradamus, and a fountain – which first featured a likeness of Louis XVI! – surmounted by his bust.

Back in Salon, the family house still stands on the Rue Hoche, although it’s a pale shadow of the spacious Renaissance townhouse of Nostradamus’s childhood, which stood against the rampart, above a vineyard owned by the church. The family was probably chased to Provence from Spain due to their Jewish faith, although the broken rouelle (turret) on their coat of arms attests to a subsequent conversion to Catholicism, following which they were no longer required to wear the circular badge imposed on Jews. The vineyard below the family home led to the boy’s interest in plants, while the starry skies of Provence – later painted by Van Gogh during his stay at the nearby Saint-Paul de Mausole asylum, which is open to visitors – led him to astrology.

His adult home in Salon, which he shared with his second wife, Anne Ponsard, a local widow by whom he had six children, is where Prophecies was written and it’s now the La Maison de Nostradamus museum. Since none of his possessions have survived, the museum offers a 40-minute son et lumière (sound and light) show featuring ten scenes which shed light on the real man and his legacy, dispelling the wacky myths that surround him. Serious researchers will find a gold mine in the nearby Centre Nostradamus, where his archives are kept.

A ‘Renaissance man’ par excellence, Nostradamus graduated in the humanities at Avignon, and in medicine at Montpellier – as did his fellow doctor, Rabelais. In concocting his own medicines, he aroused the wrath of the apothecaries, and likewise of the Inquisition when he befriended a member of the Reformation. Nostradamus’s interest in the virtues of plants led to his first published work, Traité des Fardemens et des Confitures (1555), a recipe book of jams and cosmetics which would today qualify him as a wellness doctor. The popular almanacs which followed secured him a revenue to support his family. However, combatting the plague throughout France became his mission in his middle years – promoting good hygiene way before Pasteur.

His involvement in astrology also stemmed from a desire to serve others, hence the decision to change his name to Nostradamus, meaning ‘we give what is ours’ and also referring to the transmission of knowledge. His predictions were cryptic, possibly to escape the wrath of the church, and many different interpretations have been made of them. Whether he really predicted the accidental death of Henri II is conjecture yet the king’s widow, Catherine de Médicis, believed so with a passion. She invited Nostradamus to Paris, showering him with privileges and honorary titles. In February 1564, during her travels through France, she detoured to Salon to meet him, accompanied by the young Charles IX, the future Henri III and Henri IV, their entire court and 7,000 horses – this event is reenacted each June.

Nostradamus passed away 16 months later, allegedly having predicted his own death. His tomb at the Couvent des Cordeliers in Paris was desecrated during the French Revolution and his remains now rest behind a plaque in Salon’s Collégiale Saint-Laurent – its opening hours can be erratic so you should check before setting out to pay your respects.

Want to discover the real Provence? Join France Today on our authentic yet intimate tours of Provence

Previous Article French Catalonia: What to Do and Where to Stay in Collioure
Next Article The Getty Museum Presents “Woven Gold, Tapestries of Louis XIV”