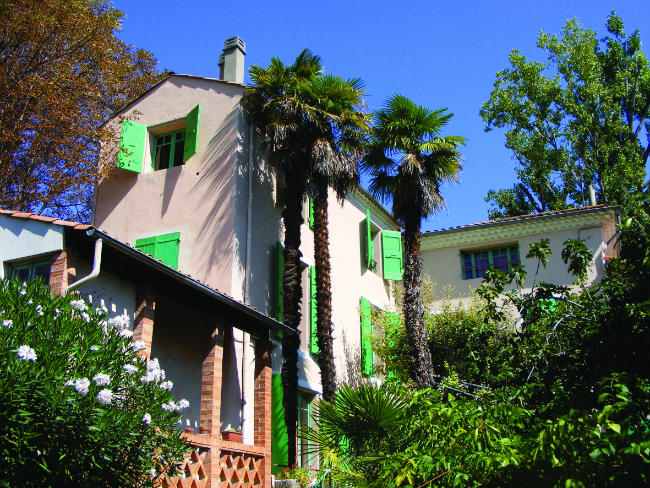 Le Paraïs, the home of writer Jean Giono in Manosque, is open only on Friday afternoons and only by appointment. Don’t let this deter you, for this is both a Provençal haven and a book lover’s heaven. I guarantee you are in for a treat. Nestling at the foot of the Mont d’Or, the place is a joy to the eye and has the feel of a lived in home – perhaps because Giono’s daughter Sylvie lived here until recently? There was even a cat hanging around, like in Giono’s days, when cats and dogs were part of the household. Note that an English-speaking guide can be pre-arranged when you book your appointment.

It was the success of his first published novel, Colline (1929), that enabled Giono to buy Le Paraïs the following year, a much smaller place then, and only the kitchen had running water. Here he settled his entire “tribe” – wife Elise, daughter Aline, mother, grandmother, mother-in-law, uncle, and new-born Sylvie – in 1934. The garden too was much smaller: “A palm tree, a persimmon, a pond the size of a hat, 50 grapevines, a peach tree, an apricot tree, an oleander, a patio; and here we all live together.” Encouraged by the success of Colline, he resigned from his job in the bank for a writing career, with hindsight a judicious gamble, given that he became one of the great writers of 20th-century France. Giono lived in Manosque all his life and his entire work is immersed in the area. His journey to Italy, his paternal homeland, was a one-off expedition, while travelling to Paris as a member of the prestigious Goncourt Academy was a drudgery. Yet he did travel through his imagination, which was fired early on by his father, a shoemaker by trade and a born storyteller. This was followed by the discovery of world literature (the Ancient Greeks, Virgil, Shakespeare, Don Quixote…) offered by the publisher Garnier for 90 centimes per volume and devoured under the olive trees of the Mont d’Or. There was no need to travel to Greece when her gods could pop up in Haute Provence, double-natured Pan first and foremost, who inhabited the nearby mountain of Lure, adding a dark, violent dimension to Giono’s Provence. I went hiking there with Jean-Louis Carribou, who stopped periodically to read from Giono in situ, an experience open to all through the Friends of Giono Society. There is something organic about Le Paraïs. It grew and mutated over the years, which is why it is so delightfully alive. Extensions were added, partitions demolished, rooms changed their function. All the while Giono travelled within its walls, shifting his study from one corner of the house to another, accompanied by three pet objets that are still on display: the Chinese painting of the Mongolian Horses, a 16th-century wooden angel attributed to Pierre Puget’s workshop, and a stone head from a Romanesque chapel. He started out with just a table next to grandmother’s bed above the kitchen. In 1932 he had a separate bungalow built next to the main house where he could work undisturbed. Jean le Bleu was probably written there, a largely autobiographical book and a great introduction to the writer. the watch-tower of the Mont d’Or.
photo: Thirza Vallois

The two houses were joined by a new wing in 1935, where he set up a library and study. The mural painted by his friend Lucien Jacques is still there, immortalising the family at that point of time. The adjoining terrace was where everyone gathered round the table during the six warmer months of the year, listening to Giono’s stories or to Vivaldi and Mozart on 78s. A View of Manosque

Giono’s next refuge, “le Phare” (the Lighthouse), is described in his novel Noé, a bare room on the upper floor affording a view of Manosque on one side, the Durance valley and the Valensole plateau on the other. Giono stayed there till 1947, including the years of the war, when he was wrongly accused of collaboration and twice spent time in jail. In 1951, Le Hussard sur le toit (The Horseman on the Roof), written in the cosy study he set up in 1947/8 in the attic of the old house, would be his revenge. Using his pen as a scourge, he set out to inflict cholera and death on the people of Manosque, save for his hero Angelo, who had been wrongly accused of poisoning the fountain of the town. In 1965, declining health obliged Giono to move downstairs, where he never ceased to write. On the evening of 8 October 1970, he left the study for the last time, before departing that night “for a larger world” as his daughter Sylvie put it. Above all, Le Paraïs is a shrine for the celebration of books. Giono’s superb library, miraculously undispersed, still lingers in my memory, some 8,000 assembled lovingly over 50 years. Some were offered by fellow writers and admirers – André Gide, Cocteau, Heidegger, T.S. Eliot, Henry Miller and many more. Shelves and shelves of world literature, but also history, geography, natural science, philosophy. Most are annotated by Giono’s hand, telling us miles about his erudition and insatiable curiosity – 120 volumes are devoted to Stendhal alone, his most admired author, with William Faulkner. Melville too – prompting him to undertake the arduous task of translating Moby Dick. I was struck, however, by the conspicuous absence of women writers, including his contemporary Virginia Woolf; unless I missed something. A manuscript by William Faulkner, one of Giono’s favorite writers. Photo: Thirza Vallois

There is a collection of nib pens on Giono’s desk, and samples of his handwritten manuscripts. Books were more than content. Giono cherished their sensual quality, the feel of the paper grain, the bindings, the typography. He found it jubilating to dip his pen in the thick, black ink and run it on the yellow page, “Je ne veux pas écrire bien,” he said. “Je veux écrire beau,” referring to the beauty of the handwritten word, something to meditate upon in this age of email and ebooks. Giono at “Le Phare,” a bare room on the upper floor of the house.
photo: Association des Amis de Giono