Inside Lascaux 4: A Full-Size Replica of the Famous Cave 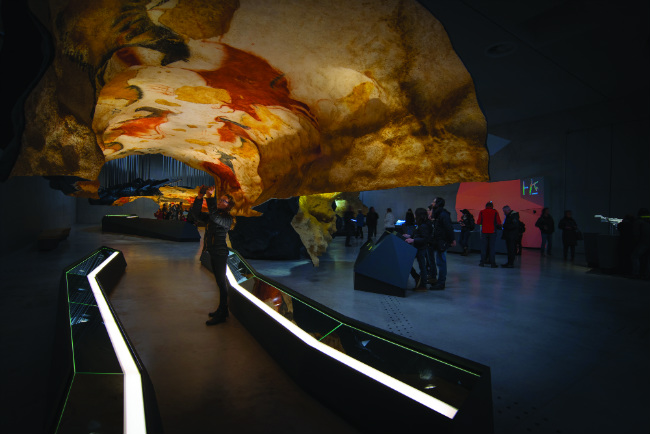 In September 1940, four French teenagers made a unique discovery in the gently rolling countryside bordering the Vézère: a subterranean cave lavishly decorated with paintings 20,000 years old. Even in wartime, word soon spread. Listed as a Historic Monument just two months later, Lascaux was opened to the public in 1948, but over time the increase in humidity brought in by visitors caused algae to form. The paintings began to deteriorate and, in 1963, the door in the hillside was closed to all but a few experts.

Now, however, visitors can once again experience the wonder of Lascaux, thanks to a full-scale replica of the cave, which opened in December 2016. Created with state-of-the-art techniques and perfect to every last nook and cranny, it’s the focal point of the International Cave Painting Centre, which sets out to connect 21st-century visitors with their ancient ancestors.

I’ve been lucky enough to see original cave paintings in the Dordogne, Lot and the Pyrénées, so I was curious to see how I’d feel about a replica when I arrived for a privileged preview, just one week before inauguration by the outgoing president, François Hollande.

The shape of the Centre reflects the relief of Lascaux hill behind, its soft broken roofline contoured like a horizontal fault. As our small group approached the low-level building, men with machines were still tilling bare soil destined to become lawns and pools and, across the grassless park, the small town of Montignac waited in nervous anticipation for the world to arrive.

“Local people have been understandably concerned about the volume of visitors,” admitted the director, Guillaume Colombo. “But when we invited them for a preview last week, they understood completely what we are trying to do and loved it.” 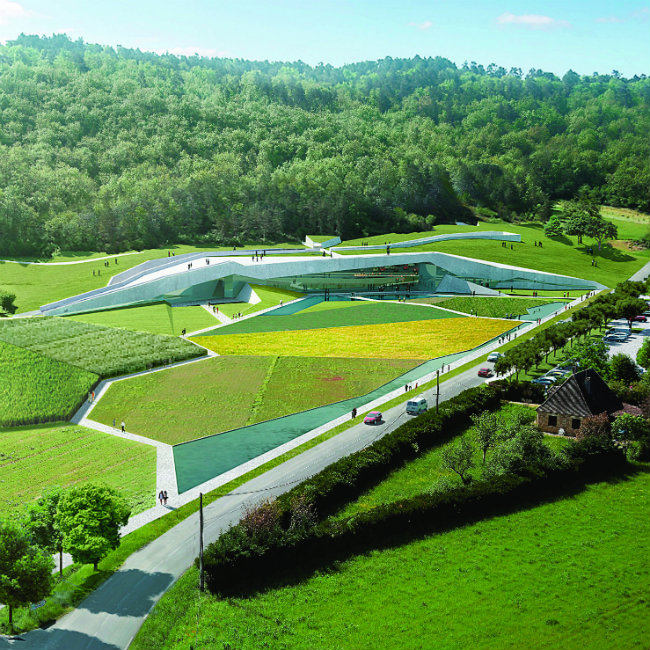 Many ancient artefacts have been recovered from the cave, but the International Cave Painting Centre is not a museum collection. The interior of the Lascaux cave has been painstakingly recreated, millimetre by prehistoric millimetre, with access by guided tour only, in order to ensure the most authentic experience possible. Groups set out every six minutes, so prebooking is advisable.

But there’s lots more to enjoy at your own pace in the interpretation area, facilitated by the latest in electronic wizardry. A multi-media tablet with headset provides additional background and insight with separate commentaries for adults and children, activated at key points throughout the Centre.

“We think of ourselves more as facilitators and companions than guides,” our tri-lingual guide, Dhyana, revealed as we took the lift to the roof to start our time-travel adventure. “We want visitors to feel the atmosphere of the cave and form their own opinions about the meaning of paintings.”

So in the spirit of authenticity, the magic pads don’t work inside the cave. You can, however, activate them on the plant-covered roof if you want to see the prehistoric sites of the Vézère mapped out before you. Then it’s off on a virtual journey in the footsteps of the teenagers. The Discovery Path leads gradually downhill between the lee of the hill and the untreated concrete ‘strata’ of the Centre. 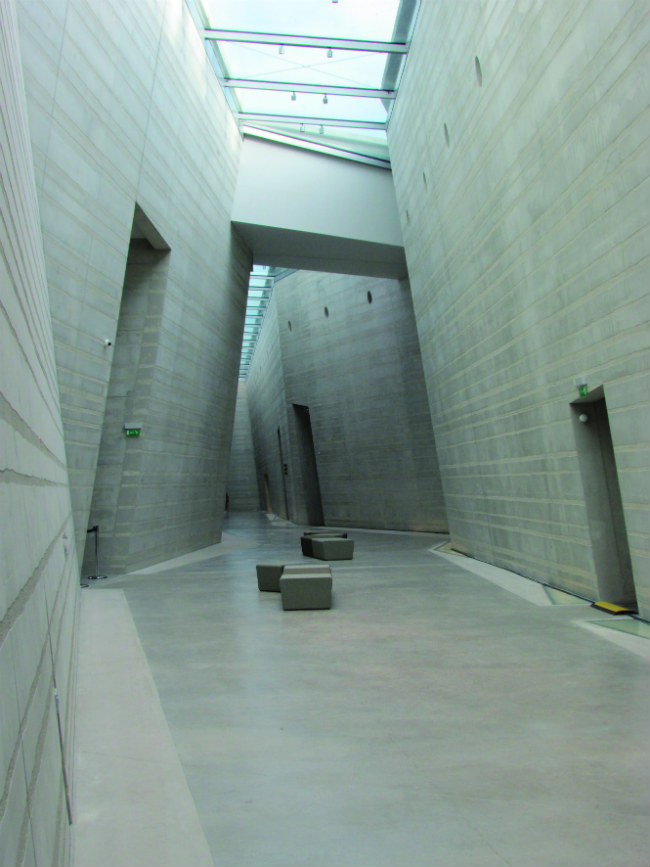 On the way, you’re encouraged to think why Cro-Magnon man chose to come here rather than to the cluster of prehistoric caves some 20 kilometres away at Les Eyzies-de-Tayac. Lascaux, it seems, was prehistoric paradise to people with brains similar to our own. They were good at making clothes, carving flints and hunting animals, and as the earth warmed up after the Ice Age, this tundra landscape teemed with food on the hoof.

Close to the end of the Discovery Path, a film recreates the Palaeolithic landscape before visitors pass through a door and into darkness. One more door and suddenly you’re inside the cave, standing at the bottom of a pile of rubble and looking up at a replica of the small hole that admitted the boys in 1940. Visitors are promised the humidity and smell of the original cave and, although these sensory experiences weren’t in place for my preview, I was stunned at the ‘cave’ stretching before me. 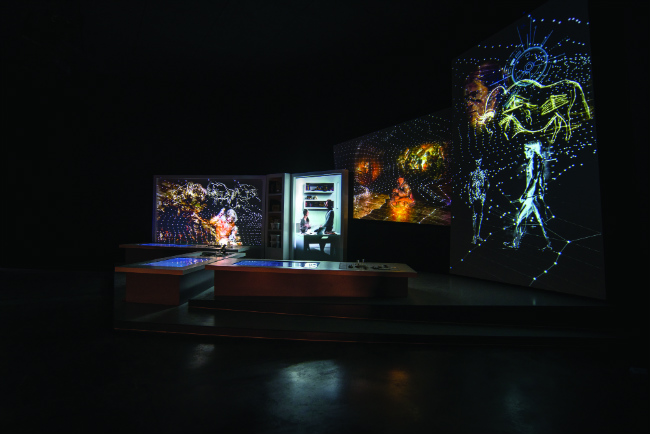 Looking at the huge animals pounding across the walls, I instantly forgot this was a replica. Walking in wonder through the Bull’s Chamber and the Axial Gallery, the Apse and the Nave, I found myself bewitched by bulls standing face to face, bison standing back to back, and a frieze of stags, their heads seemingly held above water. Every new image implied movement and noise: a line of five trotting ponies, those enormous horned bulls, and a tumbling horse, ears pointed back in alarm as it toppled into infinity.

The rich tones of russet, brown and black, along with the size and number of images, is what sets Lascaux apart from other prehistoric caves. And every step raises a new question. Why do some animals overlap whilst others stand apart? How many artists worked here and for how long? And above all, why?

With paints made from natural minerals, dating is impossible, but pigments are known to have come from Bergerac, some 45 minutes away today by car. With no natural light, the caves were clearly not inhabited but must have had spiritual signifi cance – the artists using a ladder to reach the highest points. Even more curious are the paintings found down a shaft, the top of the void visible in the replica as in the original cave, but not accessible. 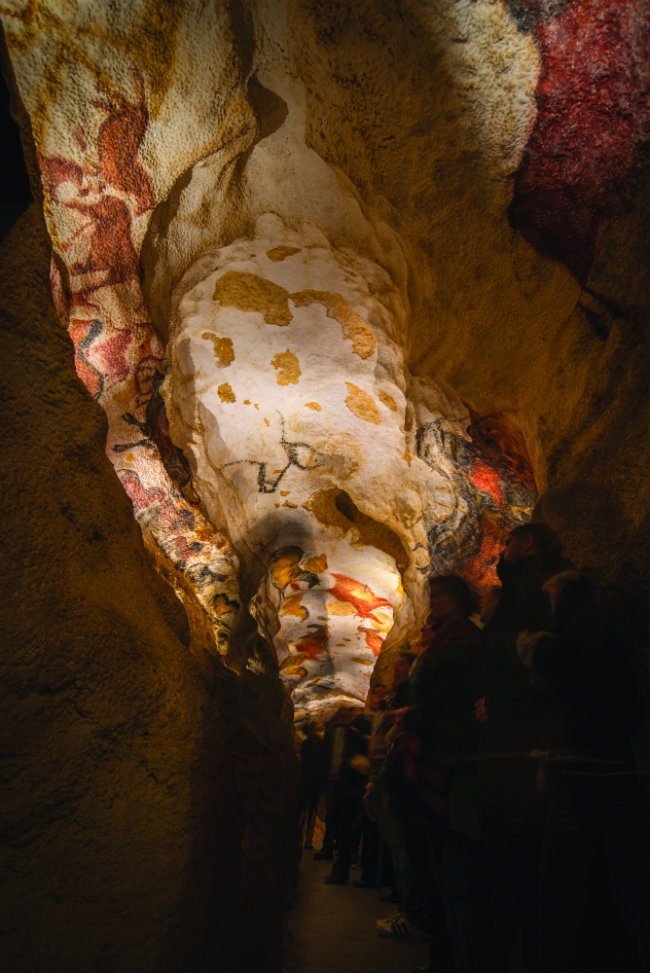 But one of the real beauties of this outstanding reproduction is that the treasures found in inaccessible areas can now be viewed in the Workshop. Here, faint engravings are highlighted in ultra-violet light and the only portrayal of a man – a strange elongated figure with a bird’s head – can be seen at close quarters. But what story is told by the grouping of the man alongside a bird, a bison and a rhino? And what’s the meaning of the strange geometric figures scattered amongst the animals? We may never know.

Elsewhere in the discovery areas, changing attitudes to prehistoric cave paintings are illustrated in the Theatre of Parietal Art, three multi-media displays spanning the 19th century to the present day. And the digital Gallery of the Imagination enables visitors to create a personal exhibition of artworks that have been inspired by prehistoric paintings. What’s more, you can take the Lascaux experience home with you by having your artistic choices sent to you by email, along with other resource material for home study.

As I left the exhibition space for the bright light of the shops and café, I found three words echoing round my head from the 3D film that puts Lascaux in the context of cave art from around the world. It finishes with the question ‘Qui sommes nous?’ Who are we? A visit to Lascaux will make you wonder. 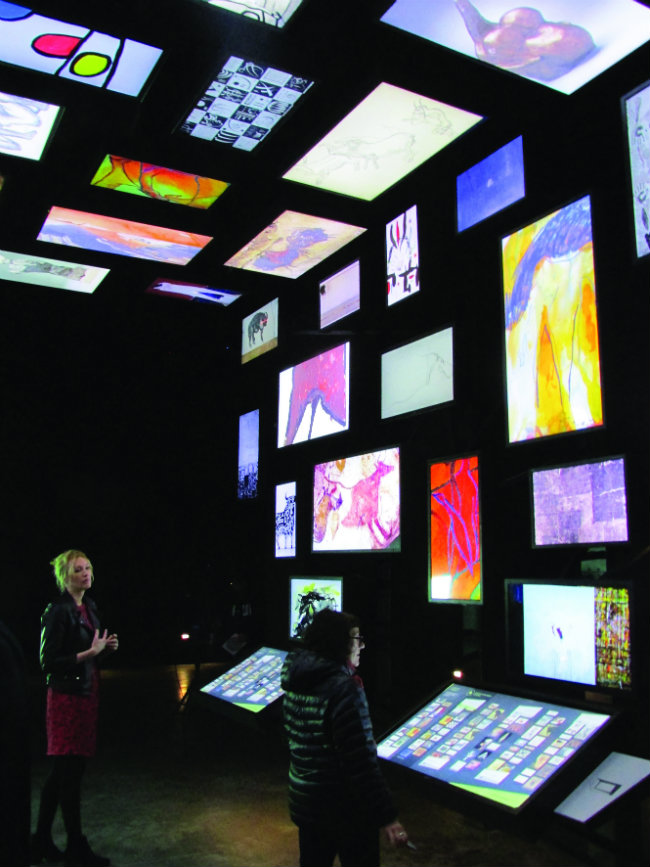 Lascaux is four hours by car from Paris and 45 minutes from Périgueux, Sarlat and Brive-la-Gaillarde. The nearest airports are Bergerac and Brive-Vallée. By rail, head to Périgueux, Brive-la-Gaillarde or Condat-le-Lardin. For details of The International Centre of Cave Art, visit www.lascaux.fr and www.projet-lascaux.com. Tourist information from www.visit-dordogne-valley.co.uk, www.enjoydordogne.co.uk, www.tourismecorreze.com and www.tourisme-lot.com.

Montignac has only one small hotel, although a boutique hotel will open this summer and a 100-bedroom hotel is planned. Most visitors are expected to stay within an hour’s drive and visit for the day.

In Périgueux city centre, Hôtel Mercure www.mercure.com is just minutes’ walk from the historic old town centre and Saint-Front Cathedral. Or try Le Miel des Muses B&B in the heart of Brive-la-Gaillarde for spacious, contemporary accommodation in an old ironmongery. Something in the country? La Bruyle offers a cosy rural atmosphere in Saint-Michel-de-Bannières near medieval Martel with table d’hôte dinner available on reservation.

Just outside Montignac, Le 4 is a well-established restaurant which changed its name to reflect the new Lascaux 4. Good, hearty regional fare in oak beamed dining room with brick replace. Tel: +33 5 53 51 86 92 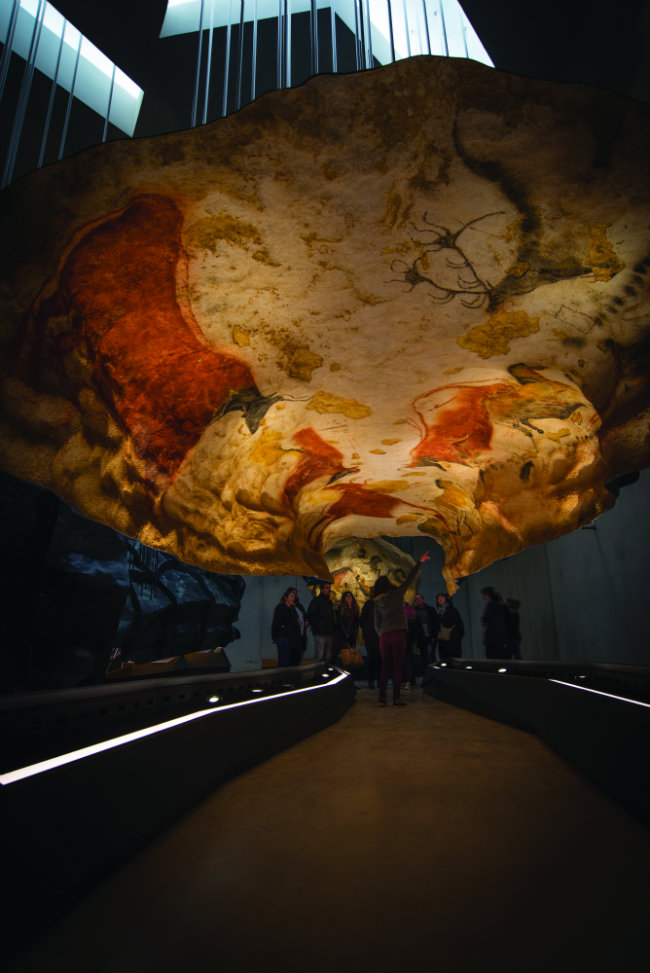 Background to a Legend

The adventure began on September 8, 1940. 18-year-old Marcel Ravidat was walking his dog, Robot, on Lascaux hill, when his pet disappeared down a hole. Four days later, he went back to explore with three friends. Crawling inside the dark space with lamps, they saw nothing at first, but then the dim light revealed huge bulls painted on the walls.

The four boys initially made a pact to keep their find a secret, but Simon Coencas, now 90 and the only surviving member of the group, admits that he couldn’t resist telling a friend. News spread and the boys returned with a trusted teacher, Léon Laval. Discovery authenticated, the cave was soon dubbed the ‘Sistine Chapel of Prehistory’ by Palaeolithic art specialist Henri Breuil.

Marcel Ravidat became one of the first guides and it was him who noticed the unwanted arrival of the algae. So, in 1963, André Malraux, Minister for Cultural Affairs, announced the closure of the cave, which then became listed as a UNESCO World Heritage Site in 1979.

In 1983, a replica of the Hall of the Bulls and the Axial Recess was opened inside the hill, not far from the original. Dubbed ‘Lascaux 2’, it will remain open for group visits and themed tours. A touring exhibition, Lascaux 3, was launched in 2012 to take Cro-Magnon art to all corners of the 21st-century world. It will tour Japan in 2017.

The painstaking reproduction of the interior was carried out by the Périgord Facsimile Workshop (AFSP), based in Montignac, using a patented technique called ‘stone veil’. The team of 29 people were mostly fine-art painters but also included resin sculptors, moulders, locksmiths and welders. AFSP had already been involved in the restoration of Lascaux 2 and the creation of the Lascaux 3 touring replicas. www.afsp-perigord.fr

The International Cave Painting Centre has been an international collaboration, the building designed by Oslo-based Snøhetta with additional support from French architects. London design agency Casson Mann brought their experience of working with international museums and visitor experiences to the scenography, the second large-scale project they completed in France in 2016 after Bordeaux’s Cité du Vin.

Previous Article Book Reviews: How to Read Paris, by Chris Rogers
Next Article A New Graphic Arts Wing at the Domaine de Chantilly