Made in France: The Opinel Knife Celebrates 125 Years 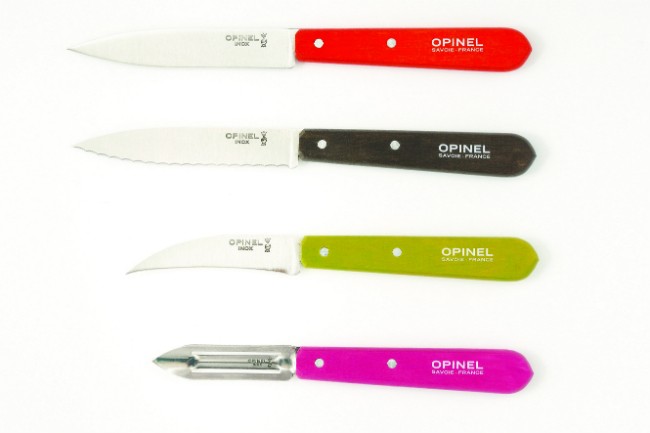 An exhibition of the 100 best-designed objects in the world, held at London’s Victoria and Albert Museum in 1985, placed the Opinel ‘No 8’ knife right up there with a Rolex and a Porsche. That isn’t bad for an item which only consists of five separate parts, costs less than a mid-range bottle of wine and – except for the addition of a blade lock in 1955 – has remained pretty much unchanged since its creation in 1890.

A sharp carbon blade which folds neatly into a curved wooden handle – that’s it. Practical, utilitarian, sturdy, portable, lightweight and ergonomic, the Opinel knife is what the French would call incontournable, something essential to the Gallic way of life. In contrast with the Swiss Army Knife, the classic Opinel only does one thing, but exceptionally well, and its streamlined design can’t be improved upon.

Doubtless the V&A’s curators had all this in mind, yet despite its elevation to ‘museum piece’, the Opinel is about as democratic as practical design gets – it’s as useful for opening oysters and slicing saucisson as it is for severing a fishing line or cleaning under fingernails. For the French, the knife’s modesty is part of its appeal and, like a corkscrew, its ubiquity renders it almost invisible – everyone owns at least one. Pablo Picasso sculpted with an Opinel, why wouldn’t he?

Many a French citizen remembers their first Opinel. Laid out in graduating sizes at hunting or outdoor shops, the knives were catnip for boys, who would save up to buy several. Taking care of the carbon steel blade, which holds its edge very well but rusts easily, taught teens the responsibility of caring for essential tools. Kept in the kitchen or a toolbox, Opinel knives cut vegetables, trimmed clotheslines and pierced new belt holes. Tossed in a basket or case, they served as an essential part of countless picnics and holidays.

Opinel’s rags-to-riches story begins in 1800, when Victor-Amédée Opinel, a peddler who had learned the art of forging nails during his travels, set up shop as a blacksmith in a tiny hamlet, high in the mountains of France’s Rhône-Alpes region. The business did well enough that Victor-Amédée’s sons and grandsons worked at the forge, expanding the business and slowly incorporating the latest machinery and tool-making technologies.

One grandson, Joseph Opinel, showed talent and ingenuity from the start. In 1890, aged 18, machine-crazy Joseph built his own camera and photographed local events and marriages. At the same time, he tinkered on the machines in his father’s shop, spending hours crafting and refining a wood-handled knife that he could carry in his pocket.

Joseph’s invention was an instant hit with local farmers, winemakers and shepherds – anyone who could use a lightweight knife which was sharp so it could get the job done, not easily broken and compact enough to fit handily in a pocket or pouch. Opinel’s knife fit the bill.

Building on his home-grown success, Opinel crafted the knife in a dozen sizes, which he handily numbered 1-12. These ranged from the tiniest model, just a few centimetres long and featuring a ring so it could be hung from a pocket watch fob, to a model with a formidable 12cm blade.

The success of his knife emboldened Opinel to take the first step toward mass-production. Construction on a new factory close to the family blacksmith business, in nearby Pont de Gévoudaz, began in 1901. Opinel streamlined the manufacturing process, bringing in electricity – he was the first in the area to have it – and designed and built his own machinery to quickly and easily produce the lightweight beechwood knife handles.

Joseph also proved a canny promoter. He hired peddlers to hawk the knives and opened a shop near the closest railway line, at Chambéry, a stroke which sealed his fate. Effectively, railway workers distributed Opinel’s folding knife to the far corners of France, and within a few years he registered his first trademark. As was customary for all French “master cutters” since the 16th century, Opinel needed to choose an emblem, and went for the main couronnée (crowned hand). The crown was borrowed from the crest of Saint-Jean-de-Maurienne, his family’s hometown, while the latter represented the blessing hand of Saint John the Baptist. This distinctive emblem has appeared on every Opinel knife since 1909.

At the 1911 Alpine International Exhibition in Turin, Opinel exhibited his original range of 12 knives in a handsome wooden display case and also introduced table and cooking blades, cheese parers, pruners, scissors, razors and a corkscrew, all of which earned him a gold
medal and expanded his fame beyond France.

Two factories and 44 years later, Joseph Opinel, who had by then had been joined by his son Marcel, approved the first modification of his original model. In addition to the knife’s four components – blade, handle, shell ring and rivet – Marcel added a simple safety device, the ‘Virobloc’, to lock the blade in the open position. In the 1990s the Virobloc was modified to lock the blade in both the open and closed positions.

Now in its fourth generation of Opinels, the company  produced over four million knives last year and still remains true to its origins. The addition of stainless steel and a line of fixed-blade knives hasn’t detracted from the basic tried-and-true design: wood-handled, foldable and a pleasure to hold. But Opinel continues to innovate, creating new knives more adapted to specific tasks.

The gardening knives, featuring curved or serrated blades, include special models for pruning, grafting or grape harvesting. The sizeable kitchen line includes all the usual suspects for peeling, mincing, zesting, coring and any other task carried out in la cuisine de la maison, while multi-starred chef Alain Ducasse lent his imprimatur to the ‘professional’ series. For the dining room, there are handsome stainless steel knife sets with elegant laminated birch or ebony handles. There’s even ‘Le Petit Chef’ knife, a fixed-blade model which comes with a curved, semi-sharp lame, a nifty finger ring and a protector so that kids can steady their hands and learn to cut without endangering their digits. Knives can also be customised with initials or, indeed, any design that fits on the handle, for a superior French memento.

To celebrate 125 years in business, Opinel sponsored an open contest to embellish a ‘No 8’ knife, to be sold in stores and via their website in fall 2015. The winning design, sporting a beautiful mountain landscape topped by the Opinel ‘crowned hand’, was created by Mathieu Gazaix, a young French designer whose inspiration came from memories of gathering porcini mushrooms in the Cévennes and watching his grandfather spread sardines on to toast – both activities undertaken with an Opinel knife.