My Life in Paris: The Allure du Lait (and Cleopatra-Style Milk Baths!) 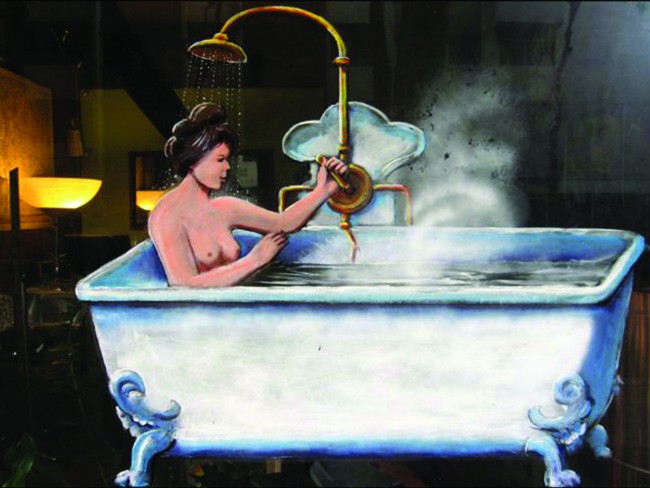 Once the plan was hatched, there was no turning back. In the tiny fromagerie, a line of shoppers snaked out the door. I was stuck. But with my market trolley boasting a 60-litre bag and Le Mans-worthy wheels, I was also prepared.

“Bonjour, Mademoiselle Cantal,” Monsieur Valentine says. He knows me well – I’m a fool for Cantal’s buttery flavour. Named for a region filled with volcanic peaks and Salers cows, even Louis XIV was a devotee of this ancient cheese.

“Bonjour, Monsieur,” I squeak, before launching into my request in timid French, one word at a time. “Milk. Please. Thirty litres. Is it possible?”

“Pardon!” the lady behind me exclaims, prodding me with her cane. However, using my tank of a shopping trolley as a bulwark, I hold my ground. Monsieur Valentine hands me a piece of creamy Saint-Jacques cheese as a peace offering, while he ponders my request.

“C’est possible? Trente litres? Impossible! Such a big order for une petite fille! Are you planning to take a bath in it, Mademoiselle Cantal? Or is it now Mademoiselle Cléopâtre?” My fellow shoppers giggle…

Indeed, Monsieur Valentine knows me very well. Stealing a page from Madame de Pompadour’s Neo-Hippocratic plan for self-enlightenment, a milk bath is exactly what I have in mind, or at least a thorough foot soaking. Making no bones about it, old beauty fads intrigue me, especially if there’s a twist in their tale. Hail that bandwagon, I say, even if the ‘passing fancy’ left the scene centuries ago. The milk bath possesses both. In addition to Madame de Pompadour, Diane de Poitiers (Henri II’s favourite) and ‘Ninon’ de l’Enclos (the Sun King’s ‘friend’) also favoured milk-based washes and cosmetics. Ninon often quipped, “If God had to give a woman wrinkles, at least put them on the soles of her feet.”

Vaudeville performer and Folies-Bergère dancer Anna Held was also a believer. In 1896, arriving in New York from Paris, she demanded that the Greenfield Dairy deliver 40 gallons of milk to her room at the New Netherlands Hotel every other day. Some 320 gallons later, Anna cancelled the order, claiming the milk wasn’t fresh enough. The company hired a lawyer to reclaim the $64 owed but settled ‘out of court’, as “milk baths were too peculiar to be discussed in public”.

Held’s manager, Florenz ‘Flo’ Ziegfeld (of ’Follies fame) held a press conference and stated that, “The milk was sour and entirely unsuited for milady’s bath – in fact, it spoiled her complexion.” Asking if they’d like to see the fetching Held in a milk bath, Ziegfeld threw open the door to her room, revealing the bubbly dancer “laving her rose leaf limbs” and chin-deep in milk. Batting her eyes, Held said, “At home in Paris I take a milk bath twice a week, but on the road it’s more difficult.”

After that, women everywhere began bathing in milk. A dairymaid in Cologne was even caught soaking in her wares– whether she charged extra for it at market isn’t known.

It later emerged that Held and Ziegfield had cooked up the whole lawsuit as a publicity stunt, but nothing was going to dampen my personal quest. Stocking up on beaucoup boxes of sterilised milk at the Carrefour supermarket, I finally took the plunge, twixt wine and cake.

Maybe it’s my imagination, but my feet do feel softer and smoother. However, I now have to ask myself whether it’s worth having every cat in the neighbourhood following me.

Oh well, as Ninon de l’Enclos said, “Novelty is the storehouse of pleasure!”

Theadora Brack moved to Montmartre in 2003 to write for the travel site Eurocheapo.com. She runs her own blog, a field guide to Paris:www.peopleplacesandbling.com