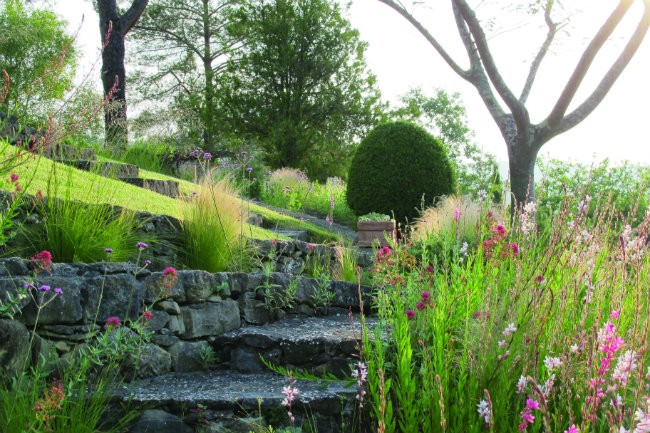 Open Gardens, or Jardins Ouverts, is modelled loosely on the UK’s National Garden Scheme (the Yellow Book), which started in 1927 and now represents over 3,800 gardens. Over the decades, the UK scheme has raised over £42 million for charities by encouraging gardeners across Britain to open their horticultural paradises to the general public for a small charge. Similar schemes exist in many countries around the world but, somewhat surprisingly, France has never operated a directly comparable national project.

June Williamson’s garden in the Ariège

Consequently, in 2013, four British garden-owners, all of whom are based in the Creuse département of the Limousin, ran a trial scheme to determine whether there was the potential to develop a full Open Gardens scheme across l’Hexagone. The gardens in question were each open for five hours on the last Sunday in June 2013 and attracted over 50 visitors.

This trial opening raised some €300, which was donated to a French charity called À Chacun son Everest (‘To Each his Everest’), an organisation founded by Dr Christine Janin, the first French woman to summit the famous mountain. The charity organises activities for children who have or are in remission from cancer or leukaemia. Its philosophy recognises the huge challenge that children with a serious illness face – it’s a most worthy cause.

Encouraged by the success of the trial opening, the Jardins Ouverts association was formed in January 2014. The target for the year was to open 12 gardens to the public for one weekend and to raise €1,000 for À Chacun son Everest. In the end, some 28 gardens participated across four départements: the . The gardens themselves were 25 per cent French-owned and 75 per cent of them maintained by British expats.

Neil and Sue Spoonley’s garden in the Corrèze

The weekend proved to be a huge success, despite the appalling weather – a total of 422 visitors (40 per cent French, 60 per cent British) paid €5 each to visit as many gardens as they wished over the course of two days. Some gardens had refreshments and plants for sale, which helped to boost the revenue to more than three times the original target. The final tally was €3,051, of which €2,500 was sent to À Chacun son Everest – the rest went towards covering expenses. A very rewarding relationship has since been established with the charity – as exemplified by a handwritten letter of thanks and congratulations from Dr Janin herself.

There are currently 75 jardins ouverts across 13 départements, and there were a number of open days in 2015. In the future, visitors will be able to visit some of the gardens throughout the year. The association expected to raise at least €8,000 for charity during 2015, the bulk of which will once again be donated to À Chacun son Everest. From 2016 onwards, as the association’s income continues to grow, we also expect to be able to donate to other worthy causes.

Neil and Sue Spoonley’s garden in the Corrèze

The purchase of an annual Jardins Ouverts membership card for the very reasonable sum of €10 allows the bearer access to all of the gardens involved with the project during the whole year. Many of the private gardens and estates involved charge €4-6 per person, per visit. However, for casual visitors, a day pass of €5 is also available.

The long-term aim of Jardins Ouverts is to become a national association and the progress of the project so far suggests that this is a realistic ambition. The original estimate was that this would take from 10 to 15 years, but with more publicity and such opportunities as exhibiting at the prestigious Courson à Chantilly horticultural event, it’s likely that this will happen sooner than expected – possibly within five years.

A major strength of Jardins Ouverts is the enthusiasm of our volunteers, who give up their time and energy to support the scheme. It’s wonderful to contemplate the possibility that France may one day have its own Yellow Book and we seek any and every opportunity to help to achieve this goal.

Do you have a garden in France which could be part of the Jardins Ouverts scheme? If so, please email Mick Moat via [email protected] or call +33 5 55 63 43 12. For more information, visit www.opengardens.eu

Previous Article Made in France: The Opinel Knife Celebrates 125 Years
Next Article Hostellerie de la Maronne: An Idyllic Place to Stay in the Cantal