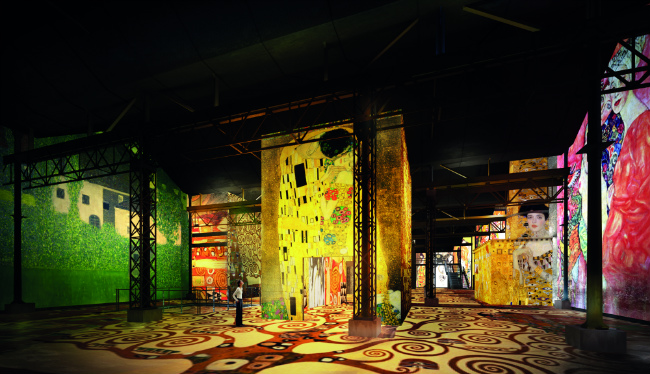 Following the success of the extraordinary multimedia shows at Carrières de Lumières in Provence, which attracts more than 600,000 visitors every year in the picturesque village of Les Baux-de-Provence, the exciting concept has arrived in Paris.

L’Atelier des Lumières, the city’s first digital art centre, has opened its doors in the 11th arrondissement in a former iron foundry (as of April 13). The new digital hub offers monumental immersive exhibitions thanks to 120 video projectors scattered across the 2,000 m2 space and a state-of-the-art sound system. The inaugural show is devoted to Gustav Klimt, Egon Schiele, and the artists of the Vienna Secession in the 19th century. It’s like stepping inside a giant painting, with a soaring high-quality soundtrack adding to the sensory experience.

Note: L’Atelier des Lumières has been such a smashing success that it’s been sold out when we’ve checked availability. It’s best to book tickets online in advance.

L’Atelier des Lumières, 8 Rue Saint-Maur, 75011 Paris. Full price ticket is 14,5 euros. Open every day from 10 am to 6 pm. On Fridays and Saturdays it stays open late until 10 pm. Website: atelier-lumieres.com