The Train Stations of Paris, Reborn 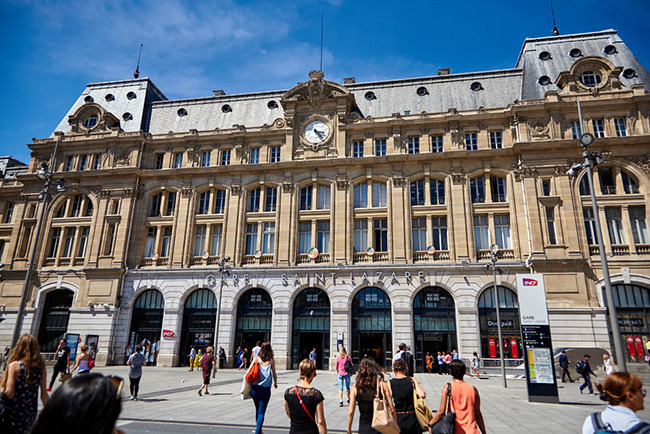 Entering a Paris train station in 1846, you would have been as likely to meet an elegant bourgeois couple in rustling silks as a gun-slinging hunter and his baying hounds setting out for a weekend’s shooting in the countryside, such was the novelty of the new trains. But by 1877 – the year Claude Monet painted his emblematic Gare Saint-Lazare series – the train stations of Paris were already central to urban life, conduits for goods and labour, and the crowded hubs of modernity. Automobiles and airplanes changed all that, however, and by the 1930s the capital’s stations were in decline – dingy, even seedy, places that you wanted to pass through as quickly as you could as you made your way to somewhere else.

Fast-forward to the 21st century, and traffic and pollution are forcing European cities to shift their focus back to public transport – and trains.

“It is a key moment for stations. Because of congestion and the impact of carbon dioxide we have to rethink cities,” says Patrick Ropert, director of the Gares & Connexions division of SNCF, the French national rail service, which is spearheading the renaissance of Paris’s major stations, as well as the those throughout France.

“As the city’s hub, that means rethinking the stations,” says Ropert. His vision is to transform train stations into “city boosters”, a kind of urban village that not only enhances the neighbourhood but offers all the goods and services integral to daily life in one appealing place.

Underway since 2012, the project is far-reaching, and includes the rehabilitation of all of Paris’s train stations from now until 2024 – when Paris hopes to host the Olympic Games. But, this being Paris, some of its most ambitious plans focus on food and art. 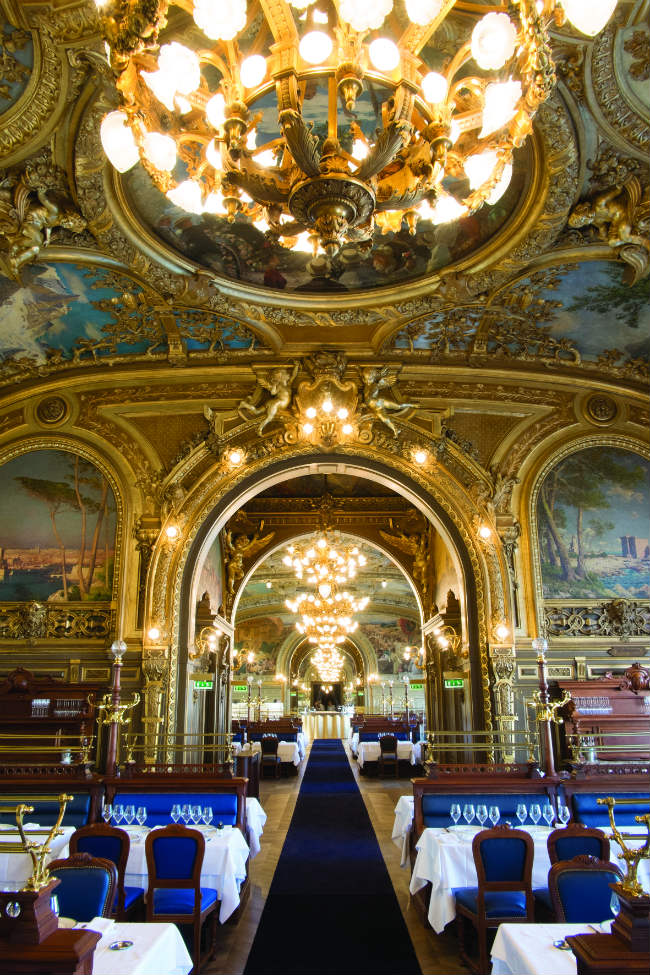 Gourmet on the Go

Ask a Parisian what links Éric Frechon, Thierry Marx and Alain Ducasse and they’ll tell you Michelin stars, earned at the helm of some of Paris’s most prestigious dining rooms. But the real answer is Paris train stations. In 2012, Frechon, chef of the lauded Epicure restaurant, at the Hôtel Le Bristol, and the popular Mini Palais, stunned the Paris culinary world by announcing he would be opening a brasserie at Gare Saint-Lazare.

“When I was first approached with the idea, I said no way,” says Frechon, who couldn’t conceive of a restaurant in a “dingy commuter station”. But when SNCF showed the dubious chef its soaring 250-square-metre space at the front of the historic station, he signed up. 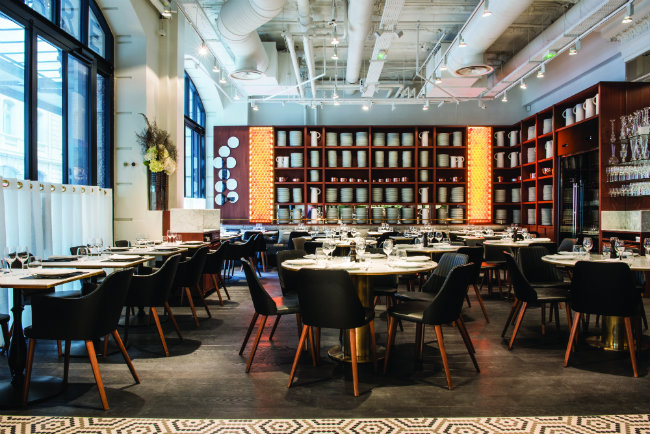 Opened in September 2013, Lazare has been a monumental hit. A stylish update, using all the codes of the traditional brasserie – globe lighting, zinc bar, tiles, mirrors – the brasserie’s all-day hours and menu rich in Norman comfort food echo the classic buffets de la gare that could once be found in every major train station.

Lazare fulfilled Ropert’s three main objectives for new dining at the six main Paris stations: “improving the standard food options, promoting fine dining at the local level, and reinventing our traditional in-station restaurants.” But Ropert also cites a fourth, much more ephemeral, yet still powerfully French, element: the nostalgic connection to a sense of place as expressed through cuisine. “It is important for us to find chefs with a strong affiliation to the station.”

For Frechon, the connection was to “the sky and sea” of his childhood home of Normandy, a region served by Gare Saint-Lazare. For Thierry Marx, chef of the two-star Sur Mesure at the Mandarin Oriental, whose shimmering new brasserie L’Étoile du Nord opened in November, the connection is not quite so poetic: “Thierry admits to spending a few nights at the Gare du Nord as a youth after missing the last train home,” Ropert says, laughing.

But Marx’s threefold endeavour, including a restaurant, wine bar and bakery, embraces the more democratic notions fundamental to the stations. “For me,” said Marx at the opening, “this is a restaurant that functions as a place where all social classes mingle, a café at the counter with a croissant made maison, a baguette or a sandwich to go when you’re headed to London, Amsterdam, or home to the suburbs, where I myself lived a few years ago.” 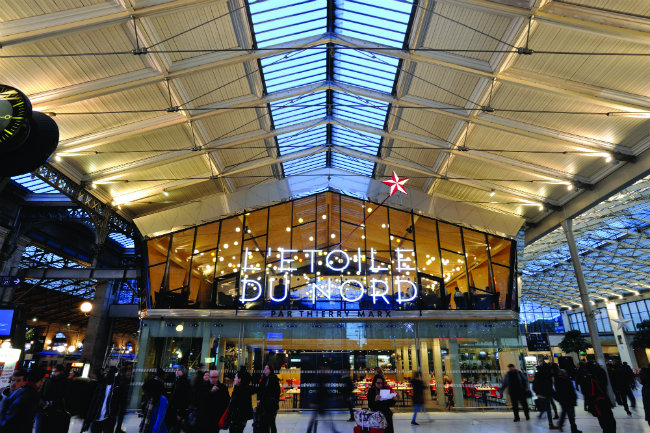 Adjacent to the brasserie, Marx’s Le Fournil bakery is helmed by students from his cooking school in the 20th arrondissement, which provides free, year-long training for young people without a high-school diploma, and the unemployed looking for a new start.

SNCF’s goal to plant a star chef in every major train station, including the Gare de Lyon’s stupendous Belle Époque brasserie Le Train Bleu, will be halfway there in 2018, when Alain Ducasse finally moves into the Gare Montparnasse.

Many more exciting plans are underway. Ropert has tapped star barman Maxime Hoerth, from the illustrious Bar du Bristol, for a new cocktail bar set in the Passerelle de l’Impératrice, a superb 19th-century glass and cast iron passageway connecting Saint-Lazare with the historic Hôtel Terminus (now the Hilton) to open in 2017. Discussions are also underway for a nightclub deep in the WWII-era bomb shelters hidden under the Gare de l’Est, which remain exactly as they were the day Allied soldiers marched down the Champs-Élysées. 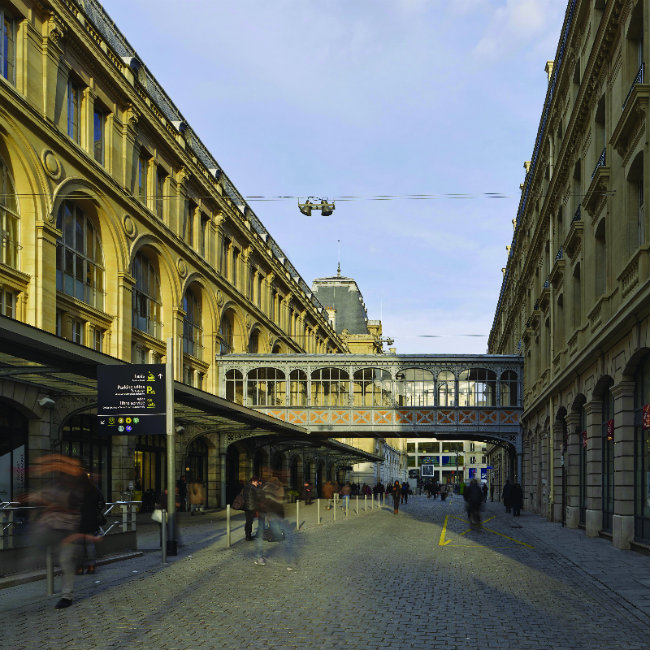 Art on the Go

Massive, teeming with energy and thunderous with the screeching of whistles and the crashing of metal on metal, in the late 19th century the mighty Gare Saint-Lazare was Paris’s most impressive monument to technology. The visionary artists of the day – Monet, Manet, Caillebotte and others – immortalised the station in paint, just as Zola and the great chroniclers of the age did in words.

“Art always represents society,” says Ropert. “If art was being made about the stations in 1877, it was because they were a symbol of the times.” Nowadays, some of Paris’s more vibrant art projects, with by far the largest audiences, are not to be seen in the city’s galleries or museums, but along the quays and courtyards of the Paris stations. 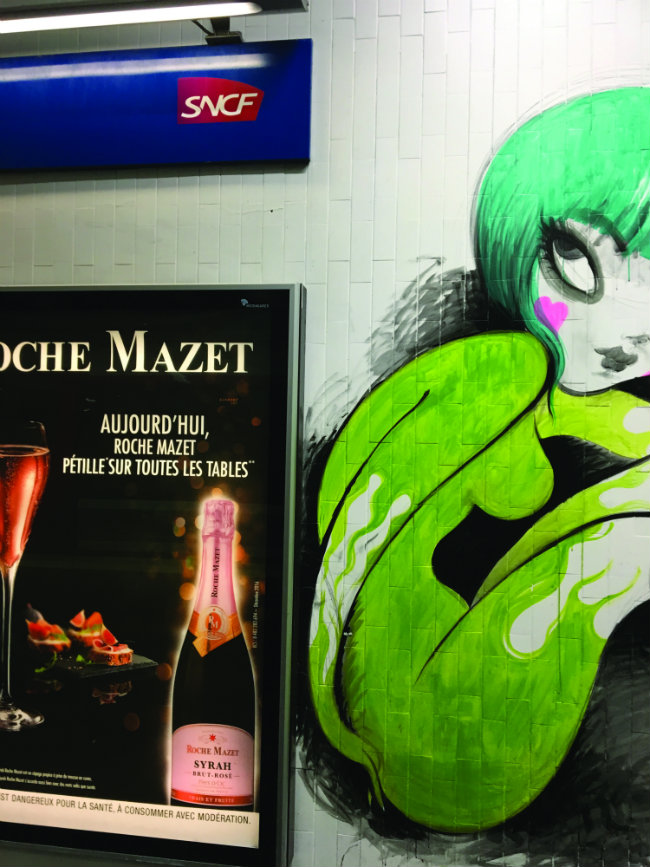 SNCF’s programme to transform miles of bare walls into living canvases, and carve out exhibition and performance areas in its vast open spaces, is well under way in all of Paris’s stations, and in the gares of larger cities countrywide, which serve 10 million people a day. If graffiti was once the bane of transport, the SNCF is extending the olive branch, inviting street artists to create permanent works against a backdrop of motion.

“Street art is the future. We can’t say it’s just people from the suburbs doing stuff under a bridge. It’s a real art form, and we’re playing with that,” emphasises Ropert. “We provide them with walls in our stations – something they are desperately looking for – and also with an audience.”

Last year, the stations welcomed 18 artists from 15 countries to work during the daily commute, which, for the Gare du Nord alone – Europe’s largest station – involves 700,000 people a day. “What the artists loved most was the interaction with travellers,” confirms Ropert. For an idea of what’s cooking, head to Gare du Nord’s Quai 36, where a group of artists – members of an arts organisation of the same name – have created riveting murals along the length of the platform. 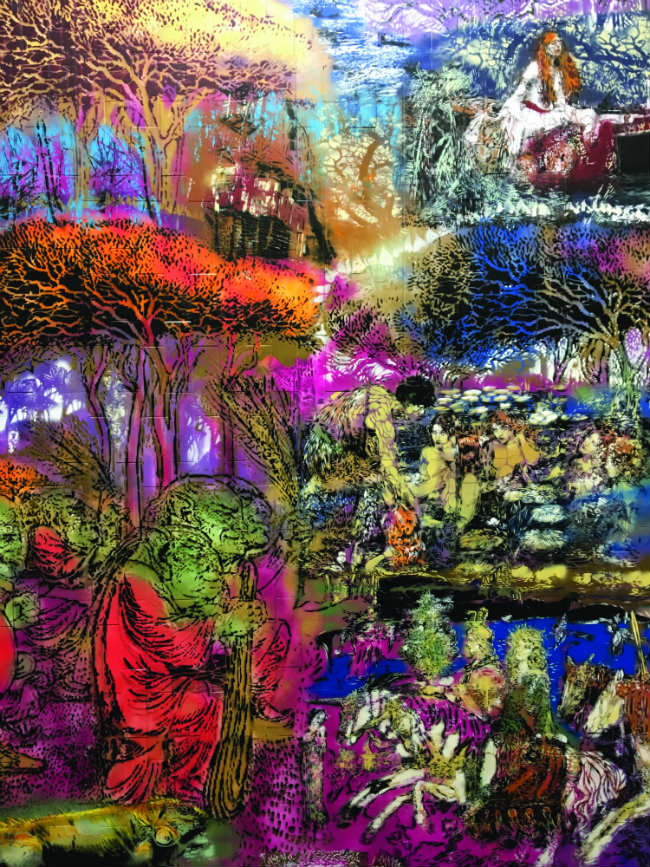 One of the most popular innovations to appear in the stations this year was Short Edition’s literature-dispensing vending machines. Press buttons 1, 3 or 5 – the length of your story in minutes – and the distributor spits out a long, receipt-like paper printed with a mini story to enhance your train ride, free of charge. The first machines were such a hit that plans are in the works to incorporate them into all the major stations, including machines with stories in English. SNCF accepts submissions from anyone so inclined, and the winning stories become part of the repertoire. 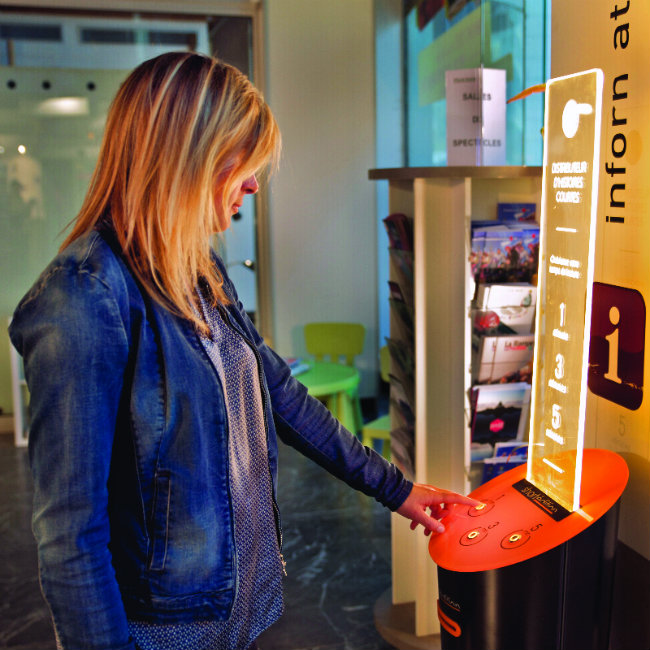 Painting, sculpture, photography, film, literature, music, dance, performance – all have a place in Paris’s evolving stations. Last year’s programme included such far-flung projects as a collaboration with the Cinémathèque Française on French new-wave cinema; an exhibition of illustrations from the new Harry Potter book, in collaboration with Gallimard Jeunesse publishers, at Montparnasse; Jean-François Rauzier’s monumental hyperphotos at the Gare d’Austerlitz; Robert Stadler’s olfactory artwork, in partnership with the new Grand Musée de Parfum, at Saint-Lazare; and artists in residence at Saint-Lazare and Gare de Lyon.

If that weren’t enough to prove SNCF’s exploratory spirit, for a week in December, Gares & Connexions tested a robotic waste bin at the Gare du Lyon. Baryl, by the French start-up Immersive Robotics, vaguely resembles a high-tech seal begging for a fish. Instead of clapping, however, the satiated poubelle emits an electronic “Merci!”

What’s to come in the Paris stations? Nearly anything you can imagine to ease our hectic modern lives: post offices for easy package pick-up and drop-off, day care centres, state-of-the-art connectivity, Locavore restaurants, food markets, fitness centres and, of course, shopping malls. And for recreation, pop-up bars, like last summer’s hugely successful Le Perchoir, a rooftop lounge behind Saint-Lazare’s enormous clock face, as well as cosy wine and cocktail bars, are all part of this ambitious and transformational plan.

Previous Article The Carrefours of France in San Francisco: The Legion of Honor, and Young Monet Too
Next Article Restaurant Reviews: Les Loges in Lyon