Château de Valençay: The Most Picturesque Park and Princely Palace 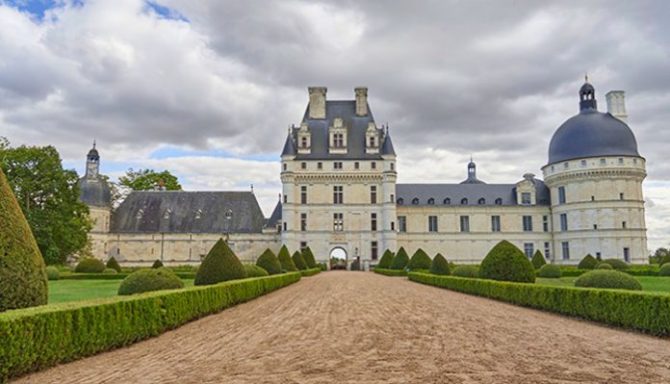 The French novelist George Sand noted that “no king has owned a more picturesque park.” While no king owned Château de Valençay, one of its famous owners was indeed a prince.

Enter the Duchess’s Garden via the ornate double staircase. The cast iron sculpture is Ceres and Cupid. Photo: Dawn Dailey

Built on the site of a razed 12th-century manor house, Château de Valençay is reminiscent of other Renaissance-styled châteaux with its ornate stone keep adorned with symmetrical windows and flanked by oversized round towers. Louis d’Estampes, the original and wealthy owner, began construction in 1520 until his death 10 years later. His descendants continued building for the next 120 years before it was completed. But Château de Valençay is better known because of a later and more illustrious owner. In 1803, Charles Maurice de Talleyrand-Périgord, also known as the Prince of Benevento, purchased the château. Talleyrand was a shrewd and calculating diplomat who managed to hold onto his power both before and after Napoleon Bonaparte’s reign. At one point, he was Napoleon’s foreign minister, and later, the vice grand elector of the Empire.

The west wing as viewed from the vast park. Photo: Dawn Dailey

Through a window in the south tower. Photo: Dawn Dailey

Lucid and quick-witted until his death in 1838, Talleyrand was not afraid to share his opinions. Sometimes this got him into trouble, such as in 1808 when he loudly opposed Napoleon’s military operations against Spain. Napoleon countered with a strong recommendation that Talleyrand “host” several members of the royal family of Spain. What was originally intended to be a few months of internment at the Château de Valençay for the princely prisoners turned into six years of captivity. One might call it “castle arrest.” Talleyrand was the ultimate host for the first three months until he grew bored and left for Paris, leaving the hospitality details up to his wife.

View through the arch of the keep with M. Talleyrand’s coat of arms above. Photo: Dawn Dailey

Covered passageway with ribbed vaulting. Sculptures and other artworks, including a major portrait gallery on the ground floor, abound in this château. Photo: Dawn Dailey

Later, in 1815, Talleyrand’s participation in the Congress of Vienna was instrumental in softening the blow to France from the defeat at Waterloo. Today, the table around which these powerful diplomats engaged in their negotiations in Vienna resides here in the Grand Salon. Purported to be intentionally round so no leader could claim more power than the others, this mahogany table is a testament to the power that Talleyrand wielded on behalf of France.

Le Grand Salon, complete with the round table from the Congress of Vienna. Photo: Dawn Dailey

La Salle de Musique with a rare pianoforte crafted by the Érard brothers in 1809. The gilded harp was made in Paris in 1818. Photo: Dawn Dailey

While his political motives were at times controversial, Talleyrand’s closer-to-home endeavors were more altruistic. He introduced Merino sheep to the area and, using their fine wool, created a renowned hosiery-making industry which employed hundreds of local workers. He built a school for girls (an unheard-of venture in the 19th century) and an almshouse for the poor. There were no homeless residents or jobless workers in the town of Valençay as its generous benefactor sought to provide for all in need.

Whenever he returned to Valençay, Talleyrand felt a million kilometres away from the political drama in Paris. His château was his antidote to stressful living. In Valençay where the primary business was that of farming and sheep shearing, Talleyrand felt free from the tensions of politics and diplomacy. He said it was a place “to do what one wants, to think of what one pleases, to follow one’s own inclinations rather than seeking a direction.” I wonder if his political prisoners felt as free.

The towering south side of the keep encircles the immense courtyard. Photo: Dawn Dailey

The south courtyard, with its floral-surrounded fountain, is flanked by the the magnificent west wing. Photo: Dawn Dailey

As I walk (pre-pandemic), surrounded by the allure of both the castle and the gardens, I contemplate the words of Monsieur de Talleyrand, of that sense of freedom here, to wander as one likes and to explore as one wills. Perhaps captivity here would indeed be sweet.

Visiting the Château de Valençay with its gardens and expansive park is a journey into the past with the simplicity Talleyrand felt was compelling here. Even in autumn, with few crowds, and albeit fewer flowers, I can sense his spirit wandering freely among the beauty of this truly picturesque place in the heart of France, far from the madding crowds.

Note: Although Château de Valençay is closed during la crise sanitaire, it’s never too early to start dreaming and planning your next trip! Plan to meander the many rooms filled with period furnishings and adorned with numerous paintings and sculptures. Enjoy strolling the magnificent grounds. Tours are available or you are free to wander on your own. Hang onto your entrance ticket in order to receive a discount when purchasing tickets at other nearby châteaux. See Château de Valençay website for more information.