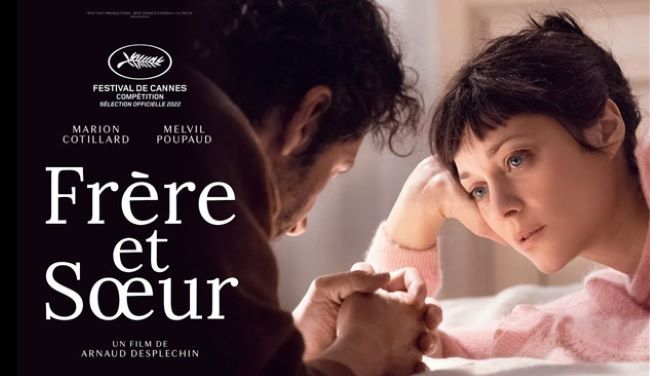 Fraught. Turbulent. Tense. Loving. Hating. All these words and more apply at one time or another to the psychodynamics of the family unit. There are many configurations to explore, and have been in books and movies: Fathers and Sons (title of a DH Lawrence novel). Twins (title of an Ivan Reitman comedy). Sisters (title of a Brian de Palma film). The brother and sister binary may hold the greatest drama. Birth order and age difference can complicate things, but often there’s no greater intimacy or rivalry, complicity or estrangement.

Another type of family drama surrounds the event we all face eventually: the death of a parent. The event is traumatic in and of itself, and the posthumous situation can also be intense, turning our life’s conception of parental relations upside down. Secrets come out, wills may hold nasty surprises.

Arnaud Desplechin’s new film, Frère et Soeur (Brother and Sister) combines these two archetypal set-ups. A pair of elderly parents go through a horrific road accident, the father hangs on, while the mother will succumb to it. The hospital passion will bring together siblings who haven’t seen each other in years. Though the backstory isn’t clear, we understand it’s not for nothing that they haven’t kept in contact all this time: there’s bad blood that’s so bad it’s flammable, and the family crisis lights a conflagration to rival the car crash.

The main characters are played by two charismatic actors: Marion Cotillard, who as they say needs no introduction, and Melvil Poupaud (An Officer and a Spy). While I love Cotillard’s acting, I often feel she’s “belting it out”, but here she seems to dig very deep within herself, portraying a theatre actress named Alice. She’s a consummate professional and ambitious personality, and we don’t see much of a personal life. Her brother Louis is an artist too, a writer, and a teacher. We learn they were rivals of a sort in the past. Alice is too self-absorbed to pay much mind to this, unless she’s forced to.

Louis is more tempestuous. Even when his character is in a good mood Melvil Poupaud has a feral quality reminiscent of the actor Taha Rahim — when he smiles his teeth look like they might bite. When his mood swings to the explosive side, he’s more similar to the French theatrical actor Jacques Weber: there’s something bombastic about his tirades, and we wonder: is the character a blowhard or the actor?

The director, Arnaud Desplechin, brings out the powerful best in his actors. Desplechin is an acclaimed filmmaker (Esther Kahn; Roi et Reine) on the order of Paul Thomas Anderson: determined to do something different and important with every film, but maybe over-determined. This gives his films (like Anderson’s) a somewhat heavy quality. But his films are always fascinating to watch. In style and technique his methodology seems to be that of Orson Welles: to assume he knows nothing about film — as if it’s a brand-new medium he’s approaching for the first time — and so he makes it up as he goes along.

Desplechin seems capable of doing just about anything: The spectacular car accident is as scarifying a sequence as I’ve seen in recent years. Though the film is essentially realistic, there’s a “flying” scene which seems undecided whether it’s hallucination or magic realism, but either way, the director brings it off. A humdrum scene between the writer and his nephew escalates (or degenerates) into a fever pitch of Dostoevskian proportions. Despite all the technical virtuosity, the film’s basic form seems to be cinema-as-theatre, and is built around big confrontation scenes between the brother and sister, and other family members.


At one point we glimpse a poster advertising future productions Alice will play in. One is an adaptation of Dostoevsky’s Brothers Karamazov and another, an adaptation of Joyce’s The Dead. This seems to be a proclamation of the film’s ambitions. It also points out its problems. The Brothers Karamazov is about three brothers. Contrary to what everything written above may indicate, Brother and Sister also has a third sibling, a brother named Fidèle. But he doesn’t have his own dramatic function. Though his name indicates he’s supposed to symbolise faithfulness, he’s really a buffer character or straight man, like Gummo Marx. This throws the drama out of whack. Also problematic, though less so, is the aforementioned nephew (played by Max Blaissette de Malglaive). He’s very striking in appearance — looking at once old and young, male and female. He arouses sympathy, yet we’re not sure what he’s doing in the movie.

Aside from character configurations is the dramatic arc of the film. The accident and its aftermath is the film’s catalyser. But the real crux of Brother and Sister is the origin story behind the family’s bad blood. What we get feels banal and unsatisfactory: The father’s career was limited and so he pushed his children. Alice was overweeningly ambitious. Louis was resentful. Too banal for so much drama! We do also get the idea that at some point Louis abandoned his family’s complexes, married an exotic beauty (affectingly played by Golshifteh Farahani), had a child, wrote his books — perhaps one of them crossed the line, was too revealing about family members. As a result they cut him off, and never visited, not even to see his son, except after he’d died. But his over-reactions even to this seem rather much. We observe tantalising hints of something more, of the me-thinks-he-protesteth too much variety. Only hints. I was left enthralled and frustrated by Arnaud Desplechin’s puzzle pieces, but other viewers may be more adept than me at putting them together.

Production: Why Not Production/Arte co-producer

Previous Article In the Footsteps of Ambroise Vollard
Next Article Eco-Tourism: Take it Slow in France