City Focus: Arles in the South of France 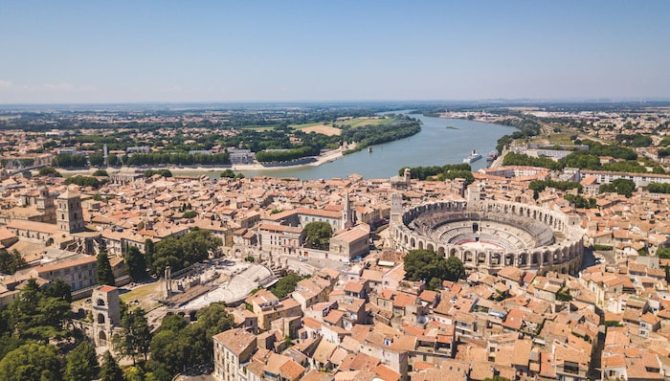 The northern gateway to the Camargue, Arles successfully blends the very old and the thoroughly modern. Gillian Thornton walks in Roman footsteps to find Van Gogh

Pitch up in Arles and it won’t be long before you run into the Romans: their built legacy still packs a pretty hefty punch 2,000 years on. Van Gogh pops up regularly too, having spent his most productive spell around the narrow streets and shady squares. But I have to admit I nearly missed Picasso, such is the wealth of attractions in this UNESCO-listed city. And this year, Arles celebrates the opening of an eye-catching new addition to the skyline.

Situated at the northern apex of the Rhône delta, gateway to the Camargue wetlands, Arles was first a Celtic city, colonised by the Greeks and then from the 1st century AD, quickly developed by the Romans. The 12th century saw the rise of outstanding Romanesque architecture, only partly replaced in the 17th by bourgeois Provençal townhouses. So today, Arles offers layers of period architecture in one compact city centre.

At the heart of the old town stands the Roman amphitheatre, also referred to as the arena because of the bull games that still take place there. Impressive from any angle, this towering monument dramatically recalls the days when more than 50,000 people lived in the riverside city of Arelate. More than 20,000 spectators could watch games here at any one time but in the Middle Ages, this vast space – 130m long – was turned into a fortified community. 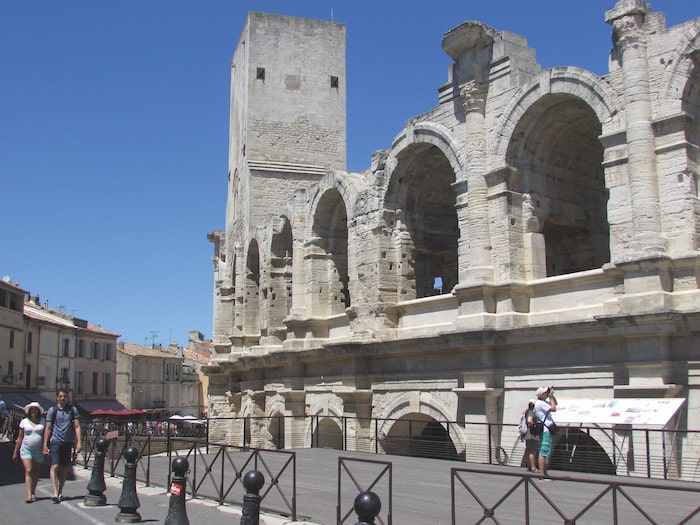 The Roman amphitheatre was one of the largest in the Roman world. Photo credit © Gillian Thornton

Restored to its original purpose in the 19th century, the arena still hosts a variety of events including the Courses Camarguaises or Bull Races. Held during July and August, these traditional contests require brave young men – the raseteurs – to pluck rosettes off the up-turned horns of native black cattle. No animals are harmed, though the runners risk a few nasty cuts and bruises, and across the Camargue, statues are erected to the most legendary competition bulls.

A short walk from the arena, Arles’s Roman theatre stages summer events of a less frantic nature. Look out for concerts and theatre productions. If you really love your Romans, you can delve even deeper – in every sense of the word – into their life and times with a tour of the Cryptoportico, a network of underground galleries beneath the ancient forum. Close to the river, explore the Baths of Constantine, or head to the Arles Archeological Museum where the 1,800 objects on display include a Gallo-Roman barge found intact in the waters of the Rhone.

The combination of Roman and Romanesque art and architecture has earned the city UNESCO World Heritage status, along with the prestigious French label Ville d’Art et d’Histoire. The doorway of Saint-Trophime Church on Place de la République, is a 12th-century gem, but don’t just pass by: head inside the cloister to see its carved capitols, intricate friezes and open upper gallery. The obelisk on the square outside is an antiquity carved in a Roman granite quarry in Asia Minor and it originally stood in the Roman circus. 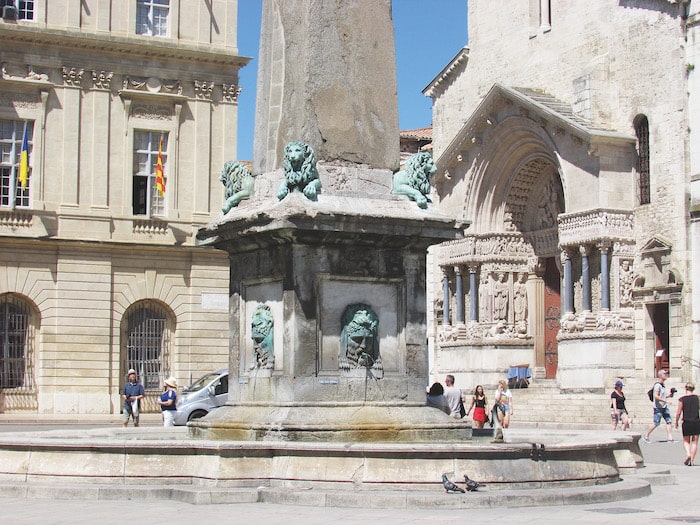 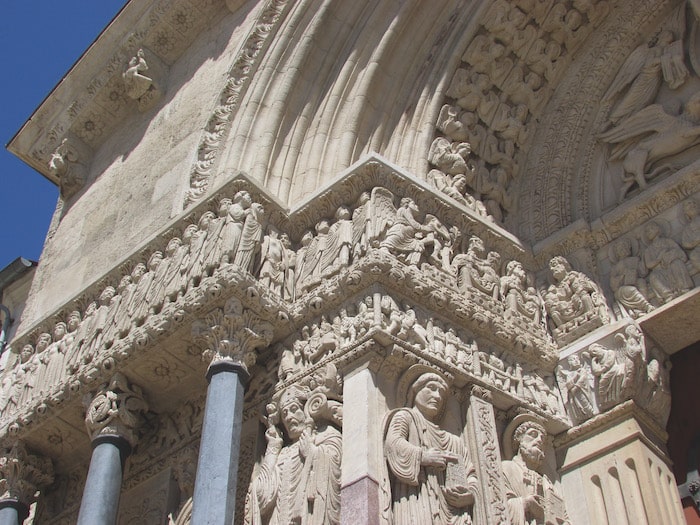 Fast forward to the 19th century and a cold February day in 1888, when Vincent Van Gogh, weary of the hubbub of Parisian life, arrived in Arles looking for light. It was to be the start of his most productive period, resulting in 300 works in just 15 months, including the celebrated Night Café and the Hospital Garden.

Sadly you won’t find any of his original works on permanent display in the city, but the locations he painted are everywhere, a dozen of them marked with reproductions of his dramatic pictures such as Starry Night Over The Rhône. Take in the latest exhibition at the Arles Vincent Van Gogh Foundation, which celebrates the artist’s impact on contemporary art, and don’t miss the breathtaking city and river view from the terrace.

Picasso’s association with the city is less well-known, a pleasant surprise for visitors to the Réattu Museum of fine arts, modern and contemporary art. Housed in the former Grand Priory of the Knights of Malta, the collection was kick-started in the 19th century by a donation of works by neo-classical painter Jacques Réattu. And in 1965, the first photography department in any French beaux arts museum was inaugurated here. Pablo Picasso fell in love with the museum and donated 57 drawings in 1971, one of the first public collections devoted to the artist. Look out too for the letter from Van Gogh to Gauguin, the only original Van Gogh in the city! 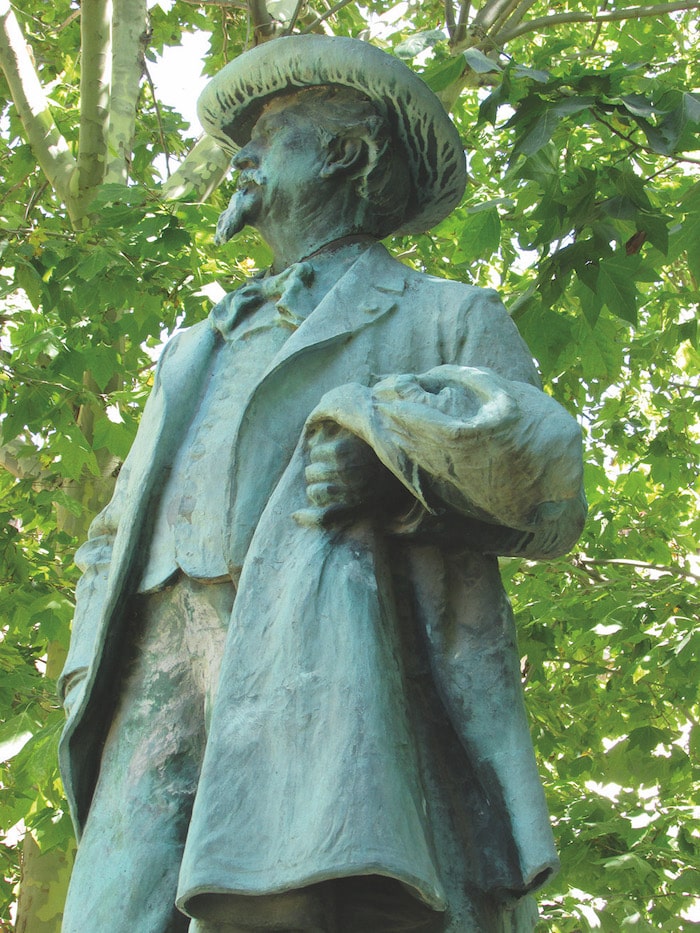 Photography was in its infancy when Vincent set up his easel around Arles, but Lucien Clergue, friend of Picasso and Cocteau, was a founder of the city’s International Photography Festival. Staged from early July until late September each year, this unique event takes place in venues ranging from galleries and churches to museums and outdoor spaces. Clergue also worked on establishing the Réattu Museum collection of photographic prints. And since 1982, Arles has been home to the National Photography School, the only one in France dedicated to the art.

Amongst the city’s many notable museums are the Museon Arlaten (Provençal for Musée Arlésien), created by poet Frédéric Mistral, who was awarded the Nobel Prize for Literature for Mireille, a poem in Provençal. Look for his statue in Place du Forum. Opened in 1896, the museum charts the development of local life from the 18th century to the present day and reopens this year after a major refurbishment. 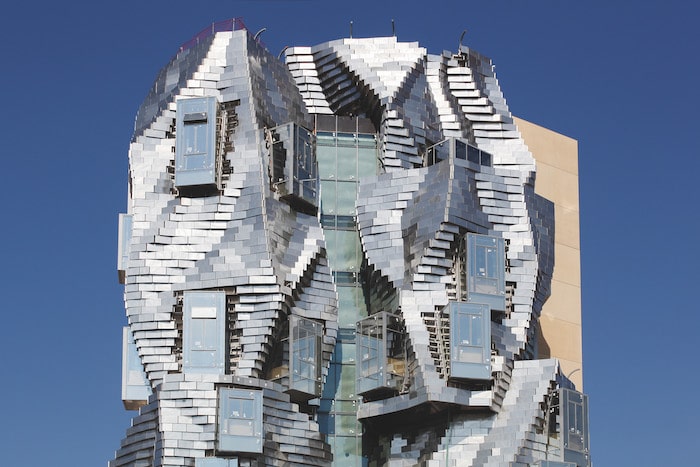 The legendary architect Frank Gehry is contributing to the skyline of Arles. Photo credit © Shutterstock

The most eye-catching addition to the city this year will be the completion of an art and culture centre in an emblematic building designed by Frank Gehry. Its 56m twisted tower is built using recycled materials and rises out of the Parc des Ateliers, a former railway siding transformed into leisure park.

This year will also witness a uniquely Arlesien event – the election of the Queen of Arles. Many famous travellers, including Dumas, Flaubert and Mérimée, have hailed the Arlésiennes as the most beautiful women in the world, but the first modern Queen of Arles was elected in 1930 and there have been just 23 since. Far from being a non-PC beauty contest, the aim is to elect a young woman who will be an ambassador for local culture. A jury will select the winner for her knowledge of local history, literature, tradition and lengo nostro, the language of Provence. She must then uphold and promote them all throughout her three-year reign.

May 1st is also the date of the annual Fête des Gardians, so expect some lively celebrations. The gardians – or Camargue cowherds – gather on Boulevard des Lices before parading through town to salute the statue of Frédéric Mistral. But any time is party time in Arles, with festivals and exhibitions throughout the year in a city that captivated Vincent and will surely captivate you too. 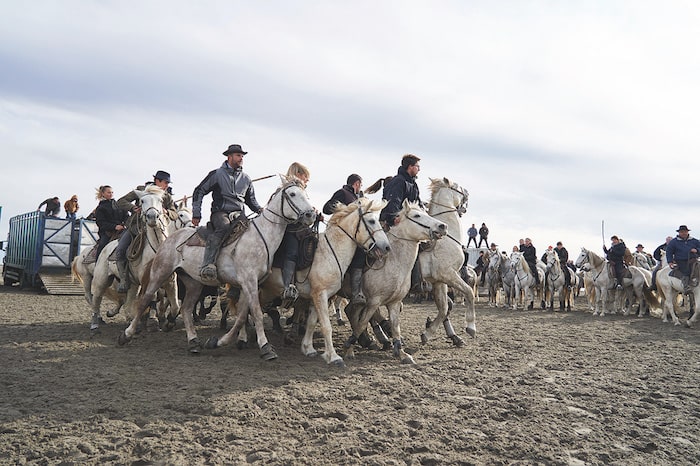 History buffs, active types and galloping gourmets rejoice – Arles has plenty to keep all of you entertained.Your only problem will be deciding what to do first. To help you out, we’ve put together our top five very favourite things to do, just to help you on your way… 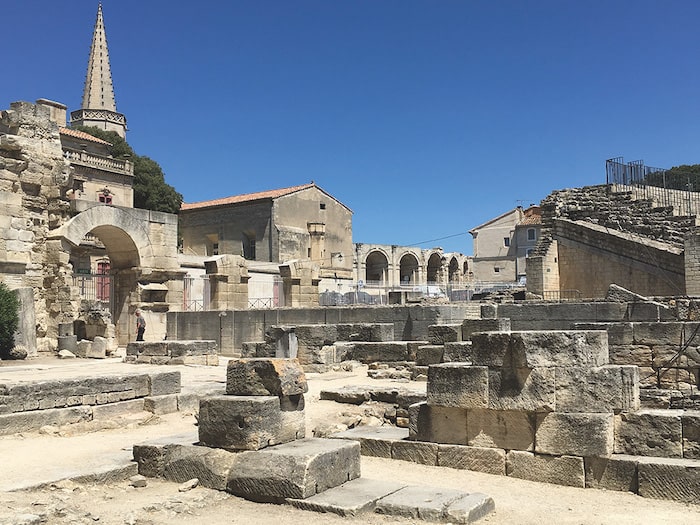 The city’s most in-your-face monument, despite strong competition. Ranked 20th in size in the Roman world, it can still seat 12,500 spectators, against the 21,000 of its heyday. arenes-arles.com 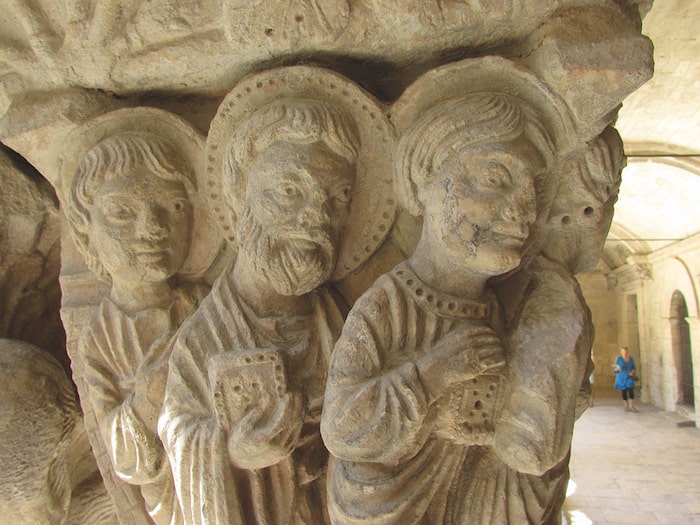 The cloister is a haven of calm behind the bustle of the square in front. Well worth the few euros’ entrance fee for the unusual views from the upper cloister and the array of intricately sculpted figures. paroisses-aixarles.fr 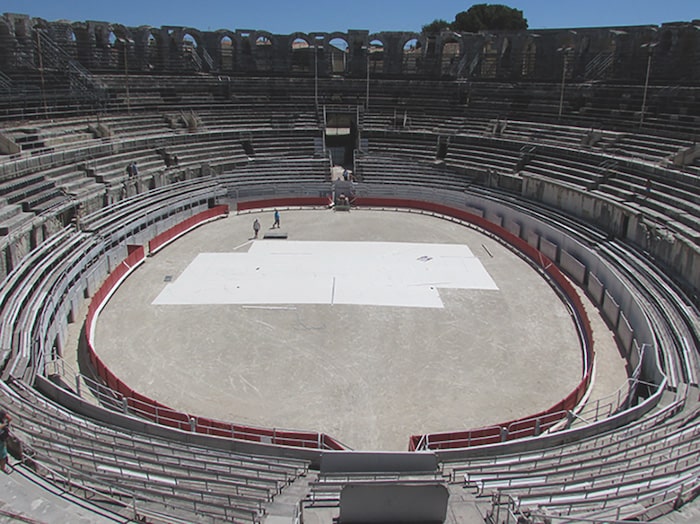 Built a century before the amphitheatre, it is in less good repair after looting across the centuries for building materials. Rediscovered in the 17th century, it still oozes full-on Roman atmosphere. arlestourisme.com 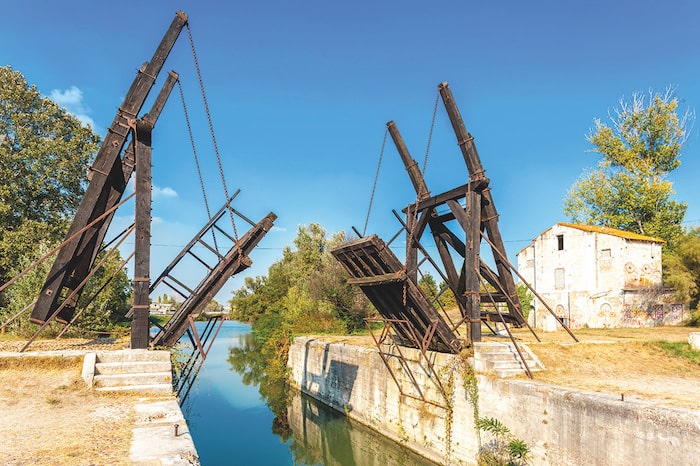 Built in the 19th century and originally named the Langlois Bridge after the man who operated it, it spans the Arles to Bouc canal just outside the city, and was immortalised by Van Gogh. arlestourisme.com 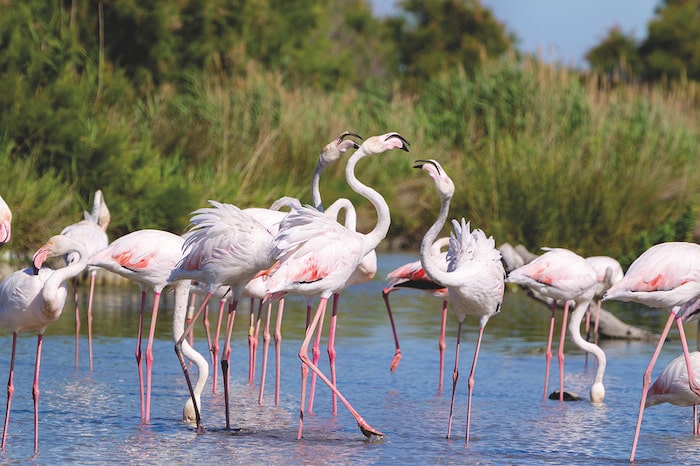 Take a tour by car, boat, bike or horseback to discover the unique mix of eco-systems in France’s largest wetland area. Black bulls, white horses and pink flamingos, to name but a few. camargue.com

Where to stay and eat