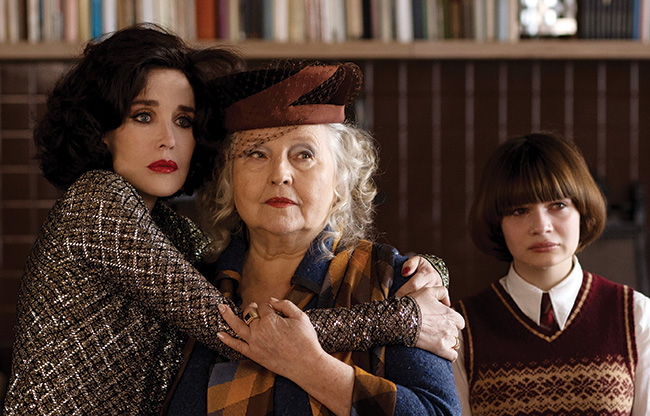 Twenty-two years ago, François Ozon adapted Rainer Werner Fassbinder’s Water Drops on Burning Rocks, a move which ignited his career as one of France’s most interesting directors.

Now he has borrowed from the master of New German Cinema once more, this time with a gender-switch version of Fassbinder’s all-female movie The Bitter Tears of Petra von Kant (1972).

In Ozon’s version, Peter Von Kant (Denis Ménochet) is a successful, famous director, who lives with his assistant Karl (Stefan Crepon), whom he likes to mistreat and humiliate. Through his muse, the great actress Sidonie (Isabelle Adjani), he meets and falls in love with Amir (Khalil Gharbia), a handsome young man of modest means. He offers to share his apartment and help Amir break into the world of cinema, an offer which Amir accepts. But several months later, as soon as Amir becomes a star, he breaks up with Peter, leaving him alone to face his demons.

Less glowering and relentlessly claustrophobic than the original (Ozon says: “Fassbinder is not a kind filmmaker, his films are not friendly”), this predominantly male reboot finds more shades of comedy, almost, occasionally, to the point of farce. Ozon says: “Fassbinder is a filmmaker whose work, thought and vision of the world have always haunted me. As for his incredible creative energy, it fascinates me and he remains an example to follow in my way of working.”

On the decision to move the action from the fashion world to the world of cinema, Ozon explains: “I basically wanted to film a version in which I myself can identify more directly. Hence the choice to forget the world of fashion for the world of cinema and to bring back to the male gender the three main characters, especially since I had the intuition that this text was actually a self-portrait, centred on one of Fassbinder’s passionate love stories.” The movie marks the 50th anniversary of Fassbinder’s original, and pleasingly, Hanna Schygulla makes a return appearance.