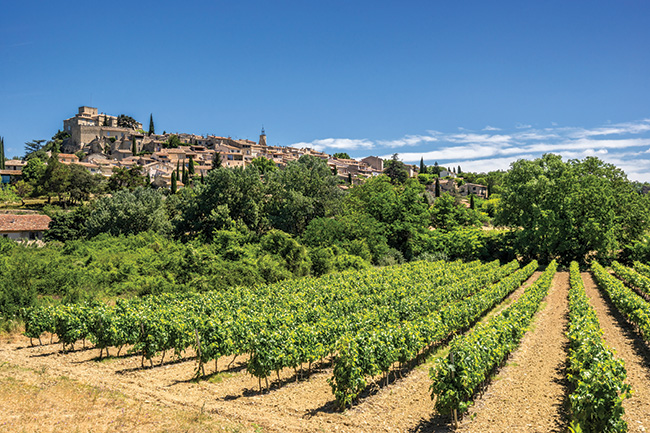 Stephen Turnbull travels to the heart of Provence to explore the background of his favourite French film and learn what inspired Marcel Pagnol to write it.

I’ve had a lifelong love affair with French cinema. This includes such classics as the enchanting short film, Le Ballon Rouge (The Red Balloon), and Jean-Pierre Jeunet’s equally magical Amélie, both set in Paris. But there is one film that stands firmly at the top of my all-time favourites list: Jean de Florette. I first saw it in the late 1980s, not long after its theatrical release in the UK, and I was hooked from the beginning; by the end, I was choking back the tears.

Over 30 years later, the film, which I always take to include the ‘second act’ sequel, Manon des Sources, retains an unshakeable grip on my imagination. In fact, I have now seen it several times and never tire of it. But the more I’ve watched it, the more I’ve yearned to explore its real-world background – the story behind the story of its global success (it broke box office records in France and was a big hit in the UK as well). In particular, I’ve been keen to discover the inspiration behind Marcel Pagnol’s 1962 book, L’Eau des Collines (The Water of the Hills) from which the film was adapted, and the main locations at the heart of Provence used by director Claude Berri to bring the book vividly to life. What better way, then, than to take a ‘film tourism’ tour? But before I tell you about that, allow me first to set the scene.

The title sequence of Jean de Florette is a masterful piece of film-making that draws the audience in and sets the tone perfectly for the heartbreaking story that follows. Portentous orchestral music resonates over the dark interior of a vehicle with a silhouetted driver, going we know not where. In a wider shot, and the breaking light of dawn, the vehicle is then revealed as a small, rickety bus, perhaps from the pre-war years.

The music, written by composer Jean-Claude Petit and inspired by Verdi’s La Forza del Destino, then becomes poignant (we hear a haunting melody on a mouth organ) before swelling into a swirlingly romantic soundscape. The bus then continues on through an empty, Provençal-style village before coming to a halt in open countryside to allow its single passenger to disembark. As he does so, we see that he is a somewhat mysterious young man sporting a large, black beret, and a cape of the same colour slung over his slim frame. He is also carrying a small suitcase. We follow him as the light breaks further and he climbs a slope amidst the arid, autumnal landscape.

But who is this man? Why has he come here, and what is he carrying in that case? Don’t worry if you have yet to see the film – I’ll do my best not to give away too much of the story.

Our tour begins at La Font-de-Mai, a domaine/eco-museum in a picturesque rural setting near the town of Aubagne, in the Bouches-du-Rhône département, where the celebrated writer and filmmaker Marcel Pagnol was born in 1895. Here, our guide, Georges Mérentier, himself a local man, explains how Pagnol regularly walked the surrounding limestone hills, dominated by the mighty Garlaban massif, as both a child and an adult.

He also tells us that Pagnol was possessed of a very scientific as well as creative mind, enabling him to make useful notes on the flora and fauna he found among the dense garrigue and rocky slopes. It was this attention to detail that would subsequently furnish his imagination when he came to write the screenplay for L’Eau des Collines (1952).

Somewhat unusually in filmmaking (it’s normally the other way round), Pagnol later adapted his book of the same name from this, adding the Jean de Florette storyline. Likewise, he drew deeply on his experience and local knowledge for the series of semi-autobiographical books he wrote that were also turned into films, most notably La Gloire de mon Père.

After a very pleasant al fresco lunch at the on-site buvette at La Font-de-Mai, we conclude our visit with a tour of its small museum. It has only a modest collection of exhibits – mostly agricultural/ wine-making machinery and household objects – but they give an authentic insight into the traditional, peasant culture of Provence that Pagnol loved so much and which Jean de Florette portrays. In fact, the house used for Jean’s rustic smallholding in the film is located not far from the site in the village of Riboux – but we give that a pass as it is privately owned and time constraints mean we have to move on.

A grape press at the Font de Mai © Stephen Turnbull

Before we proceed, let me answer the questions I posed earlier, and sketch in some more detail about the film. As those who have seen it will recall, the ‘mysterious young man’ we are introduced to in the opening sequence is Ugolin (Daniel Auteil). As it transpires, he has returned from military service in the First World War and aims to seek his fortune in flowers, specifically, the highly marketable carnations which are the contents of his case. But flowers don’t grow without water, especially in the parched soil of Provence…

Central to the story is Ugolin’s uncle, the scheming César Soubeyran (aka le Papet), played superbly by Yves Montand. His primary motivation is to ensure his ambitious but dim-witted nephew makes a success of his business and continues the family name.

But the twist in the tale comes when hunchback tax collector, Jean ‘de Florette’ Cadoret, played by Gérard Dépardieu, arrives to claim his inheritance – a local smallholding that, unbeknownst to him, has a spring on its land.

Deservedly, Daniel Auteuil’s performance as Ugolin won him a César for best actor and a Bafta award for best supporting actor. Interestingly, he wasn’t Berri’s first choice for the role – he had originally wanted the popular comedian, Coluche. However, he felt he couldn’t pull off a Provençal accent and the rest, following Montand’s recommendation, is history. Incidentally, Auteuil later married Emmanuelle Béart, who starred in the sequel, Manon des Sources.

On Set in the South

We stay overnight in the historic town of Aix-en-Provence and the next morning set off northwards for the Vaucluse département. A short while later, we arrive at the first of our film location destinations in the southern Luberon: the charming medieval village of Ansouis, which can trace its history back to the 10th century and is listed as one of France’s Plus Beaux Villages. Here, we meet up with our guide, Elodie Burgé. Unfortunately, the imposing château is closed due to Covid restrictions but it’s mainly the 12th-century Saint-Martin church we’ve come to see.

Inside, it isn’t difficult at all to picture the marriage of Manon as it looks practically identical to the film, while outside there are glorious views from the balcony of the Luberon landscape with its rolling hills and vineyards. Later, Elodie takes us to the atelier of Daniel Galli. Daniel makes santons, delightful clay figurines used for festivities that are emblematic of Provence and feature in the Petit Monde de Marcel Pagnol museum in Aubagne. The museum pays homage to Pagnol’s literary and filmic creations, and includes scenes from Jean de Florette. After a quick demonstration of his skills, Daniel shares some of his favourite anecdotes and memories about the making of the film. Not surprisingly, the main theme is that of starstruck villagers and pampered, egotistical actors.

Next, passing countless fields of poppies that are curiously suggestive of red carnations, we drive to the village of Mirabeau just a short distance to the east. This became Les Bastides Blanches in the film and provided the fountain around which the whole story pivots. Entering the small square in the centre, we immediately catch sight of this and a small female figure perched on its wall. This turns out, of course, to be a statue of Manon, which the village commissioned from a local artist and inaugurated in 2018.

Whether it does justice to Emmanuel Béart’s beauty is debatable but, in combination with the inscription commemorating the making of the film on the fountain itself, it has a certain charm that draws me closer. As I dip my hand in the water like Manon, I suddenly see the extraordinary scene in my mind’s eye where the fountain runs dry and the villagers… Wait, no spoilers, I said. What I will say is that one of the things I love most about the story is how Pagnol imbues water with a deeper meaning: it is not only the lifeblood of a poor Provençal community, but a symbol of the human connection with nature, and the dramatic ebb and flow of life as a whole.

The sculpture of Manon © Shutterstock

Our final stop is the pretty village of Vaugines, nestled between Cucuron and Lourmarin. As well as providing the exterior of the church where Manon was married (a nice bit of film trickery), the Chapelle de Saint-Joseph here was used for the climactic scene where César is confronted in the churchyard with the truth of his past. Sitting on a stone bench at exactly the same spot where the broken man talks to the old blind woman, Delphine, I notice from the image on my smartphone that the match is remarkable. It’s as if the film crew and actors have only just left!

Which brings me finally to the wider question of Jean de Florette’s authenticity. It is true that the film has been criticised as ‘heritage cinema’, heavily funded by the state in order to promote French culture (against anglophone erosion) and boost local tourism. It could also be argued that Pagnol’s ‘humanistic’ approach conveys universal truths about human nature yet overlooks the fundamental conflict between classes, and negatively portrays the (Zolaesque) peasantry.

However, as Joseph Campbell, American writer and expert in comparative mythology, observed, most popular stories (Star Wars is a classic example) are mythic rather than political, focusing on the battle between good and evil, and the hero’s journey from suffering to redemption. Certainly, although good (sort of) triumphs in the end, there is much suffering in the film – and nobody suffers more than Jean himself.

For me, the most powerful scene of all is when Jean de Florette rails against God for his Job-like misfortune amid the thunder and lightning that refuses to bring rain, crying: “Je suis bossu. Vous ne savez-pas? Vous croyez que c’est facile? Y a personne là-haut!” (“I’m a hunchback. Don’t you know that? Do you think it’s easy for me? There’s nobody up there!”)

Ultimately, I believe that Jean de Florette, and its sequel, Manon des Sources, transcends the parochial and the Provençal. But of course that, following the original story, was always Berri’s intention.

Interesting debates aside, the greatest joy of my trip was in discovering both a tangible sense of connection between the film and its locations, and experiencing the wonderful landscape, steeped in traditional culture, that so inspired Marcel Pagnol.

Lead photo credit : The hilltop village of Ansouis in the Luberon, where filming took place © Shutterstock