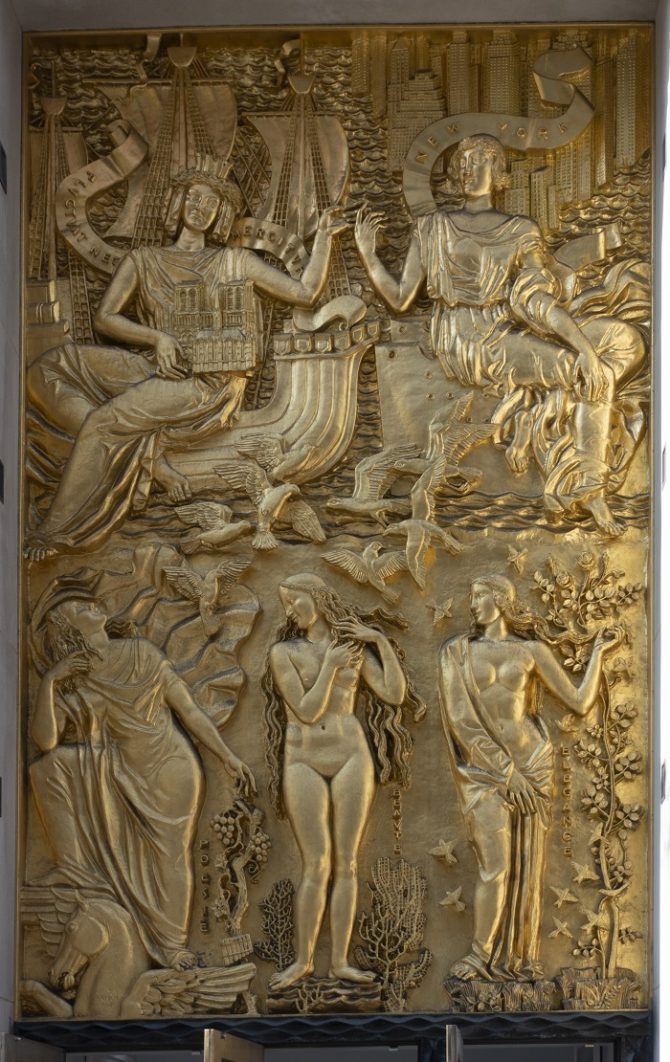 Rivalling Paris, midtown Manhattan abounds in fine examples of Art Deco architecture. From the Waldorf-Astoria Hotel to countless office buildings, subway stations and restaurants, there are wonderful examples on almost every block. One could spend weeks trying to see them all but the biggest and most elaborate, Rockefeller Center, has a French connection. The 12 buildings comprising Rockefeller Center sit on Fifth Avenue in the very heart of Manhattan. Completed in 1939, they were the last great Art Deco building project in New York City, and they brought the era to a spectacular close.

Rockefeller Center’s skyscrapers house Radio City Music Hall, the production studios for Saturday Night Live, The Today Show, the Tonight Show, several foreign consulates, an indoor shopping mall, and offices. On the rooftops are a nightclub, an observation deck and gardens of Spanish, Italian, Japanese, American, French and aquatic designs. Below ground are a subway station and a trucking and shipping terminal. At street-level are luxury shops and restaurants, all surrounded by outdoor cafés, an ice skating rink, a sculpture garden, fountains and pools. 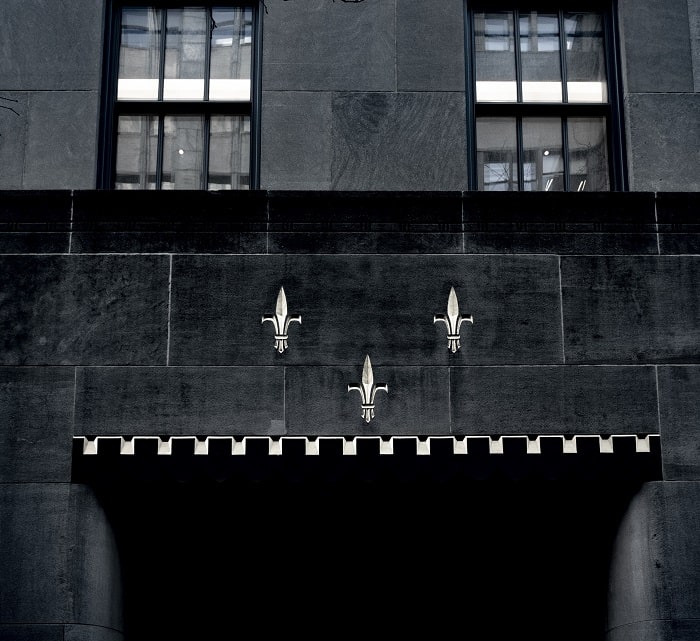 Unlike NYC’s other two Art Deco masterpieces, the Empire State Building and the Chrysler Building, Rockefeller Center’s exterior is modest, exhibiting sleek and stunning design but, with few exceptions, not much in the way of outside ornamentation. Even so, it makes an impression:

In its architecture, Rockefeller Center stands as distinctively for New York as the Louvre stands for Paris. Composed of the essential elements of New York skyscrapers — steel framing and curtain walls — the group relies almost exclusively for exterior decoration on the pattern of its windows, piers, spandrels and wall surfaces. Its beauty derives from a significant play of forms and light and shadow. (WPA Guide to New York City, 1939) 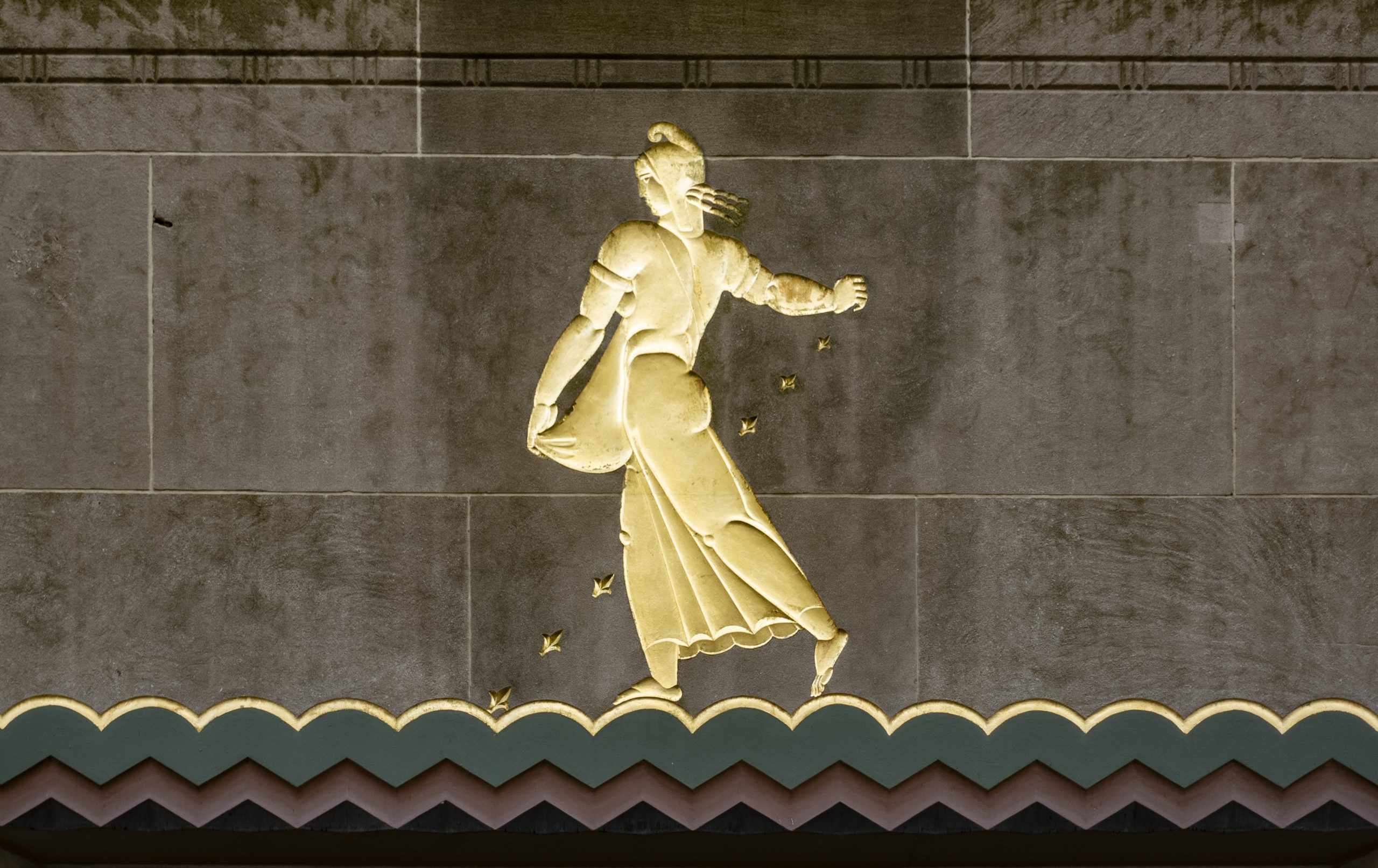 The outside may be severe but Rockefeller Center is unique in the riotous profusion of its decorative artwork both inside and out. John D. Rockefeller Jr., the creator of Rockefeller Center, commissioned its many murals, mosaics, sculptures, and friezes and encouraged the artists to depict aspirational themes:

A mural “Concerned with the Spiritual Challenge of Modern Civilization” graces the elevator bank of one of the 5th Avenue skyscrapers.

Originally included in this exuberant decoration was a fresco by Diego Rivera, “Man at the Crossroads,” commissioned for the lobby of Rockefeller Plaza (“30 Rock”.) Rivera’s subject, endorsed by Rockefeller, was to be the contrast between capitalism and socialism in contemporary social, scientific and material culture. 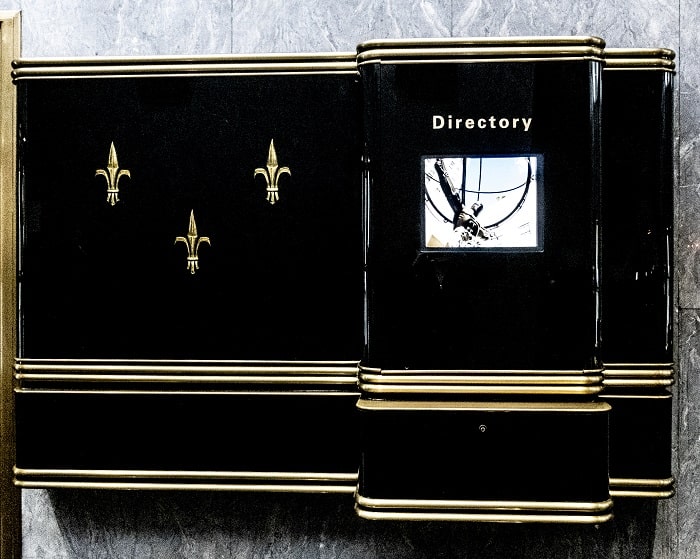 In 1933, while the work was still in process, the New York World Telegram called it anti-capitalist propaganda. In protest, Rivera secretly added an image of Lenin (between the helicopter blades on the right) to the fresco. Rockefeller defended the work but asked Rivera to remove Lenin’s portrait. Rivera refused and Rockefeller then ordered the panel to be plastered over. Thankfully for us, Rivera recreated the fresco in Mexico City at the Palacio des Bellas Artes.

As evidenced by his commissions to international artists, Rockefeller was an ardent internationalist. He also donated the land in Manhattan for construction of the United Nations and endowed The Asia Society, and The Cloisters, a museums devoted to Asian art and European medieval art. Three buildings at Rockefeller Center were devoted to international affairs and businesses: The International Building, The British Empire Building and La Maison Française. 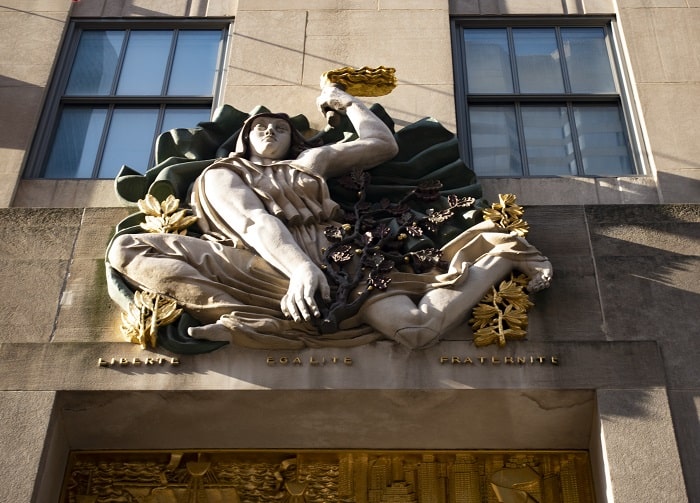 La Maison Française is a six-story building set at the entrance to the entire complex. Above its main entrance is a gilded bronze engraving by Alfred Janniot, the noted French sculptor who designed the bas-reliefs on the Palais de la Porte Dorée in Paris (1931). Janniot’s two women represent France and New York holding hands above the ocean. Below them are three female figures personifying “poésie, beauté, and élégance.” France holds the Cathedral of Notre-Dame on her lap and the scroll unfurling behind her is inscribed with the Latin motto of Paris: “fluctuat nec mergitur” (rocked by the waves, she does not sink.”) Above the bronze is a woman’s figure, also by Jiannot, signifying French freedom and proclaiming “Liberté, Egalité, Fraternité.”

The side entrances to the building are decorated with a frieze featuring a woman wearing a bonnet rouge — the Phrygian-style cap that symbolizes the French revolution — and scattering fleur-de-lys. 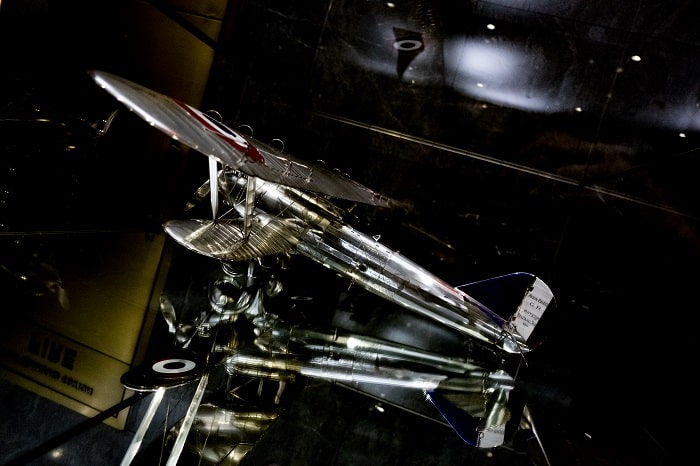 In the lobby of La Maison, all is black marble and brass. Fleur-de-lys abound. It is the perfect setting for Cartier’s remarkable silver model of “Point d’Interrogation,” the Breguet 19 Super Bidon airplane in which Dieudonné Costes and Maurice Bellonte made the first east to west transatlantic flight from Paris to New York in 1930.

On the sixth floor are bronze bas reliefs designed in 1934 by French-American sculptor René Chambelain depicting four eras in French history: Charlemagne’s Empire, the reign of Louis XIV, French colonialisation in the Americas and the French Revolution.

December is a perfect time to visit La Maison Française. The Christmas tree is lit; the skating rink is open; Christmas music fills the air; The Rockettes dance at Radio City Music Hall. Even with all of this competing glitter, La Maison Francaise holds its own — beautiful, elegant, very French.

Previous Article Where to Buy Santons in France
Next Article Timeless Paris: A Charming Tour of the City’s Traditional Shops