Modern Technology and the Art of Conserving Paintings 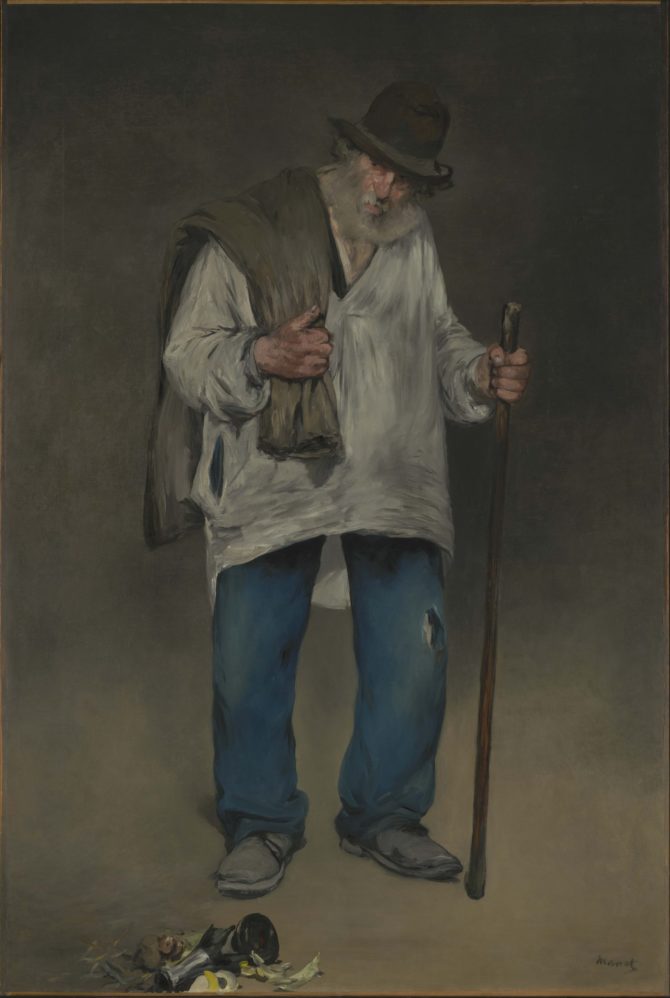 This is the second in a series of articles about the art of conserving paintings. Read the first here.

He’s a ragpicker, a man who made his living rummaging through trash in the streets of Paris in the 1860s looking for rags to sell to paper manufacturers. His 6-foot by 4-foot image was painted by Édouard Manet and today is a beloved part of the Norton Simon Museum collection in Pasadena, California. But Le Chiffonnier, or The Ragpicker, has a modern art conservation story to tell that includes the science and technology of chemistry, engineering, materials, physics and light – plus thousands of cotton swabs – that brought the painting into a new light.

The big issue was an inappropriate varnish job. At the time Manet painted The Ragpicker, it was the custom to apply a natural resin varnish over paintings to add a glossy finish. Even the 500-year-old Mona Lisa had varnishes applied over da Vinci’s paint. But somewhere in the life of The Ragpicker, a thick synthetic varnish, or several of them, had been applied to brighten up the painting and make it more attractive. 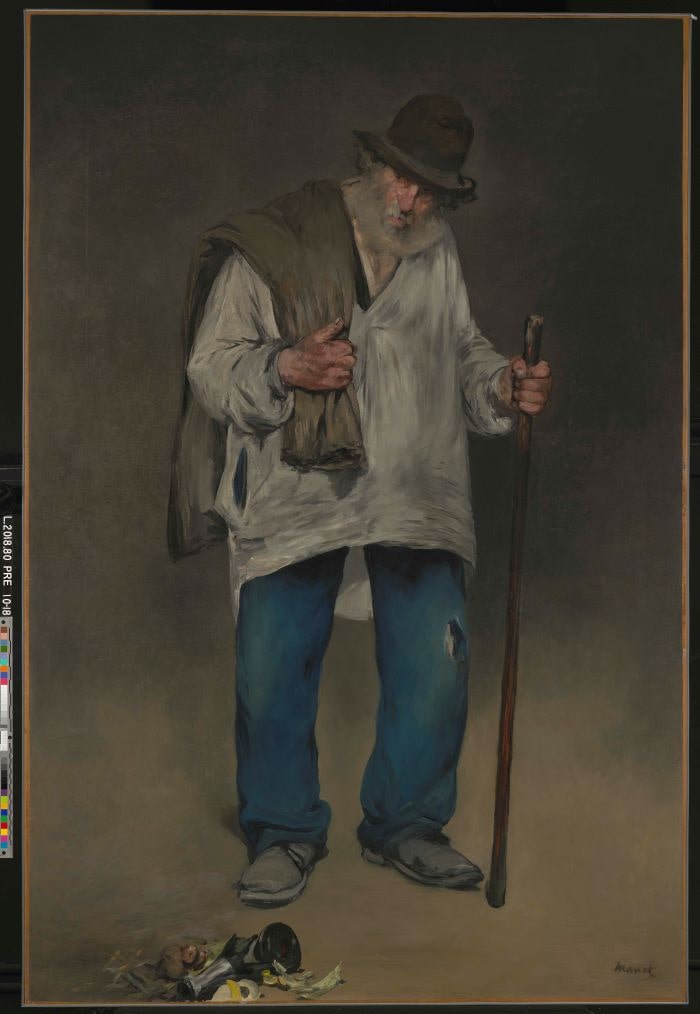 The Ragpicker before treatment. © The J. Paul Getty Museum.

But varnishes turn colour as they age and over the years the painting had taken on a fog that concealed Manet’s painting technique along with the colours and details. In 2017, the Norton Simon worked with the J. Paul Getty Museum in Los Angeles to conserve The Ragpicker as part of a project refreshing three Manet paintings. The Ragpicker was in the worst shape. It would take six months of detailed examination using a variety of technologies to discover what the issues were and decide on an appropriate process to conserve the painting, followed by six more months to do the conservation work. Plus, hidden secrets were found in the painting.

Devi Ormond, Associate Conservator of Painting for the Getty Museum, was part of the team from the Norton Simon and Getty Museums who took on the task of conserving the troubled painting. She became interested in surfaces of paintings as a seven-year-old when a security guard at the Louvre told her not to touch a Van Gogh painting. As a teenager, she became fascinated with a documentary on the restoration of the Sistine Chapel thinking “what an incredible job it would be to work with surfaces so closely – and get paid for it.”

The first tech tool used at the Norton Simon was an ultraviolet (UV) black light flash lamp that is similar to those used in crime scenes to look for clues such as splashes of blood. No blood was found, but what the team saw suggested the top varnish was very thick and creating potential issues regarding the original paint. That was enough evidence to send The Ragpicker to the Getty’s Paintings Conservation Department for a professional technical examination using various types of lighting and tests. 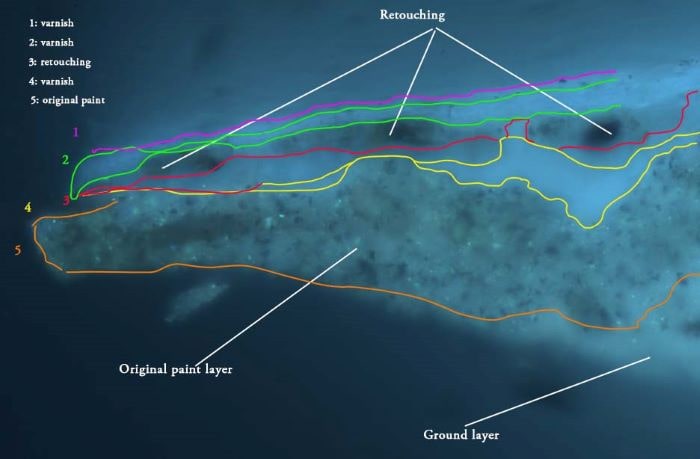 The paint sample test shows the varnish mixing into the original paint – the black dots – and the layer structure. It is taken in UV light and is x100 magnification. © The J. Paul Getty Museum.

“As they say, an image speaks a thousand words,” said Ormond. “Somebody in France looking at this painting and then looking at the UV image will be able to interpret the issues without any language barrier. For example, under UV light, different varnishes fluoresce differently. Natural varnishes glow green and synthetic varnishes glow blue. We could see the blue fluorescence of the synthetic varnish was a problem.” The painting was then examined in infrared light which showed some of the old damages and retouching done by previous restorers.

The next test was an X-ray which helped understand the painting and Manet’s composition, including things he changed or hid. For example, the still life at the bottom of the painting was originally larger and Manet painted over sections with a grey-brown paint. The staff the ragpicker holds is vertical, but the X-ray showed that it was originally painted at a more diagonal angle. Also, there were black marks in the ragpicker’s face indicating thinner paint. According to Ormond, this is typical of Manet as he often made changes by scraping off dried paint. 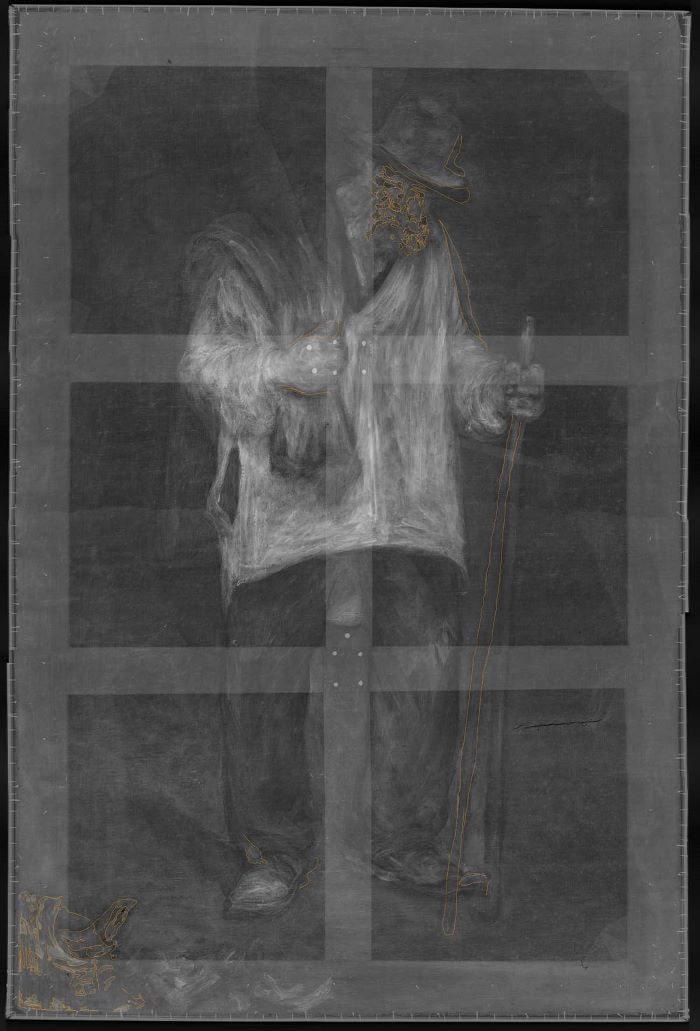 The Ragpicker under X-ray that shows the staff and still life changes. © The J. Paul Getty Museum.

“It’s kind of like cutting through a cake, we see all the layers of the painting” said Ormond. “We saw the blue florescence of the varnish and how it goes into the paint layers and saw the particles of the pigments – little black dots – which gave us an indication of how deep the varnishes penetrated into the paint.”

From the tests it was decided that fully removing the varnish would also remove the original paint and damage The Ragpicker because of the paint/varnish interaction. The goal was to thin the varnish enough to expose the brush work, fill in old damages and retouch them.

Now comes modern solvents which are the tool for removing varnishes that discolour and hide paint strokes and original paint. Ormond made a series of combinations of solvents and carried out tests with cotton swabs to establish the solubility of the surface coating. She tested tiny areas on the edge of the painting but also on main sections because of the different solubility of paint colours and how they respond to solvents.

Detail of the upper section of the painting taken in UV light showing the varnish thinned in the upper right corner. © The J. Paul Getty Museum.

“It’s worthwhile to do tests on the background, the darker colours, the lighter colours, the blues, the yellows, the greens . . . so you’re doing tiny, tiny tests to get a good overview,” said Ormond. “Once you establish the solvent and find something that is removing the surface coating without damaging the paint layer, you start cleaning using little swabs and dipping it into the solvent and very carefully applying it onto the surface until it starts to remove the varnish.”

Even the cotton swabs are a science. The swab material is pure cotton wool and conservators pull a piece off a tuff and twirl it around the end of a long wooden stick. By making swabs themselves, they know the content of the wool and eliminate possibilities of materials such as grit or tiny bits of wood in the cotton that could scratch the surface. Each swab is used for about ½ inch of the painting and here is where experience of the conservator takes over.

“Experience is huge in cleaning,” said Ormond. “Conservators must understand how much varnish is there, how easily soluble the varnish is. . . how the swab is behaving, understand with your hand the surface feel that changes as you apply the solvent, evaluating your swab for removing varnish quickly or slowly, even evaluating if it is getting stuck in the varnish.”

It took Ormond six months to remove the first layer of varnish using thousands of swabs and magnifying glasses to see the details. By focusing on minute details, she often had to step back and look at what her work was doing to the painting. For all the science involved, The Ragpicker is a painting not a scientific object.

“You want to have the cohesion of the image that was originally painted by the artist,” said Ormond. “My mentor’s key advice was ‘do not ever forget what it is that you are working on. It’s a painting’. . . Even though you want to get a pristine surface, it’s not worth damaging any original paint to get that.” 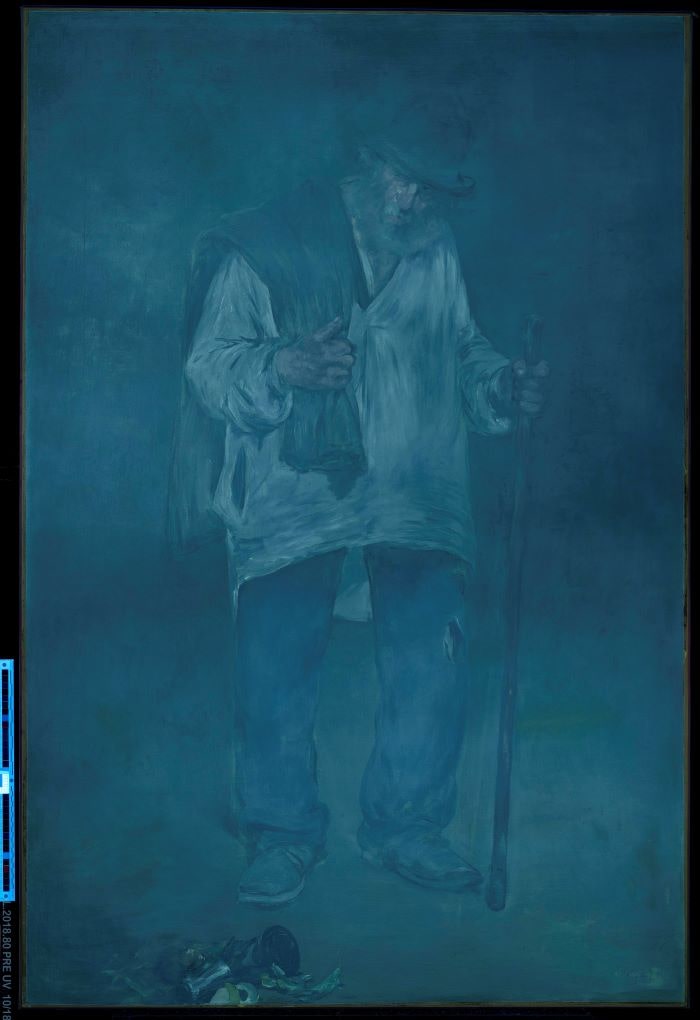 It was a challenging process where Ormond worked closely with the Scientists at the Getty Conservation institute to fully understand what had happened to the painting. Along with carefully thinning the old varnish, she also had to work around or repair past conservation techniques that did not have the advantage of current technology.

Today’s modern technology was a literal lifesaver for The Ragpicker. Many paintings have suffered from past conservation attempts. For example, the Mona Lisa had a spirits wash in 1809 that is now believed to have removed the top layer of paint, and over time the layers of varnish have given the painting a darker tone. Current conservation is involved around monitoring the painting’s environment to save La Joconde from any more damage.

But once finished, The Ragpicker took on a new life that honours Manet’s painting, his style and his original colours. It required today’s conservation technology and experts like Ormond and the team at the Getty and the Norton Simon to do the work that brings back as much light as possible to Manet’s ragpicker image.

See The Ragpicker at the Norton Simon Museum when it reopens mid-May.