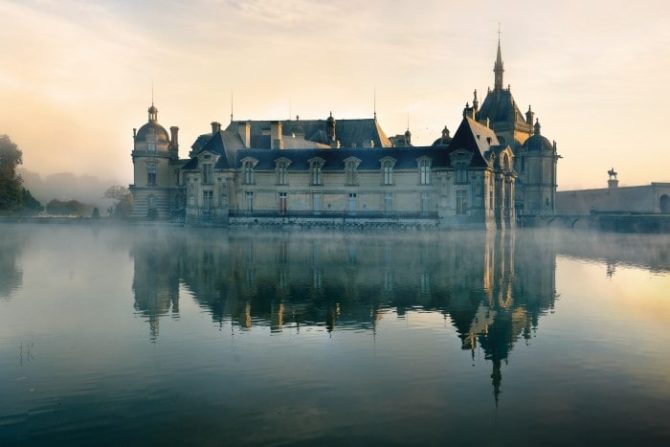 Priceless artworks, fabulous gardens and a unique equine heritage – the Château de Chantilly has them all. Gillian Thornton discovers the cultural legacy of the extraordinary Duke of Aumale.

You never forget your first sight of the Château de Chantilly, its towers and turrets, domes and chimneys reflected in the still waters beneath the walls. Barely half an hour by train from Paris, Chantilly is a gem of the Oise département and one of the must-see heritage attractions of Hauts-de-France.

The statistics are impressive too. The Condé Museum within its walls boasts the second largest collection of antique paintings in France after the Louvre, whilst the formal gardens include sophisticated water features and colourful flowerbeds designed by Le Nôtre. And the château’s magnificent Great Stables are Europe’s largest, home to the most comprehensive equestrian museum in France and with a full programme of live equestrian shows. For a culture-crammed day out or, better still, a relaxed short break, the Domaine de Chantilly takes some beating. If you could magically transport the château to the Loire Valley, its creamy stone façade would look thoroughly at home amongst the Renaissance castles of François I and his followers. And yet this fairytale property is something of an imposter.

There’s been a castle on the site since the Middle Ages but a sepia photograph taken in 1872 shows a very different style of home: still imposing, still moated, but a far more modest construction with a traditional mansion-house façade. 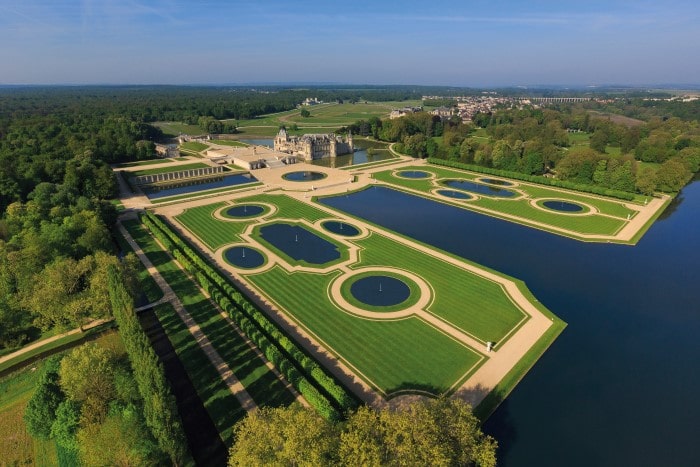 So who waved the magic wand to sprinkle Chantilly with fairy dust? Hard to believe, but the Domaine de Chantilly as we see it today is largely the work of one man, Henri d’Orléans, Duke of Aumale. Born in 1822, the fifth son of King Louis-Philippe, Henri inherited the domain from his great-uncle, Louis Henri de Bourbon, Prince of Condé, when he was just eight years old.

To understand why, you need to turn the clock back and meet a few of Chantilly’s previous owners. From 1643 onwards, the estate was in the hands of the Bourbon-Condé family, cousins of the Kings of France, and became the must-have Society invitation under Prince Louis II de Bourbon-Condé, magnificently dubbed The Great Condé. It was Louis who commissioned the flowerbeds and waterfalls from André Le Nôtre – future landscape supremo to Louis XIV at Versailles – and who hosted grand parties and magnificent firework displays in his showpiece gardens.

In the 18th century, Louis Henri, Prince de Bourbon-Condé, ordered the building of the Great Stables. Prime minister to Louis XV and a keen huntsman, he also had the suites in the Petit Château painted and created a porcelain workshop at Chantilly.

But the Revolution of 1789 saw the château redeployed as a prison and, in 1799, the main section was totally destroyed, its fine furniture and art treasures lost with it.

However, the Condés weren’t easily beaten. When exiled prince Louis-Joseph returned in 1815, he began to restore the suites, and commissioned an English-style garden. And it was his son, Louis Henri Joseph de Bourbon, last Prince of Condé, who bequeathed all of his property and vast wealth to his great-nephew Henri d’Orléans. 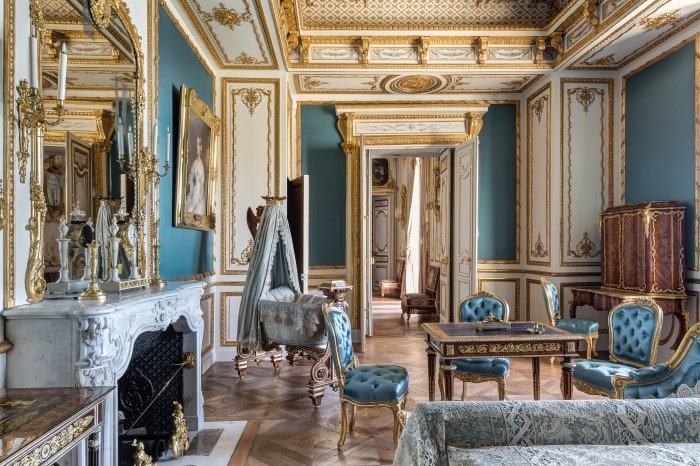 As a young man, Henri joined the military, becoming Governor General of Algeria in 1847, but always with his eye firmly on Chantilly. He had his private suites redecorated and made plans to rebuild the château in an even grander style.

Things went downhill again after the abolition of the monarchy in the 1848 revolution, but Henri took the opportunity of exile in Twickenham, England, to build up an art collection for his French home.

By the time he returned in 1871, Henri had lost his wife and both sons, and threw his energy into his home and into public life. The Duke commissioned architect Honoré Daumet to rebuild the ‘Grand Château’ to house his art collection; he became member of parliament for Oise; and he entered the Institut de France as a member of the Académie Française, the Académie des Beaux Arts, and the Académie des Sciences Morales et Politiques.

With no direct heir of his own, in 1884 the Duke bequeathed Chantilly to the Institut de France on condition that the Condé Museum be opened to the public after his death, that its layout be maintained, and that the collections were never lent out. The museum opened less than a year after his death in April 1898 and today, a visit to Chantilly is a unique opportunity to see artworks displayed exactly as the Duke intended, a 19th-century moment frozen in time. 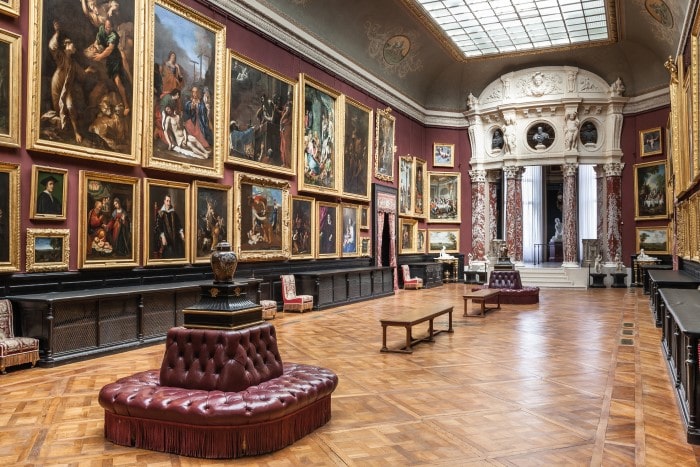 The castle is a treasure trove of fine art © Sophie Lloyd

But the Condé Museum is no static, dusty collection. Looking after an estate as large and prestigious as Chantilly is a huge responsibility and in 2005, His Highness the Aga Khan created a foundation for the safeguarding and development of the Domaine, mandated by its owners, the Institut de France.

Since then, a wide variety of renovations and restorations have been financed by a private-public partnership involving the French state, the Picardy region, and the Oise département, as well as the Aga Khan, the Institut de France and various private patrons. But development work always respects the conditions of the Duke’s legacy.

Step inside the Gallery of Painting and you half expect to see the Duke sitting on a red leather banquette, contemplating one of the huge canvases that cover every inch of wall space. More than 120 years after his death, he would find nothing out of place amongst the works by great masters that include Raphael, Ingres, and Delacroix. The Duke was also interested in the new art of photography and a collection dating from the 1850s includes more than 50 images taken by English photographer Roger Fenton during the Crimean War.

The Duke also set out to replace family treasures lost in the Revolution, gathering together the best of French decorative art from the 17th to 19th centuries, hence the sumptuous first-floor reception rooms, which are the last word in period bling, with their gold woodwork and lavish drapes, highly decorative panels and enormous chandeliers.

Among many unique objects are Louis XVI’s chest of drawers from Versailles, and a sofa and chairs belonging to Marie Antoinette. Look out, too, for examples of local black lace, immortalised in the 1950s hit record Chantilly Lace. The Duke was also amongst the leading book collectors of the age, commissioning a reading room and library as part of the Chantilly rebuild. Today the collections include almost 60,000 volumes, 8,000 maps and charts, 80,000 letters and 1,600 precious manuscripts, 360 of them illuminated.

But Chantilly was a home as well as a museum and the Duke’s private suites are located in the Renaissance part of the property, the ‘Petit Château’, accessible to small group tours.

Culinary Tales from the Castle

Used in gourmet desserts across the world, Chantilly whipped cream is an airy mix of cream, milk and vanilla sugar, that seems to have originated in the Prince of Condé’s dairy. The sweet, fluffy concoction was first served to VIP guests at grand receptions in the hamlet on the estate.

Taste the authentic recipe for yourself at La Capitainerie Restaurant beneath the vaulted ceiling of the old kitchens at the heart of the château, or in the Moulin du Hameau Restaurant in the hamlet. Ticket holders for a dressage demonstration or equestrian show can also enjoy a light bite at the Café des Écuries in the Cour des Remises. And if you’re dining at La Capitainerie, spare a thought for poor François Vatel, steward to The Great Condé. One Friday morning – a day when no meat was eaten – during a visit by Louis XIV in 1671, Vatel discovered to his horror that the delivery of fish was too small to feed the guests. He was so mortified, he chose to run himself through with his sword rather than face disgrace.

Beyond the flamboyant façade, Chantilly’s lavish gardens reflect changing fashions in garden design – flowerbeds, ponds and water features from the 17th century; an Anglo-Chinese garden and a rural hamlet from the 18th; and an English garden from the 19th with its ethereal Temple of Venus situated – of course – on the Island of Love. There are numerous fun ways to explore the grounds as well, from pedalo to luxury scooter to bicycle to golf cart.

This perfect plot is a delight in any season, but for a lifelong equestrian like me, the Domaine de Chantilly offers another big attraction, The Great Stables. Grandiose doesn’t even begin to describe this majestic building, commissioned in 1719 by Louis Henri de Bourbon, who, incidentally, believed he would be reincarnated as a horse. On either side of a huge dome, two 70-metre naves once housed 240 draught and hunting horses, with further boxes and stalls later added by the Duke of Aumale. 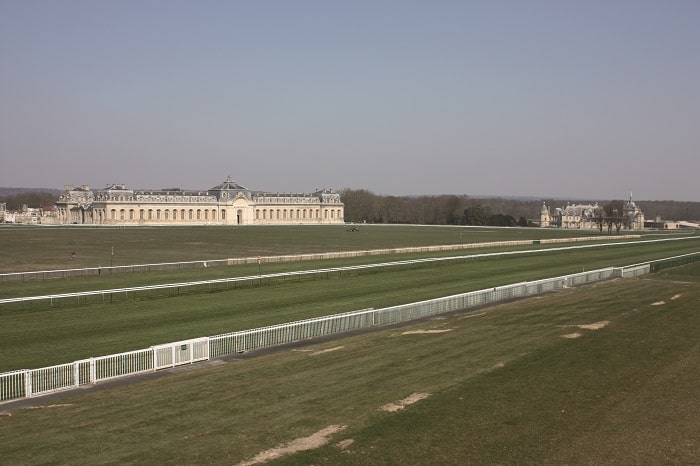 There have been horses living here almost continuously and in 1982, the building opened to the public as the Living Museum of the Horse, with 30 horses and ponies plus a series of exhibition rooms showing how humans have co-existed with horses across the centuries. Thirty horses still occupy the Duke of Aumale’s boxes. Mostly Pure Bred Spanish or Lusitano, they are used in the daily equestrian shows that take place beneath the dome under show director Virginie Bienaimé. Together with her sister Sophie, Virginie creates equestrian theatre that combines haute école dressage with acrobatics, music and circus. Expect starring roles too for assorted breeds of heavy horse, cute Shetland ponies and shaggy donkeys in a show that really does offer something for everyone.

Outside the stables, a striking equestrian statue of the Duke of Aumale looks across the adjacent racetrack to the grandstands of Chantilly Racecourse, founded in 1834 on the edge of the vast forest that lies at the heart of the French training industry. And today, Chantilly is one of the world’s most prestigious courses, staging regular meetings against this unique backdrop of grand castle and stable block. And all thanks to the legacy of Henri d’Orléans – collector, equestrian and visionary Duke of Aumale. 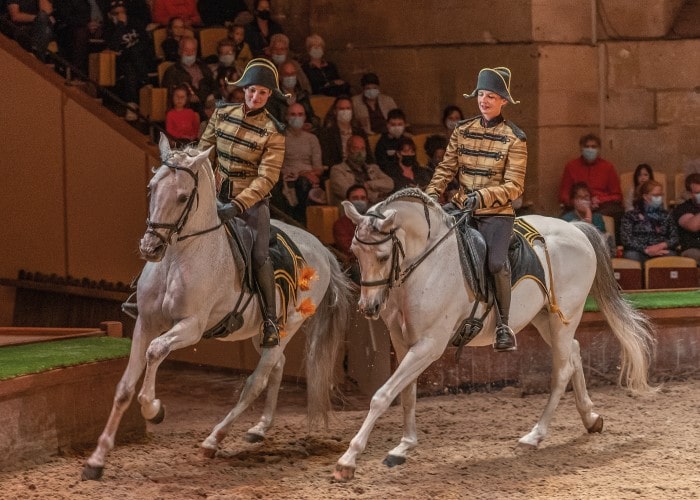 Getting There:
The Château de Chantilly is 20 minutes from Paris Charles de Gaulle airport by car (A3/A1 motorways), and 25 minutes by train from Paris Gare du Nord or 45 minutes on RER Line D (get off at Chantilly-Gouvieux). A free shuttle operates from Chantilly station at weekends and on French public holidays; alternatively, 25 minutes on foot, 5 minutes by taxi.

Opening Hours:
The château is open daily in summer from 10am to 6pm (park closes at 8pm); the Great Stables from 1pm to 6pm. Winter hours, 10.30am till 5pm; 6pm for park. Closed on Tuesdays.

The 1-hour equestrian show starts at 2.30pm beneath the Dome. Show and stables ticket €22; château, show and grounds €30. Relive Chantilly’s equestrian history with Once Upon a Time, the Great Stables, on selected days between September 12 and October 31 – check website for dates.