A Flâneur in Old Nice

Whether I turn left or right in Vieux Nice I get lost. No matter that I’ve walked throughout its labyrinthine lanes, browsing the shops and dining at most of the restaurants in this ‘village’ within a city. Its maze-like streets shift by some magic just to throw me off. I’m sure a shop is down one street, only to find it isn’t. I once had the best galette des rois in the world from a tiny patisserie here. I have never been able to find the shop again.

Serendipity is only a twist and turn away, however, and if the original shop/restaurant/bar cannot be found, I’ll stumble across something new. A boulangerie with its back door open, revealing an olive-wood-fired oven; a dishevelled workshop mending old bicycles; a hole-in-the-wall pasta store with plump, fresh ravioli and gnocchi.

For the early part of the 20th century Vieux Nice was left to its own devices. It consisted mainly of slum dwellings, rats and ruffians. It was not seen as a place to flâner. A surreal documentary film made by Jean Vigo in 1930, À propos de Nice, gives a flavour of life here then… 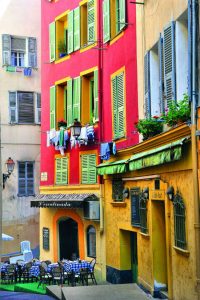 Silent black and white scenes show women washing clothes in the communal fountain; scruffy children carry on their heads huge trays of socca (a local pancake made from chickpea flour); an open sewer flows through the streets; men gamble with dice; there is a haunting shot of a young boy, his face covered in what appears to be scabies. This is juxtaposed against life ‘outside’ the village, with affluent ladies and gentlemen strutting on the Promenade. With his subversive eye, Vigo intercuts one elegant woman with a shot of a preening ostrich.

The Old Town still gets bad press today, but for different reasons. It is deemed, ironically, given its rather gloomy past, no longer authentic. When the second-home owners and speculators moved in, gentrification naturally followed. For large parts of the year the small streets swell with tourists and there is a plethora of shops of the made-in-Provence lavender bag variety.

If you dig deeper, however, there remain memories of the old world. Look up and you will see washing hanging from balconies (just as in Vigo’s film) and hear the clatter of plates as people prepare for the two-hour lunch. Socca is carted from the oven to the stall on a bicycle rather than on a head, but it is still the same recipe.

The important thing is that people live in the Old Town all year round, as they have always done. In fact there is little reason to go outside its walls as everything exists within them, from the daily market, the butcher shops with their snaking queues, to the fresh pasta shops and boulangeries. There is even a primary school and, incredibly, a public swimming pool, plus more than a dozen churches, all within a tiny space. Although it is safer to be a flâneur in Vieux Nice in the 21st Century, it still thankfully holds on tight to its authenticity. You just need to get lost now and again.

Previous Article From Fashion to Movies: Erté & the History of Art Deco in Paris
Next Article Paris Restaurants: Franco-Brazilian Cuisine at Bistro Paradis