First published: May 1, 2019 by Kristin Espinasse 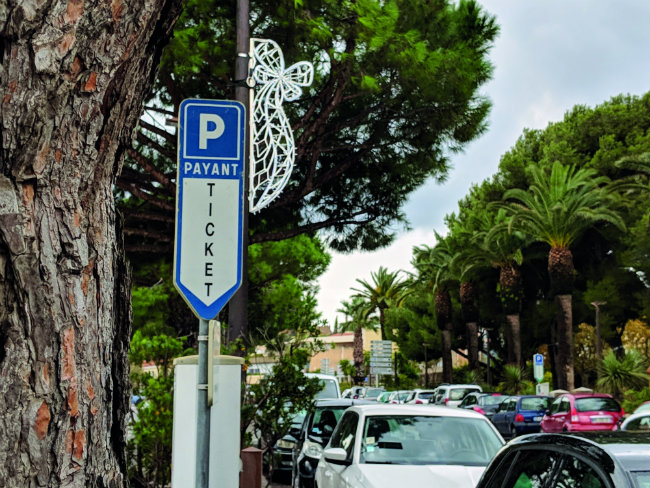 Returning home from my morning walk, I noticed my mom pacing in the garden. “Kristi,” she said. “The front gate was open.” The two of us turned to examine the wrought-iron portillon behind me. “It was open by about two feet,” Mom indicated, holding up her hands as a measure.

“I am certain I closed it,” I said. “Yes, I remember giving it a good shove!” There was no way I’d left that creaky old gate open, not with two adventurous chickens and a friendly Golden Retriever. Can you imagine the trio parading around La Ciotat, in traffic?

“Well,” Mom continued. “I saw a strange couple hanging out near the fence! He was tall and gangly and the girl had stringy, dark blonde hair. They did not look like they were from around here.”

So it was a couple of strangers who’d opened the gate! The shady pair must have fled when Mom appeared. Remembering my recent run-in with un cambrioleur, I speculated about their unsavoury intentions.

“They were casing our house! Yes, they must have said to themselves, ‘Blonde With Ponytail has just headed out for morning walk. On fonce!’”

As we stood at the gate, Papa, one of our resident tourterelles, hopped past with Golden Retriever Smokey trailing behind, bringing our attention back to the fence. Beyond the stone muret, a beat-up Peugeot 206 lingered. Mom and I peered past some sunflowers to get a better look at the bagnole with its chipped red paint.

“Really?!” my eyes narrowed as I searched for un homme dégingandé and his dirty blonde accomplice. How strange that they would remain dans les parages after an attempted break-in!

As if reading my mind, Mom added: “There were several policemen combing the street!”

Ah, so that’s it… The prowlers are hiding from les flics! Studying the getaway vehicle, I whispered dumbly to my fellow spy: “That car looks familiar…” The words barely out of my mouth, my daughter’s boyfriend’s mug popped into mind. A few more clueless moments passed when – eureka! – a more likely scenario surfaced, and it went something like this.

Returning home late last night, my daughter (the stringy blonde) sneaked her boyfriend (l’homme dégingandé) into the house. The lovers overslept when, “Putain! Je vais recevoir une amende!”, one of them realised he was about to get a parking ticket.

So the two hurried out to the street in time to put some change into the parking metre. And in their haste, they left the front gate open.

When my daughter confirmed the parking metre theory, I thought back to my silver-haired co-spy and our busybody assumptions and j’étais morte de rire. The supposed police officers Mom saw were in fact metre maids!