What to See and Do in Brittany 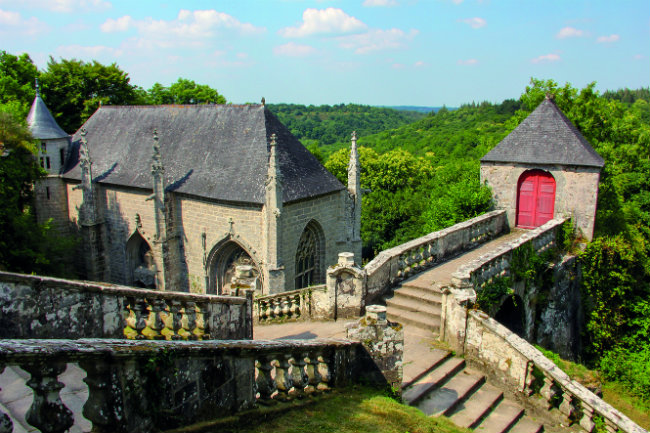 From historic châteaux to magical theme parks to sporting activities, Brittany has something for everyone

Known as the French Downton Abbey, Le Rocher Portail has been closed to visitors for many years but reopened in June 2017. Each of the 12 rooms in this listed stone and granite building are furnished in a different style from the château’s history. Keep an eye open for the secret passage. lerocherportail.fr

For a true taste of traditional Breton living, visit Quimper at the end of July when the town is taken back to its Celtic roots for a festival celebrating the very best of Brittany, with traditional music, dance and costume. www.festival-cornouaille.bzh/en

The picturesque town of Le Faouët largely escaped the industrial revolution thanks to its agriculture, making it almost a time capsule of bygone days. Countless artists from around the world have painted its gorgeous chapels, Saint-Fiacre and Sainte-Barbe. Many of these works can be seen in a converted convent just off the market square. www.lefaouet.fr

At the western end of the Lac de Guerlédan overlooking the canal de Nantes à Brest, the 12th-century Cistercian abbey is a must for lovers of contemporary art. As well as regular exhibitions, it hosts a weekly farmers’ market and a spectacular son et lumière in August. Legend has it it was built by Viscount Alain III de Rohan at the request of the Virgin Mary, who appeared to him in a dream. www.bon-repos.com

The Château de Fougères in the Ille-et-Vilaine département has been at the heart of struggles between various powers for centuries. At almost 1,000 years old, it is one of the largest medieval fortresses in Europe. Don’t miss the donkeys grazing in the castle courtyard! chateau-fougeres.com/fr

Explore the region by taking a guided trip from Nantes to Mont-Saint-Michel by way of little-known treasures, secret beaches, artworks nestled in lush landscapes, and excellent places to eat and rest… Billed as a modern journey through an old land, trips last eight days from April to October, though itineraries can be customised. www.voyage-en-bretagne.com

Brittany Boating provides relaxing boat holidays on the River Blavet and the canal de Nantes à Brest where you can kick back and soak up the scenery. www.brittanyboating.com 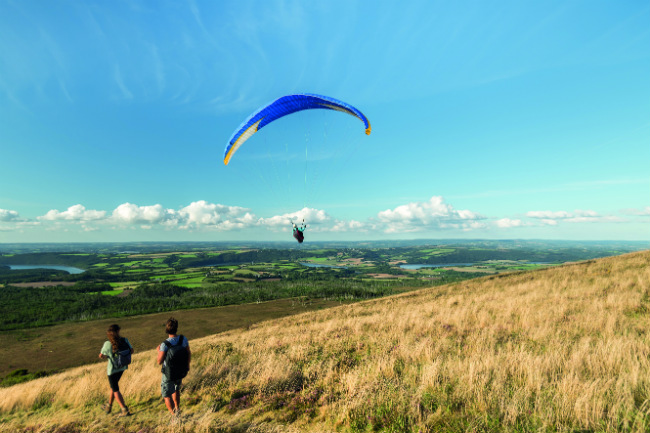 Even novices can take to the skies with the help of an experienced paragliding pilot. Photo: Emmanuel Berthier

To get a true feel for the landscape you can take to the skies with Air Nature Ballon, which charters flights all through the year from the picturesque gardens of Château de Bogard. If the wind is in the right direction, you can be taken out towards the beautiful bay of Saint-Brieuc. www.volmontgolfierebretagne.blogspot.com

If you fancy taking to the skies in a more adventurous manner, then give paragliding a go. No previous experience is necessary, as you will be accompanied by an experienced pilot on your first few flights. www.brittanytourism.com 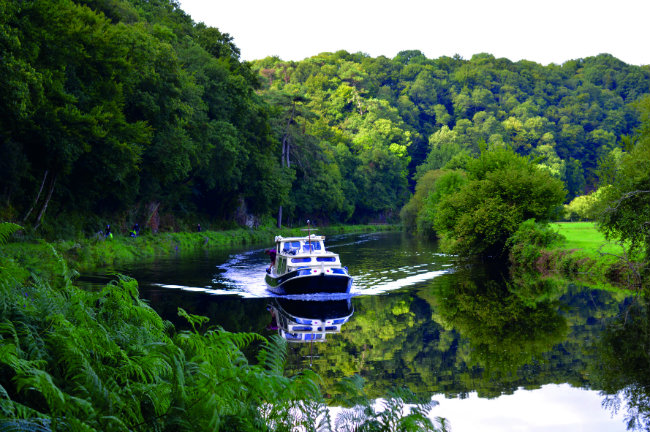 Take a relaxing trip with Brittany Boating, a charming way to explore the region

Who knew there was a little corner of Switzerland in Brittany? Just south of the region’s largest lake, Lac de Guerlédan, lies the forest of Quénécan, or Swiss Brittany as it has become known. The 11 square miles of woodland are home to more than 70 species of wintering birds. www.lacdeguerledan.com

Set in 33 hectares of wooded parkland, this is the only theme park in France dedicated to fairy tales and legends. Check out the live shows, jump aboard a themed train ride or explore on foot along the trails, where you can get up close to animals from all over the world. www.legendiaparc.com

This aquarium in Brest features marine wildlife in tropical, temperate and polar zones, including no fewer than seven species of shark. Don’t miss its virtual reality experience, ‘XperienSea 2019’! www.oceanopolis.com

If all this gadding about has left you in need of a little R&R, why not nip over the border to Pornic, an hour’s drive west of Nantes? This pretty little fishing port is home to numerous yachts and pleasure boats, and has no fewer than 12 beaches and coves nearby. www.en.pornic.com