New in Paris: Explore the Catacombs at Night 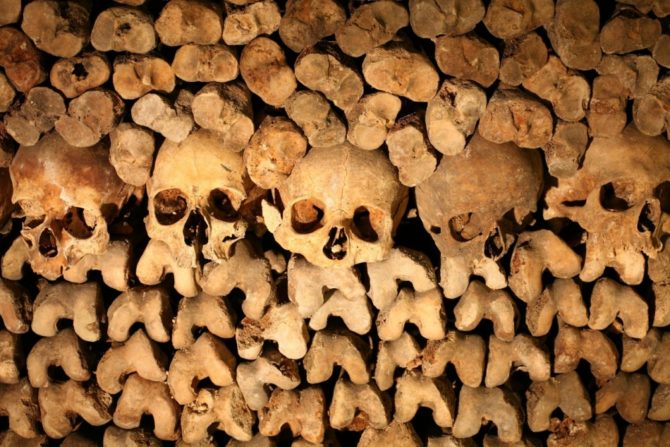 One of the most exceptional sites in Paris is the Catacombs, a subterranean labyrinth of tunnels situated in the city’s ancient quarries. A small portion of these underground passageways is open to the public and officially managed by Les Musées de la Ville de Paris. Stretching two kilometres from place Denfert-Rochereau in the 14th arrondissement, the Catacombs are home to an ossuary where human bones were transferred from the Cemetery of Innocents in 1786 when it was closed for public health reasons. Many of the medieval graveyards in central Paris were overflowing, and the bones of some six million Parisians were therefore moved to the ossuary, where they were arranged in orderly walls.

When it opened to visitors in the early 19th century, the Catacombs became one of the city’s  earliest tourist attractions- a contemplative (and spooky!) place to ponder the meaning of life and death. The nobility dressed to the nines for these excursions, sometimes even hosting dinner parties and concerts in the caverns. To this day, the site attracts thousands of annual visitors, often standing in line for hours to buy their tickets and descend underground.

To improve the visitor experience, the city of Paris recently expanded the hours of operation, so the Catacombs are open an additional three hours a day. (Instead of closing at 5 pm, they close at 8 pm.) To mark the occasion, France Today attended a nighttime tour with Sylvie Robin, Chief Curator of the Archaeological Department of the Carnavalet Museum and the Catacombs. We marveled at the extraordinary sculpture reliefs carved by a quarry worker, 18th century graffiti etched into the walls, illuminated water wells, and an exhibit featuring the fossilized shells found underground. Indeed Robin stressed the importance of the site’s geological heritage, as Paris used to be covered by the ocean, and the layers of rock bear witness to this geological history.

The Catacombs developed a reputation as a scary place– best left alone– because of the smugglers who used the tunnels to avoid Customs at the gates of Paris. They would create all kinds of commotion with lights and noises to keep the Parisians away from their illicit activity. And so the legends were born.

As you make your way towards the ossuary, you are confronted with a stone sign that reads: “Stop, this is the empire of Death.” Pass through the gate and you’ll gape at walls of skulls and carefully stacked femurs and tibias. You’ll notice plaques of poetry and maxims with philosophical proclamations. (For example, “Live each day like it is going to be your last.” – Horace). Director Valerie Guillaume pointed out that when the Catacombs was first opened as a tourist site, it was meant to be a philosophical place, an underground parcours that inspired meditation. Many of the quotes should be appreciated within their cultural context of the Age of Enlightment.

Practical Information: The entrance fee is 10 euros, and admission is free for individuals under 18 years old. Not suitable for visitors with heart or respiratory problems, or young children. Note: The visit requires descending 130 steps, then ascending 83 steps after walking for two kilometres. The temperatures underground average 14 degrees Celsius, and it’s important to wear closed, non-slip shoes as the pathway can be a bit slippery. No cloakroom or toilets are available during the visit. In 2015, the city will unveil a new exit from the Catacombs, which will slightly shorten the visit underground, hence expediting the experience, as only 200 visitors are allowed underground at a time.