Out of the Shadows: Omaha Beach Revelations at Maisy Battery 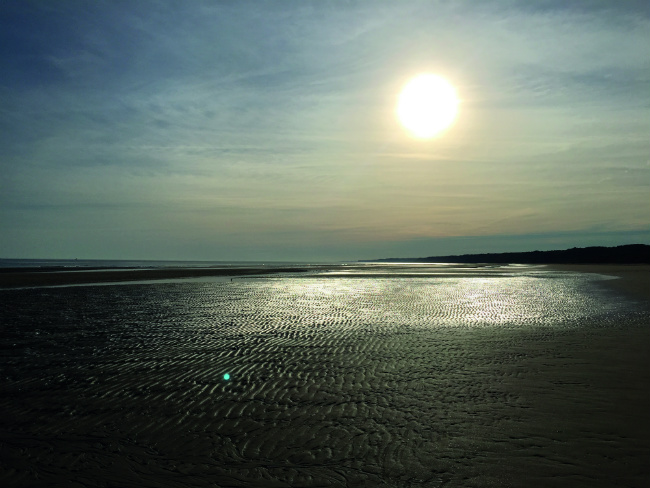 The 75th anniversary of D-Day this year could be the last ‘big’ commemoration to include men who took part in Operation Overlord in June 1944. Books have been written, movies made and museums set up in their memory, but as I stand in a rough eld near the Calvados coast, I am acutely aware that here at Maisy Battery, a new story is only just beginning.

Events here were inextricably linked to the assault on Pointe du Hoc by the 2nd US Ranger Battalion on June 6, 1944, and yet Maisy barely warrants a paragraph in the history books. For more than 60 years, this vast German complex lay hidden beneath the soil until it was uncovered by British military historian Gary Sterne in 2004. Today, Maisy Battery is the most authentic military site connected to D-Day
– le débarquement to the French – with a unique atmosphere. Nowhere else can history fans and remembrance visitors experience the atmosphere of exploring trenches and underground buildings. 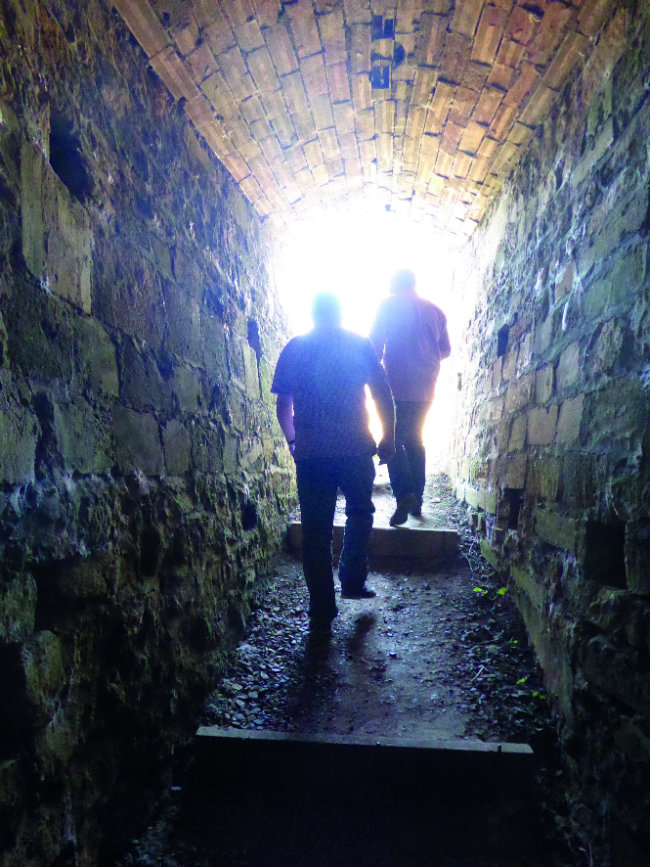 Exploring one of the underground bunkers at Maisy Battery. Photo: Gillian Thornton

International lm fans already know the story of Omaha Beach, the code name for an 8km stretch of wide-open sand between Vierville-sur-Mer and Saint-Laurent-sur-Mer – or they think they do. The 1962 movie The Longest Day showed how the 2nd Rangers scaled the sheer cliffs at Pointe du Hoc while suffering heavy casualties, only to find there were no guns there. And in Saving Private Ryan, released in 1998, Stephen Spielberg pulled no punches in showing young soldiers mown down by German fire-power. But not, it seems, from the top of that cliff.

Gary Sterne had long felt that something about the accepted story of Omaha Beach didn’t add up. And now Hollywood is interested in the rights to his new book, The Cover up at Pointe du Hoc, which sets the record straight. Based on painstaking detective work in US Army archives, the two volumes took four years to complete and are packed with original documents. 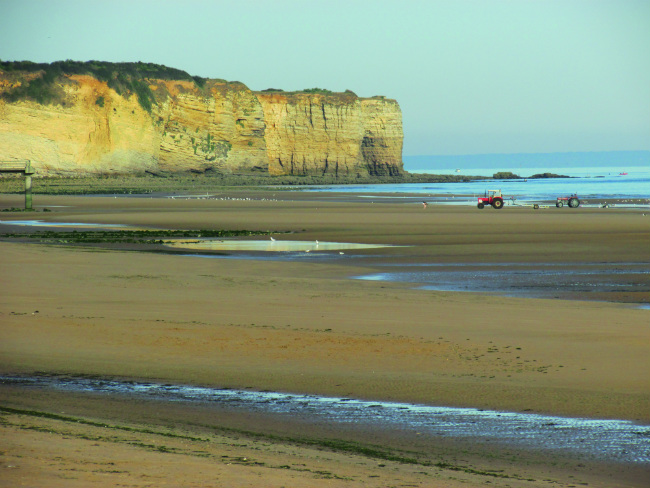 “Two American companies are interested in the film rights and I’ve also had a team on site filming for a hit US TV show on the stories behind historic places,” says Gary as we set off towards the trenches past a collection of D-Day weapons and landing craft. “A movie would be wonderful but my goal all along has simply been to see the true story recorded in the history books.”

It was only when official records were published in 2004 that Gary was able to start digging deeper into the story. Literally. The British collector and dealer in World War II memorabilia already owned a property in the Calvados département of Normandy, location for four of the five D-Day beaches. But Gary still had no idea what was on his doorstep until he acquired a map showing an ‘Area of High Resistance’ to the west of Grandcamp-Maisy and began to look more closely. 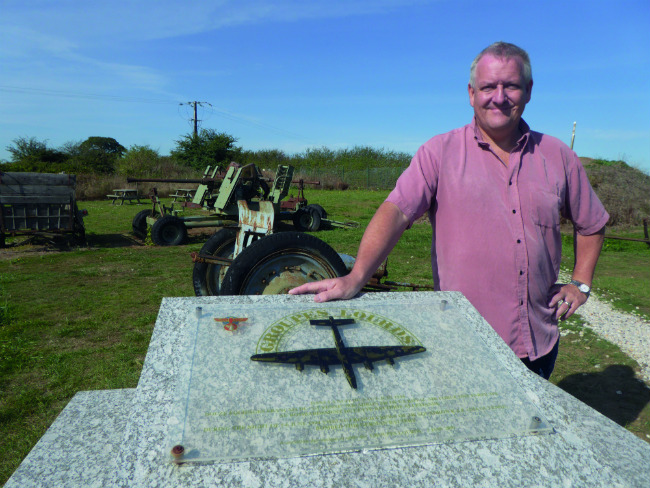 Hunting around in the thick undergrowth, Gary discovered substantial pieces of concrete. Intrigued, he persuaded the landowner to sell him a large area of rough eld and set about excavating with a digger, a shovel and a couple of friends. The rest is every historian’s dream. Little by little, Gary unearthed gun emplacements and ammunition stores; an underground hospital building packed with medical bottles; several personnel bunkers that would have housed 20 men day and night; and a wood-panelled commandant’s office.

“The panelling unfortunately disintegrated within days of being exposed,” says Gary, taking me inside the suite of rooms that was once the subterranean nerve centre of Maisy Battery. “I disposed of the hospital poisons safely, of course, but I’ve kept huge amounts of other memorabilia and it is all being kept for a future museum project.” 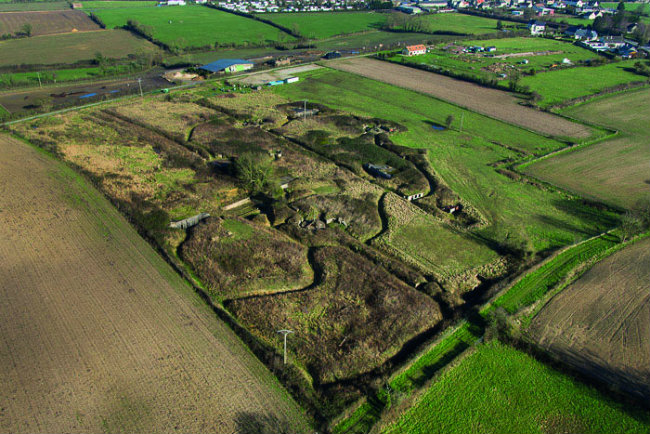 Over the intervening years, Gary has bought additional land, much of it still to be excavated. And still there’s more. He points out a line of bunkers on neighbouring farmland, peeping coyly above the crops in a defensive ring. And he knows the whereabouts of at least two more underground hospitals.

“I did wonder what the locals would think about me literally digging up the past,” says Gary, who began collecting militaria at the age of eight after being given a set of medals by an elderly neighbour. “But most have been hugely supportive. They simply want to commemorate the US 5th Rangers who fought so hard at Maisy on their behalf.”

Begun in 1940, Maisy covered a vast site of around 144 acres, set back a mile from the beach and tucked behind a small promontory, invisible from both the
sea and the coastal road. The fire-power was huge, the battery’s Howitzers trained on Omaha Beach to the east, but also west across the water to Utah Beach, which lies at right angles to the Calvados coast. 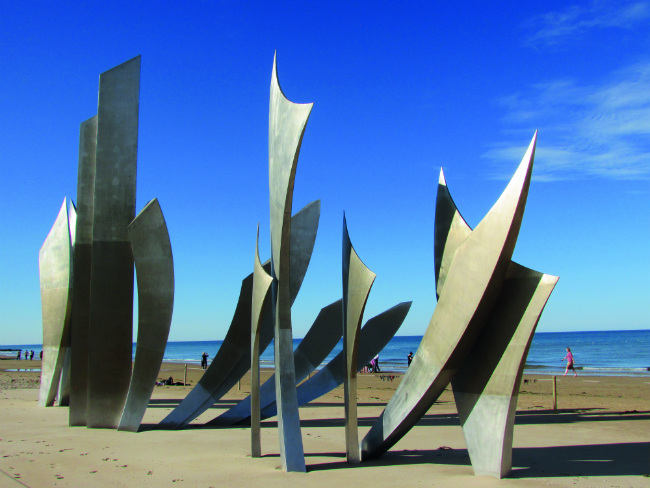 In the tense summer of 1944, some 350 men were stationed here, but the day before the American assault, records show that 1,000 Luftwaffe soldiers were also drafted in. It took the US 5th Rangers three days to reach and then take Maisy, but their exploits barely feature in the history books, with most instead concentrating on Omaha Beach and Pointe du Hoc.

Over the past 15 years, Gary has interviewed a dwindling number of veterans from the 2nd and 5th Rangers and even welcomed some back to Maisy. Each had a unique memory of the attack and of their own personal orders. But with new access to the official records for that day, Gary has at last been able to prove that Maisy was their official target for D-Day. So why is there nothing in the history books? 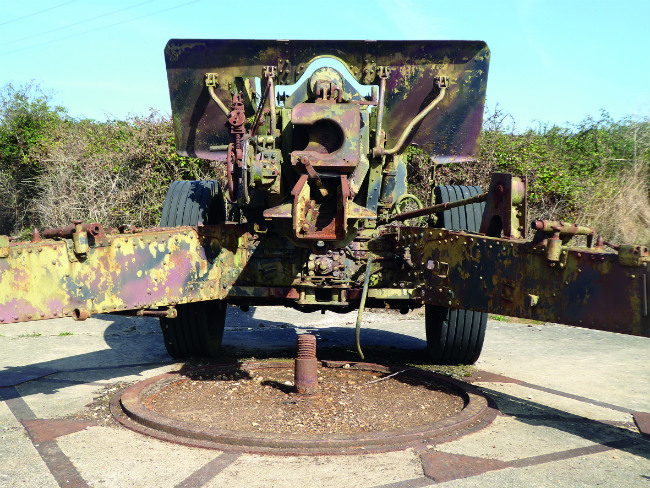 It would all seem to be down to one man’s ambition to be a war hero, to ignored intelligence reports, and to a cover-up by the US military to save face. And now, after four years of painstaking research, Gary has uncovered the evidence in US Army archives to prove why Maisy was figuratively brushed under the carpet and literally buried under tons of earth.

Stand today in Maisy’s deep trenches, widened for public access but otherwise little altered, and it’s easy to imagine the horror of those three days in June 1944. “We draw a fine line between making the site safe for visitors and taking away its authenticity,” says Gary, who first opened Maisy to the public in 2008 and now runs it with his son Daniel. “Visitors can follow the numbered information panels at their leisure or pre-book a guided tour with Dan or myself for the full background story. 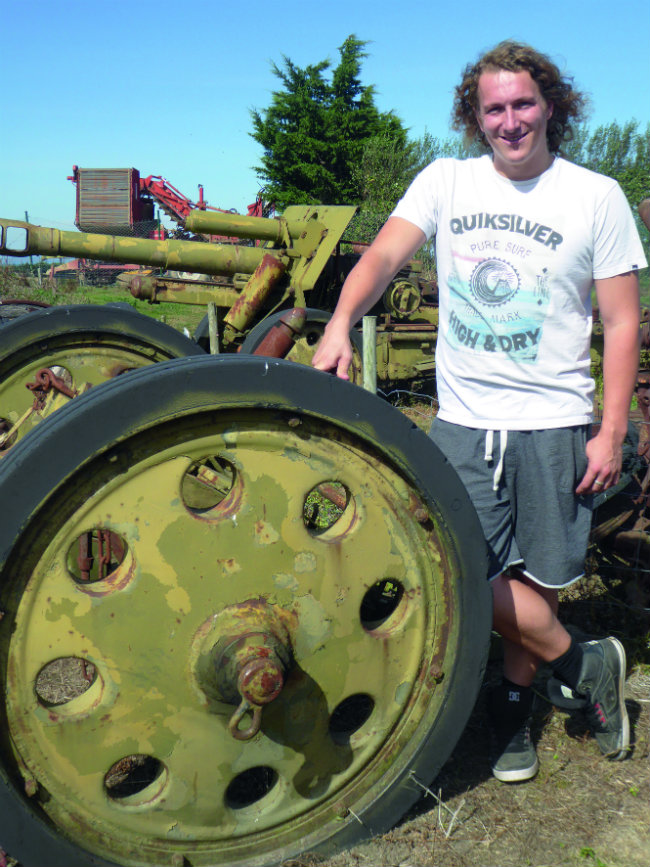 “We welcome lots of French and English school parties, as well as military history enthusiasts, but it’s difficult to pull in casual visitors. You can’t see the site from the road because the Germans designed it to be hidden, and as yet we have no visitor centre or museum, just a small portable building that serves as a shop and ticket office. So every day we watch cars drive down the lane and turn round, thinking that Maisy is just a few old bits of weaponry. They can’t see what’s hidden in the fields all around them. Local guided tours tend to favour the free sites, while we charge a few euros for adults to help with our running costs. But nobody who comes here leaves disappointed, which is confirmed by our positive TripAdvisor comments. And by the 75th anniversary in June, we hope to have a small visitor centre in the car park, which will make us more visible.” 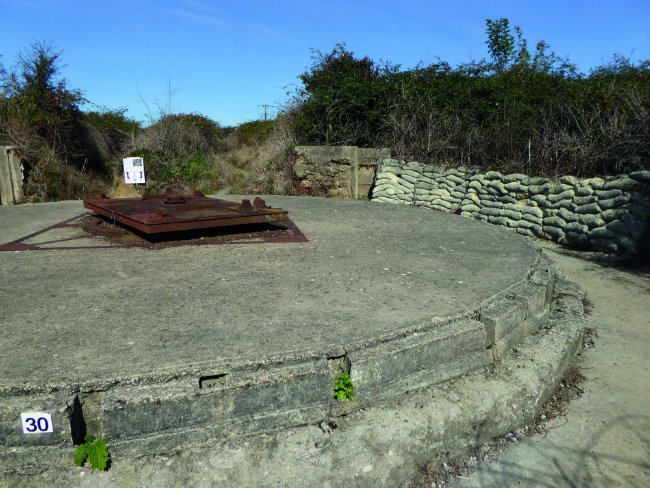 Sandbagging is being installed round the gun emplacements to show how it would have looked in action. Photo: Gillian Thornton

Gary still receives regular gifts of D-Day memorabilia from local residents, which will one day form part of a museum collection. Dan also does a weekly trawl of Calvados car boot sales for authentic artefacts to sell in the battery’s shop.

“But Maisy is not all about making money,” says Gary firmly. “It’s about giving credit where it is due and about telling the truth. Nothing takes away from the 2nd US Rangers who bravely stormed the cliff at Pointe du Hoc, but it’s high time that the 5th Rangers received credit for the bravery they showed here at Maisy. We have our fingers crossed that at least one Ranger veteran will come back this coming June for the anniversary, but in the meantime hopefully the world will soon know their story.” 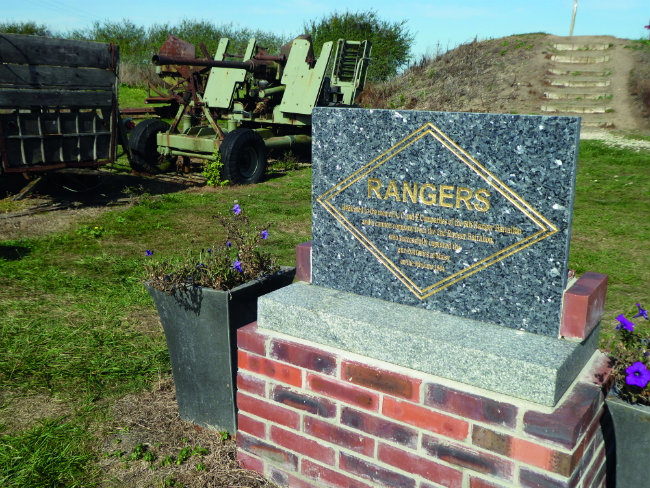 Monument to the US Rangers who captured the gun batteries at Maisy on 9 June 1944. Photo: Gillian Thornton

Maisy Battery is 45 miles (around 75km) – from the Brittany Ferries terminals at both Caen-Ouistreham and Cherbourg. For booking details, go to www.brittanyferries.com.

Gary Sterne’s book The Cover up at Pointe du Hoc is published in two volumes by Pen & Sword, and costs £75 for the two. Signed copies can be ordered via the website: www.maisybattery.com. 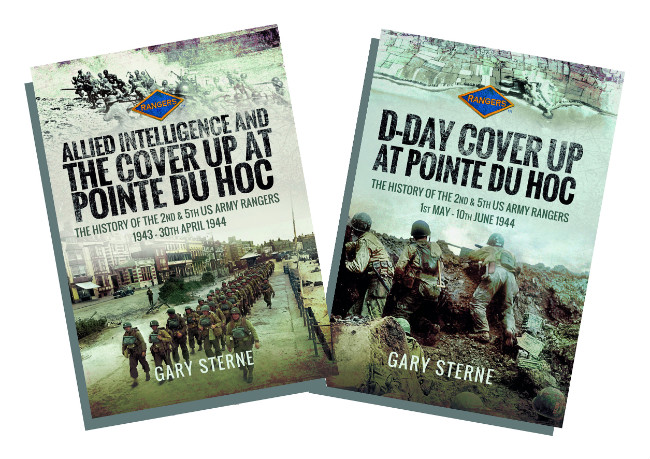 Located on the ring road to the north of the city, Caen Memorial is a museum to peace, telling the story of the conflicts that followed World War I in Europe. A substantial section already covers the D-Day Landings, but a temporary exhibition (from June until October) will showcase more than 50 paintings by American artist Norman Rockwell illustrating President Roosevelt’s ‘Four Freedoms’.

New from June is a 360-degree film in a purpose-built building that will pull together the history of the 20th century in Europe and reflect the memorial’s various permanent exhibitions. Included in the general admission price. Entry €19.80; concessions, €17.50; under 10s, free. www.memorial-caen.com 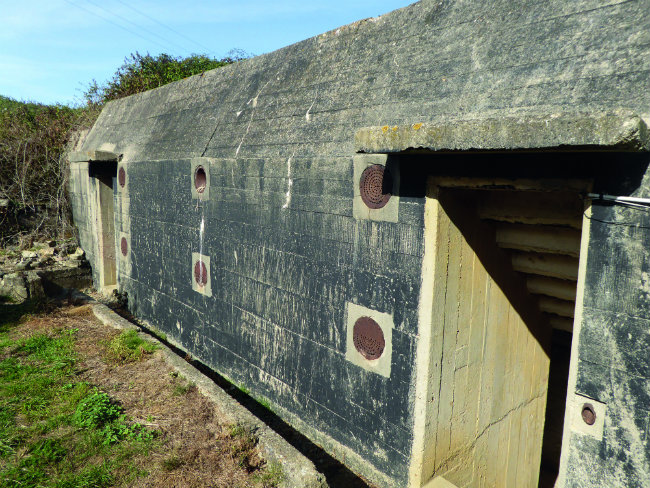 Pointe du Hoc, with lookout platforms installed on the cliff edge, is freely accessible to visitors. It’s humbling to imagine the US soldiers scaling the cliff and to see the crater-ridden headland, though the immaculate American cemetery at Colleville-sur-Mer with its lines of gleaming marble crosses is far more atmospheric. The visitor centre tells the story of individual soldiers, as well as giving a general overview of the assault on Omaha Beach. Opposite the cemetery, the Overlord Museum houses a private collection of military equipment and uniforms.

But best of all is to simply walk along the beach at low tide and soak up the vast open vista of sea, sky and sand. “I never walk my dog along the beach without lifting my eyes and giving thanks for all the young Americans who came here to fight for our freedom,” says Isabelle Payot, owner of La Sapinière, a family-friendly seaside hotel at Saint-Laurent-sur-Mer.

Cutting through the dunes in front of the hotel, I discovered the Charles Shay Indian Memorial that honours 500 American and Canadian Indian soldiers who took part in the D-Day operation – and in particular the 175 at Omaha. Charles Shay was a medic from Maine who was decorated for selflessly carrying wounded comrades. Then walk along the sands to the dramatic stainless-steel monument, Les Braves, by sculptor Anilore Banon at Vierville-sur-Mer, and on towards Pointe du Hoc.

Previous Article Terre Blanche: A Five-Star Hideaway in the South of France
Next Article Restaurants in Paris: Rooster, Run by Chef Frédéric Duca