We Will Remember Them: New Memorials and Museums 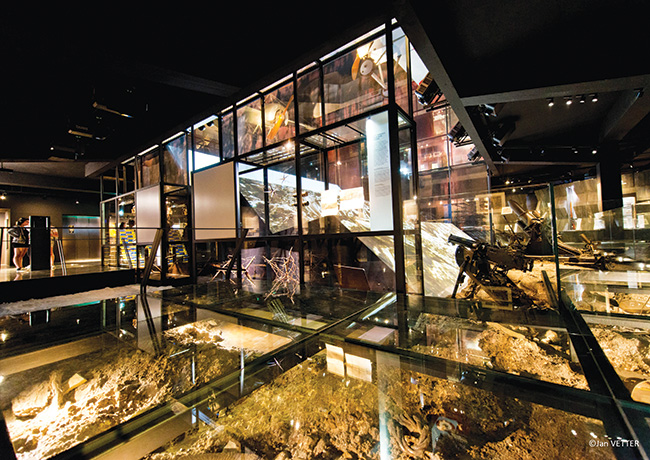 France Today is honoured to work alongside tourism partners in France to keep readers informed of news, innovations and events from the country’s many war remembrance sites. Covering both world wars, and from Calvados in Normandy down to Meuse in Lorraine, here we provide a round-up of new recommendations and incontourables including museums and cemeteries.

June 2022 marked the 78th anniversary of the D-Day landings on the Norman coast, which sparked the Battle of Normandy to force the endgame for Hitler’s German occupation of France – within a year the war was finished. Allied forces endured almost 10,000 casualties; more than 4,000 were dead, among them 2,499 Americans.

Every year, fewer and fewer veterans – all now in their 90s – make it to France to honour their fallen comrades, but French authorities continue to salute the bravery of Allied soldiers with the utmost deference and gratitude.

As they do every year, this summer many tourist offices in the region came together to coordinate the D-Day Festival, stretching from Pegasus Bridge to Sainte-Mère-Église (where nearly 13,000 American paratroops dropped under a full moon including, famously, Private John Marvin Steele, who landed on the church steeple), passing through Ouistreham, Arromanches, the Pointe du Hoc, and the five emblematic landing sectors (Utah Beach, Omaha Beach, Gold Beach, Juno Beach and Sword Beach). While it had a commemorative feel, it was more a celebration of liberation, with parachute displays, parades, concerts, historical re-enactments, exhibitions and lots of dressing up. Visit the festival’s Facebook page for images and videos including a fly-past by the French Air Force’s elite La patrouille de France.

There are many superb museums to explore on a D-Day commemorative visit – too many to list here. But among our recommendations is the Utah Beach Museum, constructed on the very spot where American troops landed on June 6, 1944. The first beach to be stormed by the Allies, it was chosen as a beachhead in the Cotentin region to facilitate the capture of the port of Cherbourg. The museum recounts the story of D-Day in ten sequences, from its preparation to its successful conclusion, including the amphibious assault, primarily by the US 4th Infantry Division and 70th Tank Battalion.

Another is the excellent Airborne Museum in Sainte-Mère-Église, which showcases the parachute drops and brave fighting by US paratroopers of the 82nd and 101st Airborne Divisions. Those planning a trip to the D-Day beaches next year, as well as for what promises to be a massive 80th anniversary commemoration in 2024, should start thinking about their trip now – event planning is already well under way.

Among the other events in Normandy this summer was a moving gathering at The British Normandy Memorial in Ver-sur-Mer. The memorial, which opened a year ago, records the names of the 22,442 servicemen and women under British command who fell on D-Day and during the Battle of Normandy in the summer of 1944.

With the public able to attend for the first time (due to Covid restrictions), proceedings commenced with Retired Wing Commander Steve Dean, Project Manager for the British Normandy Memorial, and Myles Hunt, Head Gardener, raising the Union Flag at sunrise, just as the first troops would have landed 78 years ago.

Wreaths were laid, D-Day Veteran and Trust Ambassador Joe Cattini was on hand for a live BBC interview, plus there was a memorial service, a Spitfire fly-past and music from the band of the Yorkshire regiment with the Jedburgh Pipers, all in the presence of veterans and their families, plus the British Ambassador to France Dame Menna Rawlings.

In other developments in Calvados, a new D-Day Museum will open in March 2023 in Arromanches-les-Bains, site of the celebrated pre-fab Mulberry port. Construction is well underway, with the concrete frame in place and soon to be covered with glass. The building is 44m long and 28m wide and will be completed in October this year. The second phase – including the destruction of the current building, which will close to the public on November 1 – is set for completion in January 2023. The €10m museum will use state-of-the-art technology to bring the artificial port back to life, though the current showpiece will also have pride of place – an original model from 1954 explaining the construction, transport and operation of the artificial port, set up by British engineers to allow the landing of men and equipment after the establishment of the bridgeheads on the Normandy front.

Meanwhile, the German battery at Longues is getting a spectacular facelift, due for completion imminently, to better welcome visitors. The old wooden huts that housed the tourist office and sanitary facilities are being given a €2.8m upgrade in the form of a vast new reception area with glass walls. Finally, the Wings museum in the historic aeronautical hangars in Caen-Carpiquet opened in May 2021. It looks at the role of D-Day planes and the bold missions undertaken by their skilled pilots. It has an educational yet fun ethos – youngsters can get into cockpits and play at being tail-gunners. The museum has just taken delivery of a Beechcraft 18 (a C-45 in military parlance).

Contacts: We recommend adding these regional tourist office websites to your internet favourites to keep abreast of all events and travel options:
www.calvados-tourisme.co.uk
www.manche-tourism.com
en.normandie-tourisme.fr

The sheer scope of death and destruction wrought upon the people, landscapes and, of course, serving soldiers from both sides across swathes of north and eastern France (including the Somme and Verdun) during the First World War is unimaginable. There is an ever-expanding and ever-improving roster of museums, cemeteries and more to bring the heat of battle, historic context and personal tales of bravery, tragedy and hope to life in memoriam.

Focus your plans on the departments of Pas-de-Calais, Somme, Meuse, Aisne, Ardennes and Marne, always plan ahead and don’t try to fit too much in – there are dozens of what the French call ‘incontournables’ (unmissables), so it’s important to research your preferences. The major players that give sweeping contextualisation and visceral, in-your-face tech and noise include the Musée de la Grande Guerre (Meaux, Seine-et-Marne); Historial de La Grande Guerre (Péronne, Somme); and Mémorial de Verdun (Meuse).

At the latter, running until December 31, the exhibition ‘Art/Enfer – Creating in Verdun 1914-1918’ showcases artworks made in the hell of battle or behind the front lines, with paintings, sculptures, music, writings, drawings and more created by both French and German soldiers.

We also recommend The Musée du Chemin des Dames in Oulches-la-Vallée-Foulon, the most-visited museum in Aisne; and the Caverne du Dragon, an underground tactical stronghold from where you can explore the Chemin des Dames Memorial Trail. In Arras, Pas-de-Calais, don a hard hat and descend the evocative Wellington Quarry dug by Kiwi sappers.

On subsequent trips you may choose to go farther off the beaten track to enjoy smaller museums, often passionately curated on a shoestring budget, or borne of personal, intimate collections of memorabilia and artefacts. These include the Somme 1916 Museum in Albert, Somme.

New in Meuse is Les Poilus de Verdun, Museum of the Guardhouse, a museum about the poilus (the nickname for simple infantrymen from rustic backgrounds), which is housed in the former guardhouse located in front of the Underground Citadel of Verdun. Visitors will discover the private collection of Camille Tridon: drawings, photographs, objects and costumes of the poilus. A store selling military antiques will be available, as well as a small restaurant.

Among the many vast and poignant cemeteries at which to pay your respects to the fallen, there are some spectacular sights: iconic Vimy Ridge near Lens (Pas-de-Calais), built to honour Canadian soldiers; Douaumont Ossuary in Meuse, a stone monument containing the unidentified bones of at least 130,000 French and German soldiers killed at Verdun and, in the Somme, the Thiepval Memorial honouring the 72,194 British and South Africans.

However you wish to honour the heroes of the Great War, there are sites across this region of France dedicated to all the nationalities who served.