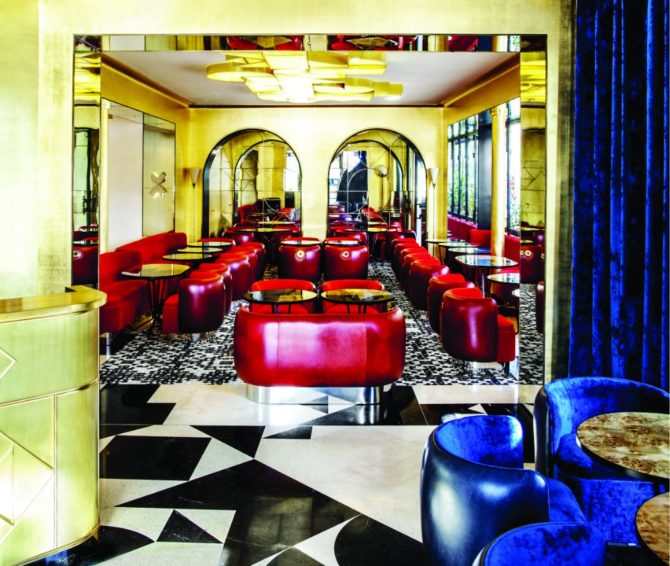 France is fast becoming the creative hub for some of the world’s biggest award-winning names in hotel design, from India Mahdavi to Jean-Philippe Nuel and Pierre-Yves Rochon to Philippe Starck. We spotlight the designers who are most sought after by hoteliers and restaurateurs, for whom having the right artist onboard is crucial to an establishment’s success. Hotels are no longer just about comfort and functionality, and restaurants are no longer just about food– what people want to know is who the designer is. These seven contemporary players are designing everything, inside and out – rooms as well as restaurants – and probably have their eye on a space near you.

The Tehran-born, world-educated and Paris-based designer India Mahdavi never ceases to affirm that she is “polyglot and polychrome”. Since opening her studio in 2003, Mahdavi has unleashed audacious combinations of fabrics, colours and patterns – zebra and British 1960s ‘flower power’-style prints – which somehow work perfectly together. Harmonious, adventurous and ‘totally out there’, India is a citizen of the world but primarily of Paris.

“The place is the starting point of the story and of any project,” she says. “Each story is different, and thus each of my projects is unique, each one is like a first time.”

Another name that’s been very involved in designing high-end hotels and restaurants across the world is Pierre-Yves Rochon, who’s been sought after for his timeless taste in European classicism, especially French-style, since 1979.

The designer has left his footprint upon Paris with his latest accomplishments, which include the renovated Hôtel Prince de Galles and Hôtel Montaigne, the Grand Hôtel du Palais Royal plus the restaurant and wine cellar Les Caves de Taillevent. His blockbuster projects also count the bar at revamped Hôtel Le Bristol, the iconic Four Seasons George V, the Shangri-La Hôtel, Paris, as well as the elegant Le Domaine Les Crayères in Reims and l’Hermitage Monte Carlo.

The industrious Rochon has received commissions from Austria to China, including London’s The Savoy and Four Seasons hotels. He’s in demand for his ability to keep things sophisticated but fresh and with comfort at the forefront.

Jean-Philippe Nuel’s revival of a Parisian deco icon, the Piscine Molitor (look out for a review in the next edition of France Today), has just been completed and both the very slick hotel Cinq Codet and the Renaissance Paris Hippodrome are due in summer 2014. The prolific designer is also working on the Cures Marines Trouville, a hotel and spa to open next year, and outside of France, on the Taj Pondicherry in southern India.

“Creating the magic within a hotel is to evoke a slice of a dream,” says Nuel, a Beaux-Arts graduate, “and a designer’s role is to conceive a world that will not be a mere working interior but an entire atmosphere, a veritable identity; the veritable personality of the hotel.”

Nuel started out as a furniture designer and architect, set up his design studio in 2000 and began designing interiors in 2005. He is now one of the world’s most in-demand designers of boutique and large-scale hotels. An eminent Nuel project that we recommend is the InterContinental Marseille Hotel Dieu, which opened last year and could serve as a flagship for the Intercontinental Hotel Group. We made the Hotel Dieu a France Today ‘Hotel Selection’ for 2014 in our February/ March 2014 edition and Nuel’s subdued, elegant, snug and utterly soothing design is irresistible to the eye and touch.

The fresh and sharp design of Dorothée Meilichzon has transformed many Parisian venues into veritable institutions. Her creations include The Fish Club, The Beef Club, Prescription Cocktail Club, the two healthy Café Pinson eateries and the cosmopolitan Hôtel Paradis.

Meilichzon’s contemporary designs are very much in vogue. She set up her studio and was assigned her first project in 2010, the successful Experimental Cocktail Club (ECC) (37 Rue Saint-Sauveur, 2nd). Cool, always very calm and collected, her retro style is drawn from different historical periods and complimented with carefully chosen bric-a-brac from brocantes or auctions, which affords her spaces just enough of a personal touch without them falling into disarray.

The designer has also worked abroad with the ECC and Compagnie des Vins Surnaturels, in London and New York. Next on Meilichzon’s list is The Grand Hôtel Pigalle (9th), Rachel’s Cake, Léda Restaurant (13th) and next year, the Hôtel Bachaumont (2nd).

He’s everywhere at once, making it hard to keep up with the workaholic that is Philippe Starck, who is French but hardly ever in his home country. The designer’s work can be seen all over the world and his long list of interior design projects stretching back to the 1980s includes the sassy Mama Shelter hotels across France and overseas plus such Parisian heavyweights as the refined Dorchester Collection’s Le Meurice and the dashingly laid-back Le Royal Monceau Raffles Paris, including its spectacular Spa My Blend by Clarins.

Starck also likes to get involved in stand-alone restaurants. Each of his projects is cosmopolitan and always boasts a healthy dose of fun, like at Miss Ko, Ma Cocotte and Bon. However, what’s most admirable about Starck is his distinctive playful signature style and an inexhaustible inspiration for creating bewitching spaces, and each of his projects proves to be an instant success.

“Be creative with simplicity,” is Sybille de Margerie’s motto and she executes it perfectly – you wouldn’t catch this designer using a monochrome palette. De Margerie is about colour, technology and efficiency but without forgetting style, art and comfort, all of which are united in the highly polished and star-studded Mandarin Oriental, and the slick but non-ostentatious Hôtel de Paris St Tropez.

The designer is part of the Taittinger family and trained with Pierre-Yves Rochon, but she has made her own mark on interior design since 1989. De Margerie knows just how to craft warmth and style out of just about any space.

De Margerie’s projects in France include the Cheval-Blanc hotel and L’Apogée in Courchevel, the Hyatt Regency Nice Palais de la Méditerranée and the Cap d’Antibes Beach Hotel. The designer has also worked on projects in the Middle East and North Africa, and is currently preparing projects in Asia, Latin America and Oceania, which she is keeping under wraps for now.

A popular trend in the international hotel industry is to commission a fashion designer to create interiors and the French haute couture master Christian Lacroix is certainly on our radar right now. Lacroix is sought after for his flair, for the flamboyant, and his talent for uniting disparate materials, colours and patterns, which is hard to rival.

Lacroix founded his maison in 1987 but only started designing interiors over 20 years later. Following on from such major Parisian hotel projects as the Hôtel du Petit Moulin, Le Bellechasse and the Notre Dame, his design for the Hôtel du Continent is even more refined, harmonious and beautiful. The latest is Hôtel Jules César in Arles, Lacroix’s birthplace, which opened this past summer.

Today design is everywhere – especially in France. And with such head-turning, dream-inducing talent, there’s never been a better time to embrace the design profession and its stars. The fact that the crowds of art de vivre connoisseurs across the world are trying to snap up more reservations than there are places, at hotels and restaurants such as those detailed here, shows that designers can bring unprecedented success to establishments. Now brands in their own rights, designers are in high demand and the sharpest ones are setting the bar very high for the next generation.

Previous Article My Life in Paris: Run to the Sun (King)
Next Article Horse-riding in Normandy