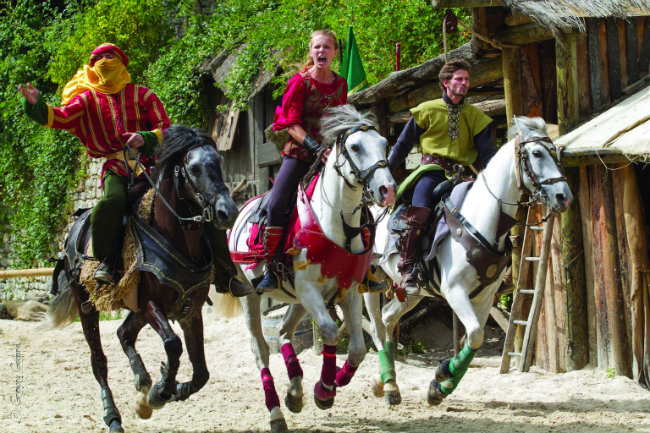 Sitting on a bench beneath the towering ramparts of Provins, I can easily imagine I’m back in the Middle Ages. Gentlemen on horseback are showing off their falconry skills to ladies in flowing gowns, their hawks skimming over our heads to land on the battlements as they did in centuries past.

The cast includes a camel with accompanying Bedouins, an amusingly stubborn donkey, and an impressive succession of birds of prey, from owls to eagles, hawks to vultures. The history of falconry unfolds before our eyes in a captivating show that is just one of many historic attractions for visitors of all ages to Provins in Seine-et-Marne, and yet many British Francophiles have never heard of this enchanting UNESCO-listed gem. 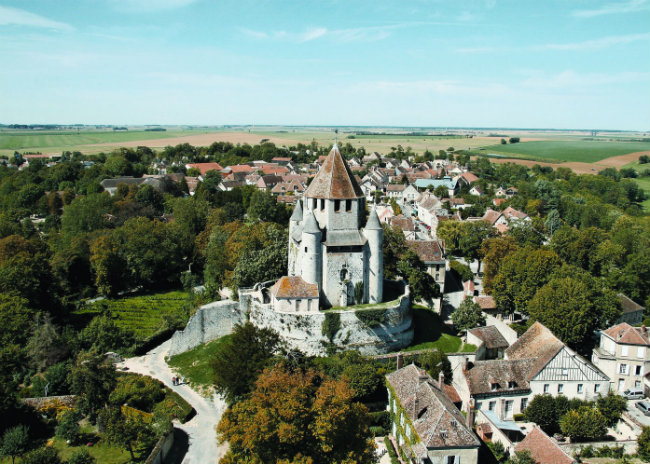 Many towns experience economic ups and downs. Raw materials run out; competition looms; shopping habits change. So it was in Provins, 80 kilometres to the southeast of Paris. Centuries later, this medieval time capsule makes a delightful stopover when driving south from the Channel ports, but it’s also easily accessible by train from Paris for city break visitors.

In the 13th century, Provins was one of three towns in the Champagne region which hosted regular trade fairs. Geographically, the region lay at a commercial crossroads, but trade was also boosted by the entrepreneurial Counts of Champagne, who established the fairs and introduced a passport that ensured safe passage across their territory for merchants. Thousands of traders converged on the region from Flanders, the Mediterranean and beyond, the fairs moving every two months from town to town. In Provins, the trading took place in spring and autumn, alternated with replica events at Troyes and Châlonsen-Champagne. 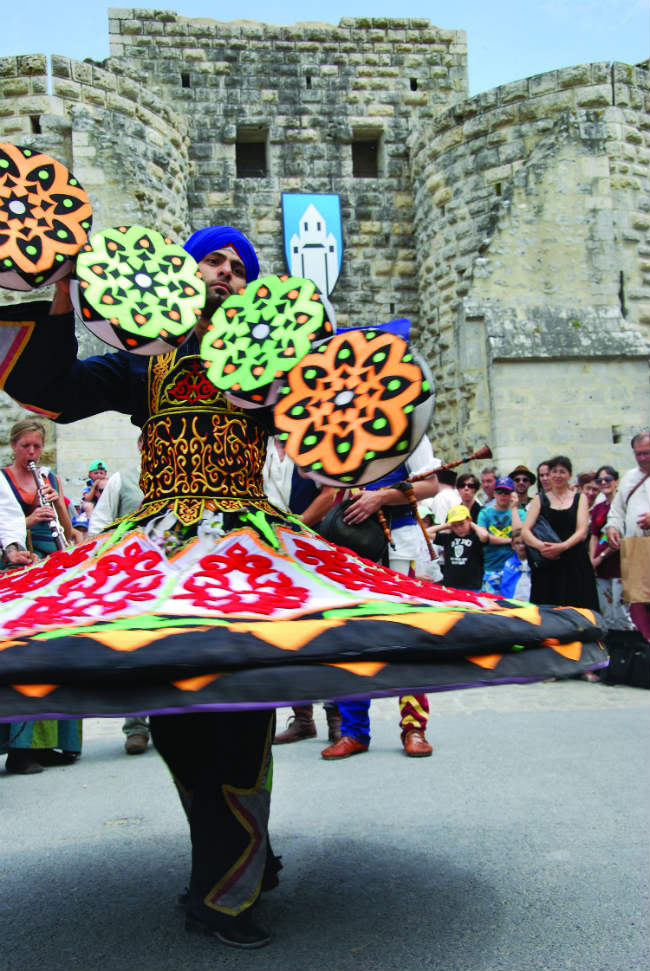 In the early 14th century, plague, war and a switch to sea transport saw the town’s prosperity wane, but instead of being rebuilt and modernised, Provins simply slumbered inside its extensive ramparts. The streets were already wide enough to accommodate the merchants’ pop-up shops, so although new houses gradually replaced some of the older properties, many medieval buildings were allowed to remain. A Sleeping Beauty of a town just waiting for a signal to wake up.

It took a while, but in the 21st century Provins began to flourish again, awarded UNESCO World Heritage status in 2001 as one of the best preserved medieval cities in France. In the 12th and 13th centuries, at the height of Champagne Fair prosperity, it had been home to some 15,000 people. But now the combined population of the Upper and Lower town is less than 13,000, though it is substantially increased by waves of seasonal visitors, especially in mid-June when Provins hosts the largest medieval festival in France. 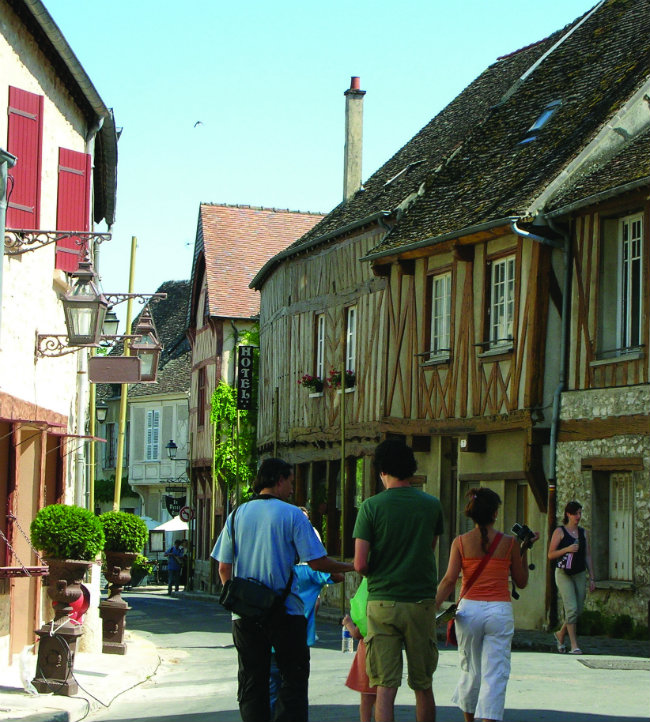 For 48 magical hours, a medieval encampment springs up around the foot of the ramparts which still enclose large parts of the town. Here you can take part in games such as shuffleboard and ninepins, see demonstrations of leather and fabric crafts, listen to musical instruments and watch acrobats and jesters.

It’s all surprisingly realistic. I still remember the ghastly ‘lepers’ who accosted me during one festival beneath the walls of César’s Tower. The atmosphere is infectious (though fortunately the disease is not) and many visitors come in medieval dress. A one-day ticket this year cost just €11 for adults; €15 covered both days and children under 12 got in free. Dress up in period costume, however, and you paid just €5 for one day, €6 for two.

If you can’t catch the festival in 2017, or simply prefer your history a bit less full on, you can still immerse yourself in the period atmosphere of this unique town. Avoid holiday times, as I did, and you can wander along quiet streets, explore the historic monuments at leisure, and enjoy the live shows without the crowds. 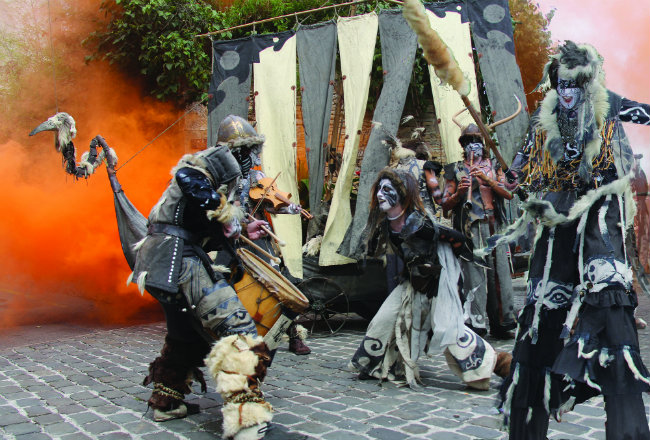 Stop off at the modern visitor centre at the main entrance to the Upper Town for leaflets in English and information on events and guided tours. The annotated map suggests three colour-coded walking routes of between 90 minutes and three and a half hours, all punctuated with information panels.

Unbroken ramparts still enclose the town on two sides and visitors coming from the main car park pass through Saint Jean’s Gate, set between two imposing towers. Head straight down Rue Saint-Jean and the first stop for most visitors is the Tithe Barn, a typical Provins house which was used as a covered market during the Champagne Fairs. Today, mannequins illustrate the activities that would have gone on here – the money-changer, the Italian and Flemish merchants, and the Provins wool merchants – whilst the vaulted cellar illustrates trades such as pottery, stone-cutting and quarrying.

There are more than 160 underground rooms in the Upper Town, some of which are open to the public. I loved browsing the shelves of Le Roy Lire, a medieval bookshop deep below Rue de Jouy and accessed down steep stone stairs worn smooth by centuries of leather-shod feet. Run by the enthusiastic bibliophile Maxime Flon, it stocks all manner of history books, including a selection in English. 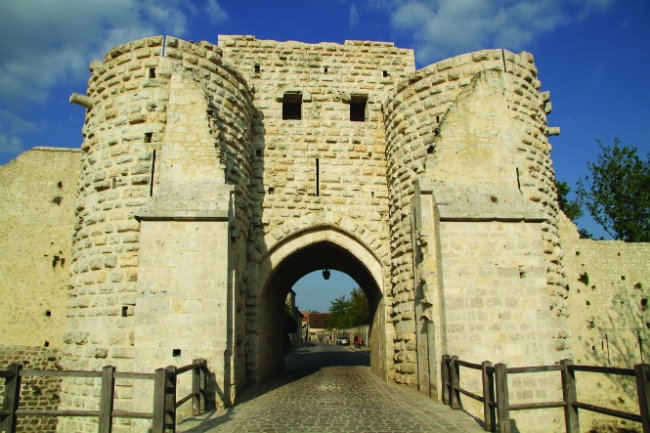 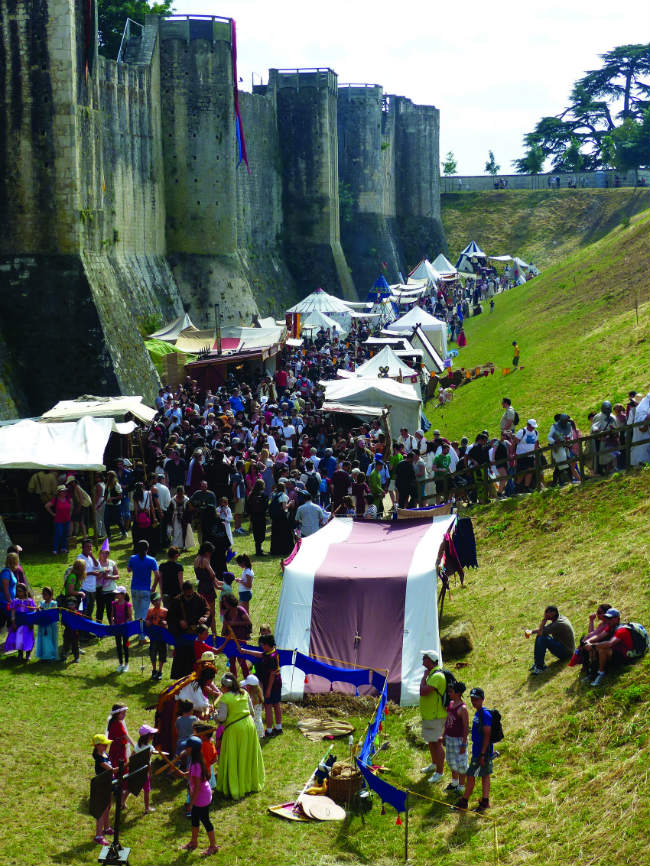 A little further down the street, on the main market square, Place du Châtel, Le Chemin de Champagne offers a tantalising selection of interior design items and garden objects in another vaulted cellar. One of those lovely occasions when the shop premises are as attractive as the merchandise. To see more underground galleries and the 12th-century hospital for the poor, ask at the Tourist Office about regular guided tours.

Head through the square, and the next high-profile building – literally – is Cesar’s Tower, which dominates the town and offers great views across the rooftops to the surrounding countryside. Beyond it, the 17th-century dome of Saint Quiriace Collegiate Church looms over the square below, as if in compensation for the substantial section of the 12th-century church that was never completed. Founded by the will of Count Henri le Libéral – the clue is clearly in the name – it remained unfinished after the French kingdom ran into financial difficulties in the reign of Philippe le Bel.

From Saint Quiriace and Place du Châtel, it’s just a short walk downhill to the Lower town, but turn off along Rue des Jacobins and, in the summer months, La Roseraie de Provins is a glorious place to relax among scented blooms and to enjoy views back up to the medieval skyline. This three-hectare garden with tea room and shop pays homage to ancient roses and, in particular, the Rose of Provins, brought back by Count Thibaut IV from the Crusades in 1240. Thibaut is reputed to have cultivated the rose on the slopes around his castle, the pinky-red flower soon becoming the emblem of the town. Legends abound and you won’t go far in Provins today without seeing a reference to its famous rose. 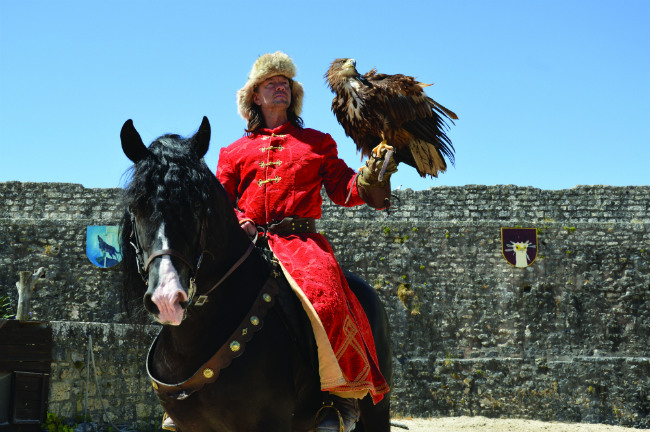 A skilled horseman and renowned poet, Thibauld of course features prominently in the live equestrian shows that delight visitors between mid-March and early November each year. There’s always something going on in Provins, but do check the website before you travel for seasonal timetables.

You might catch The Legend of the Knights, when Thibaut IV and Blanche of Castile celebrate his return from the Crusades. Expect stunt riding, dressage and cavalcades beneath the ramparts, interrupted of course by the devilish Torvark and his warriors. Or maybe watch The Age of the Ramparts, where the Lord of Provins and his knights demonstrate the weapons and techniques of medieval warfare.

I’ve seen many a bird of prey show, but was utterly absorbed by the imaginative staging and beautiful birds showcased in The Eagles of the Ramparts. An atmospheric evocation of this extraordinary town’s very colourful past. 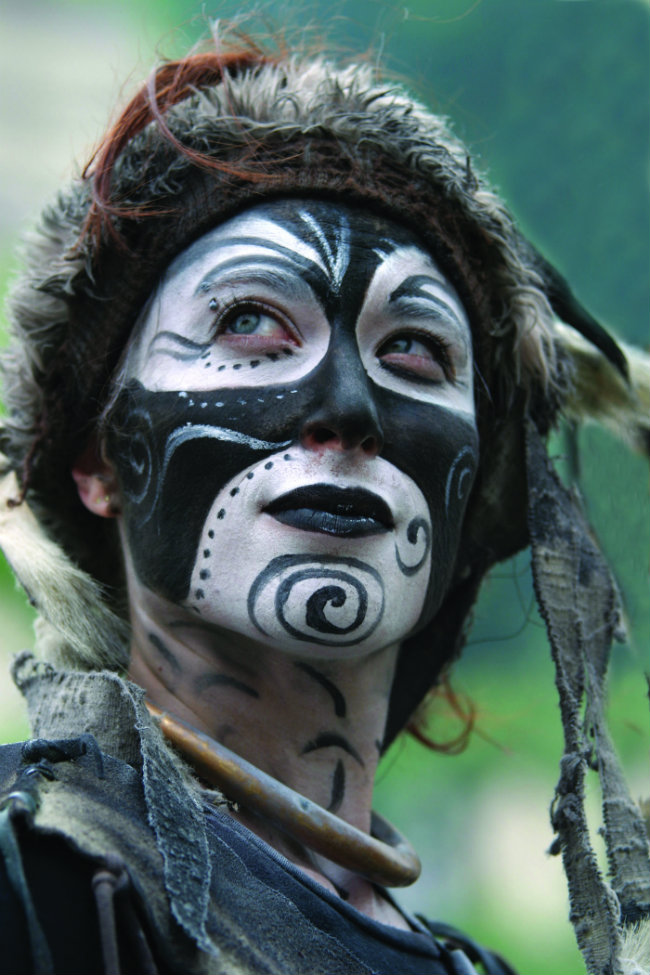 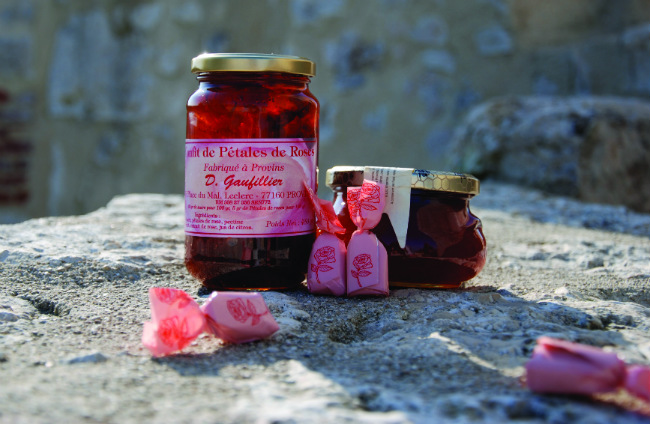 Make the most of Provins

A Provins Pass Card gives entry to the four key monuments – César’s Tower, the Underground Galleries, the Tithe Barn and the Museum – as well as discounts on the medieval shows, tourist train and rose garden. One entry to each attraction, pass valid for one year – Adults, €12; children 4-12, €8.50; or Family Pass (2+2), €35.50.

Take the weight off your feet and enjoy a guided tour including commentary with a 30-minute trip on the Tourist Train, daily May through August, weekends and public holidays outside summer season. Adults, €6.50 (€5.90 with Pass Card); children €4.50 (€4.10).

Gillian travelled by car from Folkestone to Calais with Eurotunnel. Provins is 356 km from Calais, a 4-hour journey. By train, Provins is 1h 25min from Paris Gare de l’Est. Day trips also run from Paris with ParisCityVision and include a medieval show. 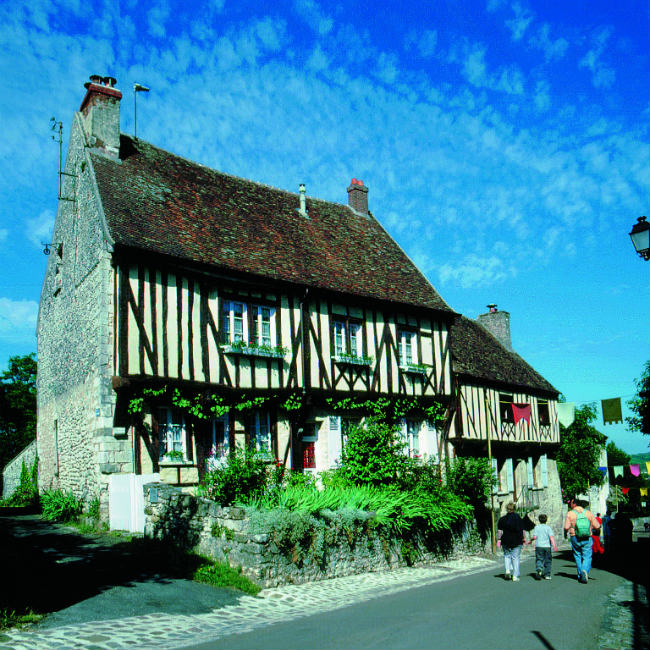 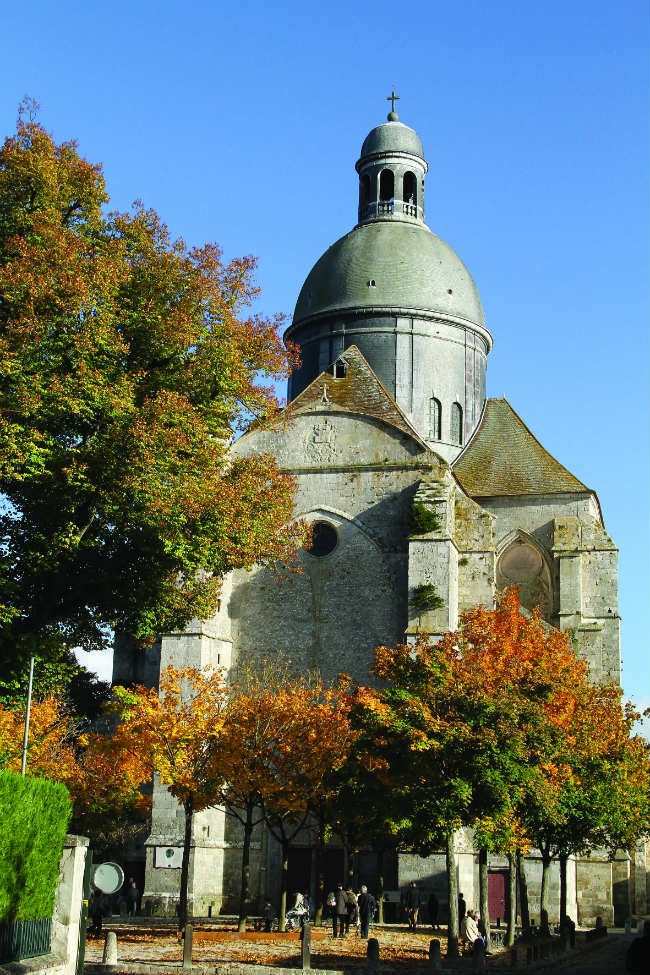