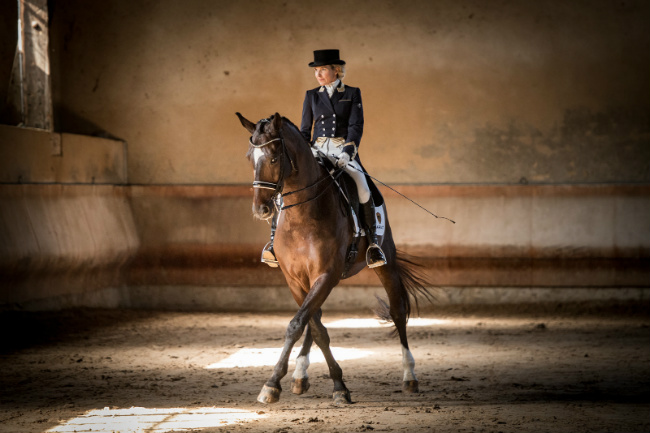 A couple of years ago I met and wrote about a most incredible woman, Verity Smith. Based in Nîmes, she is an equestrian of dual British-French citizenship who hopes to be the first blind rider in the world to win both a Paralympics and an Olympic medal.

Verity’s life story is an inspiration. It’s a tale of grace and courage, hopes and disappointments, promises and tears.

Verity was born sighted. She was a beautiful child who seemed destined to ride horses. Verity’s parents indulged her with riding lessons at the age of three. Riding competitions followed at five. At eight, Verity was diagnosed with a disease that impaired her vision. By the age of seventeen, she was 90 percent blind.

Through the years, as Verity’s world literally slipped into darkness, the shining light in her life was riding. She won every equestrian event she entered, even against able-bodied riders.

Verity’s reputation spread far and wide through Britain. In 1992 she joined the British Equestrian Paralympics Team at the World Championship at Arhuss in Denmark. She ranked top in her category. It seemed to all that a place in the 2012 Olympics in London was inevitable. Verity would make her fans and her home country proud.

Fate had other plans. Verity’s horse became ill with cancer. Verity, herself, was involved in an automobile accident. It took over a year in rehabilitation for Verity to gain back her strength and her confidence. With a new horse, Szekit (Kit), Verity got back onto the saddle. She rose quickly in the rankings again. 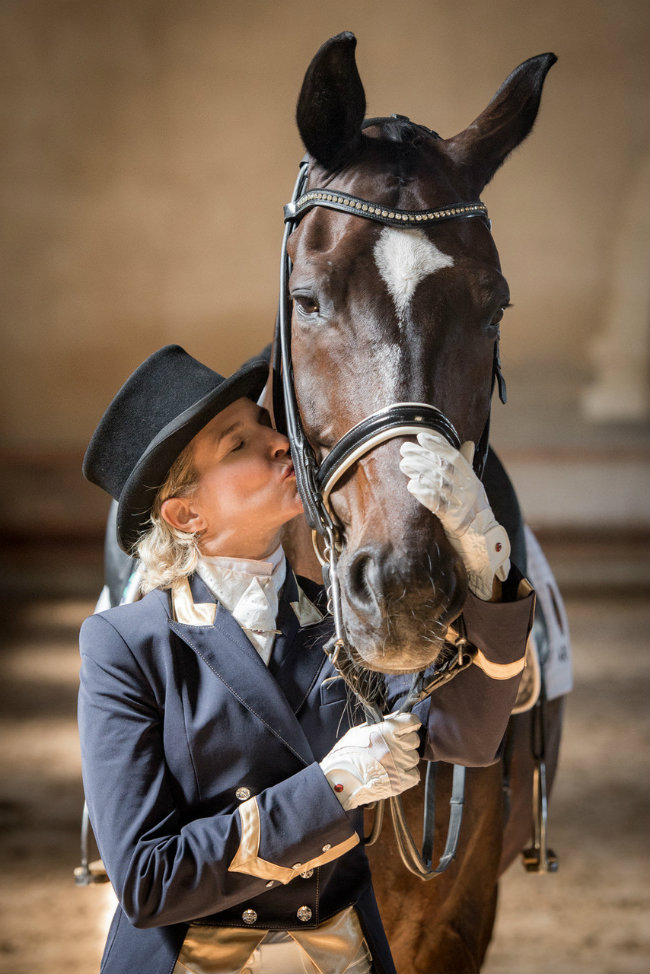 Then came the Brazil Paralympics in 2016. Another setback.

Midway through training for the Brazil games, Verity learned a rule for blind riders had been imposed by the Olympics committees. They were required to wear blindfolds to compete. The new rule meant the small amount of light that blind riders like Verity depend on for balance and equilibrium would be snuffed out. It was a dangerous proposition for them all.

Verity struck back. She took the mantle for all blind riders and challenged the Olympic committee’s ruling. It meant she would have to drop out of training to concentrate on the effort, but she did it. And won. The ruling was thrown out.

Next up is the 2020 Olympics in Tokyo. Everything seemed to be going right. Verity and Kit were winning competitions at the highest level — against sighted riders. The elegant duo ranked twelfth at Elite level. They were selected for the French para-dressage squad to compete internationally.

Misfortune came calling again. Verity had left her home in Nîmes to pick up her new companion dog in London. While away, her beloved horse Kit contracted laminitis. He was near death for months. His days of competing were over.

When I heard of Kit’s illness and knew how it would impact her lifelong dream, I reached out to Verity. She was devastated. “The wings of my Pegasus are broken, as is my heart,” said Verity. Kit was Verity’s pride and joy– her raison d’être. He made Verity feel that anything was possible.

I asked Verity, “How can you be so brave, so strong? How do you pick yourself up after so many setbacks? What is your inspiration?”

“I am a firm believer that ‘the obstacle is the way’,” Verity said. “Sometimes finding a way around obstacles shows us a different, and sometimes, a better way.”

She continued, “It’s not always easy to stay positive and believe in yourself when the going is tough, but when I started to go blind, at the age of eight, I had a little mantra that I used to say to myself when I felt afraid of the dark that would come one day.” Verity said. “I have carried these words with me into adulthood: ‘When you go into the darkness take with you what you’ve learnt, for the darkness will always be there but you can light it and watch it burn’.”

“You use the phrase ‘the ability in disability’ quite a lot. What does that phrase mean to you,” I asked.

“It means that a ‘disability’ doesn’t necessarily ‘dis-able’ a person,” Verity answered. “If you work hard and step up to whatever challenges you, there is no difference between you and every other competitor. Blindness doesn’t matter.”

Verity continued: “I remember a very simple children’s book that gave me a strong sense of belief. It’s called The Velveteen Rabbit. It’s a beautiful book about a toy rabbit who was threadbare after many years of being loved and hugged. One day,” said Verity, “the stuffed toy turned into a real rabbit. The story has always reminded me that if you wish, hope and work hard enough, magic is possible.”

“Speaking of magic,” I asked, “was influencing an Olympics committee to change a ruling one of your best moments, or were there others?”

Verity replied: “I am pleased that I could affect a change in the Paralympic blindfold rule in 2016. The ‘Beat the Blindfold’ campaign confirmed my belief in the power of the little people.”

She added, “I am super proud that in 2017 my horse Szekit (Kit) and I were ranked 12th in France at Elite level. We were competing and winning at the highest level of any blind rider in the world. Against ‘regular folk’,” she quipped.

“Kit is still in a veterinary clinic. His recovery is slow,” Verity stated. “I am bowled over, however, by his courage and determination. He is a true champion,” she said proudly. “When he returns home, he will work as an equitherapy horse with my charity Equipe Verity. He will be by my side every step of the way to the Olympics.”

“Recently you had a surprise encounter with one of your idols.”

“Yes!” Verity exclaimed. “I was lucky enough to meet Andrea Bocelli. He’s been an inspiration to me for many years. We share the same passions: horses and music, as well as the same disability,” she said. “When we met, we went to shake hands. We both missed,” she continued with a laugh, “our hands were flapping in the air!”

“My goal is to train hard,” she promised. “With perseverance and a bit of luck, I will bring home a gold medal from Tokyo for the French Para Olympics team. In Paris, 2024, I hope to become the first equestrian disabled athlete to represent her country as a member of both the paralympic and the olympic teams. ”

In order for Verity to place on the 2020 French Paralympic Dressage Team, she needs a horse that is training at a very high level. She has found such a horse: Daizy, a ten-year-old Hanoverian mare with the temperament to continue Kit’s legacy.

Verity and Daizy are training together in France. The duo can’t waste a moment to be at the top of their game. Daizy’s owner has made it possible for Verity and Daizy to get this far. To reach her Olympic dream, Verity must raise funds to purchase Daizy and to pay for the support team needed at the Games. A GoFundMe account has been set up to help provide financing for Daisy and Verity’s Olympic quest. The appeal is called ‘Verity Smith – Olympic Vision’ and can be accessed here.

Any amount you give will go a long way to help Verity continue her important advocacy for the blind. Her light shines very brightly in the lives of thousands she has touched through her example and her work.