Strasbourg, the City Which Gave France its National Anthem 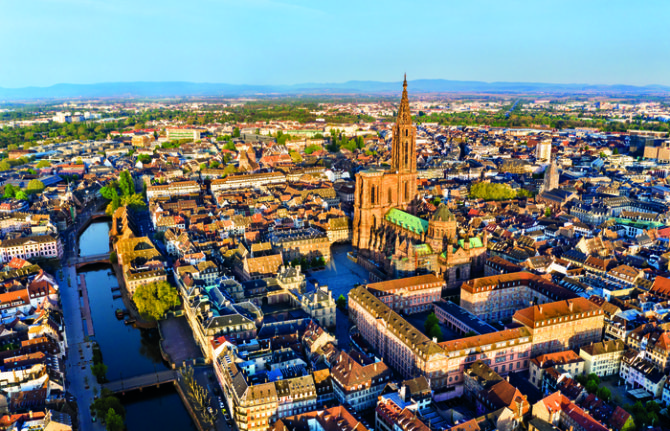 For the city which gave France its national anthem, Strasbourg has had something of a rocky ride across the centuries. Strategically positioned on the Rhine, this elegant metropolis has been batted back and forth between France and Germany no fewer than five times since the late 17th century.

Since the end of World War II, the city has been settled as French, yet this turbulent history has given Strasbourg a unique blend of architecture, traditions and lifestyle that make it a stunning choice for a city break. The language spoken here today is French but the street signs also carry the old German names; restaurants serve Alsatian cuisine which draws from the best of two nations; and both cultures have contributed to the landscape of Strasbourg in the 21st century.

Founded by the Romans, Strasbourg was part of the Germanic Holy Roman Empire from the ninth century onwards, but in the Middle Ages it was governed first by bishops and then by guilds of burghers, before France’s Louis XIV took over in 1681. Two centuries later, after the siege of 1870, the city surrendered to Germany and acted as capital of the Reichsland of Alsace-Lorraine… until French troops arrived in 1918 and ownership changed yet again.

But the upheaval for local residents wasn’t over. Barely 20 years after becoming French again, Alsace was annexed by Germany from June 1940 until November 1944 when Liberation arrived under General Leclerc. Today you will still hear people talk of elderly relatives who were born German but who died French. 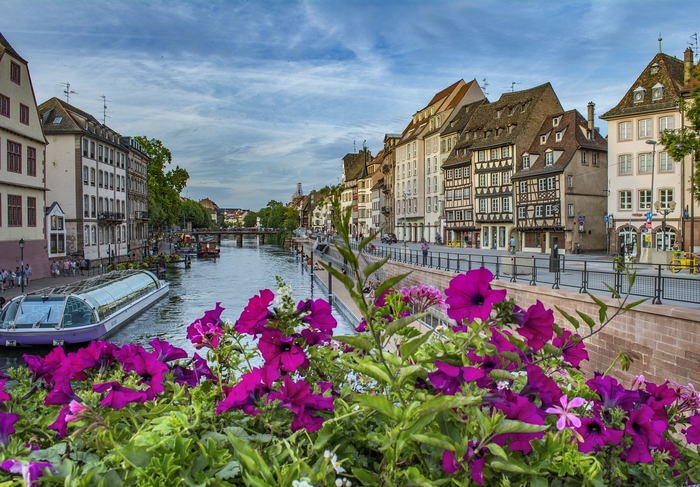 View from the River

Capital of both Alsace and the Grand Est region, Strasbourg also carries weight beyond its national boundaries. In 1949, it became home to the new Council of Europe and, 30 years later, hosted the first meeting of the European Parliament.

And of course there’s that famous anthem, known throughout the world, thanks not only to official events but also to an international passion for football and rugby.

La Marseillaise may sound like a Provençal import, but its roots are firmly in Strasbourg, written in 1792 by Claude Joseph Rouget de Lisle at the request of the mayor who wanted rousing words to rally Frenchmen to fight against Austria. Volunteers from Marseille quickly adopted this War Song for the Rhine Army as their marching song, singing it proudly on the streets of Paris. The rest is history.

So where to start in this intriguing city? The Romans built the first camp in 12BC on an island in the river Ill, some 3km west of the Rhine, and it’s here that you’ll find the towering Gothic cathedral and the all-important Tourist Office. Pick up the pictorial map to follow the self-guided walking trail through the UNESCO-listed Grande-Île, and buy a timed ticket for the iconic river cruise. 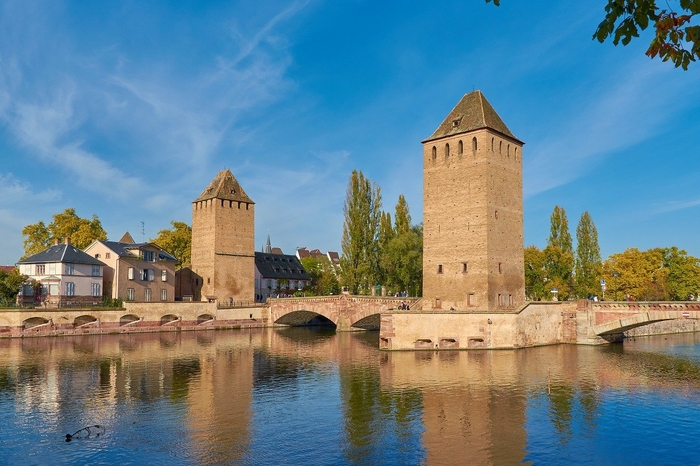 Strasbourg expanded over the centuries to reach the eastern limits of France on the left bank of the Rhine, but this must-do city cruise encircles the Grande-Île, joined to the surrounding urban area by 21 bridges. A longer itinerary also includes a detour to the eye-catching modern buildings of the European institutions.

In high summer, I sat back beneath blue skies as we pulled away from the historic quayside and passed under the first flower-fringed bridge, close to St Nicholas Church where 1952 Nobel Prize winner Albert Schweitzer was pastor. Beyond it lies La Petite France, once the district populated by millers and tanners, and now famous for its half-timbered houses dating from the 16th and 17th centuries. Don’t be surprised to see brightly coloured canoes gliding beneath the pretty pastel façades.

A City of Contrasts

Passing through a lock, our open-top boat emerged beside the Covered Bridges, a landmark of the city, but something of a surprise when you see that the covers have long gone. Built of wood in the 12th century with tiled roofs, they were replaced by stone bridges in the 19th century, but still provide a great Instagram moment with their three stone towers. Opposite, the Vauban Dam was designed under Louis XIV by renowned military architect Vauban to reinforce the obsolete medieval fortifications.

As the boat glides around the north side of the island, the architecture changes. This is the start of the Neustadt, built during German annexation from 1871 to 1918 and a showcase for the German Empire, with its wide roads, imposing administrative buildings and affluent houses. A walk around Place de la République, formerly Kaiserplatz, couldn’t offer a greatest contrast with the Petite France district. Lined with trees and surrounded by grand buildings, it could be a different city altogether. In the centre, a war memorial, erected in 1936, represents a mother with her two sons, one who died for France and one for Germany, a situation experienced by many Alsatians during both world wars.

The imperial city meets the medieval centre again at Fisherman’s Wharf where my excursion took a sharp left towards the European Quarter. Strasbourg has been the seat of the European Parliament since 1992 and its purpose-built home forms an elegant glass curve along the banks of the Ill and the Marne-Rhine canal. If you’re still fascinated by the EU after the lengthy battles surrounding Brexit, be sure to book a tour of the interior. 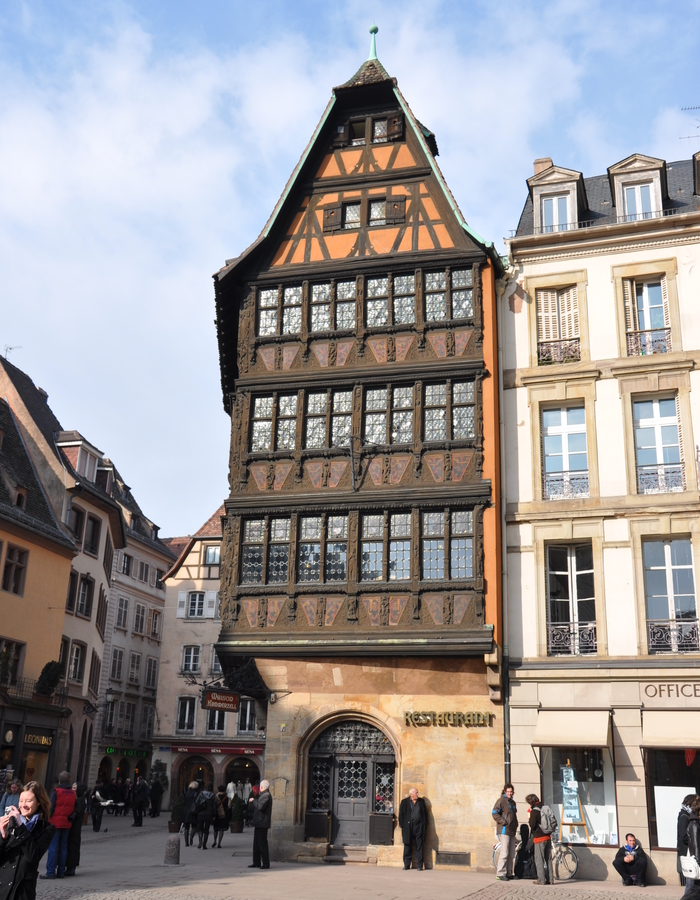 Across the water, the flags of the member nations stand outside the Palais de l’Europe, home to the Council of Europe since 1975. The first international parliamentary assembly in history, its objective is to achieve a closer union between European states. Watch out too for the Human Rights Building, designed in 1995 by Richard Rogers, architect of the Lloyds Bank building in London.

With a good overview of the city’s history and key sites, I disembarked back at Palais Rohan ready for a closer look from ground level. Follow Rue du Maroquin, with its busy restaurants, to the cathedral. Once known as Cobblers’ Street, it is one of several trade-related thoroughfares around the old Place du Marché-aux-Cochons-de-Lait. The old slaughterhouse for the doomed suckling pigs is now the city’s Historical Museum.

Victor Hugo described Strasbourg Cathedral as ‘a giant and delicate marvel’ and you’d have to agree. Take a slow walk around the outside first – illuminated every night from dusk – to soak up the medieval artistry that produced stonework like lace, then head inside where treasures include an astronomical clock with automated figures and a glorious rose window. 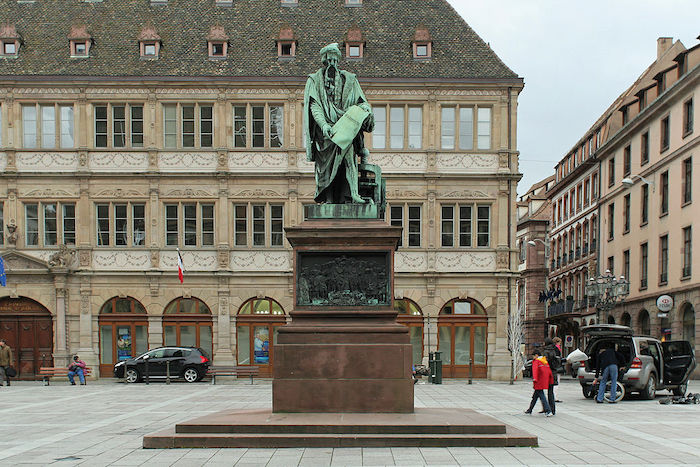 Back outside in Place de la Cathédrale, you can’t miss Maison Kammerzell, the largest and most ornate of Strasbourg’s half-timbered houses. The 75 windows have sculpted frames depicting different Biblical and mythological characters as well as musicians and signs of the Zodiac. It’d make a great image for a jigsaw! And don’t miss Gutenberg Square, a short walk down the street opposite the cathedral entrance. A statue of Johannes Gutenberg by David d’Angers was erected in 1840 to commemorate his 10-year stay in the city from 1434 when Gutenberg worked on developing a printing press with mobile letters. Behind the evocative figure stands the former Renaissance city hall, its flamboyant exterior now hiding the offices of the Chamber of Commerce and Industry.

Strasbourg has many museums, from modern art to zoology, city history to Alsatian life – even voodoo. But if time is limited, you really can’t do better than to strike out on foot and soak up the atmosphere of its eclectic architecture, tranquil parks and Botanical Garden. But be sure to stop now and then for a slice of gooey kugelhopf and coffee, or maybe sauerkraut and a glass of local wine at a traditional Winstub or Alsatian pub – the perfect fusion of France and Germany in one irresistible package. 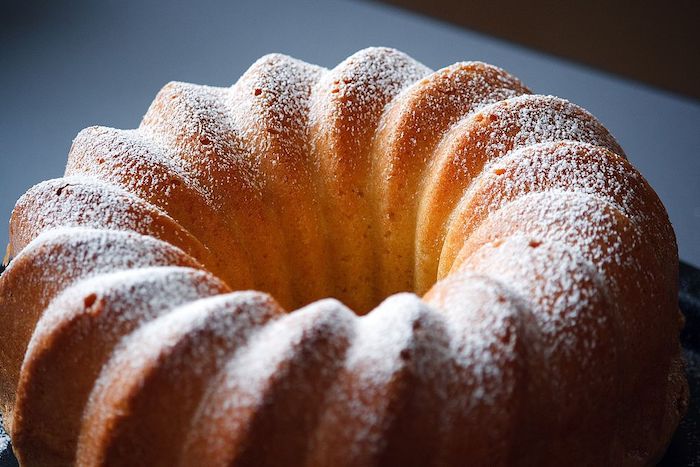 BY AIR Strasbourg airport is 10 km from the city centre and is connected by a train shuttle operating up to 4 times per hour with a journey time of 9 minutes.