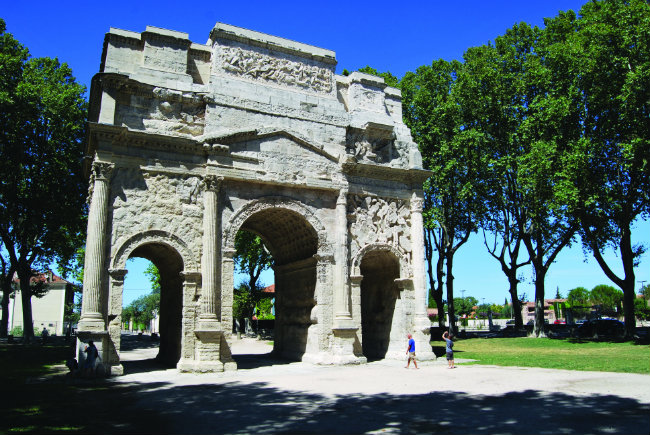 It’s a warm Provence morning in early August and the historic streets of Orange in Vaucluse are already buzzing with the promise of tonight’s major cultural offering. Television crews amble around outside the magnificent open-air Roman theatre, the Théâtre Antique d’Orange, hauling cables in preparation for the live screening of Placido Domingo’s appearance in Verdi’s La Traviata. But watching on telly is the consolation prize: the chance to see the maestro perform live in situ means the steep ranks of some 8,500 stone seats will be packed, as opera buffs here to analyse performances and set designs rub shoulders with those who, like me, are eager bucket-list tickers. This is the annual Chorégies, a world-renowned opera festival, and it is without question one of the events that any lover of France should aspire to experience.

First, after coffee and croissants on a sunny café terrace opposite the theatre’s 37-metre-high back wall, a tour of the theatre is this first-time visitor’s imperative. A super little film shown in a tiny room next to the shop sets the scene, revealing the theatre’s lively history – it was destroyed by the Visigoths, used as a military base by the Saracens in the 9th century, and even housed a village and served as a prison. In 1902 it was named after the Chorégie tax imposed on wealthy Romans keen to see productions and by 1945 it became a centre for lyrical art. The current festival format sees a few high-calibre productions packed into a month-long summer window. 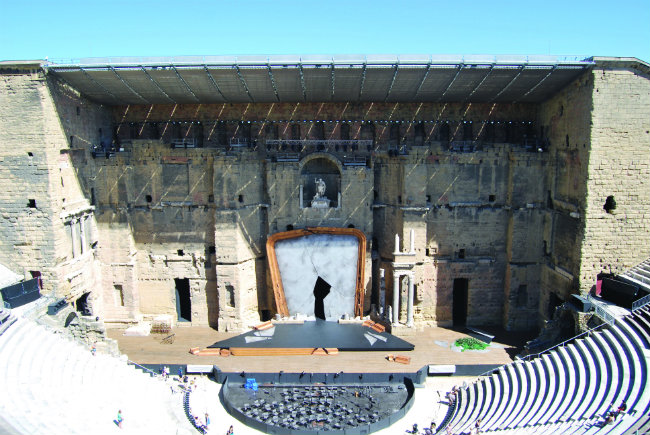 Heading past the original temple area – construction began in the 1st century AD, and here there would have been an enormous statue of a Roman god or Emperor to greet the crowds – I emerge into the eye-popping grandeur of Europe’s best-preserved Roman theatre. One hundred metres wide with a statue of Augustus in the central niche, the stage is impressive enough, but then I spin round to gaze up at the huge arced bank of seating.

It’s truly spectacular from ground level, but I’m keen to climb to the top row for maximum photo opportunities, especially after learning from my excellent guide that it was way up there, back in the day, that the pullati (society’s poorest, wearing dark-coloured clothes) would squint for a view of the stage. Social hierarchy determined seating plans back then, not ticket-purchasing power, with knights often getting the best seats. 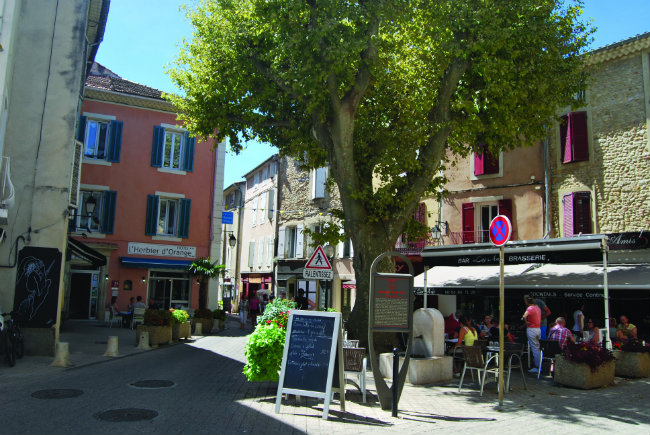 Next, after a hearty, good-value lunch on the effortlessly mignon and shaded Place Aux Herbes, which provides respite from the midday sun and a tasty poulet provençal, I enjoy a quick tour of the town, taking in Orange’s must-sees for fleeting visitors such as I. The museum opposite the theatre, housed in a splendid 17th-century hôtel particulier, is notable for the Salle des Cadastres, which houses fragments of Roman town plans on marble and impressive mosaics, while out on the edge of the city centre there’s the 19-metre-high Triumphal Arch, one of the oldest and largest of its kind, featuring an inscription dedicated to Emperor Tiberius in AD 27. I seek repose on the grass and doze off lunch in its long shadow.

Come 9pm and the expectant spectators are milling around outside the theatre, dressed to the nines on a perfect sultry evening. I head to my seat – about a third of the way up, which marks me out a somewhere between a knight and a peasant by my reckoning. The hum of last-minute chatter dies down, the sun plays its last hand and the house lights come on. Before long, the celebrated party scene in Act One of Verdi’s take on an old Dumas tale is in full swing. With a welcome light breeze picking up, I find the spectacle thrilling. Domingo makes his entrance to rapturous applause and the huge crowd remains entranced by the entr’acte and beyond. Bucket-list-wise, the experience doesn’t disappoint. 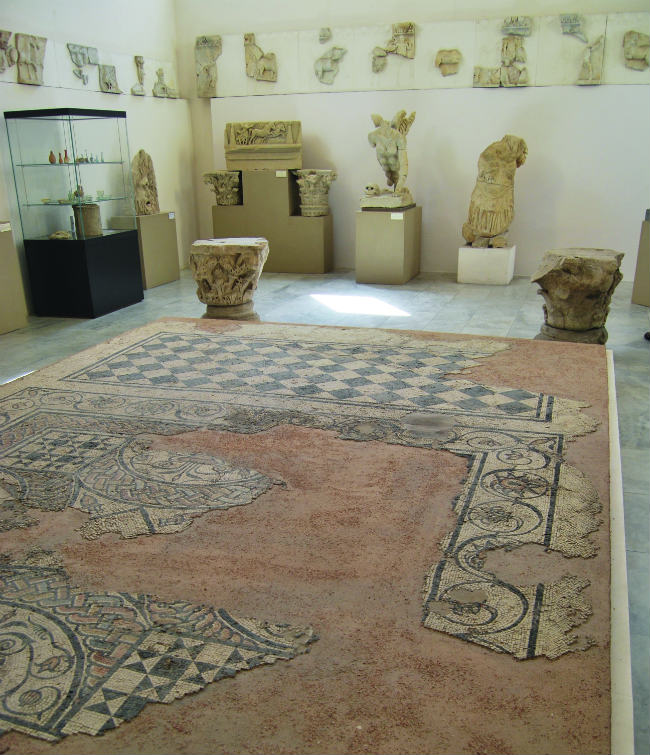 From the aural and visual to the purely visual: next day I head to Arles in Bouches-du-Rhône to enjoy another Provence gem with Roman goodies aplenty and an unmissable cultural event. Les Rencontres de la Photographie is an annual series of photography exhibitions and talks spanning the summer months at some 20 venues, both grand and bijou, across this stunning, easily walkable and historic city. While I find ample visual stimulation by simply browsing the backstreets and then taking a tour of the remarkably well preserved Roman monuments (tip: follow your guide to top of the Les Arènes amphitheatre for a view of the city and surrounding countryside) before marvelling at Saint-Trophime Church, a masterpiece of Provençal Romanesque art, I’m hoping that by timing my visit to coincide with the photo festival I will get the best of all outcomes. 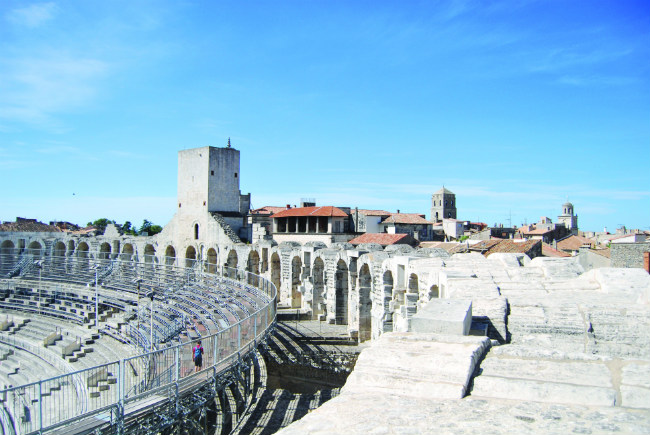 a view of Arles from the Arènes amphitheater tower. Photo: Justin Postlethwaite

First point of call for this photo fan is the festival’s HQ, the place to get passes, guides and maps – it’s slap-bang opposite the Van Gogh Foundation (see below on this one-time Arles resident) and also sells lovely art books, posters and cards. Just along from here at the Église des Frères-Prêcheurs, I enjoy a fabulous annotated retrospective of the silent Western films shot in the nearby Camargue in the early 20th century. Amid the divine setting of this 15th-century Gothic church there are also massive blow-ups of Johnny Hallyday getting his cowboy on in 1963’s ‘French western’ D’où viens-tu Johnny? as well as an insightful photographic history of how the white horses of the region and sparse landscapes doubled for Nebraska or the Sioux Falls Indian reservation on celluloid. 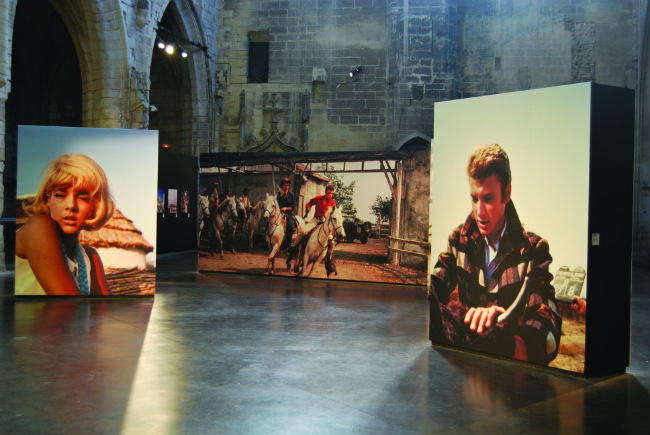 In Arles, the retrospective exhibition of the Camargue Westerns. Photo: Justin Postlethwaite

This juxtaposition of vibrant subject matter and serene location is equally heightened at the Église Saint-Anne in the gorgeous Place de la République (an obelisk stands at its heart). Don McCullin’s gritty black-and-white of post-war London is one of the festival’s main draws. Then it’s across the place to the former Archbishop’s Palace for Perfect Imperfections, featuring some lighthearted contemporary snaps that embrace the role of pure chance in this British photographer’s art. 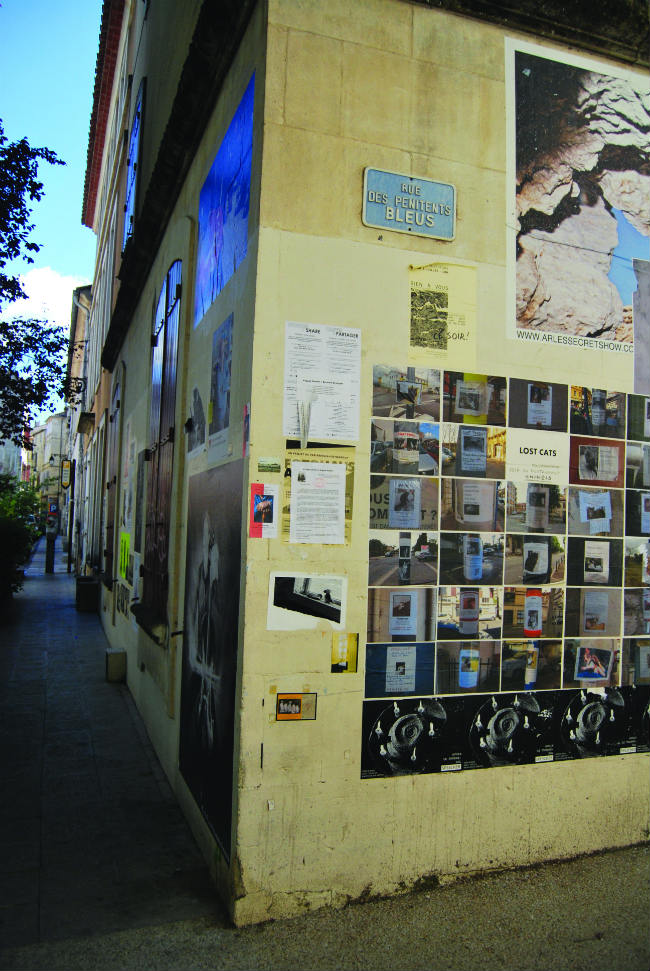 I encounter many smaller exhibitions par hasard as I criss-cross the town, pausing for a welcome pression on the lively Place du Forum (where Van Gogh painted Café Terrace at Night) and sneaking down side streets in search of an ice-cream. I arrive at one location whose raison d’être all year round is purely artistic: Musée Réattu, formerly the Grand Priory of the Order of Malta, houses some 800 pieces by the titular Jacques. There are also plenty of Picasso goodies to enjoy, plus the precious handwritten letter that Vincent addressed to the painter Paul Gauguin in 1889.

As I enjoy lunch at a little Moroccan restaurant on the Rhône quayside, invited by friends over from Aix for the day, I reflect on what a perfect host Arles is with her sublime architecture, laid-back character and friendly intimacy. Cartier-Bresson said, “A photograph is neither taken or seized by force. It offers itself up.” Arles does the same, with oodles of charm. 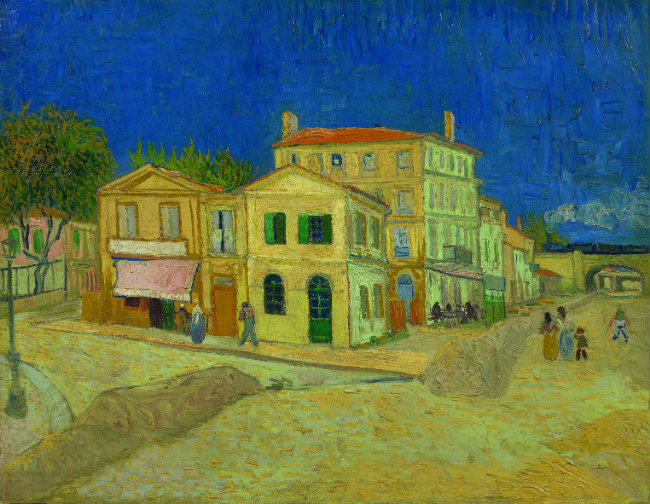 Fly to Marseille with easyJet from various UK airports. Once there, Sixt offers excellent-value car hire on a range of vehicles from its office near the front of the terminal building. You can also take the train from Paris Gare de Lyon direct to Orange in just over three hours. Arles is around half an hour from there on a connecting train.

When the Chorégies is on, hotel rooms in Orange get snapped up quickly. If you have transport, stay a little out of town at the lovely little village of Mornas. Le Manoir is an 18th-century manor house at the foot of the village’s imposing cliffs, with spacious rooms (choose from modern or traditional styles), breakfast in its courtyard, as well as an excellent restaurant, La Table du Manoir. Website: www.hotel-le-manoir.com. Peak-season rooms from €90. 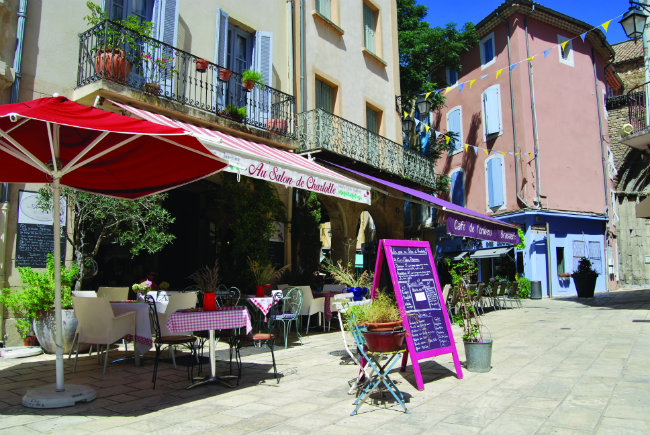 In Orange, there’s friendly service, welcome shade and great lunch formules at Les Amis. For €13.50 you can take two courses and coffee, with steak-frites usually on the menu alongside specials.

In Arles, the elegant Moroccan restaurant L’Entrevue, down by the Rhône, serves superb tagines and couscous – ideal on a hot summer’s lunchtime. Order the generous lamb with couscous from €16.50. Still in Arles, for a modern take of Provençal cuisine, head to L’Autruche (The Ostrich), a bijou and friendly, family-run restaurant. Portions are artful but the food is delicious. Depending on your opinion, their no Wi-Fi stance – ‘just eating here’ is either very welcome or a little annoying. 5 rue Dulau, 13200 Arles. Tel: +33 4 90 49 73 63

Entry to the Antique Theatre in Orange for a tour with audio guide costs €9.50 – includes entry to the Museum of Art opposite. The 2017 Chorégies programme in Orange is already confirmed – see www.choregies.fr/programme.html for details and book early. 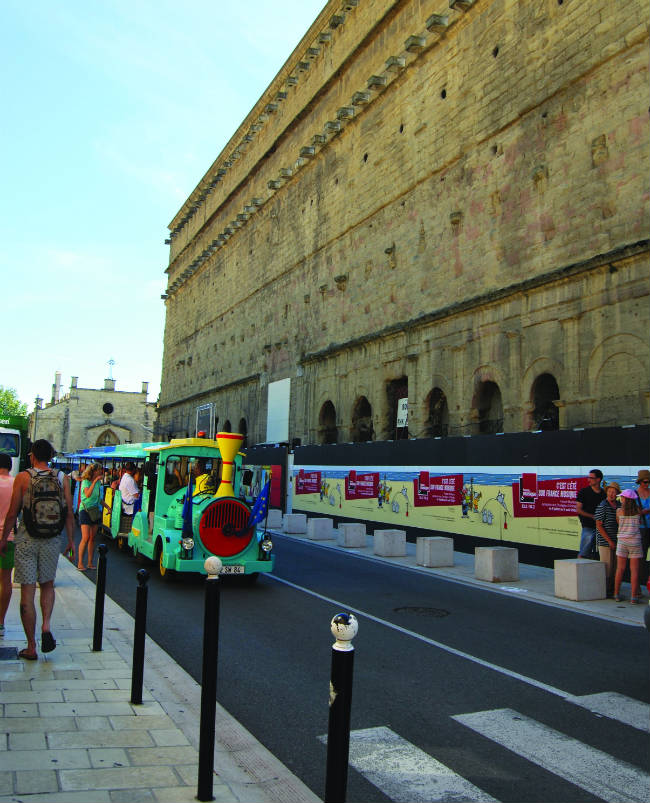 This year, Verdi’s Aida is among the operatic highlights. For details of the 2017 Rencontres d’Arles Photography Festival, keep an eye on www.rencontres-arles.com. 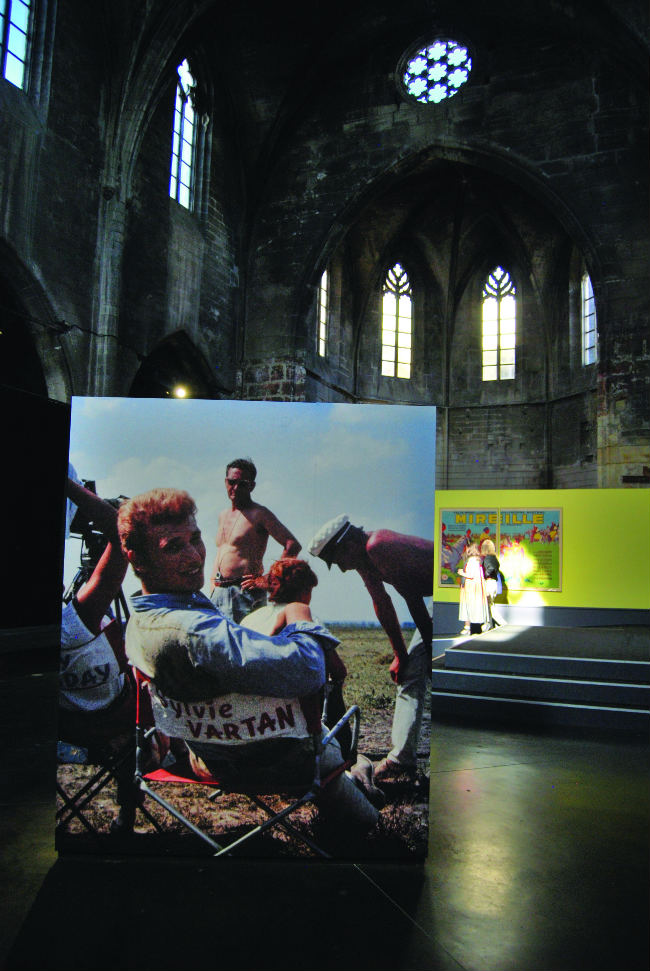 A Johnny Hallyday exhibition at church – that’s a sign of how much the ‘French Elvis’ is revered in France. Photo: Justin Postlethwaite

In February 1888, the troubled Dutch painter arrived in Arles on a quest to discover the light of the Midi, and stayed until May the following year. Alas, although it was a fertile time creatively, he endured a torrid time here – including the ear-slicing incident – and ended up at the Hôtel Dieu hospital. The Arles visitor centre runs tours that trace the painter’s footsteps from his time here, including the Langlois Bridge in the south of Arles and the famous café on Place du Forum, the site of the yellow house where he lived (which he famously painted), as well as the works he painted at the hospital. In 2014, the Vincent Van Gogh Foundation was inaugurated. In addition to many original works, it also explores the painter’s long-lasting influence on generations of artists after him via temporary shows. For more information, visit www.fondation-vincentvangogh-arles.org 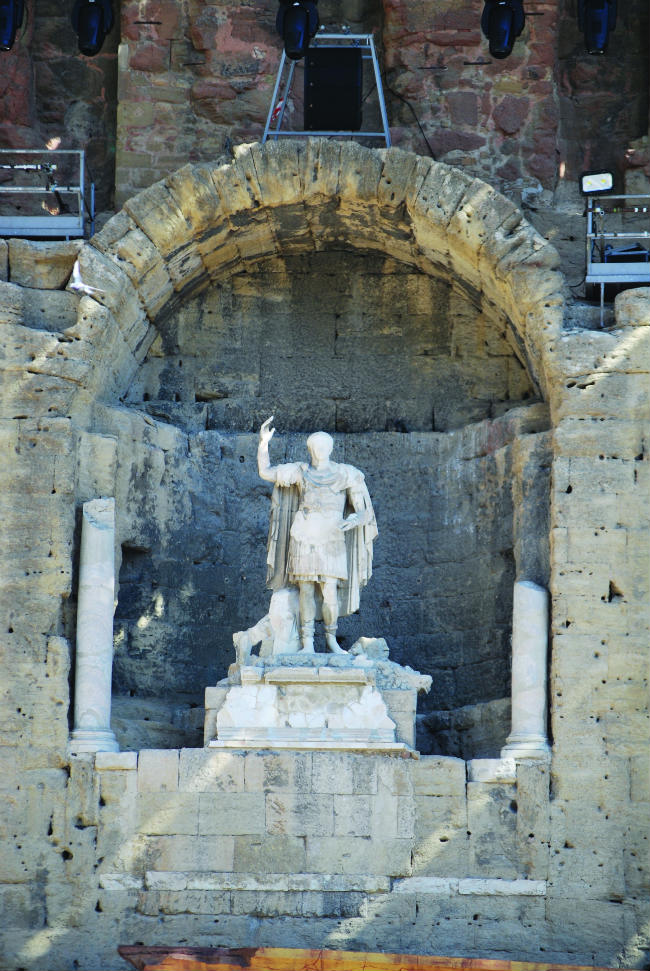 The Roman theatre in Orange was built in the 1st century AD
and now hosts an annual summer opera festival. Photo: Justin Postlethwaite