In Praise of Piment 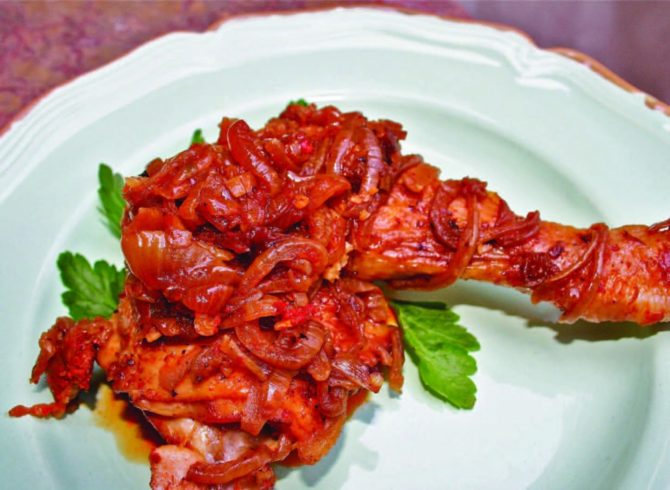 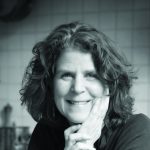 R-e-d hot! This little phrase isn’t often used to describe anything in French cuisine. But there is an exception, and it refers to a gorgeous red, elongated yet ample pepper that is raised in a particular spot of France. Called Piment d’Espelette (Capsicum annuum L Gorria) it grows in one tiny geographical area of the Basque region. The area consists of ten villages, each of which has as its focal point the cultivation of Piment d’Espelette.

The French Basque region, which borders Spain and the Atlantic Ocean, is a country apart. From its sunny climes to its robust and often lightly peppery cuisine, it has a strong and independent character that goes back as far as the sixth century, when Basque mariners set sail for far-flung lands. The Basques were noted for their ship building and seagoing ways, and many went with Christopher Columbus on his quest to find the Indies.

When the Victoria, the only ship to make it home in one piece, returned, its hold was full of spices, the sale of which paid for the voyage. Those spices included peppers, and one variety made its way to the French Basque country. It thrived in the area around the town of Espelette, where the Atlantic sends its breezes and the Nive River lends richness to the soil, which ranges from sandy to clay. The pepper, originally cultivated by women in their basse cours or farmyards, made its way into the local cuisine, either fresh, or dried and ground into a rich, almost rough powder.

The Piment d’Espelette is notoriously hardy, a result of the seeds having been selected and saved in each separate farmhouse, throughout generations. Though the Piment d’Espelette (which takes its name from the town) has a slight kick, it isn’t spicy like a cayenne or a Scotch bonnet pepper. Instead, what makes it exceptional is a rich, round pepper flavour with an afterglow; you sense it, but it hardly sears your palate, leaving instead a lush and lingering flavour.

Today, there are about 170 farmers who devote themselves to its cultivation, each of them having roughly two-and-a-half acres of land. The peppers don’t require much space – each acre accommodates between five and fifteen thousand plants. The Piment d’Espelette has an AOP (Appelation d’Origine Protégé) which is a pedigree the producers worked hard to obtain. The AOP implies many constraints – everything from the soil to the seed is inspected on a regular basis, and cultivation practices are highly standardised. The goal is to produce a perfect product each year that is as uniform as the elements will allow.

As you read this, Piment d’Espelette producers are planting their tough little pepper plants, which they have carefully grown from seed indoors. Depending on the weather, they begin planting in May, and they must be finished by 1st July. If a producer wants that AOP, they cannot plant one minute beyond that date. While the pepper requires heat to ripen, it can survive with little water, handy in this region where few drops fall during the summer. Growers aren’t allowed to irrigate, nor do they treat the plants. The only thing a farmer adds to the soil where his peppers are planted is fertiliser, usually in the form of compost. “We don’t need to use any herbicides,” says Christophe Larrodé, a young Piment d’Espelette grower who has cultivated his acre of peppers for the past five years. “We plant in plastic and if any weeds come up around the stem of the plant, we remove them by hand.” M. Larrodé fell into pepper cultivation, urged on by a friend. “I love it,” he says with a passion that belies the work involved in bringing these precious peppers to the market. “I have a day job for now, but I could happily live off my acre of peppers.” Each pepper plant looks like a decorated Christmas tree when it is in full production, with white blossoms, green immature peppers, and red peppers hanging on it at the same time. The red peppers are harvested, and traditionally they were strung into garlands, then hung under the eaves on the white façades of the Basque farmhouses, to dry in the sun. They then went into the bakers’ ovens after the bread had finished baking, to burnish in the residual heat. This last treatment enhanced their already full flavour.

Today, peppers for garlands are carefully inspected before being tied together with string, then sold fresh or sun-dried. Peppers destined to be ground are also checked, then dried in buildings designed to let natural heat and air flow through them. Once dried, they go into huge ovens, replacements for the bakers’ ovens, before being ground and bottled. Each batch of peppers a grower brings in is kept and ground separately, so what the grower sells is what he or she has produced. To further ensure the quality of the ground peppers, each batch is tested by a panel of tasters. They sniff the pepper, which is put in a wine glass, just as a wine taster would sniff wine. They hold it up to the light to check the colour, which can range just slightly from reddish orange to almost russet. Once the peppers have been judged of sufficient quality to merit the label Piment d’Espelette, they are bottled and sold. Some are turned into a sweet and spicy jelly; others are ground into a peppery paste, and still others are sold nature, on a string.

The cuisine of the Basque country is like the country itself, vivid, rustic, and full of personality. I remember staying in a small, country hotel in the middle of Basque sheep and pepper country. I’d stopped in the bar below my room for a drink, and in came a group of farmers to quench their thirst before heading home. It wasn’t long before they’d all burst into a traditional Basque song, filling the room with its lively tune. The Piment d’Espelette reflects this joyous character, with its fiery colour, and the flavour it lends to every dish it touches.

3. When you are ready to cook the chicken, heat the oil in a large, heavy ovenproof skillet over medium-high heat. Brown the chicken on both sides, seasoning it with salt, for 8 to 10 minutes total. Remove the chicken from the skillet and set it aside. Reduce the heat to medium. Add the onions and the garlic to the skillet. Cook, stirring frequently, until they are golden and softened but not completely cooked through, about 8 minutes. Season with salt and a sprinkling of Piment d’Espelette.

5. Just before the chicken is cooked, mince the parsley. Remove the chicken from the oven. Transfer it to a serving platter and sprinkle it with the parsley. Put the pan over medium-high heat. Pour ½ cup water into the skillet and stir, scraping up any caramelised juices from the pan. Reduce the liquid by half, then pour it over the chicken, and serve.

Susan Herrmann Loomis is an internationally-recognized expert on food and an award-winning journalist/author. She has written nine books both food and literary, the most recent of which is "Nuts in the Kitchen" (Harper Collins). She lives year-round in the lovingly-restored convent in the center of Louviers and across the street from the Gothic Church of Notre-Dame de Louviers. Her cooking classes On Rue Tatin are quite popular.