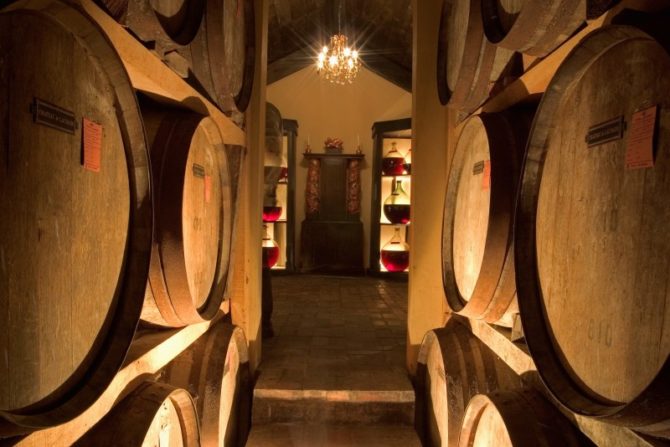 Despite a diet that should fur up their arteries faster than you can say camembert, the French have healthier hearts than most. Nowhere is this paradox more evident than in Gascony, where hearty Gascons consume prodigious quantities of foie gras while topping France’s longevity charts—in some measure thanks to local red wines brimming with fat—fighting polyphenols. But there’s another paradox at work in this ancient southwest region and it is this: How is it that the Gascons, who reputedly combine the impulsiveness of the Three Musketeers with the swagger of Cyrano de Bergerac, have somehow mustered the patience and finesse needed to handcraft liquid gold armagnac?

The answer isn’t clear, but let us rejoice nonetheless. And while we’re at it thank the Moors who ruled in Spain until 1492 and whose distillation skills spread across the Pyrenees into southern France. The Moors employed alcohol to make perfume, but the Gascons, grape-growers since Roman times, used the same skills to turn grape juice into aygo ardento—ardent water—later to be known as eau-de-vie. We don’t know when the first spirits were made in Gascony, but records show that armagnac stills were common in the late 15th century—some 150 years before northern rival Cognac began producing its own eponymous brandy.

Fast forward to the 21st century and cognac has long since overtaken armagnac as France’s premier eau-de-vie. With better waterway access to markets, cognac expanded more rapidly than land-locked armagnac. At the same time renowned cognac houses like Hennessy and Martell were able to use their marketing muscle to boost sales worldwide and dominate the French brandy business. Such is the disparity in production between the rival brandies that in any given year Cognac loses almost as much to evaporation—the so-called “angels’ share”—as Armagnac actually produces. Small wonder that some regard armagnac as cognac’s poor cousin—a sort of second-division brandy.

How wrong they are. Feisty armagnac may be small but it punches way above its weight. It is to cognac what single malt whiskies are to the big Scotch brands like Johnny Walker. Like single malts, armagnacs are distinctive, individualistic—even quirky. Most important of all they reflect what realtors call location and the French call terroir—the complex interaction of soil, climate, topography and other factors that make each grape-producing region—indeed often each single vineyard—unique. The grapes that make armagnac are almost identical to those used for cognac—mainly ugni blanc, folle blanche and colombard—but what happens to them after they are crushed and fermented is what gives armagnac its inimitable character. Other brandies and whiskies are distilled twice before barrel aging. Most armagnacs, however, are distilled only once and the resulting, velvety-smooth spirit seems to retain and reflect more of their region’s terroir. The result is a more flavorful brandy of infinite complexity and charm.

Cognaçais reply that their double-distillation results in a brandy of greater finesse, while armagnac remains rustique. Whether that’s true or not, most cognac ends up in blends produced by big cognac houses aiming for a globally recognizable house style that’s consistent from year to year. Armagnac, conversely, remains largely in the hands of small-scale producers scattered throughout the rolling Gascon countryside extending from the département of the Gers into the Landes. There are some big commercial blends, but the best armagnacs come from a single château or domain and are often bottled as a vintage, with one year differing—sometimes markedly—from the next. And armagnac remains largely a family affair—a vital, integral part of a rural economy that has changed little down the centuries. Those barrels aging gently in Armagnac’s cellars represent a store of wealth (local brides typically brought a dowry of armagnac to a marriage) and an insurance policy against hard times.

Who makes the best armagnac? It’s a question guaranteed to awaken the fighting spirit in every Gascon breast. Like Caesar’s Gaul, the region is divided into three parts—Haut Armagnac to the east and south, Bas Armagnac (accounting for 57 percent of vineyards) in the west and Ténarèze in between. Each naturally believes it is home to the superior stuff, although these days Haut Armagnac actually produces very little. What’s not in dispute is that local residents keep the very best for themselves: some 40 percent of all armagnac never leaves the region, and a good deal of what stays never goes to market. So if you really want to get to know armagnac a visit to the Gascon countryside is essential. Plenty of producers now have dedicated tasting rooms, but even those who don’t will gladly treat visitors to a drop of the family favorite. Whether they’ll let you buy any is another matter.

One thing on which all concerned agree is that there can be no short cuts in the labor of love that produces armagnac. Some modern techniques have been introduced in recent years, but by and large armagnac is made in the old fashioned artisanal way. Although the larger châteaux have their own stills, but many small producers continue to rely on traveling alambics that make the rounds after the grapes have been converted into wine. These ambulatory stills, unique to armagnac, are busy between November and January, converting wine into spirit in a single continuous process.

Once the barrels are filled and sealed, the waiting game begins. How long it lasts is defined by law and custom. The law says you can sell armagnac after two years in the barrel. But armagnac is a slow-maturing spirit and local wisdom holds that it doesn’t begin to hit its stride until 20 years or more in the cask. It’s not unusual to find 50-year-old barrels of armagnac ageing in cellars festooned with the black fungus that feeds on the alcohol evaporating from the traditional 400-liter barrels. And not just any old barrels. Although oak from other regions can legally be used, purists insist on barrels made from the black oak of the local Monlezun forest or the Armagnac Noir forests in the Landes. Preferably the staves should be hewn from trees that are at least a hundred years old; the oak is then seasoned for as long as 15 years before it’s deemed ready to host the new-run armagnac.

Traveling through the Gers it’s comforting to think of all those black oak beauties with their amber nectar slumbering in cellars beneath you. It’s also reassuring to learn that armagnac has its own part to play in the French paradox. Lauded in the Middle Ages for its therapeutic properties (some 40 “virtues” were identified by one doctor-turned-cardinal in the 14th century), more recently armagnac has been credited by researchers at the University of Bordeaux with anti-oxidant powers similar to those of red wine. And the news gets better. The same researchers have since discovered that rats fed on a high-fat diet and armagnac did not gain weight, unlike rats fed the same food and a substitute alcohol. So don’t be afraid to order those second helpings of foie gras and confit de canard when next you visit Gascony, as long as you round off the meal with an armagnac.

Chris Redman, former editor-in-chief of Time Europe, is a freelance writer who spends much of the year at his home in Gascony, where he is writing a book on armagnac.

Last year an anonymous Russian paid a record $24,000 at auction in Moscow for a bottle of limited release Domaine de Joÿ armagnac. Fortunately much good armagnac can be had for a lot less, and with more than 300 producers there’s a wide choice. Bottles marked VSOP or Reserve are five years old or more. XO has been aged a minimum of six years while Hors d’Age must be at least ten years old. Armagnacs produced from a single harvest often carry a vintage year, but don’t assume that a 1950 vintage is necessarily 58 years old. Since spirits do not mature in the bottle, what’s important is barrel age: a 1950 armagnac bottled in 1960 is officially 10 years old. Part of the fun is discovering your own favorite, but here are some we like:

Château de Fourcès 05.62.29.49.53. A Renaissance château on the edge of the beautiful historic village of Fourcès. Solid restaurant.

Originally published in the June 2008 issue of France Today.