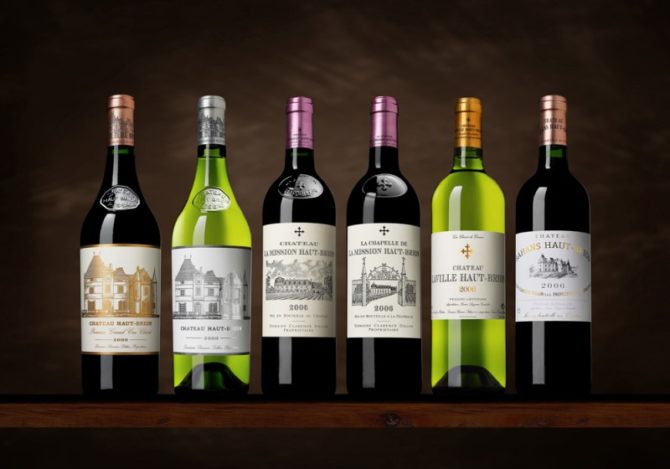 Château Haut-Brion—it’s a name that sets worldwide connoisseurs of great wine to dreaming. Located in the Pessac Léognan appellation of the Graves area, it’s one of the oldest domains in Bordeaux. In the famous 1855 classification of great Bordeaux wines, it is the only premier grand cru in Graves, and in fact the only wine outside of the Médoc area, to be included in the classification at all. All of which means that Château Haut-Brion is one of the best-known, and best-selling, of all French wines.

For the past 75 years, Haut-Brion has belonged to a distinguished American family, the Dillons. Clarence Dillon, a Harvard-educated banker originally from San Antonio, Texas, bought the estate in 1935, at a time when owning a château in the Gironde was neither a sign of wealth nor a particularly profitable investment. Dillon, whose mother was of French origin, was enamored of France; he prolonged his 1908 French honeymoon into a two-year stay, and in 1929 took a Paris apartment where he lived for part of every year. He bought Château Haut-Brion, he said, because it was his favorite wine.

The climate and the low, gravel-covered hills of the Bordeaux region make it ideal for vineyards, and winemaking dates back to the Romans. With such a lengthy time frame, it’s usually impossible to determine the exact moment when a good wine becomes a great wine. But in the case of Haut-Brion, it’s clear: it was at the time of Jean de Pontac, a 16th-century gentleman who worked ceaselessly to improve the quality and yield of his vines. (He also built the château, married three times, had 15 children, and died at the age of 101.) A century later, Arnaud III de Pontac (1599-1681), well ahead of his time, began to apply some techniques that are still in use today—including ouillage (topping up the aging barrels to avoid oxidation) and soutirage (drawing off of accumulating sediment)—that allowed the wine to age well. He was also the first to seriously export the family wines to England, and in 1663 British diarist Samuel Pepys mentions stopping at a London tavern and tasting “a sort of French wine called Ho Bryen that hath a good and most peculiar taste…”.

Later, Thomas Jefferson, then American minister to France and a man well known for his good taste and his knowledge of French wines, singled out Château Haut-Brion as a particular favorite. After the French Revolution, Talleyrand, Napoleon’s foreign minister, owned the vineyard from 1801 to 1804, and served the wines at his sumptuous receptions to accompany the meals of his famous chef, Carême. Starting in the mid-19th century, much of the wine was exported to the US, and in bottles, an unusual practice for that time. (Renowned critic and winemaker Alexis Lichine, in his Guide to the Wines and Vineyards of France, notes that Jefferson always ordered his wine shipped in bottles rather than casks, well aware that barrels risked a bit of adulteration en route.)

From 1836 to 1923, Haut-Brion was owned by the Larrieu family, and then briefly held by an eccentric winemaker named André Gibert. In 1935, Clarence Dillon learned that the domaine was for sale. Francophile and also Francophone, thanks to his mother who spoke perfect French, he was a connoisseur of fine wines, particularly those of Haut-Brion. He couldn’t pass up the opportunity to buy the château. The Depression was severe, and the wine industry had not been spared—Gibert was nearly bankrupt when he sold the estate, which was in a deplorable state.

Dillon undertook a vast program of renovation, and entrusted the running of the domaine to Georges Delmas, who had been manager since 1923. George’s son Jean took over from him, and today it’s his grandson, Jean-Philippe Delmas, who carries on—a family attachment to Haut-Brion even longer than the Dillon’s. Clarence Dillon never lived in the château, although he visited regularly with his family, and he delegated his nephew Seymour Weller to oversee the modernization of the domaine.

At the beginning of World War II, the château was used as a military hospital before being requisitioned by the Luftwaffe as an officers’ billet. The wife of Georges Delmas, who still cultivated a kitchen garden on the grounds so that her little boy could have fresh produce, complained to the commandant that his men were eating the fruit and vegetables meant for her son. The commandant promised that the pilfering would stop, but it didn’t. A woman of strong character, she returned to the château and complained again, questioning the commandant’s authority. The officer, a proud gentleman, was cut to the quick, and immediately posted a guard around the garden. The story is retold with relish by the family, as is another important wartime anecdote: the entrance to the wine cellar had been so well hidden under a heap of refuse that the occupiers never found it.

After the war, in 1953, Clarence’s son Douglas was appointed US Ambassador to France. When Douglas became Under Secretary of State for Economic Affairs in the Eisenhower government in 1957—and later Secretary of the Treasury for John F. Kennedy—his daughter Joan decided to remain in France rather than return to the US with her family.

Very attached to the Haut-Brion property, Joan turned part of the park into a formal French garden and redesigned the château’s interior to make it into more livable and more beautiful, while continuing to implement technical improvements in the vineyard. In 1967, Joan married His Royal Highness Prince Charles of Luxembourg, a member of the Bourbon family, but that didn’t end her involvement with the winery, and she succeeded her cousin Seymour Weller as its president in 1975. (Widowed in 1977, she later married Philippe de Noailles, Duc de Mouchy.)

Today it’s her son, Prince Robert of Luxembourg, who is President and CEO, a full-time job for him. He remembers his great-grandfather, Clarence Dillon, who died at 96, as a man of great charm, every inch a patrician, but also warm and sympathique. In terms of French history, he’s a prince of the blood, and a descendant of Henri IV, but his British accent reveals his elite education in Sussex, and he speaks with ease about his American ancestors and the vagaries of fate that led his mother to marry a Bourbon.

He himself is a blend of two cultures, and a prince with modern ideas. In 2005 he founded a new trading company that handles international distribution for some forty other wineries. Knowing that wine lovers don’t drink great bottles all the time, he also introduced the Bordeaux brand wine Clarendelle as a high quality, lower-cost option selling for about €15 a bottle.

In 1983, the Dillon family bought La Mission Haut-Brion, another famous wine estate right across the road and a formidable former competitor. Launching a large-scale renovation project at La Mission, they started with the technical side—a modern vat room in 1987. Then they restored the château’s living quarters, the chapel and the cellars. Finally, in homage to the Lazarist priests who occupied the domaine in the 18th century, they added a cloister adjoining the wine storage area, a link to the past and a reminder of the “Mission” of the domaine’s name.

The domaines are not very large—111 acres for Haut-Brion, 64 acres for La Mission. The varietals are the region’s classics: merlot, cabernet sauvignon, cabernet franc and, to a lesser extent, petit verdot for the reds and sémillon sauvignon for the whites. With its worldwide fame and many clients to satisfy, the top wines are never discounted and there’s a complex system of allocation.

Aspiring buyers are facing even more restricted supply because production has decreased. Delmas started thinning out the vines on the newer sections of the vineyard in 1988, and the thinning has been carried out even more aggressively since 2004. Add to that a decade that’s been warmer and drier than usual, and it’s not surprising that the yield is significantly smaller that it used to be.

To the question of what percentage of each year’s harvest is kept at the château, the answer is never enough-there are gaps in their stocks because years ago no one thought about creating a vinothèque with examples of every vintage. Sometimes the château buys missing years from individuals or at wine auctions; occasionally a wine lover will present a rare bottle as a gift—the last such acquisition was a 1926 offered by a fan from Florida.

Asked which vintage he prefers, Jean-Philippe Delmas quips that it’s the latest—a good answer in this case, since it looks like 2009 is going to be a wine for the anthologies. As for Prince Robert, he recalls the 1959 uncorked at a recent retirement celebration. Of course, on that same occasion they also opened two whites, one from 1989 and an “incredibly young” one from 1924, as well as a 1961 red. Both agreed that, however magnificent the wine, what counts most is the company in which you drink it.