Loire Valley Wines: The Rise of the Cabernet Franc Grape 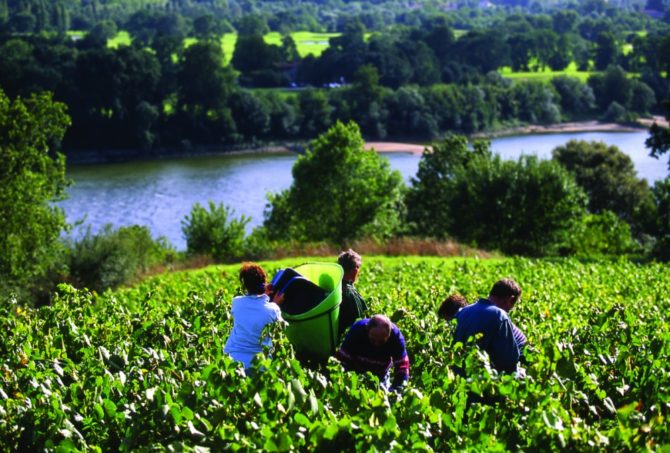 The Loire Valley may be known for its sleepy, enchanted castles, carved from the local tuffeau limestone – author Charles Perrault was inspired to write his fairytale classic Sleeping Beauty by the Château d’Ussé – but there is nothing dozy about the region’s wine producers. It is an exciting time in the Loire Valley. Not content to rest on their laurels, its producers are leading the way in biodiversity, holding fast to traditional manual elaboration methods and re-positioning their varietals.

The Cabernet Franc black grape variety is a perfect case in point. Although the Valley is best known for its white wines, from the smoky, flinty Pouilly-Fumé to the floral, crisp Sancerre (both made with Sauvignon Blanc grapes), it is Cabernet Franc which is poised to take this region into the future. Although there are several authorised red grape varieties in the Loire, Cabernet Franc is the quiet, unassuming personality behind the great appellations of Chinon, Saumur-Champigny and Saint-Nicolas-de-Bourgueil.

Cabernet Franc – or ‘the Breton’, as it’s known in the Loire Valley – is a 2ième époque variety so it matures after Merlot and before Cabernet Sauvignon grapes. That’s why it’s always been perfect for the Valley’s cooler, maritime-influenced climate, where Cabernet Sauvignon struggles to ripen – although that’s changing.

The Breton came to the Loire Valley from the south-west of France and is an ingredient in the Bordeaux recipe – usually no more than 25 per cent, except in St Emilion, where some châteaux, including the iconic Château Cheval Blanc, use a majority of Cabernet Franc. In the cooler Loire Valley, Cabernet Franc has always produced lighter reds with less ageing capacity and has relied on the occasional ‘hot’ vintage to  achieve perfect ripeness and longevity. Cabernet Franc is perfectly at home in the area’s argilo-calcaire (clay and limestone) soil, with its magic dose of tuffeau. This layer of marine sedimentary rock is comprised of compressed sediment from the valley floor which, 90 million years ago, was under the sea. This nutrient-rich soil absorbs the winter rains, stores them and then imparts them back to the vines during dry periods – it’s a perfect ‘regulator’.

Soil variations produce different results from Cabernet Franc – a combination of looser debris, sands and gravel creates finer wines, while those which are more clay-ridden and tightly-packed with debris result in more tannic examples, boasting stronger structures and ageing ability.

With harvests getting warmer, Cabernet Franc is taking on new dimensions and a richer expression. This is especially true in Chinon, where the variety used only produced wines which matured quickly and didn’t age very long – happily, this certainly isn’t the case anymore.

In Saumur-Champigny, the warmest appellation, where Cabernet Sauvignon and Aunis are also authorised varieties, there’s talk of resurrecting Cabernet Franc. With the increasing heat, the warmer villages of Varrains, Chacé, Dampierre, Souzay and Saumer are making way for those once deemed on the cool side. For example, Turquant, Parnay, Montsoreau and Saint-Cyr, which are increasingly experiencing full maturation and harvesting earlier.

Cabernet Franc, with its inherent tannic structure, good acidity and low alcohol is the perfect grape for our changing climate. It responds beautifully to warmth without experiencing any distortion of varietal character– retaining its freshness and acidity whilst showing off its stunning fruit and personality.

The Loire Valley’s producers know this and are nudging Cabernet Franc to the forefront, dazzling oenophiles with its explosion of rich violets, supple tannins, notes of clean graphite, juicy, ripe raspberries, and spicy black pepper.

And the exciting bit is that these producers have been quietly watching the mistakes being made in other regions, where alcohol levels have been encouraged to rise to please critics, and they seem to have all decided to move in unison, in a direction which is restrained and elegant yet explosively individual and appealing.

We are going to see even greater wines from the Loire Valley, ones which will rival the classic Bordeaux. Suffice to say, this Sleeping Beauty has awakened…

There are many styles of wine being produced in the Loire. Although the predominant trend is a move towards non-interventionist techniques and the desire to preserve typicity, personality and healthy soil and grapes, there are still small pockets of those producing international, commercial wines for export. Below is a selection from the former.

This wine is issued by a stunning domaine, from vines with an average age of 85 years, planted on north-east-facing slopes (as opposed to south-facing), which keep the parcel cool and account for the powerful, yet ripe and elegant tannins which drive the wine’s fruit.

Germain is one of Saumur-Champigny’s leaders in biodiversity and his terroir-driven wines are a long way from the sweet beasts which so bore oenophiles. This wine comes from 35-to-45-year-old vines, in small yields of 35 to 40 hectolitres.

Les Fevettes is a small parcel planted in 1943 which produces a wine that expresses the true finesse and beauty of the Cabernet Franc. A pure joy.

The entire range of this domaine is well-done. Racines is a parcel that his grandfather planted. A touch alcoholic for me, this biologique wine has firm fruit and mature tannins.

All these wines can be sourced via www.wine-searcher.com or direct from their respective producers: