The New Barons of Bubbly 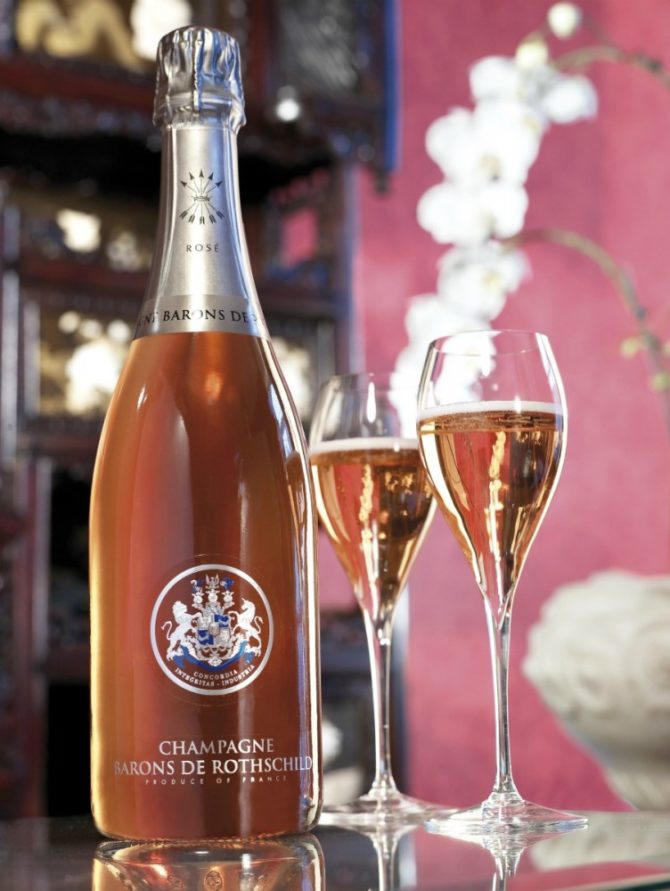 I love Champagne, but not enough to die for it, I’m thinking, as we jump out of the way of a careening mini-forklift loaded with pallets of unlabelled Champagne bottles in a vast warehouse that smells exactly like a bar at off hours. This is not a bar, however; it is the spanking new, state-of-the-art facility for Champagne Barons de Rothschild. The name sounds familiar? It isn’t.

“We started in 2005 from the ground up,” says Frédéric Mairesse, the affable Directeur Général of the Rothschild family’s newest wine endeavor. “It was literally a giant hole in the ground to house the first bottles of wine.” Then came the storerooms with dozens of computerized vats to hold the reserve wines, along with blending and racking rooms and everything else, step by step. Why a move into Champagne? Isn’t it incongruous, even heretical, for a family whose name is synonymous with great Bordeaux? Mairesse’s look pretty much says: Why not? Considering the Rothschild’s stature in the wine business, and the world’s unquenchable thirst for Champagne, it might be more logical to ask what took them so long.

The Rothschilds have been perfecting the art of Bordeaux winemaking for generations, almost since the very beginning, when Mayer Amschel Rothschild, founder of what was to become the family banking empire, sent his five sons to the commercial centers of Europe—Frankfurt, Vienna, Naples, London and Paris—to extend the family’s influence and safeguard the business. James de Rothschild, the youngest of Mayer’s sons and founder of the Paris branch, bought Château Lafite in Bordeaux’s Médoc region in 1868, and added Rothschild to the name. But the story’s wine chapter actually begins a little earlier with James’s daughter, Charlotte, and her husband (and cousin) Nathaniel—of the London Rothschilds—with their purchase of Château Brane Mouton—renamed Mouton Rothschild—also in the Médoc, in 1853. The family member to enter the wine business most recently was Baron Edmond de Rothschild, great-grandson of James, who bought and renovated two lesser-known Médoc estates, Château Clarke and Château Malmaison, in 1973.

With the new Champagne, “All three French winemaking branches of the Rothschilds are equally involved, one-third each, meaning the biggest family cocktail since 1744,” says Mairesse. Much-publicized family rifts in the past made the announcement of their joint effort in the project that much more momentous. What better way to extend the olive branch than over a bottle of bubbly? It’s a good bet, however, that unification wasn’t the driving force behind the project. If three of the most significant factors in creating a new wine are expertise, influence and money—especially in the rarified AOC region of Champagne—no one is better positioned to succeed than the Rothschilds. Wines from the family’s Bordeaux estates consistently receive top ratings and sell out years before reaching the market. In a world where the perception of quality is every bit as important as quality itself, the Rothschild mystique could well be their most valuable asset.

When a lot of three bottles of 1869 Château Lafite Rothschild from the family’s private cellars sold at a 2010 Sotheby’s rare wine auction in Hong Kong for nearly $700,000 (or $233,972 a bottle)—breaking the record for a wine sold at auction—within days there was a run on Lafite: some 600 cases of all available vintages sold at 10% to 15% price increases.

Bordeaux may be the stately queen of the wine world, but nothing says glamour, elegance and romance like Champagne. It’s no coincidence that the luxury behemoth LVMH counts six prestige Champagnes among its holdings, including the most prestigious and highest grossing labels on the market—Moët & Chandon, Dom Pérignon, Veuve Clicquot, Krug, Mercier and Ruinart. Headlines were made in early 2011 when the company announced a whopping 19% growth in wine and spirit revenues in 2010, with their prestige cuvées Dom Pérignon and Krug the top performers. Renowned Champagne houses seem to be recession-proof, with a 9% increase in sales in 2010 and an expected growth of at least 4%–5% over the next three years.

With those figures in mind, and quite a winemaking reputation to uphold, it makes sense that the Rothschilds would aim for a truly great Champagne. In the end, what matters is the quality of the wine itself. Yet while no amount of money or prestige can assure greatness in the bottle, both those elements are instrumental in production, distribution and marketing.

Champagne Barons de Rothschild is based in the tiny village of Vertus, one of 17 grand cru villages on Champagne’s famous Côte des Blancs south of Epernay, named for the chardonnay vineyards spreading as far as the eye can see. “People have been very welcoming,” says Mairesse. “They were pleased that the Rothschilds came to their village. The name brings prestige, of course, but also the promise of long-term relationships and stability.”

Champagne villages are classified according to a rating system developed in the early 20th century to ensure that growers—who vastly outnumber producers—would receive a fair price for their grapes. Villages with the best grapes earned a grand cru rating and received 100 percent of the per-kilo price; premier cru villages received between 90 and 99 percent, depending on their classification, and so on down. The prestige Champagne houses own only about 8,400 acres, a tiny fraction of the total 85,000 acres of vineyards in Champagne, and are dependent on growers, who own most of the land and may or may not make Champagne themselves.

The big houses seek out the best grapes from the grand and premier cru villages for their top Champagnes. With 340 houses (or négociants, in Champagne terms) vying for a limited quantity of top-notch grapes, relationships with growers are key and must be nurtured over years—Moët & Chandon alone needs about 2,500 acres of grapes to keep up with production. Another reason why the Rothschild influence comes in handy—growers benefit from the family’s largesse: hunting trips on the family estates, sailing in their boats, visiting their elite Bordeaux châteaux—and the Rothschilds benefit from long-term contracts.

Champagne Barons de Rothschild uses only grand cru or 99-percent-rated premier cru grapes in their assemblage, or blend. Most great wines are a blend of at least two grape varieties; in Champagne, however, blending the base wines, using chardonnay, pinot noir and pinot meunier, is raised to mathematical heights.There can be more than 50 base wines from different terroirs and different years in a single non-vintage cuvée. The assemblage is of utmost importance, as it will define a Champagne house’s distinct character and style. For the moment, Rothschild produces three non-vintage Champagnes: brut, blanc de blancs and rosé. Aging the wines significantly longer than the legally required 18 months is important to the Rothschild house style, which Mairesse describes as “feminine and elegant, with very low dosage [added sugar], and a long second fermentation at a low temperature, to create roundness with bright, fresh acidity”.  The wines are cellared for at least four years, partly due to the preponderance of chardonnay (60% in the brut, 85% in the rosé and 100% in the blanc de blancs), whose high acidity requires longer aging on its sediments to insure greater finesse. The 2006 vintage blanc de blancs, which is tasted every six months, will age seven to nine years and is scheduled for release in 2013.

Once a year, in front of the delightfully cluttered Caves Augé wine shop on Boulevard Haussmann, a crowd clusters around ten giant wine barrels, sipping, chatting and probably not spitting out nearly as much as they should. For bubbly lovers on a budget, owner Marc Sibard’s annual “Bulles d’Art” (Art Bubbles) Champagne tasting—of Dom Pérignon, Roederer, Krug and Bollinger, among others—might be the only chance to taste these rarified cuvées, since the price per bottle can run well over $300. Sibard’s commitment to bringing together world-class winemakers and the general public is one reason he is considered among Paris’s great cavistes. His outsized personality, astonishing knowledge of wine and no-nonsense demeanor don’t hurt either.

So it was Marc Sibard I called first for an expert take on the new Rothschild Champagnes. “Come on over! We’ll taste them together!”was an invitation no one could refuse. So on a warm October day, we sat outside at the wide table reserved for impromptu tastings and sampled the non-vintage Rothschild offerings.

Three elegant bottles emblazoned with the Rothschild crest—with five arrows signifying Mayer Rothschild’s five sons—were set out. Marc popped the brut: “Creamy and rich, in the style of a Bollinger, good color, nice floral notes and very low in sugar so the high acidity is prominent, as it should be,” he concluded. We both detect a slightly intense mousse, but not so much that it interferes with the lushness of the wine. The blanc de blancs was up next (called “white from whites” because it is 100% chardonnay, the only white grape used in Champagne). “An elegant and pure Côte des Blancs style,” said Marc. “Elegant acidity; a very well-structured wine.” Like the others, the rosé too is surprisingly low in sugar. A beautiful coral pink with lots of delicate berry flavors, it’s very much in the style of a Billecart-Salmon, the reigning rosé.

At about $100 a bottle for the brut and $120 for the rosé and blanc de blancs, these are wines for special occasions. Tasting of the 2006 vintage won’t be until 2013, and for the anticipated tête de cuvée—top of the line—until 2020 or beyond. Right now, it looks like they will be very much worth the wait.

Originally published in the December 2011 issue of France Today