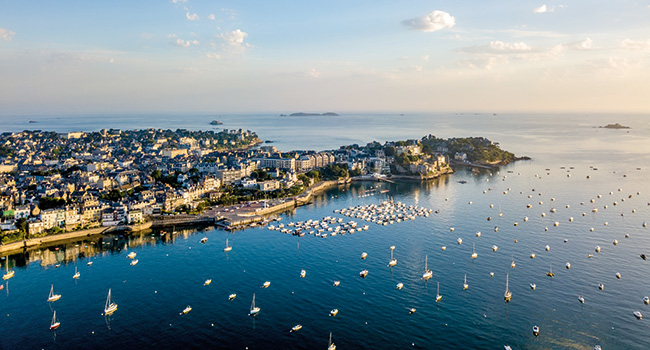 Dinard’s film festival, sumptuous hotels and gorgeous beaches have made the town one of the most prestigious seaside resorts in France. The town began its transformation in the mid-19th century with British families leading the charge. The resort has been a popular holiday destination in France since the 1860s and its appeal has continued with Dinard being named a “City of Art and History” in 2003. In this article, we discuss the top reasons to visit Dinard from spectacular coastline strolls to its British film festival.

Enjoy sunbathing on beautiful white sandy beaches or if you’re looking for something more active, there are plenty of walks on offer. The coastal walking path called “le Sentier des Douaniers” is 7.5 km long. Wander along the cliffs, passing near the famous villas and observing the astounding heritage and landscape. If you’re looking for more, head from the Prieuré beach to the pier of the Bec de la Vallée, on the Clair de Lune promenade (just over 2 km). In August, you can enjoy this walk in the evening accompanied by lovely jazz music.

The well-preserved architecture found in Dinard has been recognised with a protected architectural and urban area being created that includes over 400 villas. The Villa “Les Roches Brunes” (“The Brown Rocks”) is a must-see Dinard landmark. The stunning villa was built between 1893 and 1896 in neoclassical style and is open to the public via guided tours. It offers incredible views of the bay from its peaceful terrace. In 2014, it was included in the Additional Historical Monument Inventory (IMH).

Since 1989, Dinard has been celebrating British film with its annual festival. In 2018, 31,800 tickets were sold under the presidency of Monica Bellucci. The 33rd edition of the Dinard Festival of British Film will be held between 28 September and 2 October.

The 33rd festival dedicated to classical music at Dinard occurred in July under the direction of the pianist Claire-Marie Le Guay. The festival encompasses chamber music, jazz and piano concerts featuring the Symphonic Orchestra of Brittany as well as famous soloists and young talents.

Every year, Dinard puts on a new summer exhibition. In 2009, a selection of works from François Pinault‘s collection was shown and in 2018, Robert Doisneau‘s exhibit was a brilliant success. Until September 2022, you can enjoy the Rock Star exhibition with photos by Evelyne Coutas at Villa des Roches Brunes.

There’s nothing better than an authentic French market and Dinard’s is one of the largest in Brittany. On Tuesday, Thursday and Saturday mornings from 7.30am to 1.30pm, nearly 300 local farmers, florists and artisans sell their products.

Find out more about Dinard: