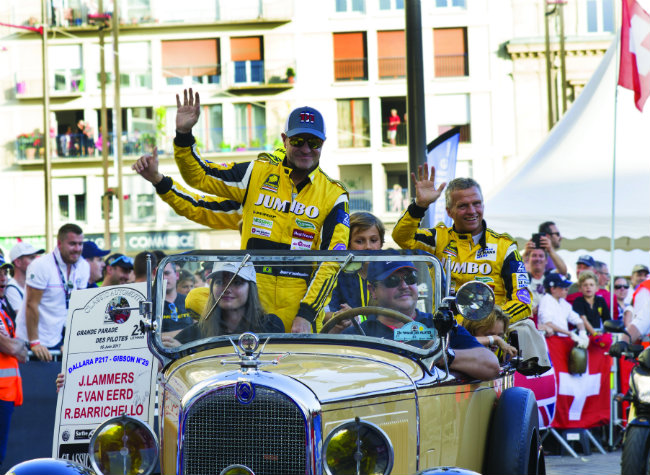 Late afternoon and my husband and I have just checked into a hotel in the tranquil Loir Valley, but so far we haven’t got further than the bar. Bags abandoned, bottles ignored, we are both studying the wall behind the line of tables, a floor-to-ceiling montage of historic photos that absorbs us both for different reasons.

Proud owner of a 50-year-old classic Triumph Vitesse, John is poring over photographs of racing cars, whilst I’ve been waylaid by the images of drivers and, in particular, a photo of my 1970s movie hero Steve McQueen. Book a room at the Hôtel de France in La Chartre-sur-le-Loir and a wealth of motor racing history comes free, not to mention the odd movie star. 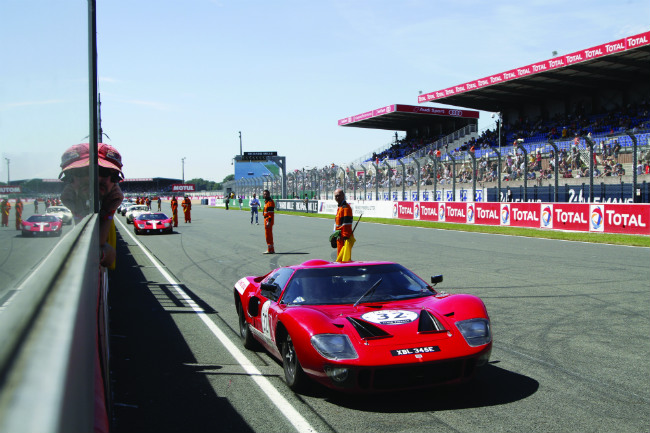 The 24 Heures du Mans is the oldest endurance race in the world. Photo: Shutterstock

In the 1950s and ‘60s, motor-race teams, sports fans, and celebrities of the day all stayed at this iconic Art Deco hotel, around an hour’s drive from Le Mans. Think Mario Andretti and Stirling Moss, Graham Hill and Jacky Ickx, Bobby Kennedy and Jackie Onassis. And, of course, petrolhead movie legend McQueen, star of the 1971 racing epic Le Mans.

It was 1953 when racing manager John Wyer first used the Hôtel de France as HQ for his Aston Martin racing team before the 24 Heures du Mans, and over the intervening years, teams from Porsche, Ford, Ferrari, Triumph and TVR have all prepared their cars in the hotel’s courtyard garage.

When eventually John and I tear ourselves away from the wall decor, we find that our tranquil room overlooks the side courtyard, already familiar from archive photos showing it filled with Aston Martins. 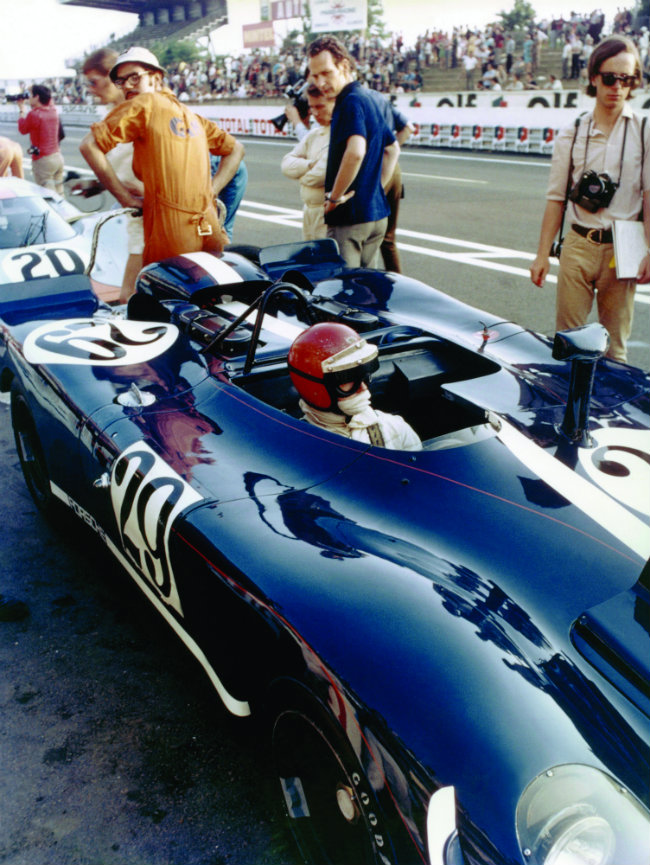 Today the Hôtel de France is owned by British entrepreneur and classic car racing aficionado Martin Overington, and whilst its guest rooms have all been brought right up to date, the atmosphere of decades past is still infinitely tangible. Classic car owners still make detours to stay here and in mid-September when we visit, we find several gleaming models parked outside, their British owners heading for Angoulême and the annual Circuit des Remparts. The racing cars may have gone, but the team bosses, mechanics and drivers who were once pictured at tables outside on the square have simply been replaced by another generation of enthusiasts. 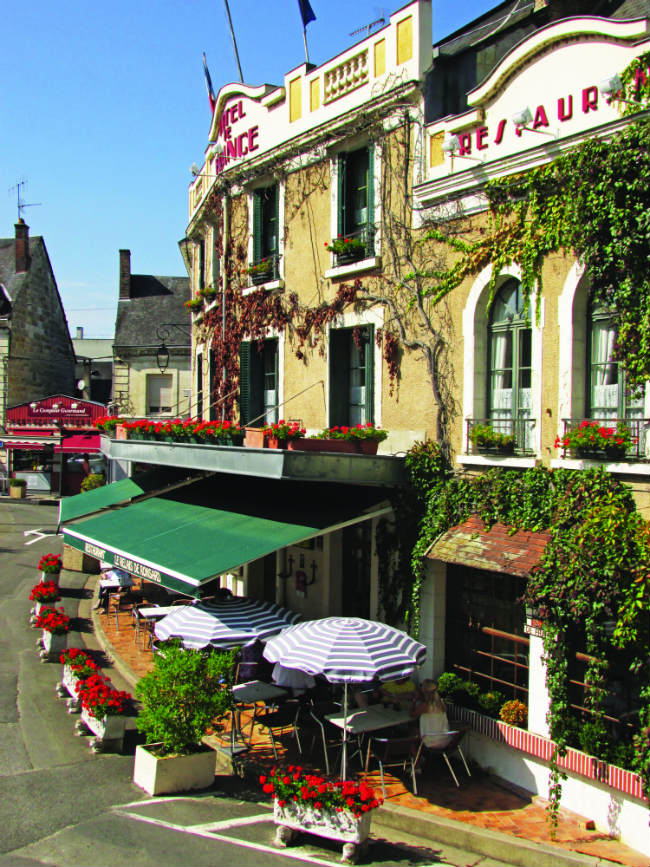 But what of the race itself, the 24 Heures du Mans, which this year takes place on Saturday, June 15? To find out more, we head the next morning to the legendary Bugatti Circuit southwest of the city and heart of the 24 Heures race. And as we pootle leisurely through quiet farmland along straight roads, it’s easy to imagine the racing teams from the ‘50s and ‘60s in a colourful procession amidst mounting anticipation. Motor races from town to town first started in France at the close of the 19th century, but it wasn’t until 1923 that the first 24 Heures race was staged at Le Mans, the brainchild of three local businessmen and car enthusiasts, Charles Faroux, Georges Durand and Émile Coquille. 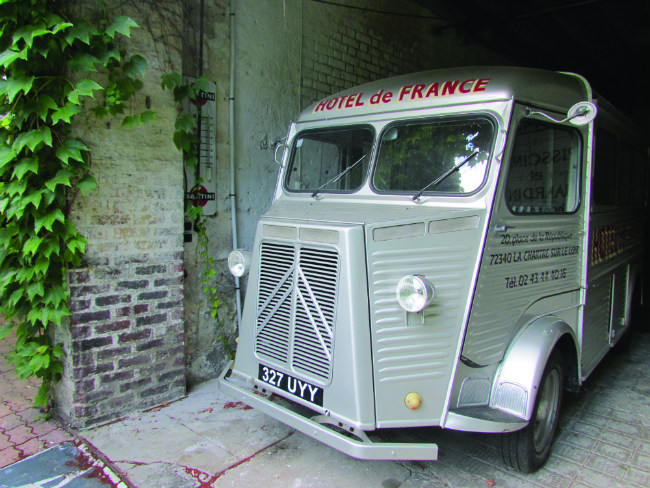 Today this iconic endurance race is still revered by international motorsport fans and the city remains steeped in the automobile industry. Renault still has a factory here and the Bugatti Circuit – run by the Automobile Club de l’Ouest (ACO) – hosts a full programme of car, bike and truck races throughout the year, as well as private hire events for club training and competitions. There’s been a museum at the Circuit since 1961. But the current incarnation, which contains 130 historic vehicles and a wealth of background information, was opened in a purpose-built building beside the main entrance in 1991, making it easier for people to visit.

Everyone here is united by a love of motorsport. Whilst waiting for the doors to open, we fall into conversation with two gentlemen from Biarritz, and within moments, mobile phones have come out and photos of classic vehicles are being mutually admired. Inside, visitors take a self-guided tour with an audio- guide but we’re lucky to have a little extra insight from 24 Heures event commentator Bruno Vandestick who explains the importance of Bentley’s participation in the inaugural event. 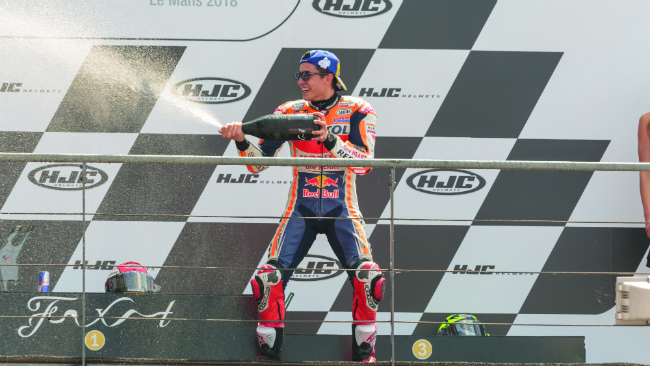 The tradition of spraying Champagne was born in Le Mans. Photo: Shutterstock

“Only a few families owned a car in the early 1920s and there were no asphalt roads, so a 24-hour race gave manufacturers an opportunity to prove their cars’ reliability,” explains Bruno. “A 24-hour bike race had been held in Paris the year before but Le Mans was the first endurance race for cars. Without Bentley, who took the lap record at that first event, it would have been 100% French and probably not have become popular so quickly.”

As we make our way towards the car collection, we pass tribute boards to some of the big names of motoring. Legends like Henry Ford II and Enzo Ferrari; multiple Le Mans winner Derek Bell; 2018 winner Fernando Alonso, and yes, Mr McQueen again, who put the track out of action for six months during filming. And whilst the movie won’t go down as one of his best, McQueen’s pet project did much to bring the race to a wider audience and remains required viewing for any Le Mans fan. 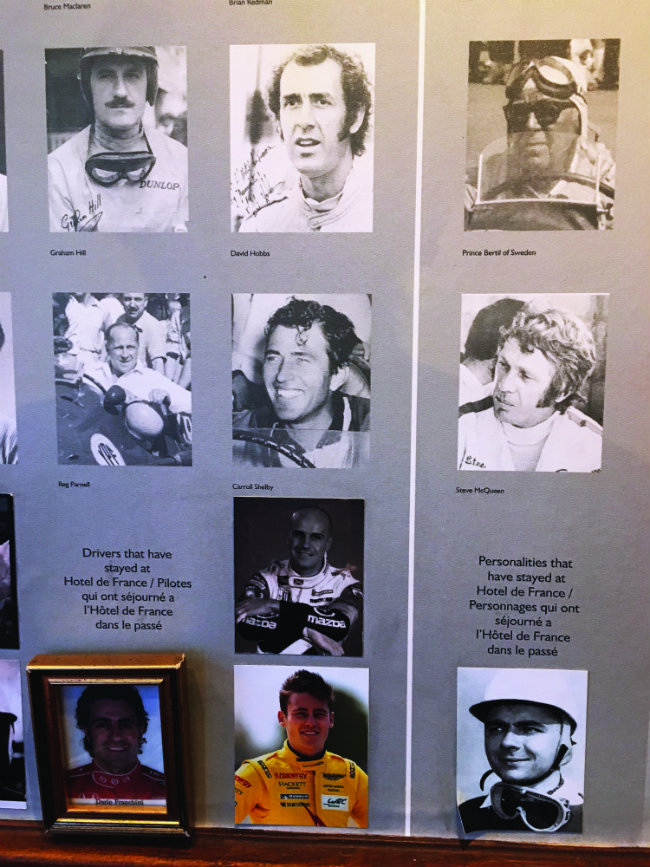 The bar’s wall has a montage of photographs of legendary racers and 24 Heures champions. Photo: Gillian Thornton

I’ve only a passing interest in motorsport, but as we meander amongst the gleaming bodywork, the archive films, and unique artefacts, I’m really caught up in the drama and atmosphere of the race. And I find out why Le Mans was chosen as the venue for this epic endurance contest.

“The city was at the forefront of motoring as early as 1873, thanks to the Bollée family who manufactured bells in Le Mans,” Bruno goes on. “Amedée Bollée was fascinated by mechanics and became the first person to build a steam-driven car, L’Obéissante. In 1875, he drove it from Le Mans to Paris in 18 hours at a top speed of 40km an hour.” Bollée’s house in the city was the first private residence with a garage and soon car ownership caught on amongst wealthy local residents. Bollée quickly produced other models too, including La Mancelle (the term for female residents of Le Mans), the first automobile to be produced in a series of 50 cars. Local roads were improved thanks to those early Bollée customers and as a result, the Circuit de la Sarthe was chosen out of 17 candidates by the Automobile Club de France for their first Grand Prix. The 103km race took place on open roads to the northeast of the city in June 1906. 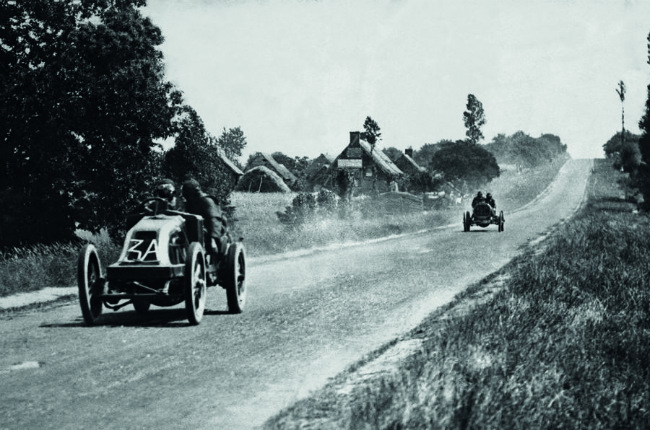 In the early days, racers would drive their cars through the Loir countryside to the circuit. Photo: Hotel de France/ 24 Heures du Mans

Bollée’s fascination for propulsion knew no limits and in 1908, he invited the Wright Brothers from America to make the first flight in French air space, an event commemorated today by the Rue Wilbur Wright in Le Mans. Fast forward to 1923 and those three entrepreneurs who dreamed of an endurance race.

No moving visuals exist of the inaugural 24 Heures, but the museum is proud to have one precious photo and a poster. The event was a big success with only three of the 33 competitors failing to finish, and the only foreign competitor, Bentley, was to pioneer an enduring Anglo-French relationship that still permeates the trackside and campsites. 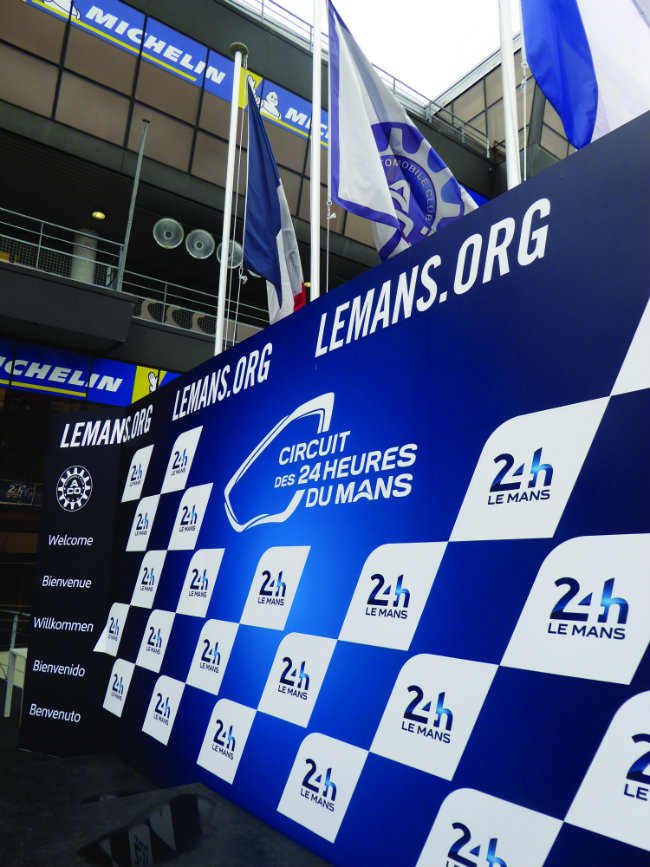 Today, more than 20 different nationalities take part, with two-thirds of the race taking place on a 13km stretch of public roads, the rest on the Bugatti Circuit (around 4.2km). Health and safety issues have, of course, improved dramatically across the years. Early photos show that not only have cars become more aerodynamic, but also the drivers – no more windswept hair and rolled-up shirt sleeves! Nor running starts that led to some drivers starting without their safety harness… 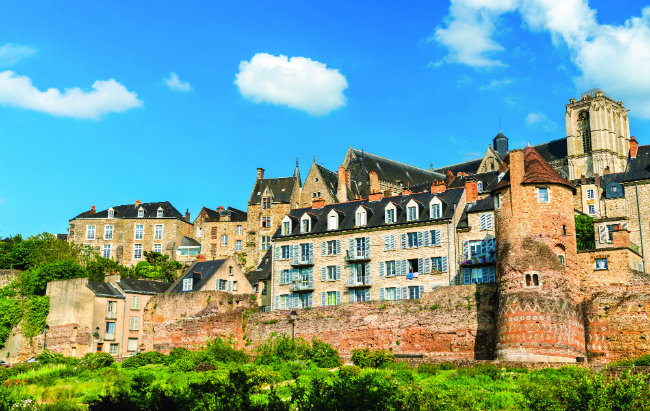 Le Mans is a historical gem and the birthplace of the Plantagenêt dynasty. Photo: Shutterstock

Museum visit over, we head inside the historic circuit. Visitors can tour designated trackside areas unaccompanied with an audio-guide or, like us, opt for a guided tour that includes the Race Control Centre and the winners’ podium.

We’re lucky to catch the roar of engines, thanks to a private hire day by a motorbike club, which brings an unexpected atmosphere to the control centre. Thirty people work here during the 24 Heures, which is recorded from different angles on 36 screens. 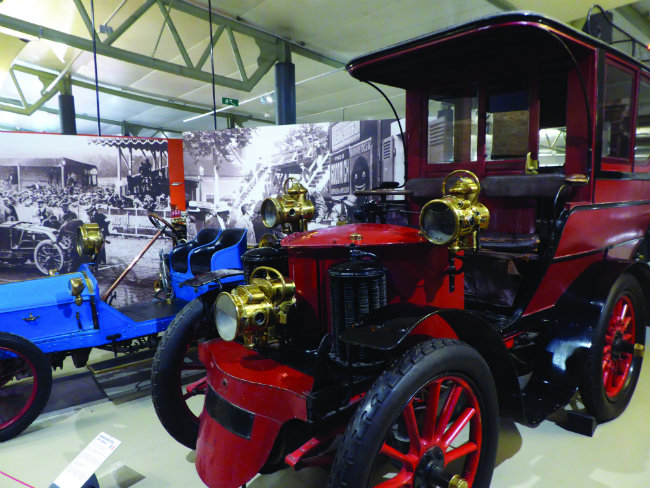 Then it’s out onto the winners’ podium for the obligatory Kodak moment above the track, despite glowering skies.

This, I discover, is where the tradition of spraying Champagne began in the 1960s when the American Ford team competed for the first time and the President offered Champagne to the winners. 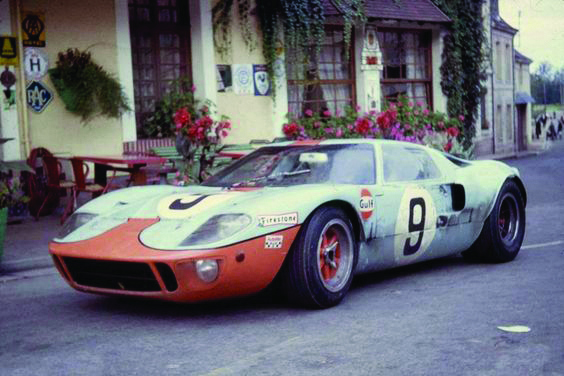 Left out in the sun, the bottles exploded when opened and the crowd loved it so much, a motor-racing tradition was born.

Last stop on our tour is the museum boutique, packed with unique monogrammed souvenirs from baby romper suits to adult leisure wear, key rings and coasters to books and teddy bears.

There are gifts to suit all pockets but my eye is immediately drawn to a large display of Steve McQueen memorabilia – shirts, books, videos… Was I tempted? Now what do you think? 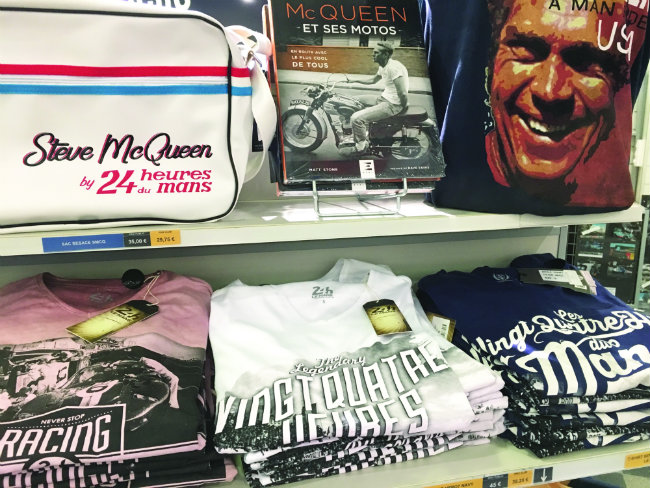 SIDEBAR: THE MAGIC OF LE MANS

Strategically positioned on the river Sarthe, Le Mans packs a picturesque punch from every angle, starting with the high walls built in red brick at the end of the 3rd century AD around the Roman city of Vindinium. Decorated with white geometric patterns, these towering ramparts are punctuated with round towers facing the river.

Head up into the pedestrianised Cité Plantagenêt where the whole dynasty got under way in 1128 with the wedding of Geoffrey V Le Bel, Count of Anjou, and Matilda, daughter of King Henry I of England. Clearly something of a fashionista, Geoffrey would ‘plant’ sprigs of broom – genêt – in his hat whilst out hunting, earning him the nickname of Plantagenêt. Their son would become Henry II and their grandsons, Richard the Lionheart and King John. 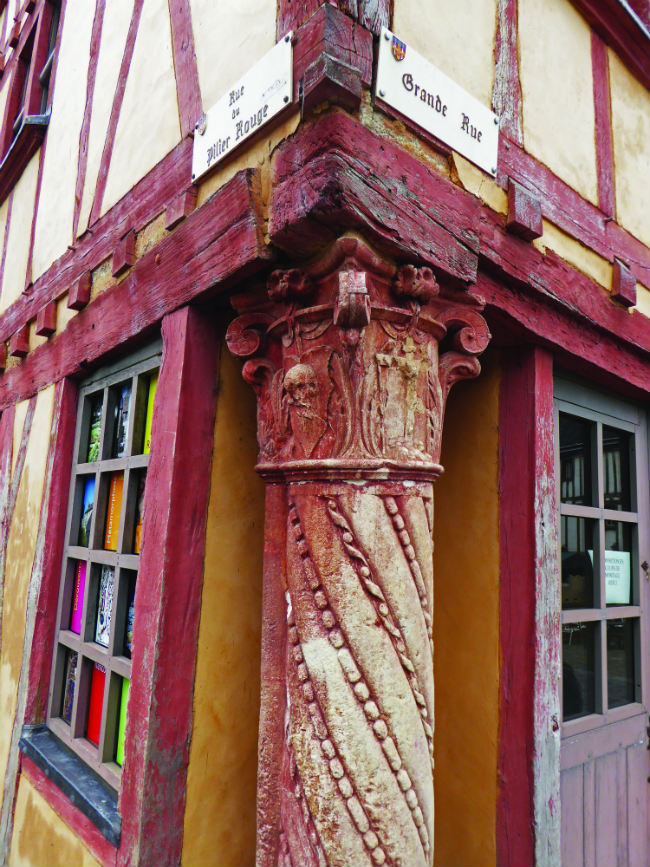 Start your visit at La Maison du Pilier-Rouge, one of many half-timbered properties in the historic quarter, and now home to the Tourist Office, to pick up annotated maps or book a guided tour. Must-see sites include Geoffrey and Matilda’s wedding venue, Saint-Julien Cathedral, with its glorious chapel decorated with 47 music-playing angels; the remains of the Roman baths; and the Carré Plantagenêt museum of local history and archaeology. Feeling peckish? Snack on traditional Le Mans rillettes popularised by local pork butchers amongst 19th-century Parisians, thanks to regular rail links. For more information visit www.lemanstourisme.com 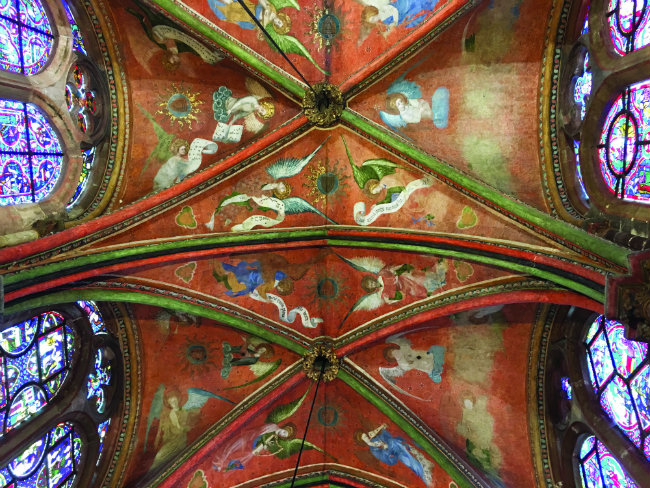 SIDEBAR: TRAVEL IN THE TYRE TRACKS

Around one hour by car from the Le Mans circuit and museum, the Hôtel de France at La Chartre-sur-le-Loir has 25 stylish rooms. Enjoy seasonal gourmet fare at the hotel’s Relais de Ronsard restaurant, closed Sunday evenings and Mondays when guests can eat at La Brasserie (open daily for lunch except Sunday).

We also enjoyed lunch at Chez Miton in nearby Chahaignes, where owners Miton and Naoko combine traditional French flavours with Japanese touches – another favourite with the classic car fraternity. The restaurant is open for lunch, Tuesday- Sunday and dinner Friday and Saturday. 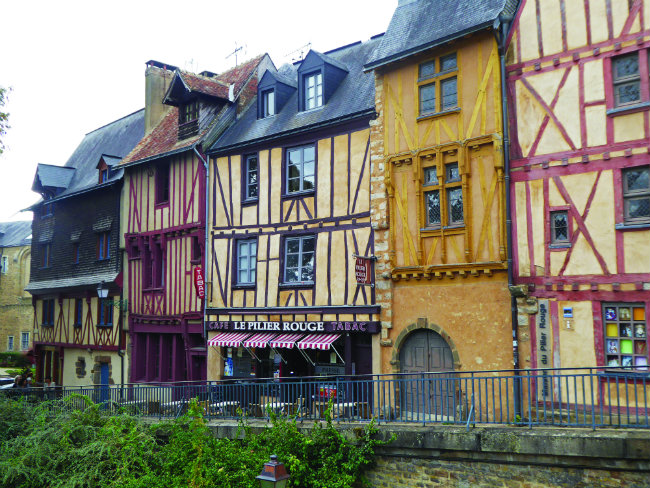 Information on track experience days (over 18s only) is available at www.lemansdriver.fr. Practice and qualifying rounds for this year’s 24 Heures start on June 12 with the race on June 15-16. (www.lemans.org). For tourist information on the Loir Valley go to www.vallee-du-loir.com. 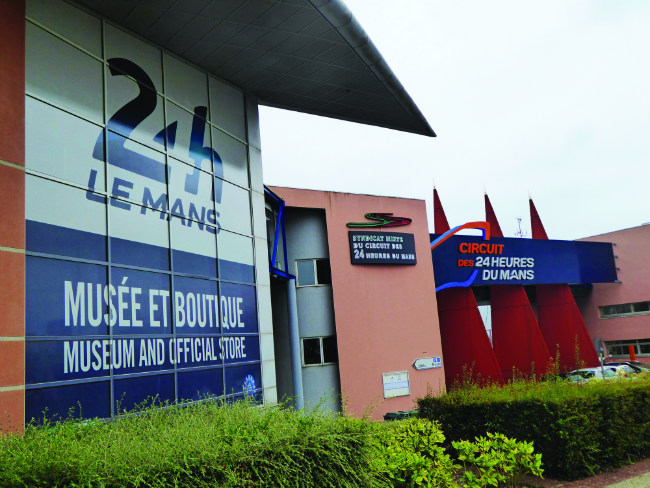