The Top 3 Road Trips in France: A Driver’s Heaven Road tripping is a fantastic way to see France. Renting your own car on holiday opens up a lot of opportunities to visit out-of-the-way villages and sights, without the hassle of organizing public transport for you and your family. These days hiring a car is a breeze, and you can drop off your car at your end destination, allowing for some unforgettable road trips. Here are three of our favourites…

As well as offering some of the most breath-taking views in France, the famous Route Napoléon also boasts a fascinating history, as the name might suggest. In 1814 Emperor Napoléon Bonaparte was forced to abdicate by the Allies after a long and costly period of almost unabated war. The respect for this indefatigable military leader was so great that rather than execute him, the monarchy decided foolishly to allow him exile on the small Tuscan Island of Elba, where he was even permitted to retain the title of Emperor. Within the first few months however, Napoléon had already overhauled the infrastructure of the small island, creating a navy, army and even a mining industry; by 1815 he had already negotiated his escape and return to France, with an army of 700 and the sole purpose of reclaiming the throne. 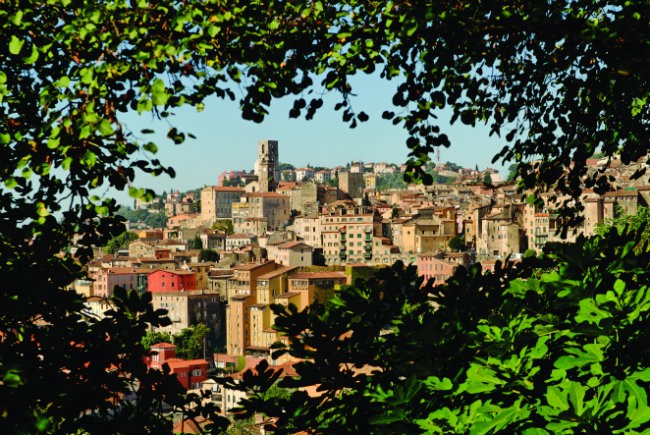 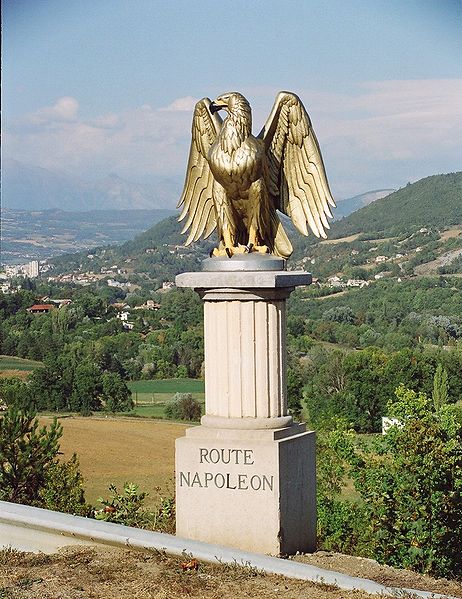 The Route Napoléon is the road taken by the leader from his arrival in Golfe Juan, through the Alps to Grenoble. The route was chosen for its remoteness, allowing him a smooth journey towards the capital. Today this is what makes it one of the best drives in France, owing to the fact that the road avoids the swell of large cities, and passes through extraordinary countryside. The 350 kilometre route makes for a perfect weekend road trip, with ample villages to be explored as you go (Cannes, Grasse, Saint-Vallier-de-Thiey, Seranon, Castellane, Digne, Sisteron, Gap, Corps, La Mure and Grenoble). Perhaps the highlight of these is the ancient Provencal town of Grasse, which is known as the perfume capital of the world, and much of its industry is still dedicated to producing heavenly scents. 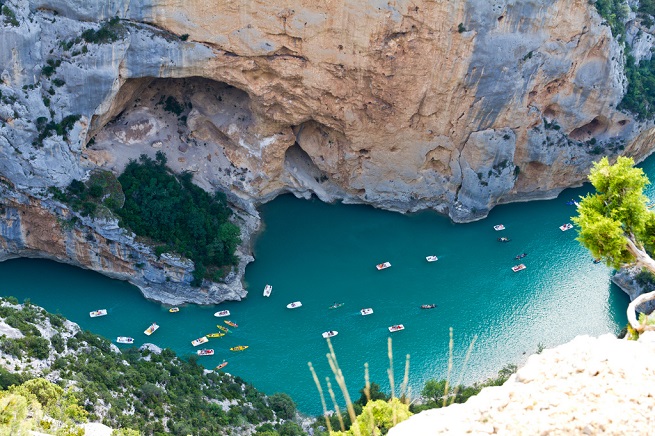 Take a detour off the Route to the Verdon Gorge, France’s very own Grand Canyon; you will not be disappointed! 25 kilometers of rivers and ravines to explore, either by walking or cayak.

Useful Information
Fly to: Cannes or Nice.
Car rental with Auto Europe at either of these airports, return at Grenoble.
Distance: 350 kilometers

The small Burgundian departement of Côte d’Or is consecrated ground for appreciators of fine wine. A short road trip from Santenay to Dijon takes you past some of the most hallowed names in oenology, from Romanée-Conti to the village of Volnay. This 65 kilometer drive is not to be hurried, with a number of fascinating stops along the way. 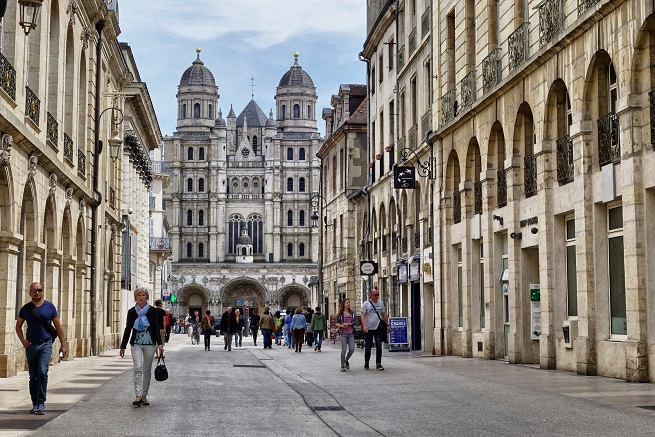 First up is the city of Dijon, containing some of France’s richest history. Climb the Phillipe Le Bonne tower and take in spectacular views of the ancient city; the highlight being the Église Notre-Dame, a 13th century Gothic church of unparalleled beauty. Visitors to the church can bestow upon themselves years of good luck by touching a well-worn carving of an Owl on the North side of the church. 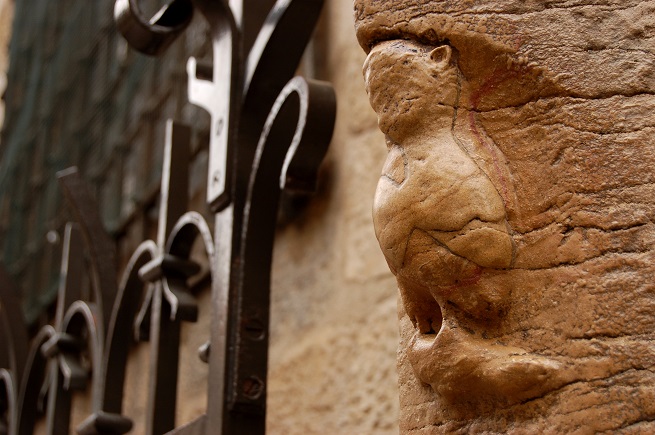 The route from Dijon to Beaune takes you through some breathtaking scenery dominated by vineyards. The highlight has to be the commune of Vosne-Romanée, where the world’s most collectible wine is produced, the Romanée-Conti. Only 600 cases of this Pinot noir are sold each year from the 1.8 hectare vineyard, and bottles have fetched up to quarter of a million for a case of eight, so don’t expect to take any home with you, but their are plenty of more reasonably priced chateaux in the area!

Next up is the beautiful town of Beaune, famous for its 15th century wine auction house, the Hospices de Beaune. This wooden- beamed building was once an alms house, providing charity for the poor, and still to this day it holds a charity wine auction in November by candlelight! 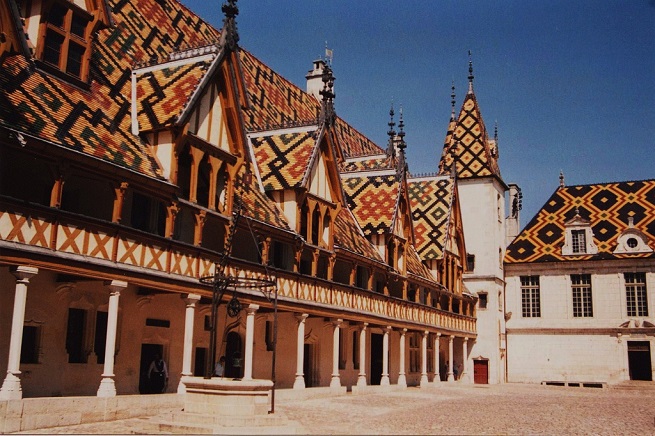 The final leg of your journey to Santenay takes you past more beautiful wine countryside, but this time with more reasonable price tags. The Village of Volnay is not to be missed, with many chateaux offering cellar tours and tastings. Look out for Boillot, Bouchard Pere et Fils and Domaine des Comtes Lafon.

Useful information
Fly to: Paris or Dijon
Car rental with Auto Europe at either of these airports.
Distance: 65 kilometers

Upon your arrival, pick up your car rental at Bordeaux-Merignac Airport and you’ll be well equipped to explore this beautiful, romantic region at a leisurely pace which you dictate. While it’s nearly impossible to explore the entirety of Bordeaux’s wine country in a single week, on the first two days you’ll have time to walk the city of Bordeaux, dine at 5-star restaurants, and enjoy short drives to excellent vineyards just outside the city limits. 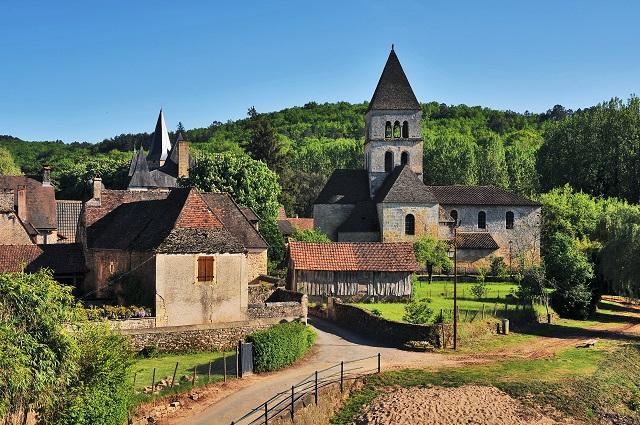 Next up is Saint Emilion, just 50 minutes from Bordeaux. This is a region many wine lovers in America have probably heard of. It’s one of the most famed sub-regions in Bordeaux, renowned for the production of Merlot and Merlot blends with rich, soul-renewing flavor profiles. 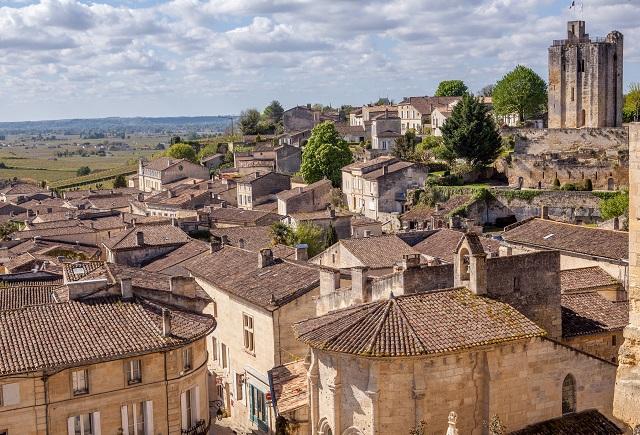 Pomerol and nearby Fronsac are located just Northwest of Saint Emilion, and each of these small sub-regions contain 2 appellations: Pomerol, Lalande-de-Pomerol, Fronsac, and Canon-Fronsac.

Our advice is to split day three equally between these appellations. Select a vineyard in each, and schedule 4 tastings, spread throughout the day. This will make for a very educational tasting experience – whether you’re a connoisseur or a beginner, you’ll learn to identify subtle differences in mouthfeel, tannins, and the character imparted by the fruit.

Driving Northwest, back through Bordeaux to the Medoc sub-region will allow you to discover some of the most famous Cabernet Sauvignon vineyards in the Bordeaux region.

Bordeaux’s southern, right bank sub-region is known as Entre-Deux-Mers. While it isn’t known for expensive, high-end wines, it’s a fun region to explore on the last day, and will allow you to save a bit of money after what could easily have been an expensive Bordeaux wine tour! 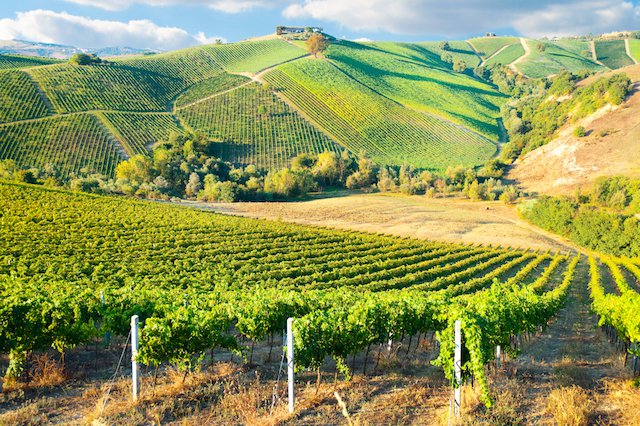 Entre-Deux-Mers’s six appellations are known for inexpensive, but high-quality dry white wines, light, fruity red wines, and sweet white table wine production. Start by exploring the Bordeaux Haut-Benauge, Loupiac, Cadillac and Sainte-Crox-du-Mont appellations before working your way north through the heart of Entre-Deux-Mers and back to Bordeaux, for a relaxing dinner. This leaves you only 18 minutes away from Bordeaux where you can return your car at the airport!

Useful information
Fly to: Bordeaux
Car rental with Auto Europe at either of these airports.
Distance: 197 kilometers

For more information and rates for a range of different car rentals all over France, visit Auto Europe now!