Touring Languedoc-Roussillon in a classic car 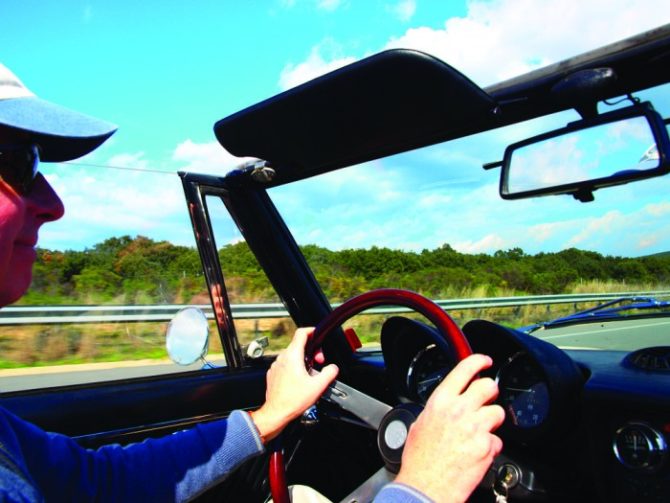 She was waiting for me on the quayside at Sète, sitting pretty in the late Spring sunshine, alongside the sparkling waters of the Canal Royale. I admit that I was nervous – finally, a date with an Italian model I’d been hankering after for years. Wearing her forty two years with extraordinary grace and élan, as I arrived she was already catching the attention of passers-by…

“She” was an Alfa Romeo Spider, and ever since watching Dustin Hoffman race around in one during The Graduate (1967, also starring Anne Bancroft and the lovely Katherine Ross), I have had a soft spot for this model. I know I’m not the only one with this fixation from my youth so I can say – without too much embarrassment – that it was the fulfilment of an almost lifelong dream to drive one of these iconic Italian cars, especially in a country where they still have quiet, drivable back-roads and, more often than not, decent road surfaces.

Classic car purists will quickly spot that the Graduate car was a red Series 1 (“boat-tail”), while I was driving a slightly later 1972 Spider, Series 2, in off-white. But after five minutes behind her wheel, I was already in love with the creamy-skinned beauty, so who cares?

She started first time, and after some heaving of the steering wheel and a crunch as I eventually found reverse gear, we were off! It was a little nerve-wracking getting out of the one-way system around the canals and bridges of Sète, especially as I was yet to become familiar with the lack of power steering and brakes. But as we eased out of the traffic, I begin to feel more confident and ‘J’ noticed a broad smile on my face – something which was due to become a permanent feature over the next 36 hours.

We were touring the Hérault département for a few days and the charming fishing village of Bouzigues was our first port-of-call. It was past midi and the harbour-side restaurants were already filling up. Bouzigues is seafood central – the famous oysters and mussels of the Bassin de Thau have to travel roughly 200 metres from their cultivation beds to your plate. Gingerly, we eased the Alfa into a parking space between two huge 4x4s and headed for our table at La Voile Blanche. I had a craving for moules-frites but was ceremonially told that it’s ‘for the kids’, so I manned up and went for the plate of huîtres (superb) followed by soupe du jour (terracotta-hued fish soup, naturellement, with an intense flavour). Meanwhile, J enjoyed stuffed mussels and sea-bream, which were as local as you can get. As it was a little chilly, we ate in the sunlit warmth of the glazed eating area and watched the harbourside bustle.

After lunch, returning somewhat anxiously to the car, owing to the 4x4s, we were relieved to find her sitting all alone with a gathering audience of intrigued schoolchildren. As I started her up, I blipped the throttle a couple of times for effect, and as I coaxed her into first she made a suitable rasp and we roared off, which pleased me and the assembled schoolchildren.

We then headed inland, along gently undulating roads with vineyards on either side, a reminder that the Hérault (and the whole Languedoc-Roussillon) is one of the world’s biggest vineyards and producers of affordable wine. Our destination, L’Abbaye de Valmagne, boasted a viticultural pedigree to sit alongside its religious heritage, and we looked forward to a little dégustation (un petit verre for the driver) to follow the history lesson provided by our guide. Getting away from the traffic gave me a chance to get to know the Alfa a little better and the route delivered some lovely sweeping bends. The Spider isn’t a fast car by modern standards, but that would be missing the point. It offers a driving experience in the old-fashioned sense and as you turn the wheel, you feel truly connected to the car and road surface. Changing gear, touching the throttle to keep the revs up, is a visceral feeling. The gearbox is odd, with a wide gait, but somehow it just delivers more pleasure.

As we neared Valmagne, we found ourselves on one of those quintessential French roads – lined by plane trees, winding onwards into the distance, and not a soul to be seen. I stopped, had time to saunter down the road with the camera to take a few shots, climb back in and still not another car passed. Ah, France.

A Cistercian abbey for nearly 700 years, once home to over 300 monks, the tranquil L’Abbaye de Valmagne sits on a sheltered hillside near Villeveyrac. Remarkably, it is one of the few abbeys to have escaped demolition during the French Revolution, and in 1791 was sold into private hands. Since that time, the vineyards – which were originally planted by the monks – have been developed by successive generations and the Abbey itself is used for wine storage. The apse and side chapels of the Abbey are impressive for their 25-metre height and sense of serenity, but are equally notable for the enormous (750,000 litre) Russian oak wine barrels which are set into stone bays on either side. Our guide, a direct descendant of Count Henri-Amédée-Mercure de Turenne, who acquired the Abbey and vineyards in 1838, described her childhood – growing up with the Abbey as her playground and the monks’ refectory as the family dining room. We thought that it must have been fun but rather chilly in the Winter. Over the years, the Abbey has been immaculately restored by the family and they produce a super range of bio (organic) wines which can be sampled on site, including examples of the new appellation, Grès de Montpellier.

We then cruised off towards Pézenas for an overnight stay. The sun was setting and the air getting cooler but we kept the Alfa hood down and were pleasantly surprised to find the heater functioned properly. This made for a suitably stylish arrival at the Distillerie de Pézenas, a recently opened boutique hotel and spa just outside the historic centre of town. However, all sense of style and decorum were lost as we struggled to put the Alfa’s hood up.

Poring over the map during dinner at Le Vieux Coq restaurant in the old part of town, I became a little apprehensive about our destination for the next morning and whether the Alfa’s brakes – or my driving skills – would be up to the challenge. We were heading for St Guilhem-le-Désert, a historic mountain village on the St Jacques de Compostelle pilgrims trail, and the map was showing a lot of winding roads.

The following morning dawned bright but cool and dewy. The chaps at Classic Car Rental had given me a few pointers about the car and I put one to good use. To start her cold, give it half-choke and two blips of the accelerator. Parfait! It worked first time and she roared into life, then seemed to be saying “Where to now?!” We donned our caps and scarves and set off en plein air for mountain passes that, rounding every bend, were looming larger and more dramatically in my mind.

I shouldn’t have worried. It’s a pleasingly gentle climb up the foothills to St Guilhem – the roads are good and the barriers reassuringly solid-looking as you meander up the steep valley. The Alfa coped with ease, my confidence was up and I was beginning to take the corners with some brio, shifting through the gears with only the occasional crunch as the synchromesh struggled to deal with my novice technique.

We felt blessed to arrive in St Guilhem-le-Désert in full sun and a cloudless blue sky, especially as the locals had suffered a hard Winter and several deluges of rain. Classified as a Unesco World Heritage site in 1999, the picturesque village was originally founded in 804AD by Guilhem, a soldier turned monk and cousin to Charlemagne. We wandered the ancient streets of this historic village with our guide, who, aside from pointing out some of the remarkable architecture and local legends, also explained that we were fortunate to visit on such a pleasant day and have the place virtually to ourselves. Amazingly, this tiny village of only 250 inhabitants sees over 650,000 visitors arrive every year.

St Guilhem’s narrow streets reveal fascinating medieval architectural details, and also contain some charming craft and artisan shops for those all-important souvenirs. The village is popular not just with tourists who appreciate the history and scenery, but also for those pilgrims visiting the Gellone Abbey, which contains a relic of the true cross given to Guilhem by Charlemagne. Pilgrims en route to Santiago de Compostela will leave the village and head through the craggy, imposing mountains on their journey towards Toulouse.

There remained just time for a leisurely lunch in the village before the final lap of our tour. With so many visitors, it’s perhaps not surprising to fi nd a number of cafés and restaurants squeezed into St Guilhem’s winding streets. However, we did unexpectedly come across a small hotel and restaurant offering exceptional food and stylish accommodation. La Table d’Aurore at hotel Le Guilhaume d’Orange sits in the heart of the village, overlooking the steep valley and right opposite the tourist office. Depending on the weather, you can eat outside on the terrace or in the immaculate dining room. Aurore buys only local produce and evidently cooks with verve and passion, while the hotel has ten bedrooms, all charmingly decorated. The art de vivre (the art of living) is evidently alive and well here – we only wish we could have stayed longer.

An hour down the autoroute and we were on the outskirts of Montpellier, back in the traffic. Alas, this Italian-French affair was destined to be just a brief romantic fling. Only 36 hours after our first meeting, we parted company with the Alfa in the mundane surroundings of an airport car park. But our memories remain and we’ll always have the Hérault.

Looking for a language school in Languedoc Roussillon?

Previous Article All About Brigitte Bardot
Next Article Champignons de Paris: The Famous Mushroom and their City Farmers