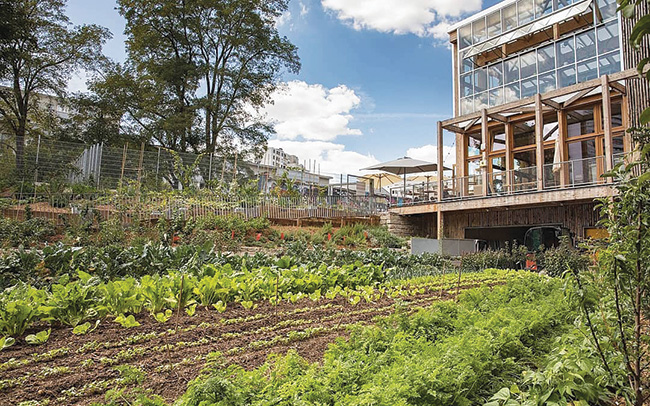 Stephen Clarke negotiates the rules of dining on an old railway line.

Even after having lived amongst Parisians for almost 30 years, I find they can still catch me off guard. Paris is spending a lot of effort and money greening itself up: cycle lanes are appearing everywhere, benches are now often made of old railway sleepers, and disused buildings are being given a new lease of life. Some of these are the former stations along the Petite Ceinture (literally: small belt), the circular railway which is the ancestor of the Métro.

In the mid-19th century, a 30km train line was built around the city limits to help workers commute without going through the newly renovated city centre – Baron Haussmann didn’t want his chic new boulevards getting clogged up with commuters in shabby working clothes. But the Petite Ceinture was gradually replaced by the Métro and bus routes, and finally went out of service in 1934, after which it fell into picturesque decay, becoming a haven for weeds, wildlife, graffiti artists and homeless people.

For the past 15 years or so, the City has been converting sections of the line into public walkways – coulées vertes, or green corridors – and turning the old stations into cafés away from the urban bustle. One of the most recent projects along the Petite Ceinture has been the creation of an urban farm in my neighbourhood, on the northern edge of the city.

Beside seasonal plantations of herbs, vegetables and very tasty raspberries (to which you can discreetly help yourself), there’s now a beautiful wooden building that provides housing for homeless people. And the kitchen garden supplies fresh produce to a new restaurant that attracts all the trendy locals – like moi, of course.

Most of the waiting staff are hipsters (facial hair obligatory for males), so it was the last place where I expected to be caught off guard by a stereotypical Parisian waiter’s technique. Four of us wanted to dine there. It was a balmy evening, so the terrace was, unsurprisingly, almost full. It is standard Parisian etiquette to check with the waiting staff before grabbing a table at a restaurant, so we asked a cool-looking young chap if it would be okay to go and sit at a table on the edge of the terrace, near the former railway. “Bien sûr,” he told us, waving us off in that direction. We duly sat down and waited for menus, cutlery and maybe something to eat and drink.

For five or ten minutes, nothing happened, even though another waiter, more senior, judging by his longer beard, flitted nearby delivering orders. Finally, even though this was a hipster place so it’s not cool to be uncool, I caught his eye, smiled, called out “bonsoir” (all compulsory tactics if you want a Parisian to serve you) and raised a hand, giving him a microscopic beckon, which is as far as you can go with a French waiter if you want relations to be cordial. He came over, frowned at us and demanded: “Who said you could sit there?”

I couldn’t believe it. I was tempted to ask, “Where do you think we are, the 7th arrondissement?” (the chic area of central Paris where old money lives and ministers eat). I’d only ever witnessed this kind of attitude in men wearing bow ties and black aprons, working at restaurants where the tablecloths are so starched they hardly need a table to hold them up. But all I said was, “Your colleague told us to sit here.”

And then I gave him a smile that implied we were neither insulted nor cowed by his attitude, so we might as well all get on with our new life together. “I’ll bring you the menu with tonight’s specials. Would you like something to drink?” he said. No apology, but we had been accepted. It was a mildly annoying experience, but a reassuring one, for it was a sure sign that this new restaurant on a section of reclaimed railway had become instantly, and extremely, Parisian.