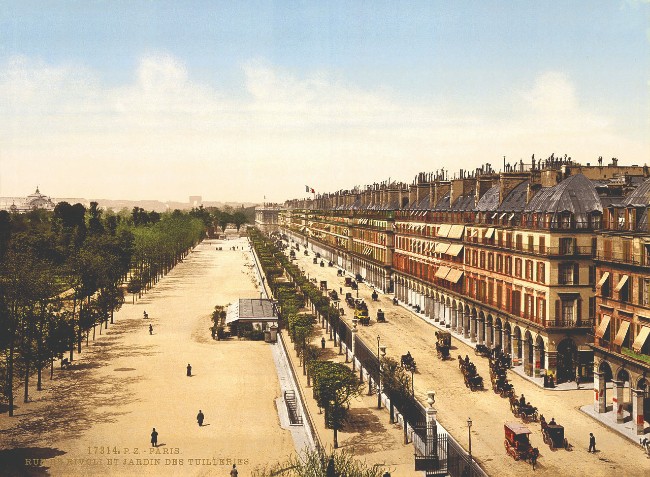 The colonnaded storefronts lining one side of the rue de Rivoli attract shoppers; the Tuileries Gardens and Louvre Museum along the other provide quite the backdrop.

There is so much to see on the three kilometres from place de la Concorde to rue de Sévigné that you’d be forgiven for never pausing to wonder how the street came to be named Rivoli. Well, the story goes back to Napoleon.

When a new thoroughfare was cut out through the dense core of Paris on the expanded northern side of the Louvre Palace, it turned out to be quite a successful feat of urban planning. It was named after Napoleon’s victory over Austria at the Battle of Rivoli in 1797. The French forces were outnumbered, yet they triumphed, and the victory greatly enhanced Napoleon’s reputation as a military strategist and commander.

Napoleon didn’t get to see his plans for rue de Rivoli fully accomplished. The completion of the section from the Louvre to the Hôtel de Ville was carried out under his nephew, Napoleon III, who put the project high on his list of priorities as part of Haussmann’s renovations because he wanted to have it ready for the Paris Universal Exhibition of 1855, so he could house his guests at the new Grand Hôtel du Louvre.