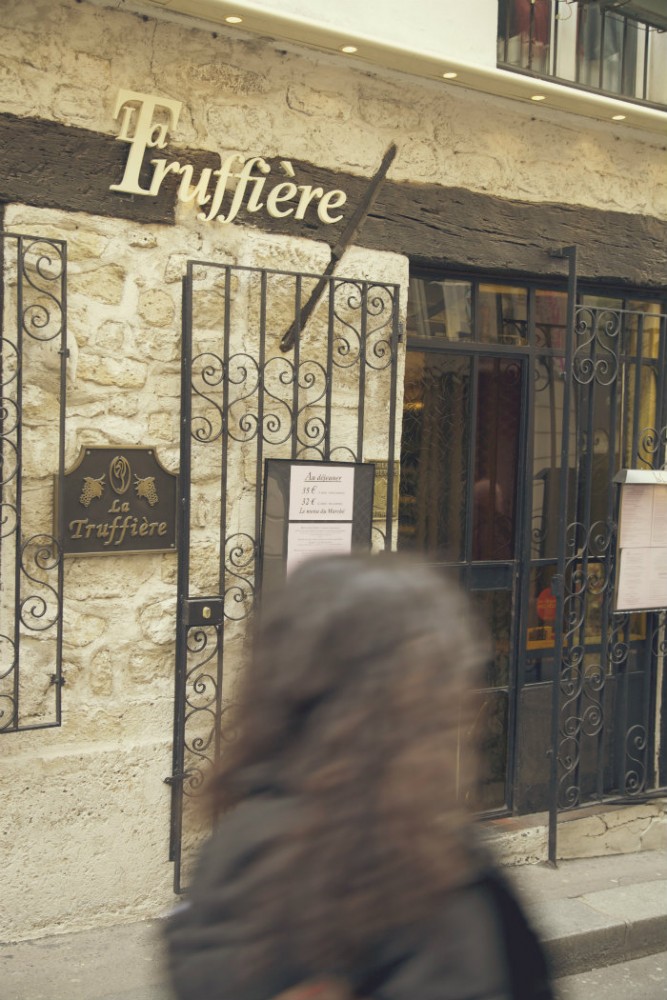 A wonderful way to truly take in the beauty of Paris is to indulge in a picnic in one of the city’s elegant parks or along the Seine. And the best place to stock up on provisions for said picnic is via a jaunt down rue Mouffetard and its surrounding alleyways, to source some of the best gourmet produce to be found on Paris’s Left Bank.

Visit the historic street market on any morning from Tuesday to Sunday and you’ll find your senses inspired by your surroundings – and your mouth watering at the epicurean delights on offer. The streetscape of historic rue Mouffetard – affectionately labelled ‘La Mouffe’ by its denizens – bathes in the gentle glow of the early morning sun. The jovial calls of vendeurs and merchants playfully cajoling each other signal that the morning markets are coming to life.

Their stalls are awash with colour – a palette to satisfy even the most fastidious of artists – as all manner of fresh produce is lovingly displayed in the hope of enticing passers-by. robust fruit and vegetables, fragrant wedges of cheese, fresh oysters and other seafood delights all sit temptingly upon tables along the cobblestone street. Morning church bells fill the air as revellers begin to crowd the street, armed with calico bags, wicker baskets and various other means of toting the gourmet loot they are about to purchase. A well-dressed elderly woman gently caresses each tomato before delicately placing it in her basket, ensuring that she selects only the very best the vegetable seller has to offer.

The scent of freshly baked croissants and robust loaves of brioche wafts from the boulangerie, cloaked in a smell so buttery you can almost feel the layers of pastry melting into your tongue. Nearby, a silken labrador keeps a firm eye on the rows of juicy rotisserie chickens sitting tantalisingly before him. Further up the street a three-piece bluegrass band strikes up a ditty, the distinct strains of a piano accordion adding a particularly French ambience to the bustling scene. Bentwood chairs line the narrow thoroughfare as it winds its way up the hill.

Through the mint-green window of Crêperie Oroyona, sitting near the top of rue Mouffetard close to place de la Contrescarpe, a young Argentine named Sebastian helms the hotplate on behalf of his father who owns the locale. Wearing his signature flat cap and purple apron, he playfully chats to passers-by who lean against the small window in anticipation, as he crafts his paper- thin creations slathered in lashings of Nutella, jams and other delectable sweet toppings.

Meanwhile, on the place de la Contrescarpe itself, restaurants flank the square, lined with the classic rattan cafe chairs in various hues faced out into the centre of the plaza. Espresso-sipping Parisians recline at their leisure, enjoying the spectacle. A man sits absent-mindedly drumming his fingers on the top of an ornate-footed bistro table, while cigarette smoke curls dance a seductive routine above his head as he exhales. In the centre of the plaza, surrounded by bulbous lamp posts, an elegant fountain nestles within a ring of hedges. Close by, a greying cheery-faced gent has wheeled in his beaten-up honky tonk piano and is regaling cafe patrons with his ebullient musical repertoire.

All Roads Lead To Rome

Etched into the worn cobblestones of rue Mouffetard are the footsteps of some of history’s most prolific figures. A remnant of an old Roman road that wound its way south to Italy; this historic market street has endured centuries of modernisation to still maintain an old-world charm that nods to the Paris of old. Many of the buildings that sit cosily along the petite rue date back more than 900 years, their ageing façades graced with fascinating details that gradually reveal themselves if you take the time to look – but only to the keenest of eyes.

In medieval times, rue Mouffetard, place de la Contrescarpe and the neighbouring tangle of streets sat outside the city walls, making the quartier a mecca for artists, writers, musicians and other creative minds who tended to dwell on the fringe of society. Rue Mouffetard’s perch atop Montaigne Sainte-Genevieve nestled in the imposing shadows of the Pantheon, saved it from the zealous redevelopment at the hand of Georges-Eugène Haussmann who famously sought to modernise and – according to some – homogenise the architecture of Paris during the reign of Napoleon III. As a result, many of its charming façades and uneven rooftops remain intact, proudly displaying the weathered nuances of centuries well lived.

It’s not hard to fathom why rue Mouffetard and its neighbouring streets – including rue Blainville and rue du Cardinal Lemoine which branch off place de la Contrescarpe – have proven the inspiration for myriad literary works. Many an iconic character has wandered this street over the years, with eminent scribe Ernest Hemingway calling the neighbouring streets home. In A Moveable Feast, he speaks fondly of the tiny two-room flat at 74 rue du Cardinal Lemoine that he shared with his young wife Hadley in the early 1920s – remarking that it had no hot water or toilet, but “a fine view and a good mattress”. He also evokes images of the market street in its more rustic time, when goatherds would wander up and down the cobblestone stretch selling fresh goats’ milk to its residents.

While Victor Hugo was not present in Paris at the time of writing Les Misérables, it was along these streets that he envisaged the epic tale coming to life. In a desperate attempt to escape capture by his adversary Javert, the character Jean Valjean searched the ‘varied labyrinths of the quarter’ frantically seeking a refuge for himself and the young Cosette. The colourful streetscape of rue Mouffetard has also provided the canvas for many a film. Amongst the cinematic worlds to take place on the famed street was Jean-Pierre Jeunet’s Amélie (it was here that the impish protagonist returned the childhood box of treasures to its rightful owner), as well as Krzysztof Kieslowski’s Trois Couleurs: Bleu, which starred French film doyenne, Juliette Binoche.

But aside from its historic and cultural significance, rue Mouffetard and its surrounds attract Parisians (both native and adopted) due to its mélange of boutiques, vendeurs and irresistibly vibrant atmosphere. Cinéphiles stop off for a matinee at L’Epée de Bois, a cinema at 100 rue Mouffetard, while the younger generations often favour the retro interiors of Le Bowling Mouffetard – the street’s resident bowling alley. Then there’s the quirky mix of fashion locales, ranging from high-end to dirt cheap, that caters to all manner of sartorial tastes and budgets.

But perhaps the most popular event is on Sunday afternoons, when musicians take to sunny place Saint-Médard at the foot of rue Mouffetard, leading revellers in renditions of classic French chansons and other musical stylings. You can simply sit and enjoy the entertainment, or, for those not afraid to test their fancy footwork on the streets of Paris, there’s also always the opportunity to get up and join the locals in a dance or two.

In truth, you may end up succumbing to the tantalising gourmet delights of the quartier long before you’ve stocked your picnic basket with supplies. But such is the beauty of rue Mouffetard, where you can while away hours upon end to your heart’s – and your parisian walkways stomach’s – content.

A passionate argument will often ensue on what makes a good French onion soup (soupe à l’oignon to the locals), as every family has a favourite recipe. But few would disagree on the version served by Café Delmas, which sits on the plaza that begins rue Mouffetard – a perfect spot for people watching.

Nestled in the charming vaulted cellar of a 17th- century maison, Michelin-starred La Truffière is a mecca for epicureans both local and foreign. Immersed in the philosophy of terroir, this gourmet institution crafts exquisite cuisine from traditional produce and seasonal ingredients, including delectable white and black truffles.

The French literary masters are among the world’s most revered, not to mention the countless expat scribes who found their inspiration in the streets of Paris. For those up to the challenge of tackling a tome in French, stock up on literary works at the whimsically named bookstore, L’Arbre du Voyageur.

In 1975, Greek Georges Peltekis packed his bags for Paris with a dream of mastering its language. Almost 40 years later, he’s still here – now the proud owner of L’Assiette aux Fromages – a cosy wood-panelled locale specialising in raclette, fondue and other delicious delicacies of the French alpine region of Savoy.

If the thought of a creamy foie gras makes you weak at the knees, a visit to Pierre Champion is certainly in order. Beyond its bright red façade you’ll find a decadent range of the controversial French delicacy, as well as many worthy accompaniments including myriad wines, terrines and vinegars.

Visitors to Paris often lament the lack of good coffee, which is why so many flock to the Sugarplum Cake Shop, a stone’s throw from Hemingway’s old place. Canadian Taylor McLoughlin and American Krista Juracek also make some of the best baked treats in town to eat in or take away.

Originally published in the June-July 2013 issue of France Today