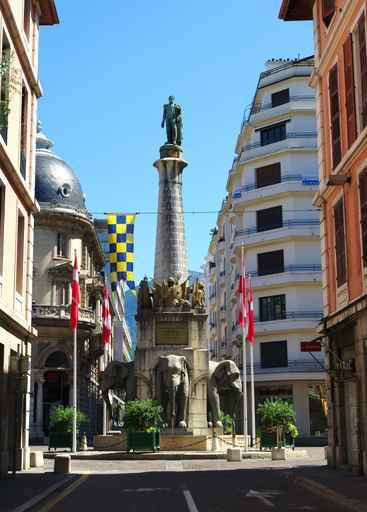 Alpine cities are infamous for their density—after all, a city can only sprawl so far when surrounded by mountains. Chambéry is no different. The oldest houses straddle tunnels known as allées, making the historic center seem more like an underground labyrinth, with barely enough space above ground for ordinary streets. But it wasn’t only the mountains that cramped Chambéry’s style. It was also the swamps.

When Thomas I, Count of Savoy, bought the city in 1232, the Leysse and Albanne rivers spilled over the area, making it more marshland than verdant mountain valley. Nevertheless, the counts of Savoy coveted the city’s strategic position. Perched between the Bauges and the Chartreuse mountains, the small bourg acted as an antechamber to the Combe de Savoie and sat far enough within Savoy territory to be safe from attack.

Thomas’s grandson Amédée V transformed the modest family castle into a majestic château atop the hill overlooking the city. Chambériens had no other choice than to build on the swampy land below if they wanted protection. So they drove larch stilts into the muddy mass and put their apartments on top. Like a house of cards, the more the structures pushed against each other, the more stable they were.

I’ve often driven past Chambéry, which sits about halfway between Grenoble and Annecy. A dreary reputation suffocated the city, which supposedly had none of the charm of a small village without all the excitement of a big city. That was old Chambéry. But recently, word had it that a new Chambéry was begging to be seen and, even better, tasted.

The best mornings in France begin with a visit to the market and Chambéry happily upholds the rule. On the Place du Palais de Justice, the Saturday market begins to bustle around mid-morning. From behind crates holding six varieties of potatoes, Dorothée explains, “There are many regulars, so a lot of people know each other. Most don’t come just for food, they come to see friends, to catch up on the week’s news or just to chat. It gives the market a certain charm. Early on we have more time to talk. Whole families show up later in the morning, and by noon, it’s even crowded.”

No crowds yet, but the chickens are already clucking. A young retiree stops by the poultry vendor to pick up his €10 (live) hen. Fortunately, for those of us without our own farms, not all of the meat market still quacks, moos or oinks. Fertile orchards, vegetable gardens and mountain lakes surround Chambéry, so the market stalls brim with fresh fruits, vegetables and lake fish—including the regal omble chevalier, or Artic char—splashing lots of local color onto the marketplace. And here, as everywhere in Savoy, the culinary holy trilogy—wine, cheese and charcuterie—holds a privileged place. Judging by the long line, the sausages at one particular stand must be some of the best in the Alps.

One baker even offers traditional gâteaux de Savoie, which is not as common as one would think, due to its long cooking time. The symbolic cake looks quite a bit like Italian panettone, and Louis XIV compared it to cakes he found in Milan. Not surprising, really. Before modern France and Italy existed, the dukedom of Savoy stretched from just outside of Lyon to midway between Turin and Milan, and from Neuchâtel in Switzerland to the Mediterranean coast. In other words, the Savoy dukes controlled the all-important Alpine passes that today connect the two countries.

In 1880, twenty years after Savoy became French, Claude and Philomène Folliet founded a small grocery that soon specialized in coffee. Today, many a Chambérien café proudly serves Folliet coffee and the company—a veritable Chambéry institution now—roasts its beans once or twice a week. When the wind turns in just the right direction, the aroma even floats through the allées beneath the raised houses.

Your nose may lead you to the roaster behind the train station, but your taste buds will point to Brasserie Cafés Folliet. A lively brouhaha swells up as the door opens. The server whirls around with a pert bonjour before dashing into the kitchen and back out with plates of boeuf bourguignon aux crozets—small Savoyard pasta squares made with wheat and/or buckwheat flour. If Folliet coffee is the star of the bar here, reliable plats du jour pack crowds in around lunchtime. Next door, the coffee at the cozy Folliet boutique tastes just as rich, but the atmosphere feels worlds away as clients are cocooned in a warm red and yellow decor. A pleasant hostess greets us with an invitation to relax in the tearoom, where teapots and tins line the walls. My cup of bitterly strong Congolese coffee, ground just seconds before, seems more calming than caffeine-spiked. With such single-origin coffees, Folliet offers its contented customers a taste of Brazil, India and other coffee-growing lands around the world.

The austerity of the buildings surrounding the boutique is noticeable. Rebuilt after World War II bombings, they lack the charm of the centuries-old facades of the untouched old town. Not that those are any more ornate, though. Chambéry has always been a bit secretive, and when it came to wealth, the city’s nobles didn’t deck their houses with fancy decoration. You had to be invited inside to marvel at the treasures. And in a way, some things here haven’t changed.

Denis Provent, a master of Savoy cheeses, drove us to an old network of between-the-war bomb shelters and unlocked a metal door to reveal a velvet black tunnel. The acrid smell of ripening croûte fleurie cheese was unmistakable. At the end of the darkness, corridors snaked every which way, with rows of spruce shelves lining the walls. Here, 10,000 tommes des Bauges, tommes de Savoie and tommes de chèvre peacefully molded in the dankness, on their slow way to maturity. Denis manages six other cellars too, selecting what goes in and deciding when it comes out, specialized savoir-faire passed down in his family for three generations.

Cheese has always been a mountain staple, and for the best cheese in the city, Chambériens come to Denis’s cheese shop, La Laiterie des Halles, the ideal place to sample delicious cheeses from Savoy farms, among them reblochon de Savoie, Abondance, Beaufort and Emmenthal, along with the various tommes. From behind the counter, Denis offers advice on which cheeses to choose, as smiling young women wedge morsels off cheese rounds as big as car tires. La Laiterie also sells other local Savoyard products including yogurt, butter, Alpina Savoie pasta, and the famous Opinel knives, created in 1890 by Joseph Opinel, which are made in Chambéry.

Good cheese only gets better when accompanied by a good wine. The départements of Savoie and Haute Savoie produce some 50 cheeses and as many different wines. What’s an amateur palate to do? Pay a visit to Maurice Jeandet. The floor-to-ceiling stacks of wines and liqueurs leave little doubt about Savoy’s vinification and distillation capacities. Whether it’s the four Savoie AOC wines—Vin de Savoie, Roussette de Savoie, Crépy and Seyssel—or white Chignin and red Mondeuse, among others, Jeandet knows them all and can help find a perfect pairing. Few dare to deviate from Savoie whites to enjoy with local cheese-based dishes, but is red taboo? “Of course not,” explains Jeandet. “Savoie reds go very well with cheese dishes. Something lighter like a Gamay pairs perfectly with a raclette or a fondue.” Jeandet is also the place to find light, dry Dolin Vermouth de Chambéry, a regional specialty produced right in town, and génépi liqueur, made with a high-altitude herb found locally in the Chartreuse mountains.

Raise your eyes in Chambéry and if you’re in the right place, you’ll notice a man atop a palm trunk supported by four elephants half-encased in a square pedestal. Meet General Benoît de Boigne. Without Boigne, Chambéry would lack its theater, and would not have had its poorhouses at the beginning of the 19th century. Its Vaugelas High School would be much smaller. The rue de Boigne would be missing its Italian-style arcaded sidewalks. Of course the wide avenue would have a different name, and the symbol of Chambéry would not be la fontaine aux éléphants.

Benoît de Boigne, born Benoît Leborgne in Chambéry in 1751, left home in search of adventure at the age of 17. He wound up leading a powerful army in the name of an Indian maharaja and was appointed governor of a territory that included the Taj Mahal—finding excitement, glory and, above all, a fortune. The French Revolution was not kind to Boigne’s hometown, and when he returned, he used his Indian wealth to restore the city. Naturally, the Chambériens commemorated their benefactor and his exploits, hence the four Indian elephants hoisting him triumphantly into the sky. Why four elephants? To commemorate the four quadrants of the Savoy cross, the symbol of the former royal house and of the two Savoie départements. Boigne may have made his fortune in India, but he was a pure Savoyard.

Looking down the rue de Boigne, the general must feel a certain frustration. Beneath the arcades, Au Fidèle Berger has been satisfying Chambéry’s sweet tooth for as long as Boigne has been guarding his own street. He just missed the chance to savor their bittersweet truffles and light-as-air macaroons. Luckily, you can make up for his lost time.

Au Fidèle Berger (The Faithful Shepherd) hasn’t budged since its opening in 1832—dark wood and marble counters, gilt finishings—and the founding family still owns and operates it. A pyramid of macarons, sumptuous chocolates and tempting pastries lure gourmet visitors in, but the house takes the most pride in its patented creation, the Saint Anthelme. The deceptively light decadence—nougatine butter cream sandwiched between almond meringue wafers—literally floats on your tongue in pure praliné pleasure.

Facing the elephant fountain from the opposite end of the rue de Boigne, the castle of the Dukes of Savoy, the 13th/18th-century Château de Chambéry now houses local government offices and can only be visited on guided tours. The adjacent 15th-century flamboyant Gothic Sainte Chapelle, once the repository of the Shroud of Turin, is now renowned for its extraordinary 70-bell carillon, made in the Paccard bell foundry in Sévrier on Lake Annecy.

Just outside of Chambéry is Les Charmettes, the rented country house of Françoise-Louise de Warens, the great love of the young Jean-Jacques Rousseau. He lived with her there from 1736 to 1738, a period which he described in his Confessions as the happiest time of his life, and he returned off and on until 1742, when he left for Paris. The house, with its formal herb garden, is now a museum in his honor.


Inter-Hôtel des Princes Charming hotel in the center of the Vieille Ville, classified as a historical monument. Doubles from €88. 4 rue de Boigne, 04.79.33.45.36. website


Best Hotel Simple, central hotel in the center city, with all the modern amenities including free Wi-Fi. Doubles from €54. 9 rue Denfert-Rochereau, 04.79.85.76.79. website


Saturday Market Chambéry’s biggest weekly market is at the Place de Genève from 7 am to noon.

Originally published in the January 2010 issue of France Today; updated in October 2012