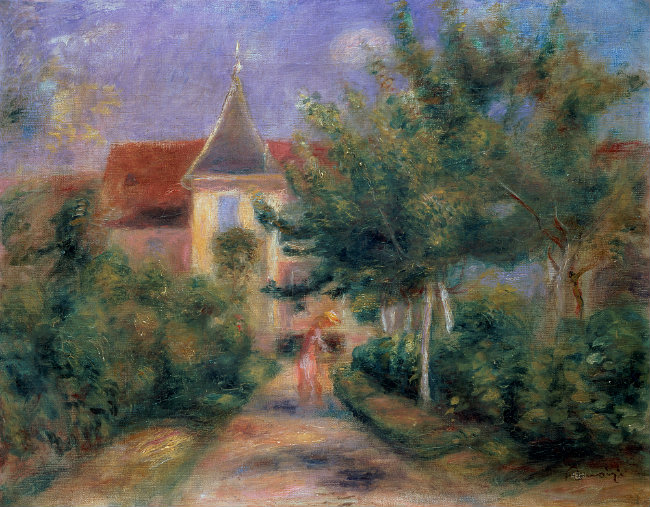 “For me there is no other village like it in the world. There I lived the most beautiful years of my childhood….”  Thus wrote the filmmaker Jean Renoir of his beloved Essoyes in his memoir, Renoir, My Father.

This year, one hundred years after the death of Pierre-Auguste Renoir, Essoyes will once again welcome visitors to this beautiful little village in southern Champagne that provided the Renoir family with a place of rest and relaxation—and for the painter a peaceful place to work—over a period of thirty years.

And on Sunday, July 7, as a highlight amidst a full calendar of special centenary events, visitors to Essoyes will have a chance to see and experience an all-day, village-wide reenactment of life as it was in the first decade of the twentieth century—the place and time Jean Renoir remembered with such affection for the rest of his life.

It was relatively late in his life that Pierre Auguste Renoir first discovered Essoyes; and initially it took some convincing for him to agree to spend time in his wife’s native village. But it didn’t take him very long to fall in love with Essoyes. “I like being with the vignerons,” he said, “because they are generous.” He also expressed a preference for the bread, the butter, the wine made in Essoyes over that found in Paris.

The family home that the Renoirs purchased in Essoyes in 1896 continued to be used by members of the family until 2012. Then Sophie Renoir, great-granddaughter of the painter, sold the house to the village of Essoyes, and, with the help of the departmental, regional, and national government, the village began a major renovation in preparation for its opening to the public as a historic site in 2017.  The house is a prime example of a carefully planned and well-realized architectural and historical preservation effort. It has been recognized with the prestigious Maison des Illustres and Vignobles et Découverte labels: and it is an official site on the Route Renoir of the Routes Européens de l’Impressionisme.

Since 2011 a small but excellent interpretive centre has told the story of the life of the Renoir family in this town, and the painter’s studio has been open to the public. And since the opening of the elaborately restored family home two years ago, visitors to Essoyes are now also able to see something they couldn’t before: original works of art by Renoir, loaned by museums and private collections, and displayed in this intimate setting. This year during the summer months two works that were included in a 1934 exhibition organized by Paul Rosenberg are anticipated to cross the ocean to be on display in the family home. In the meantime, there is a beautiful collection of etchings—mostly works by Renoir himself, but also a portrait by Conrad Slade, and a portrait of Renoir by Bonnard.

As evidence of the fact that this quiet little village was indeed an important place of solace and rest for the Renoir family, even though none of them died in Essoyes, the painter, his wife, and all three of their sons are buried in the village cemetery, a short stroll away from the family home.

This summer’s celebration of Essoyes à la belle époque is the second time the village has presented such an event: the first such reenactment took place in 2017, as part of the “Year of Renoir” activities surrounding the opening of the family home. This year villagers will once again join with members of the Association AGDE Belle Epoque in creating the atmosphere of Essoyes as the Renoir family knew it. According to Alain Cintrat, mayor of Essoyes, “This day will give visitors the chance to discover Essoyes as it was at the beginning of the twentieth century, in the full flowering of the belle époque. Everyone is invited to come and stroll amongst the citizens of Essoyes, many of whom will be dressed in the fashions of the time. They can see demonstrations of the use of the grand-bi, [a turn of the century bicycle], participate in a grape harvest festival circa 1900, picnic in the park of our chateau… It’s a beautiful way to discover the atmosphere that Renoir so loved when he came to stay here in Essoyes during the summers…”

It is possible to do a day trip to Essoyes from Paris, but it’s not a good idea. There is just too much to see and do in this lovely, and somewhat undervisited, part of France. Just an hour and a half away from Paris’s Gare de l’Est, and less than an hour’s drive from Essoyes there is Troyes, with its central quartier of beautifully restored half-timbered medieval architecture, and its rich collection of churches and museums; to the east of Essoyes there is the impressive and very interesting Charles de Gaulle memorial in Colombey-les-deux-Eglises; and there is the abbey at Clairvaux. There is a museum of crystal in Bayel, a museum of cheese in Chaource, and a stunning variety of natural beauty in the mix of field, forest, and vineyard landscapes. There is even a vast lake in the nearby Forêt d’Orient; and, of course, everywhere there is champagne.

And while almost any time of year can be a good time to visit wine cellars in the Côte des Bars, each year during the summer the Route du Champagne en Fête is hosted by a handful of villages. This celebration, which will take place this year July 27-28, will be hosted by six communes in the Vallée d’Arce en Seine (Bar-sur-Seine, Buxières-sur-Arce, Merrey-sur-Arce, Polisot, Polisy, and Ville-sur-Arce).

Essoyes is about 2 1/2 hours away from Paris by automobile, and less than an hour away from Troyes. Trains run frequently to Troyes from Gare de l’Est in Paris, an hour and a half ride; and there are a couple of car rental offices near the train station in Troyes. The closest train station to Essoyes is at Vendeuvre-sur-Barse (one stop beyond Troyes), half an hour away from Essoyes; local taxis can pick visitors up there and take them to Essoyes, but this must be arranged in advance.

Where to stay in Essoyes

There are also several gites and chambres d’hôtes in Essoyes as well as in nearby villages, and of course there are many places to stay in Troyes.