Great Destinations: Normandy for Everyone

Say the word ‘Normandy’ and everyone has their own picture of this lush region of northwestern France. For some it means William the Conqueror and the Bayeux Tapestry. For others the D-Day landing beaches; or Impressionist art – Rouen, Giverny; for others still, the iconic outline of Mont Saint-Michel.

Normandy also personifies the good life: shellfish platters eaten at quayside restaurants; a glass of local cider in a village bar – and as much outdoor fun as you have energy for, from water sports and beach activities to hiking, biking and horse-riding. In fact, it’s easier to say what Normandy doesn’t offer. There are no mountains and, as a northerly region, you can’t guarantee the weather. But whether you’re after a city break or a seaside holiday, a foodie weekend or a cultural stopover, Normandy has the answer.

One of the few regions not to have its boundaries changed by the recent political reshuffle, Normandy is made up of five departments: Seine-Maritime, Calvados and Manche along the Channel coast, with Eure and Orne inland. 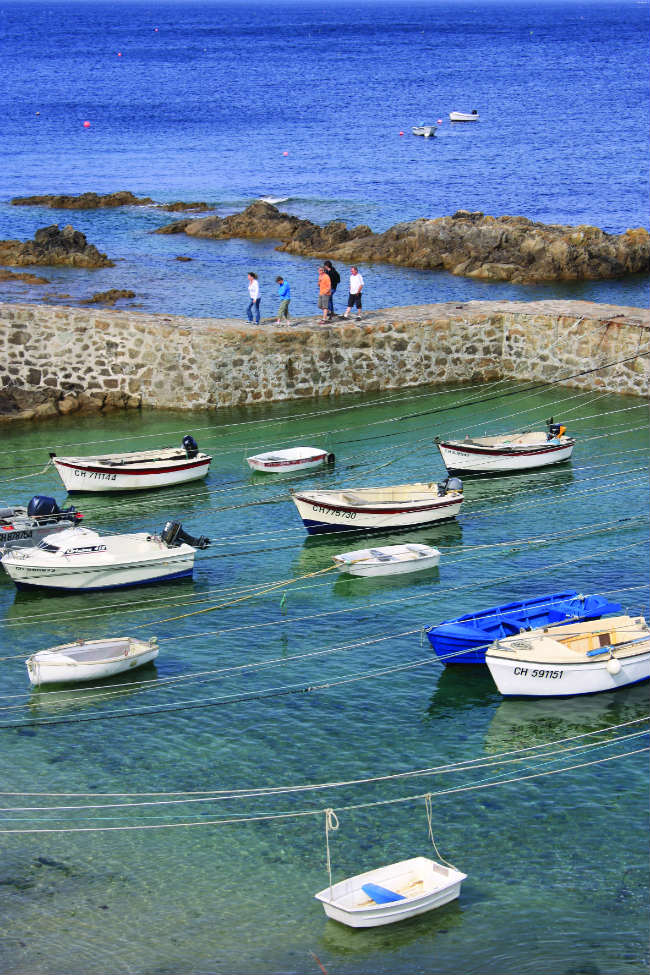 With nearly 1,000 years of shared history, Normandy has long been a favourite holiday destination for British travellers, an easy hop across the Channel with the family car – and even the family dog. But the events of Operation Overlord in June 1944 have meant that American and Canadian visitors also feel an unbreakable bond with the people of Normandy, and they are still welcomed with open arms.

“I walk my dog along Omaha Beach every morning in all weathers,” a local hotelier once told me. “And I never do so without remembering those brave young men who came from the US to fight for our freedom. We owe them so very much.” 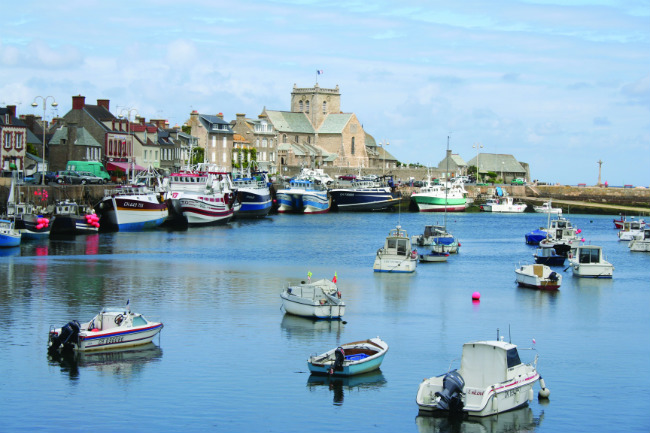 The granite-built town of Barfleur has a history as an important port. Photo: Gillian Thornton

The memory of those young men from across the world is kept alive through monuments, memorials and cemeteries along the coast of Calvados and Manche, where the five landing beaches were codenamed Utah and Omaha, Gold, Juno and Sword. And as the number of veterans decreases with every passing year, so Remembrance tourism grows ever stronger.

It’s impossible not to be moved by the sight of the floating Mulberry harbours at Arromanches; by heroic stories from strategic targets like Pegasus Bridge and the Merville-Franceville battery; but above all by the neat lines of headstones from Sword Beach in the east to Utah in the west. Heroes arrived by the thousand, but far too many never went home.

Whichever Allied nation you belong to, a visit to the D-Day beaches – Jour-J to the French – is often the starting point of a love affair with a region that’s packed with contrasts and iconic French experiences. 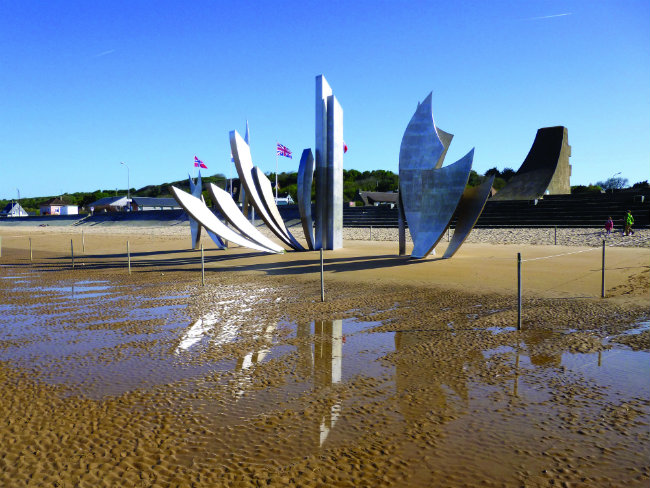 Outside of Paris, Mont Saint-Michel is France’s most popular visitor attraction, hotly contested by the Bretons on whose maritime border it lies (technically, it is just inside Norman waters). Gone is the solid causeway that until recently enabled drivers to park at the foot of the hilltop abbey. A major environmental project has restored the rock to its island status and drivers now park on the mainland, then walk or catch a shuttle bus to the entrance gate. Visit early or late in the day, especially at peak times, if you want to avoid the shuffling queues up the winding main street, but do visit. The lofty abbey cloister is a spiritual experience, whatever your religious beliefs.

The illegitimate son of the Duke of Normandy, William the Bastard made a pretty shrewd career move when he crossed the water to England in 1066 and became William the Conqueror, King of England. Falaise Castle, where he was born, sets the medieval mood perfectly, as do the vast ramparts of his ducal castle, which still dominate the centre of Caen. William died in 1087 after a riding accident, but only his thigh bone now rests in the Men’s Abbey at Caen, after his tomb was ransacked during the 16th-century Wars of Religion. 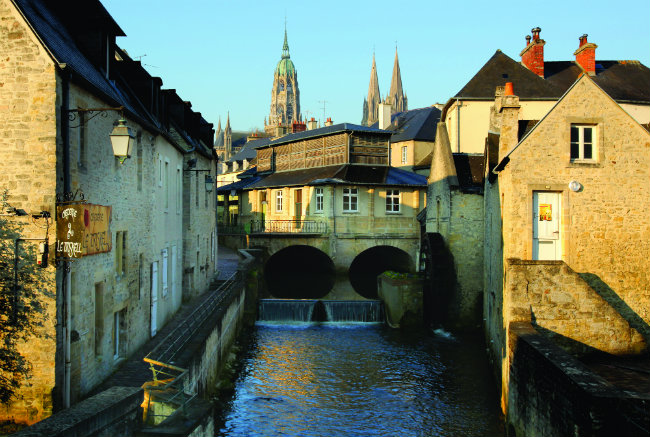 The William triangle of towns is completed by Bayeux, where the tapestry-that-isn’t-actually-a-tapestry tells the story of the Norman Conquest in glorious cartoon-strip style, painstakingly embroidered on linen. Watch out for severed limbs floating around the margins and the spy peeping out from behind a tree, but the detail in every frame is staggering. Don’t miss Notre Dame Cathedral, consecrated in 1077, nor the tranquil cemetery, largest Second World War cemetery of Commonwealth soldiers in France with 4,648 burials. On the edge stands a unique memorial to international journalists killed whilst reporting in the line of duty. 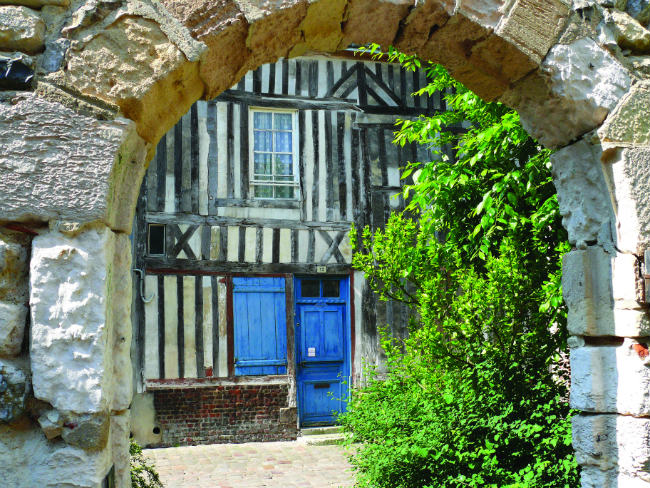 Heritage towns don’t come much more atmospheric than Rouen, which sedately straddles the meanders of the Seine. Wander down streets of half-timbered medieval buildings, explore the towering Gothic cathedral, and see the spot where national hero Joan of Arc breathed her last gasp in 1431. Amongst the city’s latest visitor attractions are the Joan of Arc Museum in the former bishop’s palace, and Panorama XXL, a giant rotunda that gives you a 360-degree view of circular paintings on three levels.

From Rouen, many drivers fast-track westwards along the Seine valley to the pretty little port of Honfleur, but I’d recommend taking the slower route through the Regional Natural Park of the Boucles de Seine. Here the Fruit Route, Abbeys Route, and Thatched Cottage Route blend seamlessly together into one picturesque package along the loops of this liquid thoroughfare. 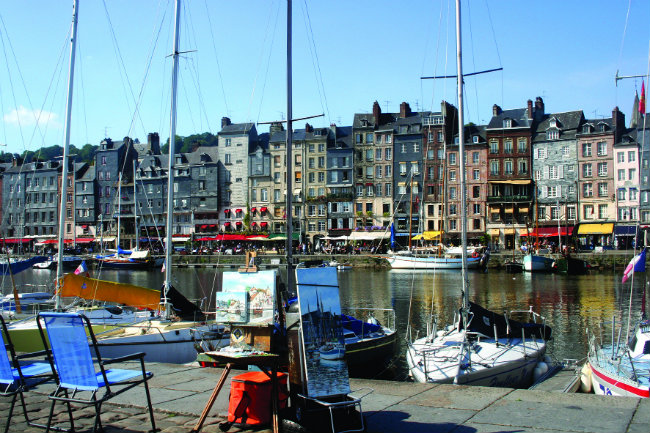 Just beyond the marshland of the Marais-Vernier, the much-photographed Vieux Bassin of Honfleur sits just inside the mouth of the Seine, its slate-fronted buildings towering to seven storeys above the gleaming pleasure boats. The wooden church in the shape of an upturned boat is a must-see, but head away from the quayside too and visit the waterside Jardin des Personnalités, which showcases busts of local heroes such as painter Eugène Boudin, composer Erik Satie and writer Françoise Sagan.

Across the river, the busy port of Le Havre is listed by UNESCO for its post-war architecture  by Auguste Perret. The city celebrates its 500th anniversary in 2017 with a full programme of events that will include contemporary art installations, giant puppets and the final stage of the Tall Ships Race. 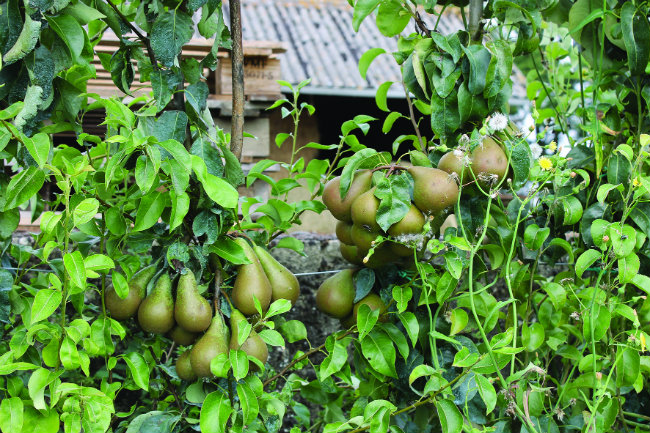 From the high cliffs of the Côte d’Albâtre in the east to the shallow bay of Mont Saint-Michel in the west, Normandy offers a huge variety of coastal scenery. The Impressionist movement unwittingly began in the 1870s with a sunrise painting of Le Havre by Claude Monet, scathingly dubbed ‘an impression’ by a leading art critic, and his followers flocked to Normandy, attracted by its clear light. Today, visitors can still stand where the Impressionists placed their easels, from the chalk cliffs at Étretat to the rugged headlands around Cherbourg, and also in the gentle roll of the glorious Seine valley, to Monet’s world-famous gardens at Giverny.

Summer visitors flock to family-friendly resorts like chic Deauville, Trouville-sur-Mer, Houlgate and Cabourg on the Côte Fleurie, as well as the smaller resorts of the Côte de Nacre west of Caen, rebuilt for a new generation after the destruction of D-Day. If you want to learn a new beach or water sport, or maybe perfect an old one, you’ll find expert tuition for all levels. Or try one of the unassuming seaside spots between Barneville-Carteret and Granville on the west coast of the Cotentin peninsula, south of Cherbourg. But don’t spend all your time looking out to sea: Normandy’s lush interior can be full of surprises. 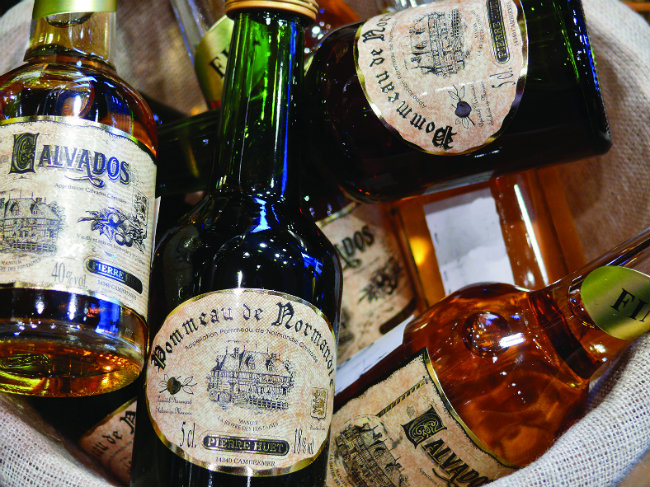 Follow the self-drive Cider Route through the orchards and half-timbered villages of the Pays d’Auge around Cambremer, particularly magical in spring when the trees are in blossom. Then sit down to a pottery bowl of local cider with a sweet or savoury crêpe – Normandy’s answer to fast food. Further south, near Vimoutiers, stop in Camembert to hear how a secret recipe became an international favourite. 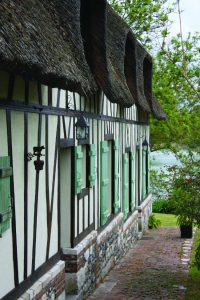 Many visitors rush south from Cherbourg without exploring the wetlands of the Marais du Cotentin et du Bessin. Walt Disney’s ancestors left Isigny-sur-Mer, on the edge of the marshland, with William the Conqueror, eventually finding their way, via Ireland, to the USA.

And on the southern fringes of the region, the adjacent Regional Natural Parks of Normandie-Maine and the Perche offer tranquil hiking and biking trails. Don’t miss the enchanting village of Saint-Céneri-le-Gérei, one of five Normandy villages classified amongst The Most Beautiful Villages of France. Nestled in a loop of the Sarthe, its old stone houses are clustered round a remarkable Romanesque church. 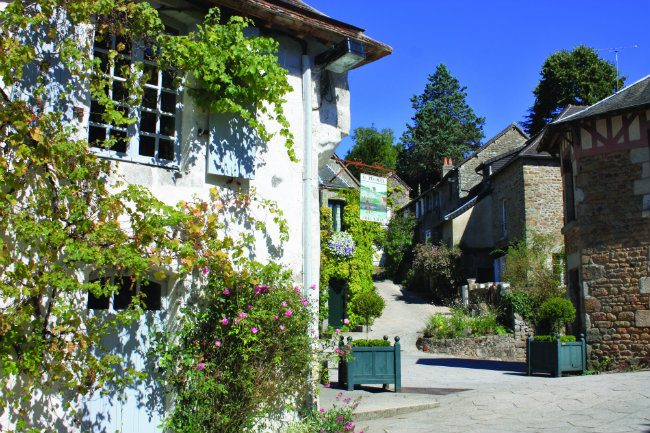 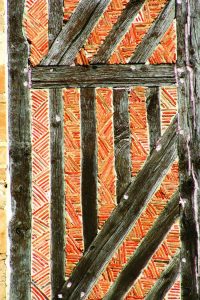 For a real capsule of the region, take a driving tour of all five of these elite Plus Beaux Villages de France. Founded beside a Benedictine monastery, Le Bec-Hellouin, between Lisieux and Rouen, is lined with timber-frame houses typical of the area, as is the picture-postcard community of Beuvron-en-Auge on the Cider Route of the Pays d’Auge.

East of Rouen, Lyons-la-Forêt bustles with small shops and hostelries clustered round a covered market in the heart of a beech forest. But at Barfleur on the Manche coast, granite replaces wood in a pretty fishing village that was an important Anglo-Norman port in the Middle Ages. So, even if you do not have an easel and paintbrush to hand, at least make sure the camera battery is full-charged – there’s a Kodak moment round every Norman corner! 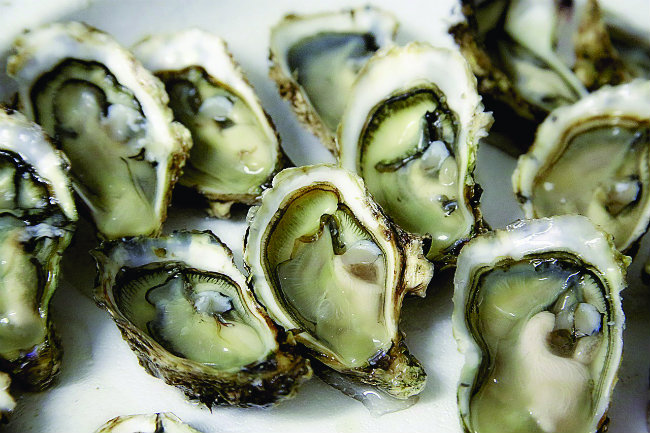 Normandy’s speciality produce represents the best of land and sea with a huge variety of fresh fish and shellfish complemented by dairy products, fruit-based drinks, and tender salt marsh – or pré salé – lamb. Be inspired by the region’s new foodie blog normandyfoodie.wordpress.com

Seafood: Grey shrimps from Granville and oysters from Saint-Vaast-la-Hougue; herring from Dieppe and scallops from Port-en-Bessin-Huppain – Normandy’s rich waters provide all the ingredients for a perfect seafood platter or fish supper.

Apples and Pears: Apple tart and many other desserts are inspired by local orchards, but so too are the region’s signature tipples. Visit producers in the Pays d’Auge to try apple juice and cider, Pommeau apéritif and the rich golden taste of Calvados, and look out for pear juice too and sparkling perry. 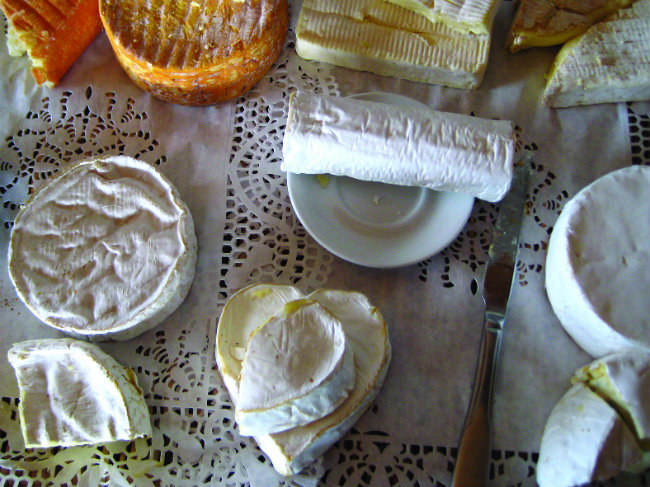 Cheese: Camembert is Normandy’s most famous cheese (except perhaps Boursin). Visit Camembert village near Vimoutiers for the full story. But be sure to try Pavé d’Auge, Neufchâtel, Pont-l’Évêque and Livarot too.

Black Pudding: Not to everyone’s taste, but Mortagne in the Perche is the home of authentic boudin, or blood sausage, made from pork blood, pork fat and slow-cooked onions. Local butchers also produce flavoured varieties such as smoked Camembert or apple and calvados.

Teurgoule: Rice pudding, Normandy style, is an ultra creamy variety made with rich local milk, flavoured with cinnamon, and slow-baked for a thick caramelised top. A real family favourite that’s to be found on many restaurant menus.

Related articles: Top Things to See and Do in Normandy
Where to Stay and Eat in Normandy
Top 12 Iconic Sites of Normandy 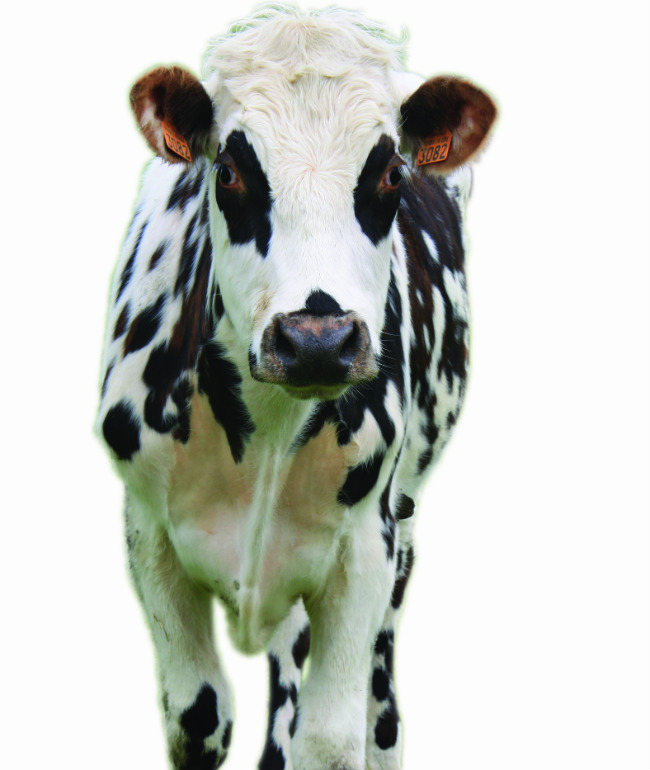