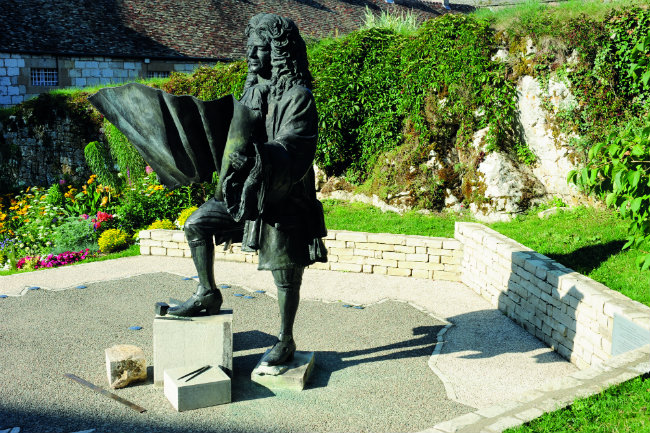 Ten years since the legacy of France’s greatest military engineer was recognised by UNESCO, Sue Smith travels to Bourgogne-Franche-Comté to see the mark Vauban left on his homeland

“Burgundy?” said my friends, eyes wide like saucers, when I announced where I was going. “All that lovely wine,” they continued, with just a tinge of jealousy.

There was wine, of course, and it was truly lovely. But for once I wasn’t in France just for a gastro indulgence, but to follow in the footsteps of the military genius Vauban, ten years after his mighty fortifications clinched UNESCO World Heritage status.

If ever there was a personality from the history of France known outside her borders (who was neither a king nor an emperor) it is Sébastien Le Prestre de Vauban. A military engineer to King Louis XIV, he was responsible for fortifications all along the borders of the country, including in his home region. 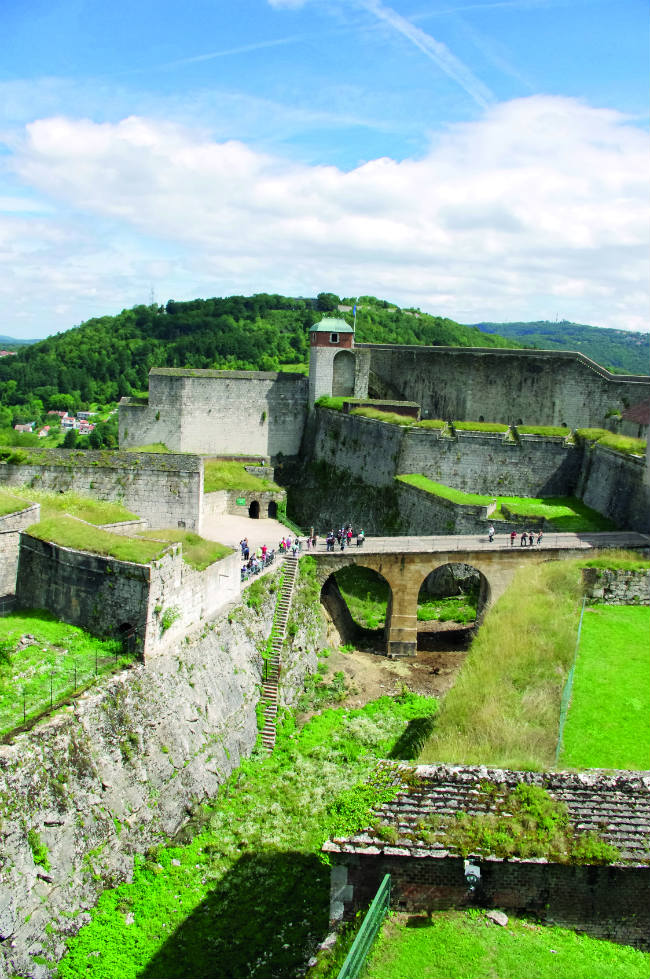 View of the Citadel of Besançon, built by Vauban. Photo: Fotolia

A visionary way ahead of his time, Vauban was a humanist, philosopher, soldier, politician and architect – and he was adored by his king. An uncontested master of the strategy of sieges, his parallel trenches linked by other zigzag communication trenches ensured his battles were quick and efficient.

“Burn more powder and shed less blood,” was his mantra. He was an honest man of his century, serving the monarch with a passion, for which he was handsomely rewarded.

So swift was his success in taking the town at the siege of Maastricht in 1672 that he received 80,000 livres from the king and was able to buy back his family home, the 12th-century Château de Bazoches, which is where our journey through Burgundy and the Franche-Comté region began. 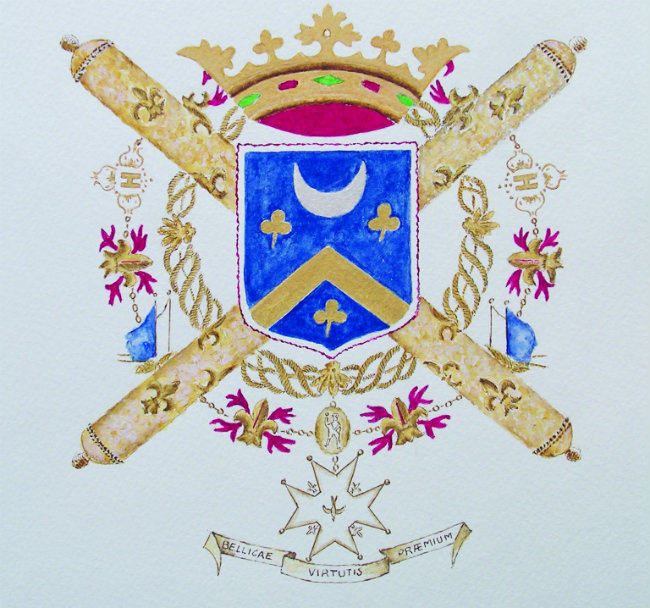 Vauban’s great-grandfather was the former owner of the château and his grandmother would have inherited it had it not been for ruinous legal proceedings that deprived her of her inheritance. Two generations later, in 1675, Vauban was in a position to make sure the family name was once again reinstated at Bazoches.

Unfortunately, his beautiful family château with its four towers and trapezoid architecture on the northern boundary of Vauban’s native Morvan did not make it onto the UNESCO World Heritage list, much to the consternation of the current owners.

In 800 years, the estate has had 40 owners belonging to 20 different families. However, there are two family names that intertwine often throughout the family tree and have now come full circle to join at the end. The present owners, Hélène (née de Vibraye) and Arnaud de Sigalas each descend 27 generations down the line from Jean de Bazoches, the man who built the château. Perched halfway up a wooded hill, on the site of a Roman fort and overlooking Vézelay and a seemingly infinite landscape of undulating countryside, Bazoches was Vauban’s refuge whenever Louis XIV allowed him a rare holiday. 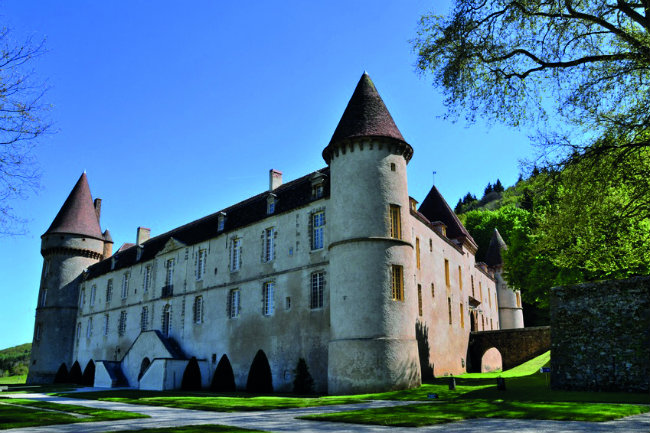 Vauban made the château a military garrison where he housed his engineers, and countless maps and projects for fortified squares were drawn up here. The pile gave him inspiration to write his books, mainly on forestry, the selective breeding of pigs and monetary policy and colonisation, as well as the explosive La Dîme royale (The Royal Tithe), protesting against the unequal taxation at the time, when exemptions were given to the upper classes.

The book, published two weeks before his death, without royal permission, was condemned by the government and Vauban spent the last days of his life trying to collect every copy he had given to friends. His descendants opened the château to the public more than 20 years ago and a copy of La Dîme royale can be found in the library. 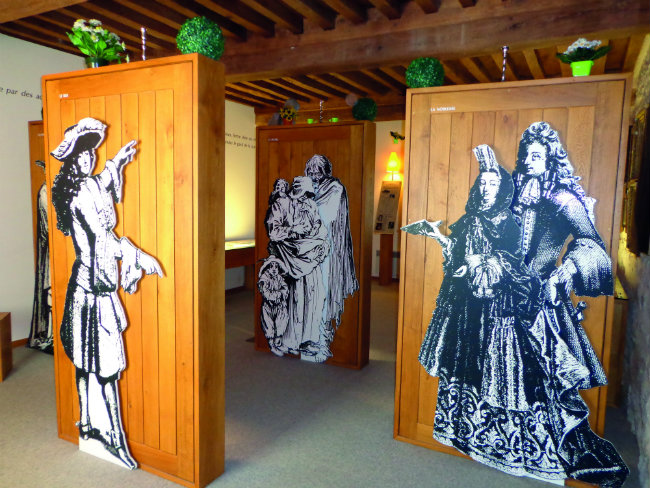 Courtesy of the Vauban Museum at Saint-Léger-Vauban

Just a 30-minute drive away we got our first taste of some of Burgundy’s magnificent wines at the Auberge de l’Atre at Quarré-les-Tombes. Anyone looking to stay in the Morvan would be hard-pressed to find a nicer place to lay their head for the night. Run by chef-patron Francis Salamolard and his wife, Odile, it has all the charm and warmth one would expect from a small, family-run French hotel.

After an exquisite five-course dinner showcasing a selection of mushrooms from the region and some sensational wines from Francis’s extensive cellar, including a mind-blowing 25-year-old Chablis, we were well set-up for the drive to Auxonne the following day.

However, we could not leave the Morvan without swinging by the house where Vauban was born, at Saint-Léger-de-Foucheret (the name of the village has since been changed in his honour to Saint-Léger-Vauban). The modest three-room building, now a museum dedicated to his military works, is a reminder of Vauban’s humble childhood. Though he was born to minor nobility, the family fell on hard times and he lived among the peasants before being taken in by nuns after he was orphaned aged 10. 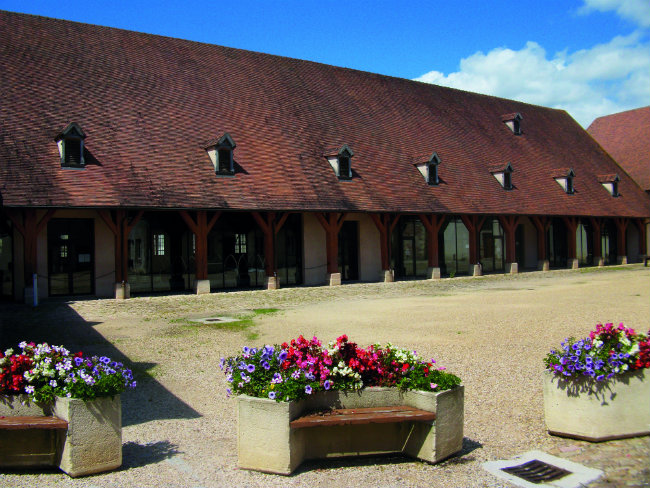 Vauban’s arsenal at Auxonne, which is now used as a market place. Photo: CRT BOURGOGNE-FRANCHE-COMTÉ

Auxonne, with its pretty square on the River Saône, is a fortified town on the border between Burgundy and Franche-Comté, fortified since the Middle Ages. This is where Napoleon went to military school. When Vauban overhauled the bastions of Auxonne, he preserved the beautiful Porte de Comté and created the Porte Royale. It was here that he built the arsenal that was used for the construction of canon stands, and there is still a military presence in the town – though these days you are more likely to find fruit and vegetables at Vauban’s arsenal as it now serves as a market place.

An hour away from Auxonne, Besançon, with its rich history of watch-making, created a diversion from fortifications with a visit to the Musée du Temps, where there is everything from sundials to clocks and hour-glasses as well as its pièce de résistance, the Leroy 01, one of the world’s most complicated watches, made of 1,000 pieces with six layers of gears. The watch was designed and made in Besançon and, after being presented at the World Fair in Paris in 1900, sold for 20,000 francs to a Portuguese buyer. 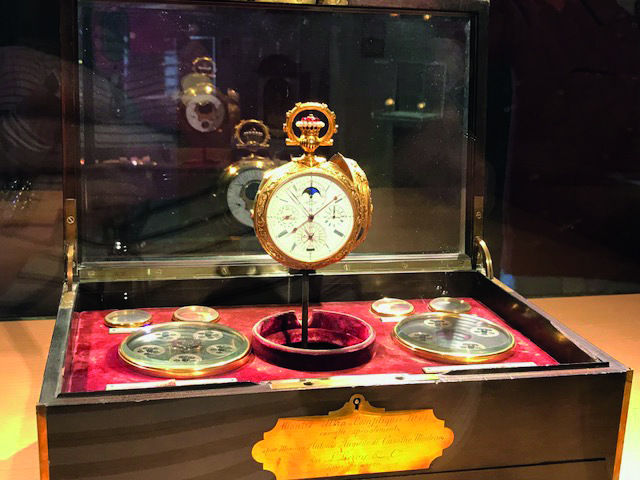 The Leroy 01, one of the most complicated watches made of 1,000 pieces with six layers of gears

A leisurely walk downhill for dinner at L’Ô à La Bouche offered views of this ‘town of art and history’ with its Spanish Renaissance buildings sitting comfortably beside classical stone. Chicken cassoulet and chicken in coconut were just some of the dishes polished off by our group, who were all eager by then for that steep walk to the Citadel to burn off some calories the following day. The Citadel at Besançon is one of Vauban’s masterpieces – a stunning example of 17th-century military architecture spread over 12 hectares and considered to be one of the most beautiful fortresses in France. Our stay that night at the Hôtel Le Sauvage, a former convent with unbeatable views of the ramparts and Doubs valley, gave us a welcome eyeful of what was to come.

The next morning, we set off uphill and our guide suggested walking backwards, which, bizarrely, seemed to make the whole process less painful. 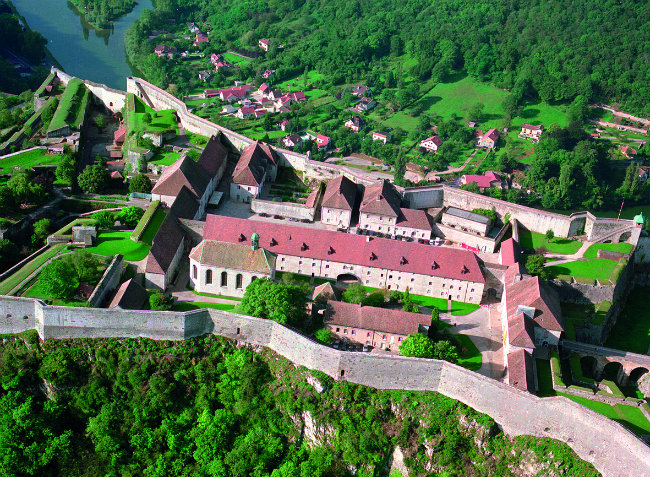 The Citadel of Besançon hangs more than 100 metres above the old town of the capital of Franche-Comté and offers some spectacular views from the top. Fortunately, after all that climbing, there is also a decent restaurant where you can soak up the sun and grab some sustenance before the walk back down. 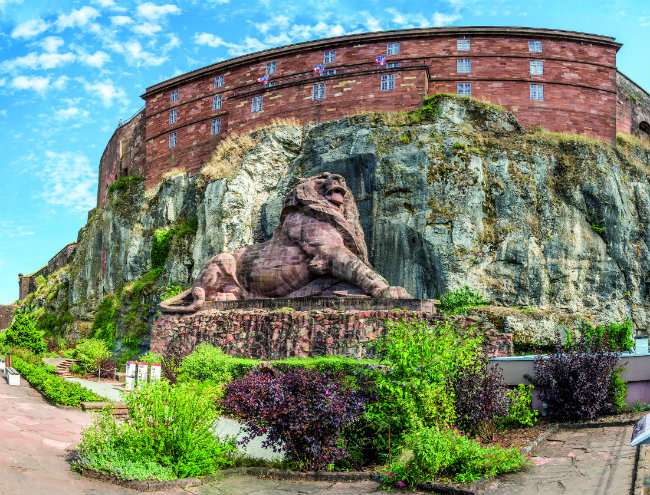 With our trip coming to an end we headed for the town of Belfort, which sits on a plateau between the Jura and Vosges mountains. French kings did their best to fortify it as it was the only feasible route to the north and the south for hundreds of kilometres.

It was Vauban who built a second wall around the city, which, despite being more than a century old in 1815, managed to withstand a siege. But the spirit of Belfort is really summed up in the monumental lion made from sandstone in the face of a cliff overlooking the city. Made in 1880 by Frédéric Bartholdi, the man who designed New York’s Statue of Liberty, the Lion of Belfort commemorates the Franco-Prussian War. 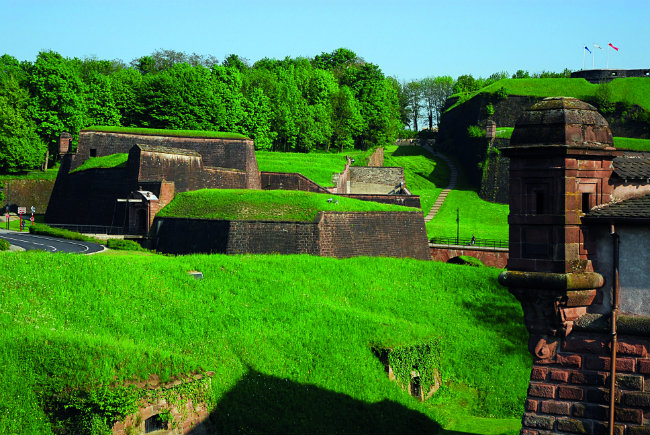 In town there are another 150 smaller, stone lions that appear as statues, murals, fountains and door-knockers. The tourist office provides guided tours in summer, or you can pick up a trail map and go alone.

Our accommodation for the night was the Grand Hôtel du Tonneau d’Or, which made us gasp with its stately grandeur as we walked in the foyer. The sweeping staircase is even listed as a Monument Historique. No trip to Belfort would be complete without paying a visit to the beautiful Neoclassical cathedral in the square, with its great organ in the gallery – an historic monument in its own right. 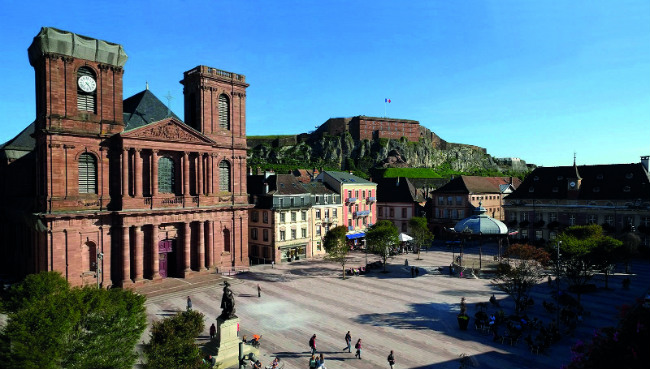 By now, we had learned so much about the impressive Vauban it was high time for a little light relief. So we headed to La Clé du Bastion, which offers the latest trend in group activities: an escape game.

Obviously Vauban was going to play a part. Locked in a room we were transported back to the 1700s to try to retrieve his fortification drawings, which had been well hidden to avoid them falling into enemy hands. Working as a team, we unravelled clues which led us to keys that unlocked doors and drawers, all the while trying to beat the clock in a 60-minute time frame.

A farewell dinner at Le Pot au Feu – an eatery set in a stone cellar serving such delicacies as iced soup in a Kilner jar not to mention its namesake stew – left us satisfied we had seen Bourgogne-Franche-Comté at its nest, and learned a great deal about one of its favourite sons along the way. 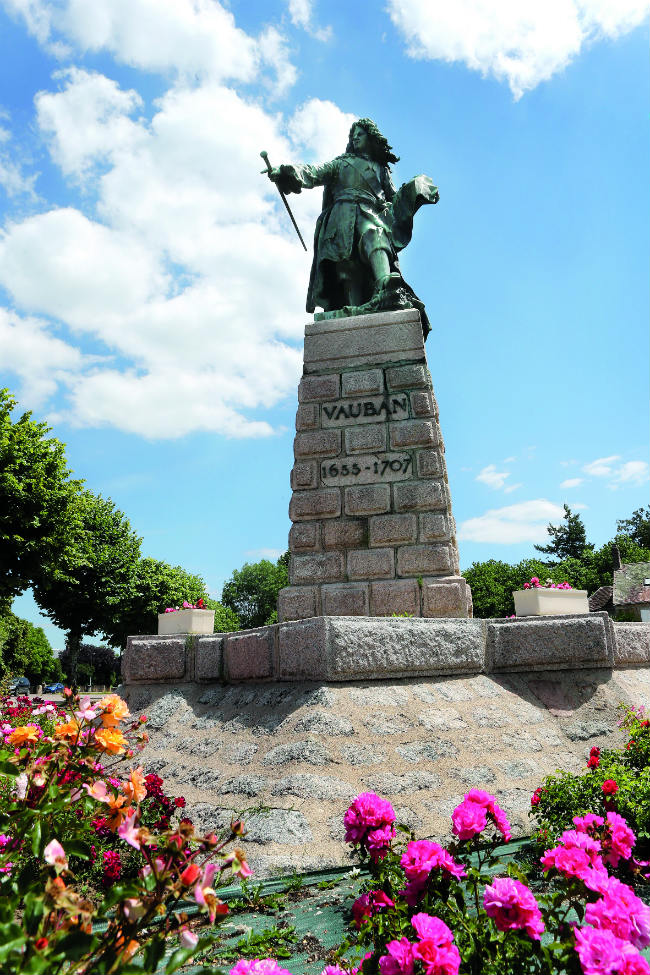 Statue of Vauban at Saint- Léger-Vauban, the town where he was born

Previous Article Book Reviews: Le Selfie Gascon by Perry Taylor
Next Article What to See and Do in Champagne & Ardenne