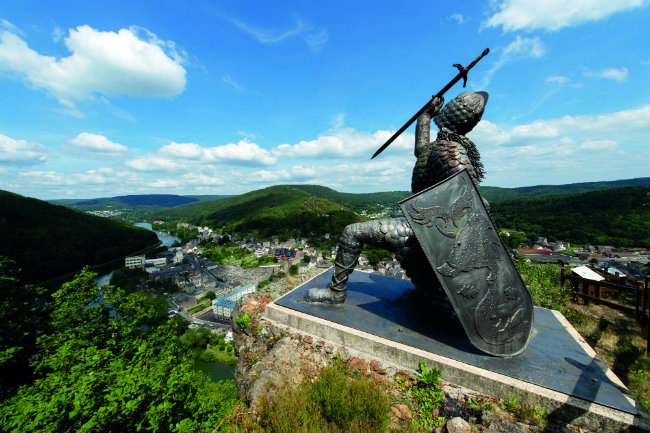 For many Francophiles, the historical province of Champagne has long been associated with the neighbouring département of Ardennes, nestled up against the Belgian border. These days the old region of Champagne-Ardenne (now Champagne & Ardenne) is part of a bigger partnership, joined to Alsace-Lorraine to make the new super-region of Grand-Est. But the two areas still fit very neatly together as a holiday destination in their own right, the wooded massif of Ardennes contrasting with the plains and vineyards of Champagne. 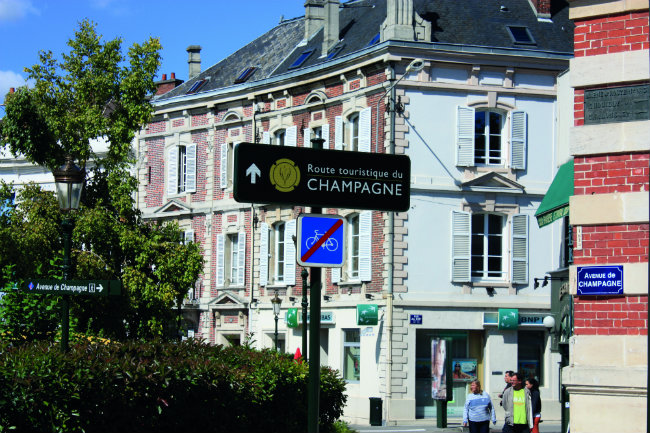 Take the motorway from Calais and in less than three hours you can be in stylish Reims for a city break that combines champagne, cuisine and culture. Visit the soaring cathedral which saw the coronation of 33 French kings and take a tour of top-notch cellars like Mumm and Veuve Clicquot.

I have a soft spot for Troyes, too, a few motorway junctions further on. Not just for its wealth of stunning half-timbered properties and art museums, but also for its retail temptations. A textile town through the ages, 21st-century Troyes is the capital of bargain shopping.

This spring, however, I decided to take ‘the one less travelled by’, in the words of American poet Robert Frost – a gentle journey south from Ardennes to where Champagne brushes up against Burgundy, but bypassing big towns. This is easy to achieve: simply pick up the leaflet to the Route Touristique du Champagne and just drive through vineyards and villages where life is governed by the grape. 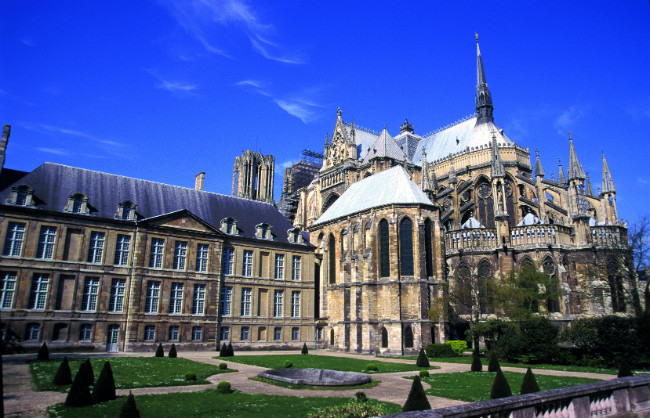 From Reims, it’s barely 30 minutes by car to Épernay and the vineyards of the Marne Valley, one of several designated areas for the production of AOC champagne. Lined as it is with imposing mansions and names that read like a top international wine list (Mercier, Moët & Chandon, Perrier-Jouët…) if there is any street paved with gold, it has to be Épernay’s avenue du Champagne. Not for nothing is this elegant small town dubbed the Capital of Champagne. 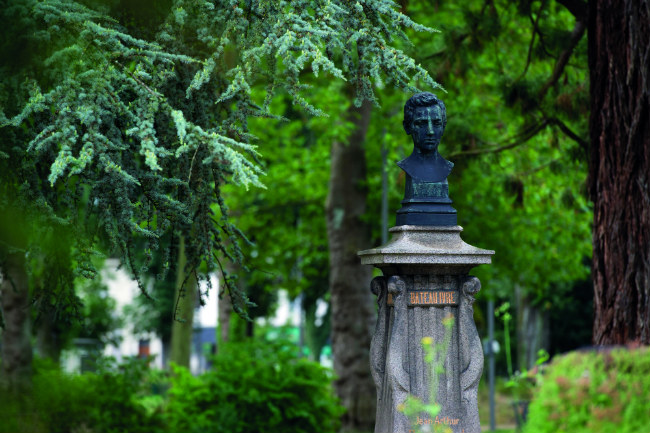 A final ‘s’ is what distinguishes the French département of Ardennes from the wooded massif which stretches into Belgium and Luxembourg. For many years, this was an area of heavy industry, the meandering Meuse resonating to the sound of steel works and blast furnaces. Today it’s a haven for anyone who loves walking and cycling, canoeing, kayaking and all manner of nature activities.

Whether you walk or arrive by car, don’t miss the hilltop view over Monthermé, where the Meuse has carved out a perfect horseshoe between densely wooded hills. And I can also recommend the heavily fortified town of Rocroi where ten streets radiate out in a starburst from the central square.

Ardennes’ main town is Charleville-Mézières, well worth a visit for the place Ducale, which is modelled on the place des Vosges in Paris. Discover some of the town’s key sites by following the trail of ‘rebel poet’ Arthur Rimbaud, who was born here in 1854. 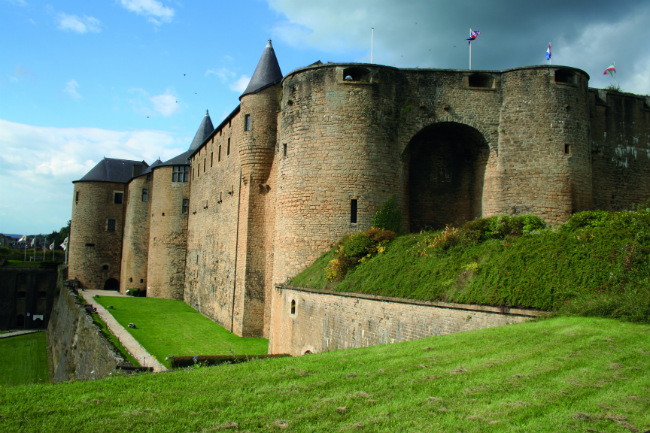 And visit nearby Sedan, a pleasant town with some stylish period buildings dominated by Europe’s largest fortress. Below these walls, Napoleon III was defeated in the short-lived Franco-Prussian War of 1870 and the Second Empire came grinding to a dramatic halt. Today, you can tour the turrets and tunnels with an audioguide and – my favourite – sleep in comfort within the castle walls at the atmospheric Hôtel Le Château Fort, originally used for stores. 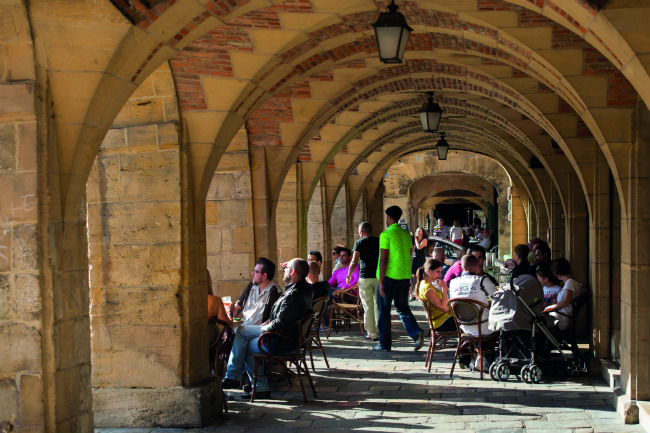 Café terrace beneath the arcades at Charleville-Mézières. Photo: D Truillard

Heading south, I slipped seamlessly into Marne, the most northerly of Champagne’s three départements. Reims and Épernay may be the best-known towns here, but centrally placed Châlons-en-Champagne – renamed from Châlons-sur-Marne – holds the accolade of administrative centre.

Splashed with attractive parks like Le Petit Jard and Le Grand Jard, it’s a surprisingly pleasant spot to while away a few hours. Visit the early-Gothic gem of Notre-Dame-en-Vaux and take a canal cruise beneath historic buildings and through tunnels illuminated with sound and light shows. And for my first fizz fix of the trip, I dropped into the town’s only champagne house, Joseph Perrier. Established in 1825, this fifth-generation family business was an appointed supplier to Queen Victoria and King Edward VII.

Continuing south along the Marne Valley in search of more sparkle, I arrived in the Coteaux Vitryats, the smallest of the champagne areas. Vines here were lost in the phylloxera epidemic of the late 19th century and only replanted in the 1970s. Now a 60-kilometre self-drive tourist loop winds through 15 villages around Vitry-le-François and includes Bassuet, where I stopped at Champagne Bernard Lonclas.

If you want to visit small producers for tastings, it’s wise to phone ahead, but Bernard Lonclas conveniently opens every day except Sunday and Guillaume, my guide, provided a fascinating insight into the modern champagne industry. Vintage champagnes, I discovered, are still turned – or ‘riddled’ – here by hand each day, but non-vintage bottles are now turned automatically every two hours, a whole pallet at a time. Progress indeed! And with Brut starting at under €15 a bottle, it would have been madness not to buy. 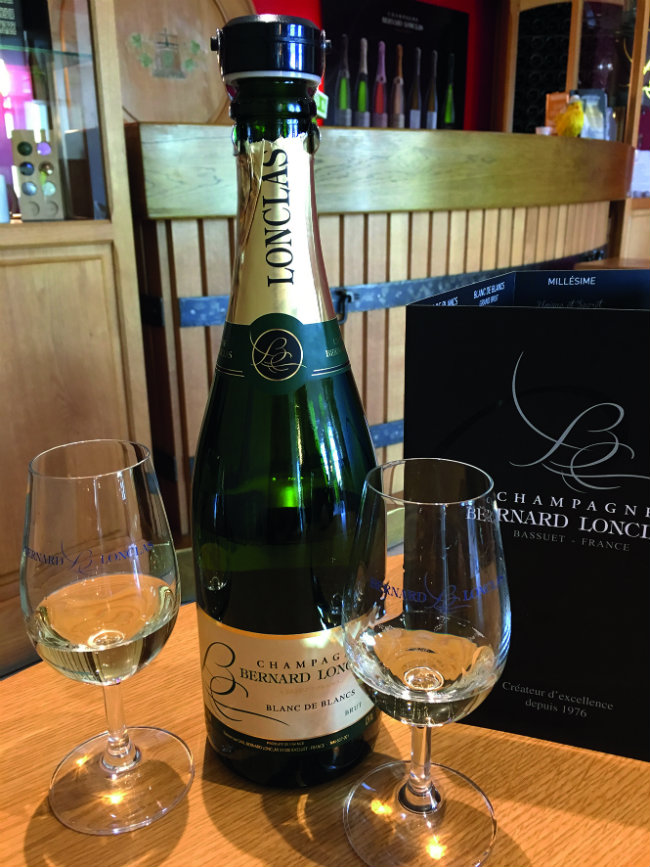 The car boot filling nicely, I made the short drive to Lac du Der-Chantecoq, the largest man-made lake in Europe. Designed to regulate the flood waters of the Marne, it was opened in 1974 after ten years of work and is now a centre for water sports, fishing, and relaxation, not to mention birds. There are many resident and visiting species, but the lake is famous for the migratory cranes who pass through in great numbers from October to March. The Tourist Office in Giffaumont-Champaubert on the southern shore of the lake is the gateway to this delightful area which also includes a unique collection of picturesque villages with half-timbered churches, many of them adorned with stained-glass windows from the 16th century School of Troyes. 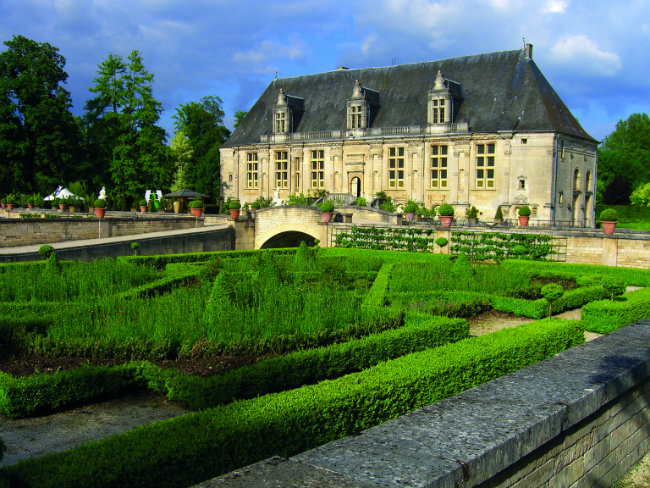 Heading southeast, I stopped off at Joinville, a historic small town in Haute-Marne. Bisected by both the Marne river and a quiet canal, its main claim to fame is the 16th-century Château du Grand Jardin. Commissioned by Claude de Lorraine, first Duke of Guise, as an entertainment venue, this ornate party palace has been beautifully restored and is surrounded by a formal French garden and ‘natural’ English park. There is a British connection too. Claude’s eldest daughter married Scotland’s King James V, and their daughter Mary was to become Queen of Scots on her father’s death in 1542, just six days after her birth.

I had heard about entertaining of a different sort not far away from here, at Colombey-les-Deux-Églises, a quiet village in Haute-Marne that was once home to France’s greatest military hero, General Charles de Gaulle. In 1934, he bought a family home here, La Boisserie, primarily as a place of calm for his disabled daughter Anne. 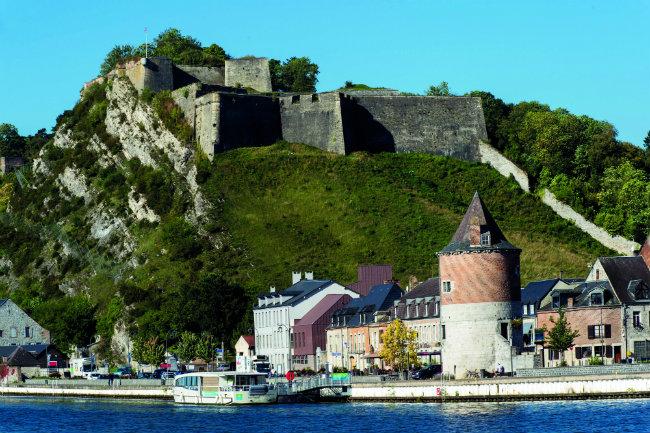 Givet, where the Meuse flows into Belgium. Photo: D Truillard

This was very much a private residence, but in 1958 De Gaulle welcomed Chancellor Konrad Adenauer for the start of a reconciliation that was finalised in 1962 in Reims Cathedral. Today La Boisserie is still a family home, with three ground-floor rooms open to the public. Here my guide brought the great man vividly to life, showing us presents from high-profile personal friends, and De Gaulle’s study in a hexagonal tower with views to the Côte des Bar vineyards.

Across the valley, the hillside is topped by a giant Cross of Lorraine, and beneath it stands the excellent Memorial, a comprehensive museum dedicated to De Gaulle’s life, times and achievements. Interactive, informative and engaging, it merits a couple of hours of anyone’s time, the visit finishing with a lift ride to the foot of that giant cross. 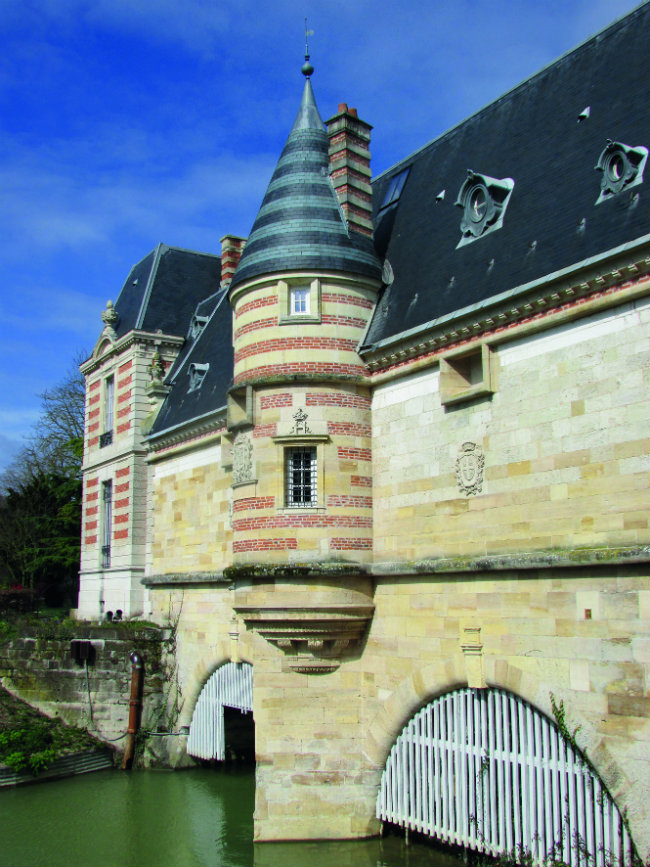 Head south and the road leads through rolling farmland to Clairvaux, once a large Cistercian abbey set in a quiet valley in the Aube département. Today, only the magnificent lay brothers’ building remains, painstakingly restored. But this is much more than just another religious monument. After the Revolution, the size and location of Clairvaux attracted the attention of Napoleon, who redeployed the major monastic buildings as a prison – part of them remained in this use right up until 1970. Major restoration has taken place since my last visit 15 years ago but a huge amount remains to be done, which all makes for a fascinating guided visit. But be prepared to hand in your passport, turn off your mobile phone, and put away your camera. There’s still a modern prison next door! 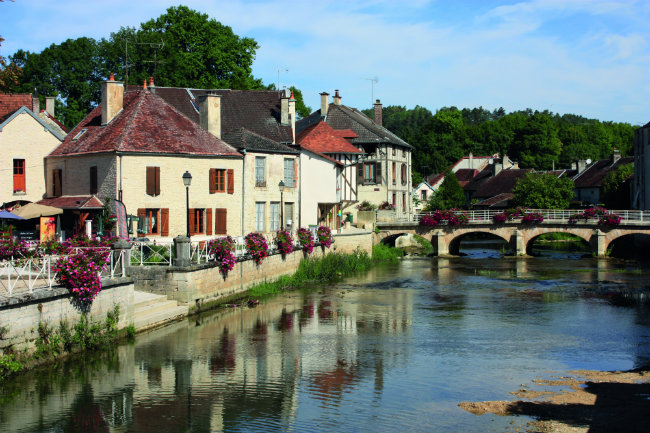 The medieval monks set up farms around Clairvaux, each with a specific purpose, and at Colombé-le-Sec I stopped to see where they made and stored wine. These days, it’s the home of Champagne Monial, launched in 2009 on a fourth-generation family farm. Pop into the monks’ vaulted cellars and chapel before stepping inside the tasting room and – in my case – loading a few more bottles into the boot, in honour of those hardworking Cistercian farmers. 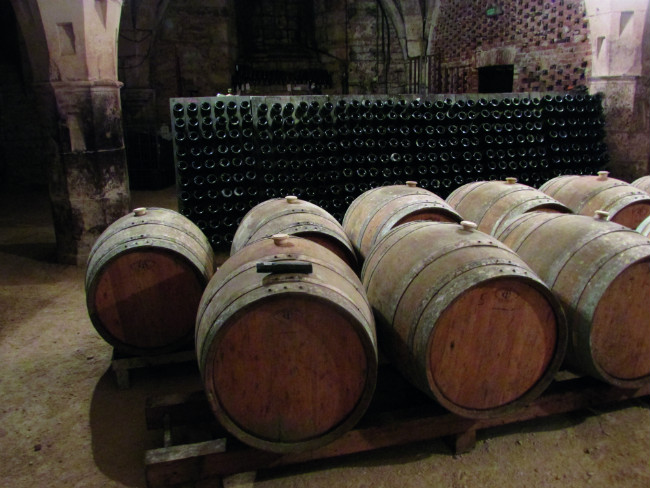 There was just enough space amongst the luggage to warrant another champagne stop at one of my favourite producers, Guy de Forez, in Ricey Bas, one of three hamlets making up Les Riceys in the Côte des Bar vineyards. This is the only village to produce three AOC wines – champagne, white, and, in a good year, the coveted Rosé des Riceys – and a small shop on the square showcases various local winemakers.

Renoir lived out his last years nearby at Essoyes, where admirers can visit his family home and studio, explore the discovery centre on the village square and follow in the artist’s footsteps on four signposted trails. From here, it’s easy to turn north back to Troyes and the three Great Lakes of the Forêt d’Orient, or perhaps take a tour of Épernay and Reims. Whichever you choose, a sparkling road trip is guaranteed.

A TASTE OF THE REGION

CHAMPAGNE: Listed by UNESCO in 2015, the ‘Champagne hillsides, houses and cellars’ include 300 champagne houses and 320 towns and villages in the Champagne AOC area, all linked by five self-drive itineraries marked Route Touristique du Champagne. For more details see www.tourisme-en-champagne.com and www.aube-champagne.com

ARDENNES BEER: Brewing began in Ardennes in the 15th century and by the late 19th century the département boasted 227 breweries and family-brewing businesses. After a post-war decline, there has been a strong revival of quality local beers such as Ardwen, based at Launois-sur-Vence (www.ardwen.fr). Look for their wild boar logo.

PORK DISHES: The dense forests of Ardennes are rich in game, and wild boar have become the symbol of the region. Watch out for Woinic, a giant boar statue beside the motorway between Reims and Charleville-Mézières. Pork-based specialities from Ardennes include boudin blanc from Rethel; cured ham; and chunky Ardennes pâté. In Champagne, try – if you dare – the powerful andouillette de Troyes, made from pork chitterlings.

CHEESE FROM CHAMPAGNE: Two AOC products grace quality cheeseboards across France. Chaource is a soft cow’s-milk cheese with a rind of fine white mould and a subtle flavour, named after a village near Troyes. Also from cow’s milk, Langres gives off a pungent odour but has a mild taste, the salt-washed rind ranging from pale yellow to brown.

SWEET SPECIALITIES: Reims’s famous biscuits roses are crisp finger biscuits often used in dessert recipes. Visit the Fossier Biscuit Company for the real deal (fossier.fr). Reims is also famous for its spiced bread, flavoured with honey and spices, and made from rye flour, instead of the wheat our version from neighbouring Burgundy. 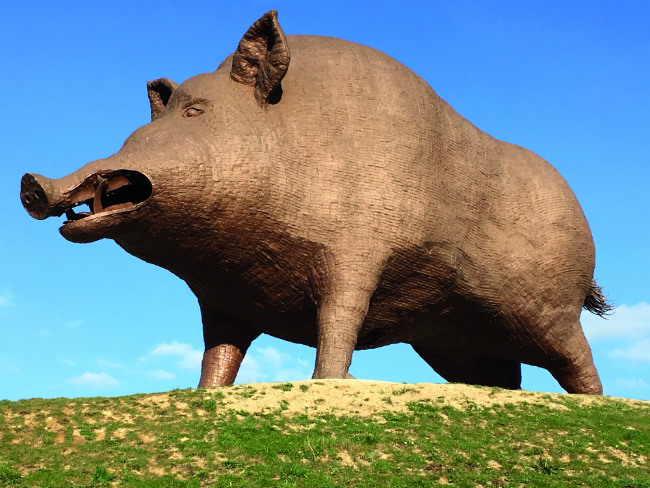