Dispatch from Normandy: Honouring D-Day Veterans on the 75th anniversary 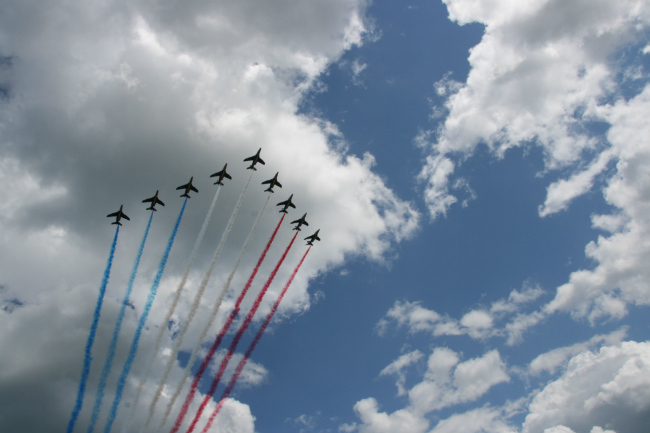 “They died for us. We can’t forget them.”

The words of a young French girl who attended the 75th anniversary of D-Day ceremonies at the American Cemetery at Colleville-sur-Mer, France on June 6th, 2019 express well the feelings of the people of Normandy about the returning veterans. 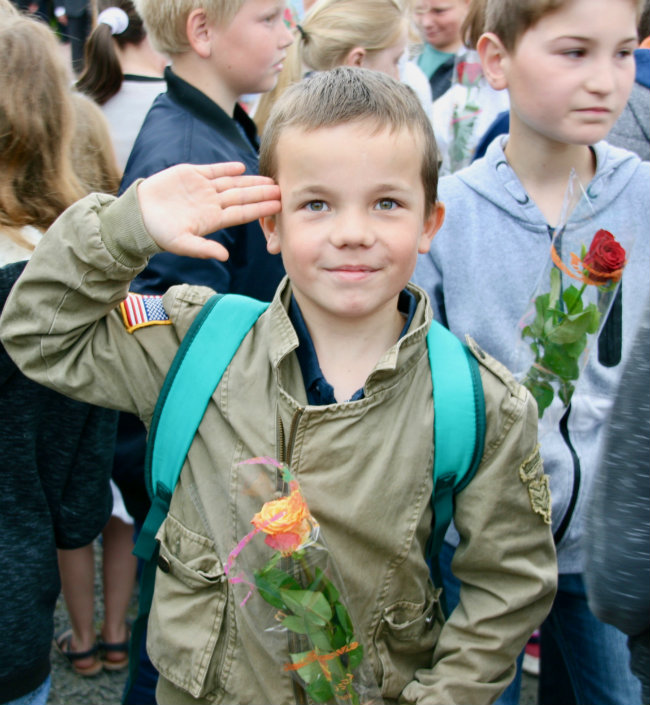 The soldiers who came back for the 75th anniversary are now in their nineties, most walk with walkers or canes and many are pushed in wheel chairs. But their spirits are still strong and courageous and the people of Normandy welcome, love and celebrate them.

They know that the seventy-five years of freedom France and Europe have enjoyed began when these same soldiers risked their young lives to land on the shores of Normandy. 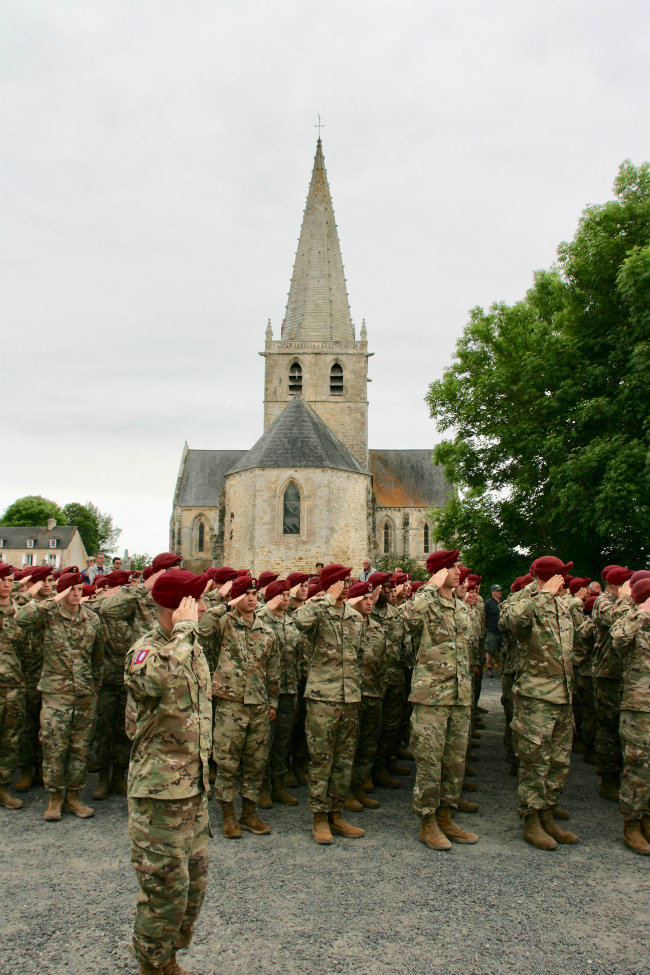 I have had the honour of spending time this past week with many of the returning veterans, for the 75th anniversary of D-Day in Normandy. I’ve watched French children hug them and shake their hands. The young American Army soldiers who are here to take part in the ceremonies honour them and listen to them. People want to pose with them for photographs and ask for autographs. They are in their glory and everyone wants them to have it.

As I’ve sat with the veterans, I lean in close and listen as they tell me their stories. This is a generation of men who were raised to not cry and show emotion. 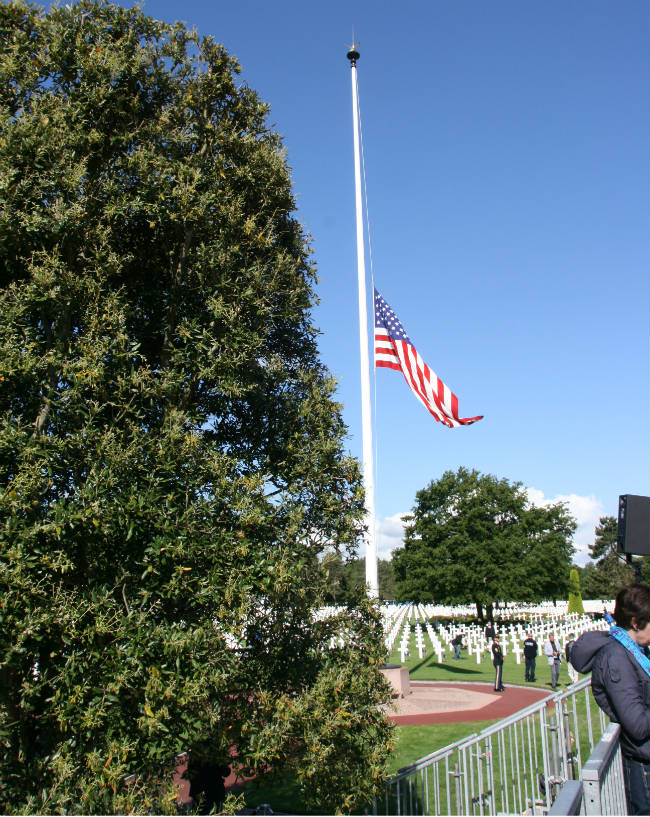 The flag flies at half-mast at the American Cemetery on June 6th. Photo: Diane Covington-Carter

But now, as they talk about what they experienced in the war, it is as if it was yesterday. Their eyes fill with tears as they remember losing friends, then shine with the good memories, of surviving and of strength in the face of true adversity. I hold their hands and we share a few deep and heartfelt moments.

Here are a few of the stories I have heard from those who have made the long journey back to Normandy this last time, to remember. 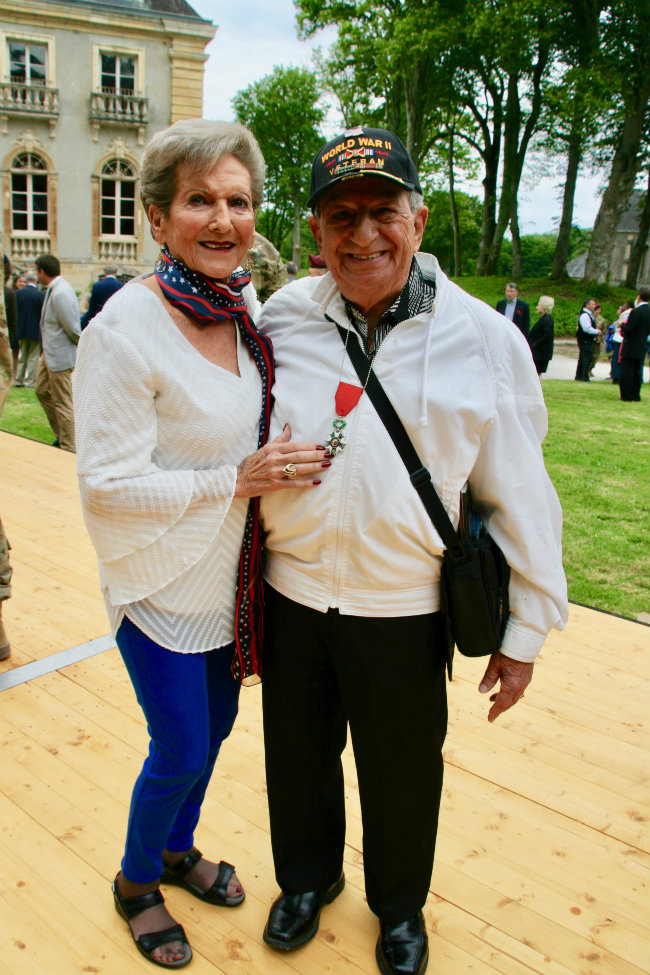 Staff Sargent Irving Locher, age 94, landed on Utah Beach on D-Day, then fought in the Battle of the Bulge and all the way to Berlin. When asked how it is to be back in Normandy, he doesn’t hesitate.

“It’s marvelous,” he said. Locher attributes his survival to being short. He demonstrated by grabbing a tall young soldier and standing behind him, promptly disappearing.

“See what I mean?” he said, then smiled. His wife of seventy years, Bernice, travelled with him and was thrilled with it all.

Both of them seem full of energy and still jitterbug and ballroom dance back home at their retirement community in Florida. 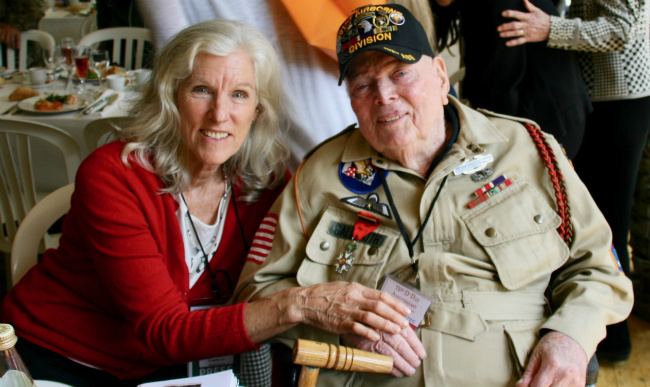 William Galbraith, age 95, jumped into France as a Paratrooper on D-Day. He also jumped on the 50th anniversary of D-Day from a C-47 at the age of seventy. Galbraith traveled to France with his son, Donald, number six of ten children. He cried when he told me how he had lost his wife of fifty-six years. I held his hand and wiped away my own tears. 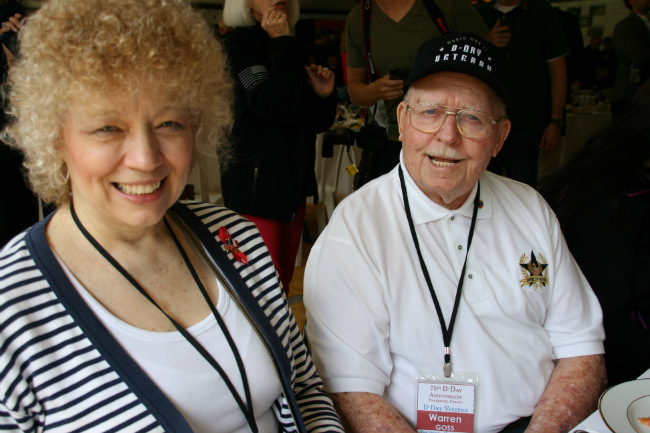 Warren Gross, 94 and his daughter Rhonda

Warren Gross, age 94, travelled with his daughter, Rhonda, from Pittsburg. Rhonda talked about the camaraderie she has noticed among the returning veterans.

“It is special to see how they talk to each other and reminisce. They share a deep understanding that must be healing for them.”

Leila Morreson, 97, was twenty-two when she served as a nurse in the war. She remembers climbing down a rope ladder into a landing craft and heading to the beach. She was the only woman in her group of veterans. 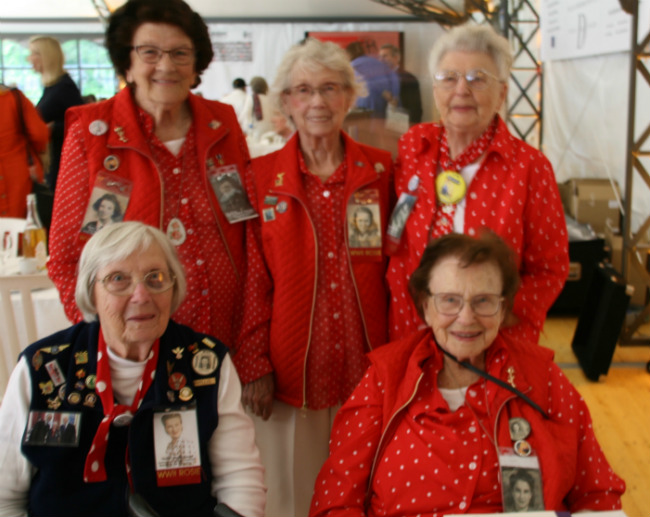 Four “Rosie the Riveters” from the San Francisco Bay area came for the anniversary. They worked as journeymen welders, a draftsman and as a riveter on airplanes.

“We wanted to do our part for the war,” Marion said. They all agreed that it was a thrill to be in Normandy. 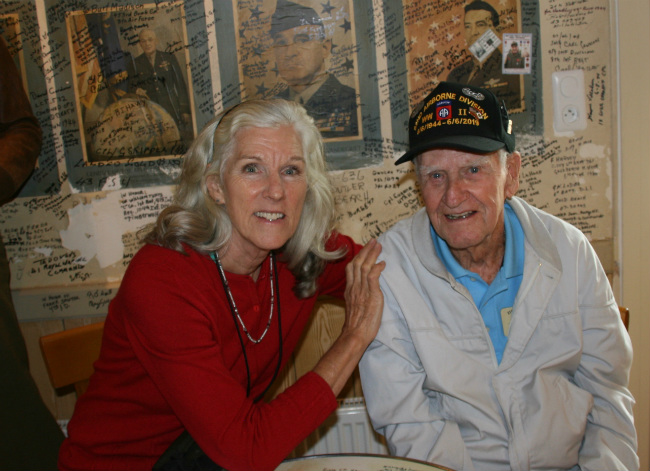 By far the most spry of all the veterans I talked with was George Cross, a Paratrooper with the 82nd Airborne, who jumped into Normandy in the early hours of June 6th. George was only seventeen when he joined the army and nineteen when he parachuted into France.

After the war, he used his parachuting skills as a smoke jumper, fighting forest fires in Montana.

At one of the events this week, someone called his name and when he turned, a man from his regiment that he hadn’t seen in 75 years stood in front of him. They had a very moving reunion. 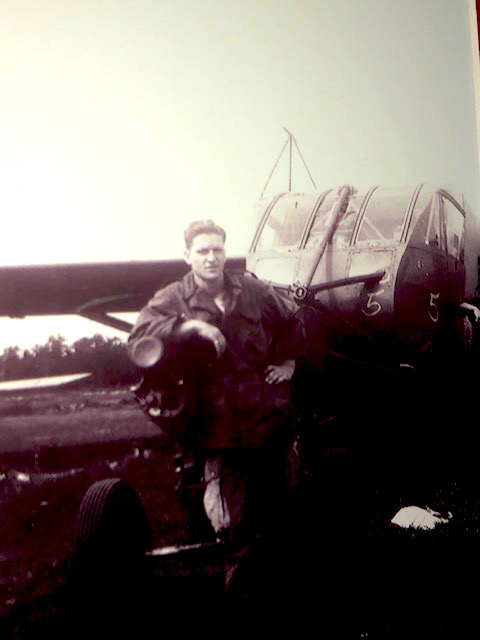 Cross is a great dancer and is known and loved in his retirement community in Arizona. He came to France as a guest of Stephen Ambrose Historical Tours and his community raised the rest of the funds for his airfare and for another resident, George Harmer, to accompany him.

In a speech he gave to the French, he said, “I’m over here to serve your country and mine. I believe in America and in our flag.”

Sixteen veterans brought over with the Best Defense Foundation. Leila Morreson, 97, 3rd from right in photo

Many of the veterans returned through the generosity of non-profits or donations from friends. Donnie Edwards, founder of Best Defense Foundation, brought sixteen veterans and family members over for the ceremonies.

Edwards, who was a linebacker for the San Diego Chargers football team, started his organisation in honour of his grandfather, a full Apache Indian and Pearl Harbor survivor.

“My grandfather was so proud to be an American. He taught me that the flag represented opportunity and freedom and to be full of gratitude for the country we live in,” Edwards said. “This is my way of giving back, of honouring the veterans and giving them a chance to heal by coming here.” 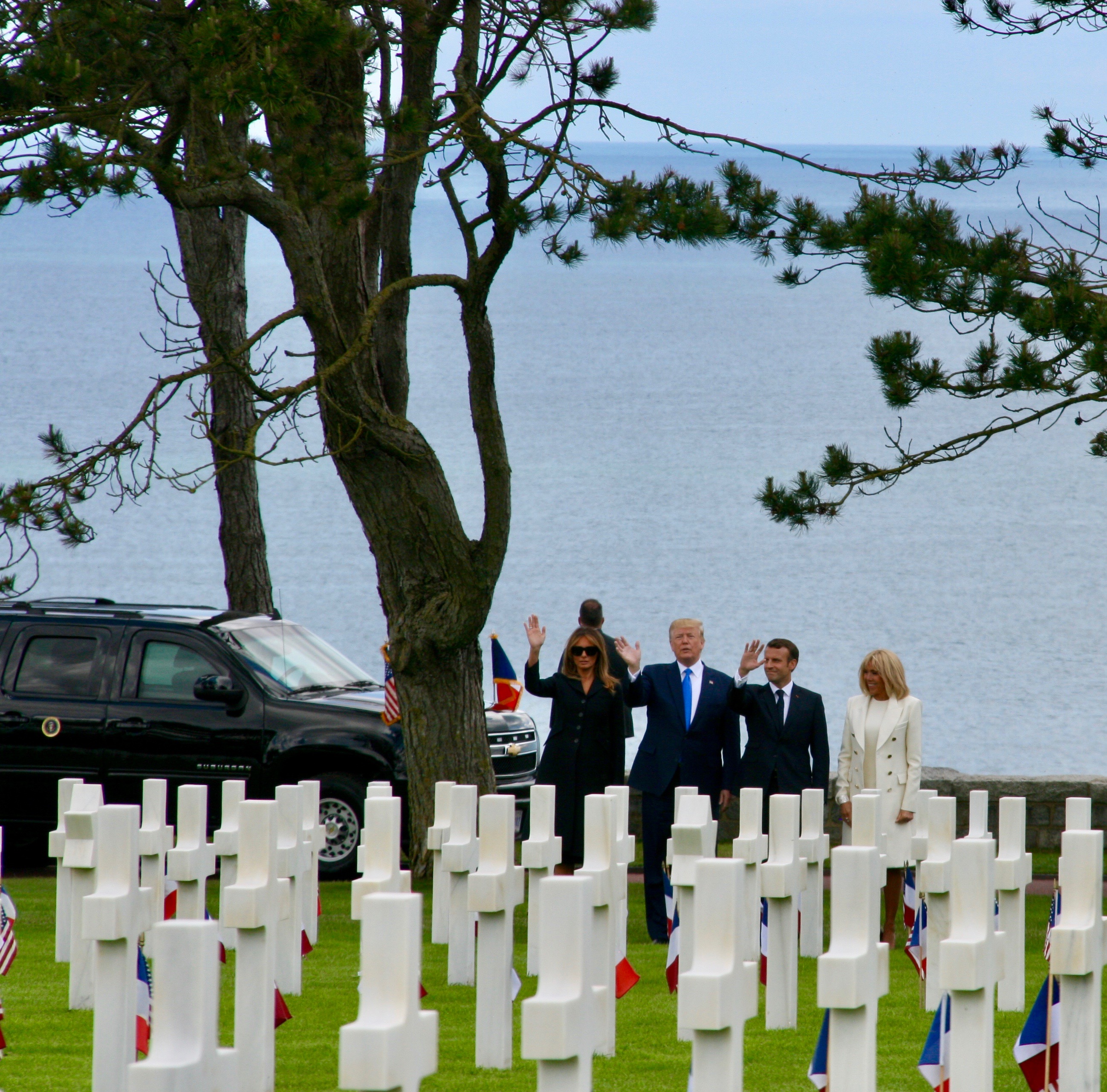 On the 6th of June, I joined twelve thousand others to honour the veterans at the Normandy American Cemetery situated above the American landing beach, Omaha, the deadliest of the landing beaches. The cemetery, designated as a piece of American soil, includes more than 9,300 burials of American soldiers who died in the invasion.

We listened to the presidents of France and the U.S. give speeches praising the courage of the veterans. Five of the returning soldiers were awarded the French Legion of Honour. Being at the cemetery for the event gave a power and depth to the ceremony. 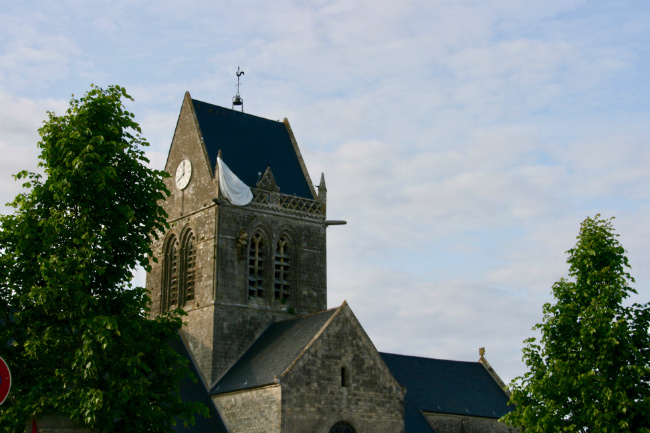 Scott Desjardins, Superintendent of the American Cemetery, spent twenty years in the army before working for the American Battle Monuments Commission, which oversees the cemetery. “It is a great honour to have this job. These places are holy,” he said. “For me, this job is ‘soldiers taking care of soldiers’.”

It has been one of the most moving experiences of my life, to be a part of these days of commemoration and to know that these men and some women, will return home nourished by their time in France. 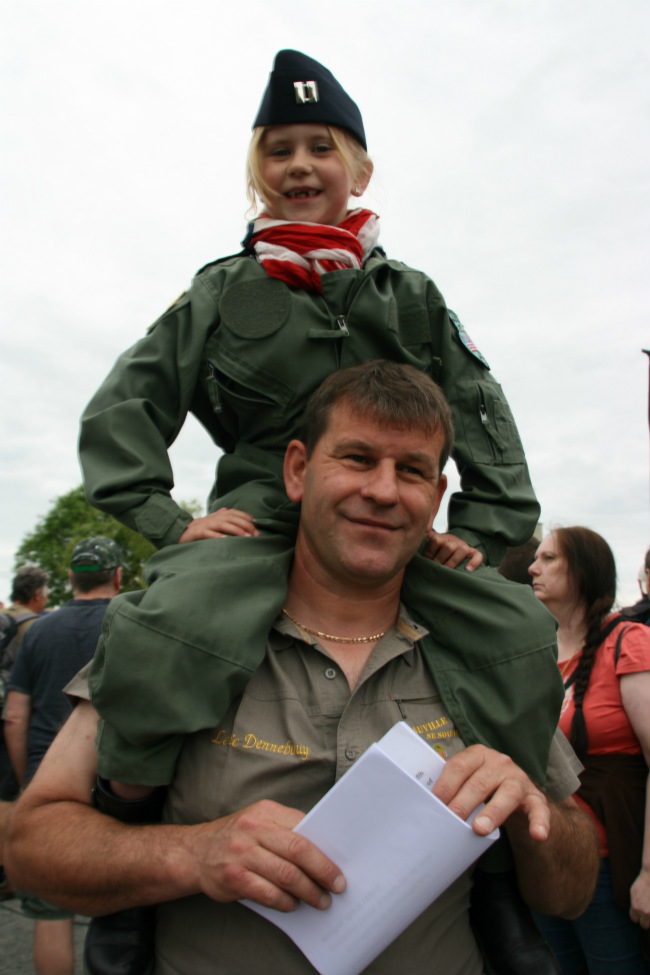 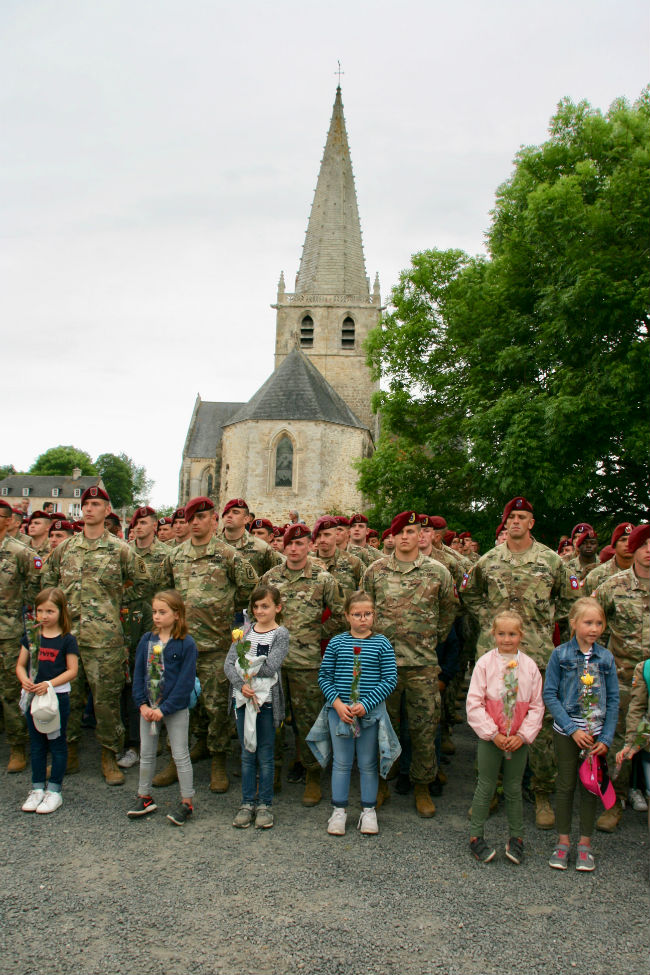