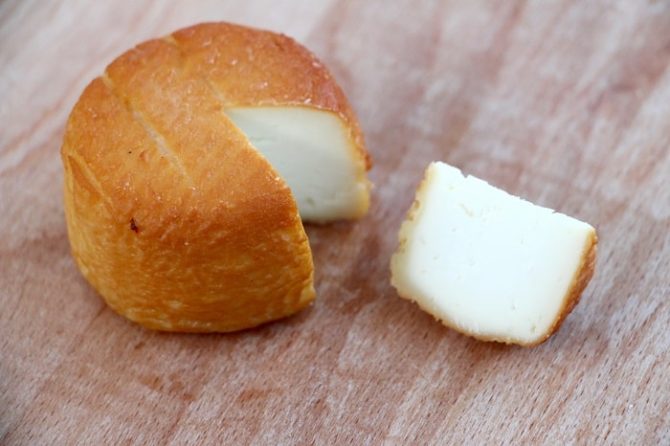 Cheese is one of the glories of French cuisine, but choosing among hundreds of French cheeses can be intimidating. If you have ever been to a French restaurant where they wheel out a big “chariot” covered with dozens of cheeses, and ask you to pick what you’d like, you know what I mean.

To learn more about French cheese and cheese etiquette, I spoke to expert Emily Monaco, an American who has lived in Paris since 2007. Her obsession with all things delicious – but especially cheese – has led her to build a career giving food tours of Paris’s Marais district with Paris by Mouth. She also writes about food and drink for publications including The Wall Street Journal, the BBC, and EatingWell. 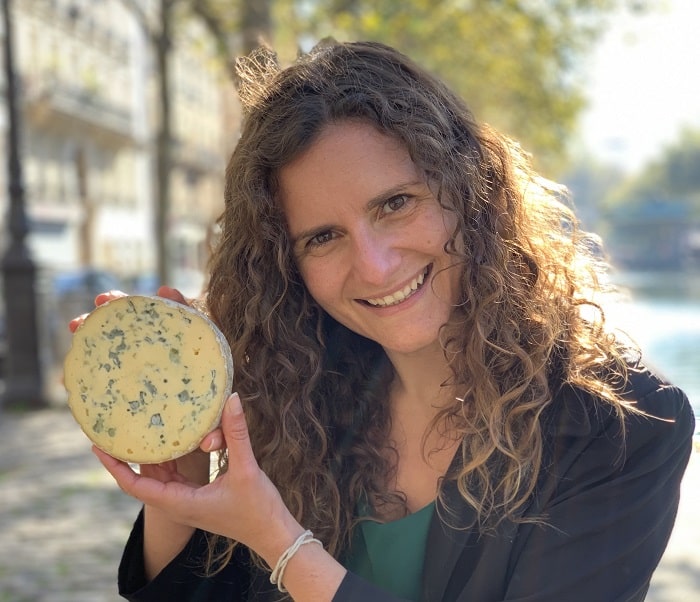 The French sometimes serve a “cheese course” with their meals. What is that?

At a traditional French meal, cheese is served after the main course and before the dessert. This is different from in America or the U.K., where cheese is often served as an appetizer.

For a French cheese course, a selection of cheeses is offered, and each diner picks which ones they would like to have.

If I’m hosting a dinner party, how many cheeses should I serve?

I like to serve cheese in odd numbers for purely aesthetic reasons (presentation is very important in French cuisine!) At a typical dinner party, that could mean three or five – usually five. More is better when it comes to cheese, in my opinion!

How do I pick which cheeses to serve? 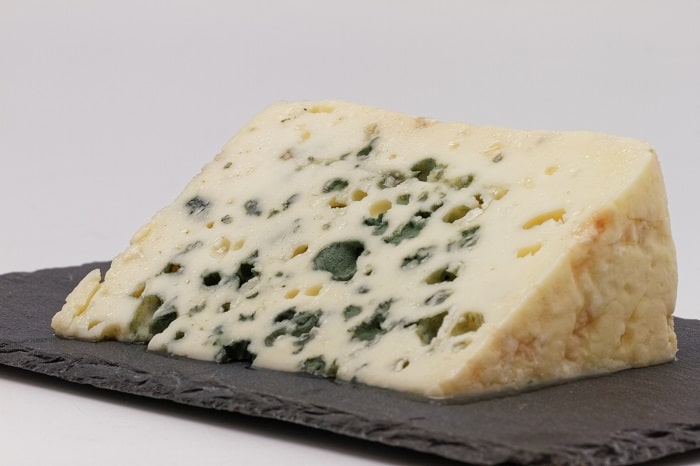 It’s good to have a variety, with different levels of assertiveness (a cheesemonger friend once told me that I should call a cheese “assertive” rather than “strong” because cheese is alive, it has a personality, and calling it strong can hurt its feelings!)

If you’re serving just three cheeses, I would start with something mild like a fresh goat cheese or a six-month-old Comté. Add a medium cheese like a bloomy-rinded Camembert or Brie. For the third cheese, I would pick something both assertive and colourful: think either an orange-coloured washed rind Epoisses or Maroilles, or a blue like Fourme d’Ambert or Roquefort.

No matter what you choose, make sure your cheeses are served at room temperature – otherwise, you’ll lose a lot of the nuances. Be sure to take it out of the fridge at least an hour before serving.

How much cheese should I serve? 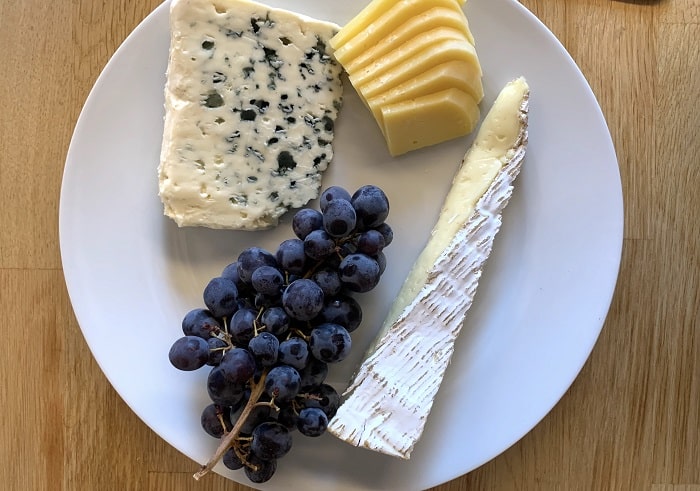 For a cheese course that follows the main course, you can expect your guests to eat 1-2 ounces of cheese each. If the cheese is served as an appetizer, it is typically twice that amount. But don’t serve just the minimum; it’s ok to have leftovers!

Should I serve anything else with the cheese?

Bread, of course! A crusty baguette is the standard. I also like breads with nuts or dried fruit, particularly with more assertive, pungent cheeses like blue or really sharp cheddar.

The French often stop right there and serve what could seem like a rather austere plate of cheese. When I first moved to France, I would add a lot of fruit and nuts to the board, which led to no small number of raised eyebrows from locals. But I don’t let that stop me! I do think a bit of seasonal fruit – some grape clusters, sliced apple or pear, or maybe some quartered figs – is a nice touch. Depending on the cheeses you’re serving, a sweet black cherry jam or quince paste can also be nice. But I would limit it to two to three accompaniments, so the cheese board doesn’t get too crowded and the cheese remains the star of the plate!

Traditionally, the French serve a simple green salad with a vinaigrette dressing at the same time as the cheese, which I quite like. If you’re serving your cheese course after the main, this is a nice way to add another vegetable to the table.

What about wine? I’ve heard you should drink red wine with cheese. 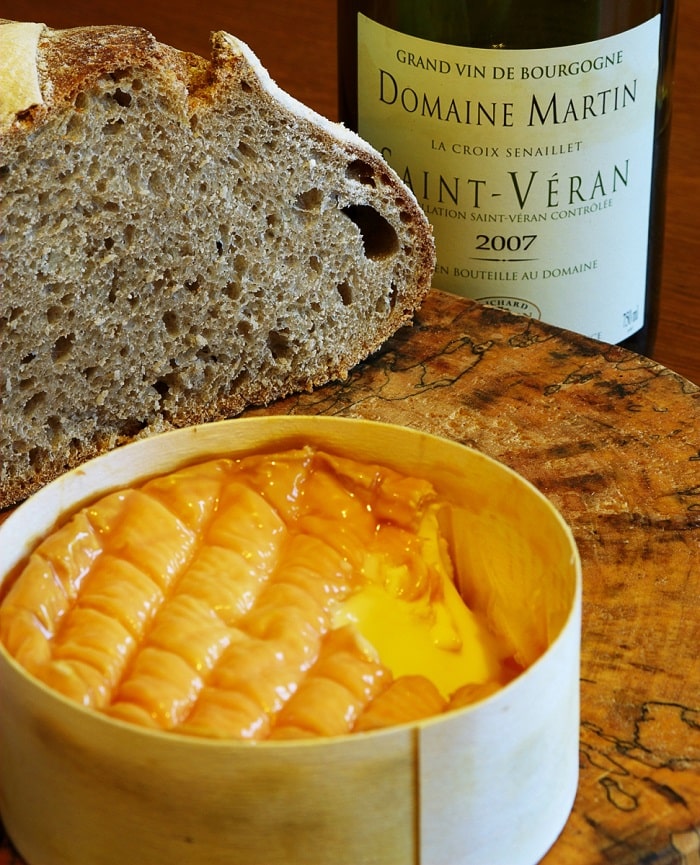 This is really a matter of personal taste. Red wine is traditional but white wine is usually the better choice. Red wines can be tannic, and those tannins can clash with the flavours of the cheese, bringing out the natural bitterness in both. If you must drink red, go for it, but remember that the less tannic it is, the better. Good choices are wines made from more northern regions: think fruitier Pinot Noir from Burgundy and the Loire Valley or Gamay from Beaujolais.

Of course, you can’t go wrong with bubbles! A Champagne or a good Crémant is an excellent choice. 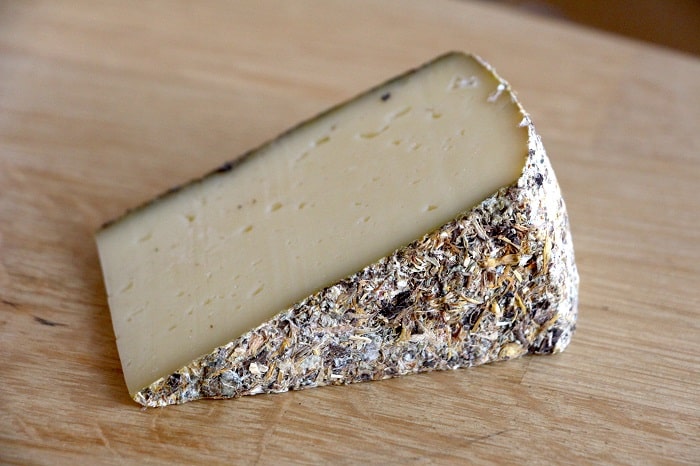 When the cheese board comes around to you, make a serving of whichever cheeses you want to try. Cut off what you want and put it on your plate. Then eat the cheeses in order from mildest to most assertive, as this allows you to best enjoy the nuances of each one. For example, after you’ve had a pungent, salty Roquefort, your taste buds will be saturated and you won’t be able to taste a milder cheese very well.

You may see that most French people only try one or two things. This is a norm but far from a rule, and it’s definitely not rude to try a little bit of everything. Just be aware that you shouldn’t let your eyes be bigger than your stomach, as it’s impolite to take more than you can finish!

I’ve heard that there are complicated rules about how to cut cheese, is that true?

It can seem complicated, but when you bear in mind the reasoning behind the rules, it’s actually pretty simple!

Cheeses age from the outside in, and the rind of French cheeses is usually part of the cheese eating experience. On a double-cream Chaource, for example, you have at least three textures: the bloomy rind, the fudgy heart, and a runny layer between the two. The ideal cutting pattern will ensure that each guest gets a piece that has all of the textures and flavors of the cheese in the same ratios in their portion.

The most complicated is always a wedge of Brie, which has a point or “nose” that’s so tempting to cut right off – don’t do that! Instead, cut from the “nose” end on an angle, alternating the direction of the angle so that the Brie stays in a triangle for as long as possible. When you get to about an inch or two from the rind end, cut slices perpendicular to the rind so that no one ends up with pure rind.

When in doubt, let someone else go first and follow their lead!

French cheeses are so good! Can I bring them into the U.S.? 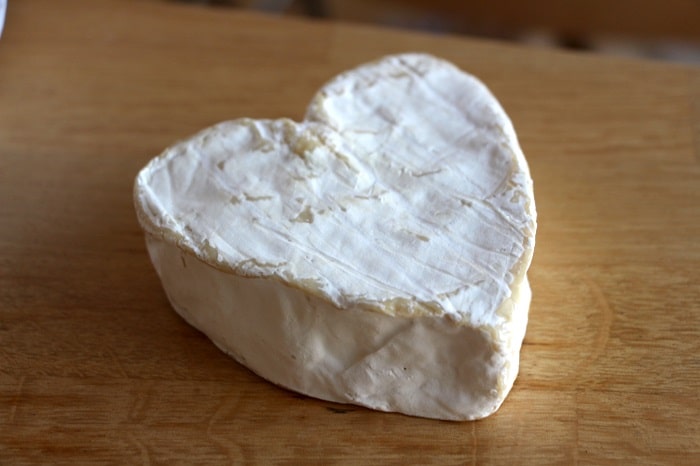 Absolutely! While raw milk cheeses are hard to come by in the U.S., they are a dime a dozen in France, and you’re allowed to bring them home for personal consumption – you just have to declare them at customs. I always ask my cheesemonger to vacuum seal my cheeses (“sous vide” in French), and then I pack them in my checked luggage, where they will stay cooler. Buy the cheese as close to your flight as you can so it will be as fresh as possible. If you are buying a soft cheese, buy an entire one because it will last longer (cutting it up shortens its life.)

Last question: if you had to pick five cheeses to serve for a cheese course, what would you choose?

Oh, that’s a fun question! I would choose:

– A Sainte-Maure de Touraine, which is an ashed goat cheese from the Loire Valley, the heart of French goat cheese production. It’s grassy and mild, the perfect cheese to start things off.

– A Chaource, which is a double-cream that’s kind of halfway between butter and cheese. It’s a real crowd-pleaser.

– An 18-month-old Comté, which is an alpine cow’s milk cheese that affords the perfect blend between the fruity notes of young Comté and the buttery, nutty, almost caramel flavours this cheese takes on as it ages.

– An Époisses, which is a cow’s milk cheese from Burgundy that totally smells like socks but tastes like custardy heaven.

– A Stichelton (gasp – a British cheese!) which is a raw-milk Stilton and is one of my all-time favourite blue cheeses. If I had to stay in France, I’d go with a Bleu du Vercors, which is a Rhone alpine cow’s milk blue cheese that’s nutty and sweet and just phenomenal.

To go with them, I’d pair quartered fresh figs (particularly good with the blue), toasted almonds, honeycomb or strawberry preserves (both great with the Comté, and the honeycomb is lovely with the goat), a baguette, and a whole-grain Danish-style rye bread that is perfect with both the blue and the Époisses.

For more about Emily Monaco, please check out her weekly newsletter and Instagram posts.