A History of the Auberge du Père Bise: Featuring an In-House Recipe 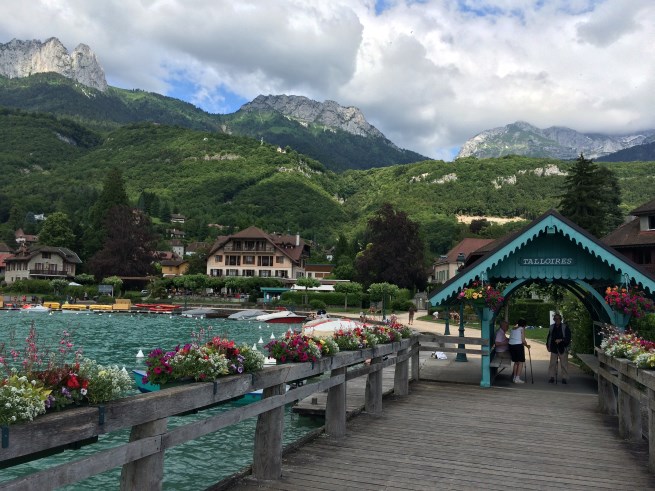 In the village of Talloires, along Lake Annecy, sits a rustic-looking inn. Originally a simple guinguette, or tavern, the Auberge du Père Bise is a prestigious hotel and restaurant. Run by the same family for four generations, the kitchen has almost always been under the command of women chefs.

During a recent stay at the Auberge, I took advantage of swimming in the pure waters of the lake and sunning on the beautifully landscaped grounds. Even better, though, was walking around the well-appointed dining room to glean a bit of the establishment’s history.

In 1903, François and Marie Bise bought a tiny chalet in Talloires. Boats carrying tourists and inspiration-seeking painters like Paul Cézanne stopped off at Talloires, and François saw the advantage of creating a guinguette there. With Marie at the helm in the kitchen, the couple quickly developed a reputation among well-heeled guests looking to taste the fresh lake Char (omble chevalier) or rabbit terrine.

The garden and sunning area of the Auberge du Père Bise in Talloires, along Lake Annecy. Photo: Allison Zinder.

Each successive generation of the Bise family has introduced its own brand of charisma, and its own specialties, to the Auberge. Under François and Marie’s son, Marius, and his wife Marguerite, the restaurant was expanded and officially named “Auberge du Père Bise” – and was proclaimed a temple of gastronomy in 1937. In the tradition of nearby Lyon, where women chefs were called les mères lyonnaises, Chef Marguerite turned out signature dishes like crayfish gratin and fattened chicken from Bresse with tarragon.

Marius and Marguerite’s son, François, took over in 1965, after training with Fernand Point at the Pyramide in Vienne. With his wife Charlyne, François became an “aristocrat of French cuisine” and frequented the likes of Paul Bocuse and Alain Chapel. And by the time he passed away in 1980, his daughter Sophie was already well on her way to making sure the kitchen would be reclaimed by a woman chef.

Today a member of the prestigious Relais & Châteaux network, the Auberge du Père Bise’s restaurant has one Michelin star. Sophie Bise expresses her creativity in the kitchen, using local products, and continues not only her own family’s traditions, but also the institution of women chefs in France. In May 2017, the Auberge du Père Bise will pass out of the Bise family, and into the capable hands of Jean and Magali Sulpice. The change will certainly mark the end of an era.

Warm Oysters and Shellfish with a Farm-fresh Chicken Liver Gâteau

For the shellfish and the sauce:

Cockles and winkles for sale at a market in the 20th district of Paris. Photo: Allison Zinder.

How to make it: