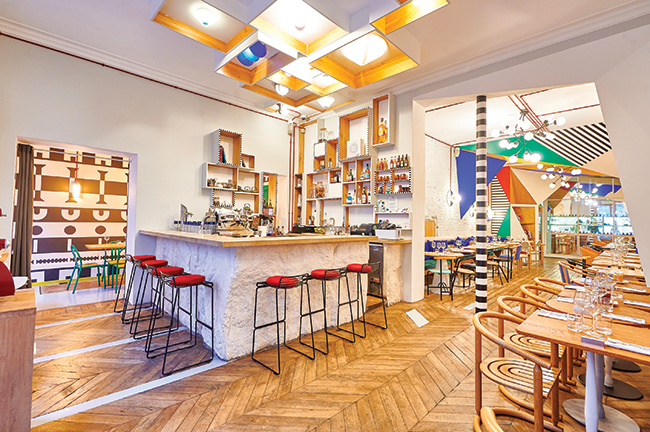 Even if Mâche weren’t such a good restaurant, the rue de Chabrol where it’s located, in the 10th arrondissement not far from the Gare du Nord, would be well worth a stroll for flâneurs, or those who like savouring the nonchalant beauty and charm of a traditional Parisian streetscape. Beginning just outside of the very good Marché Saint-Quentin, a covered market that’s an excellent place to shop for cheese, charcuterie and other treats to bring back to the UK before hopping on the Eurostar, the rue de Chabrol runs between the boulevard de Magenta and the rue La Fayette, and what makes it so delightful is that it offers a shop-window experience of Paris before the city was hit by galloping gentrification. Here you’ll come across a wonderful little oyster bar, an old-fashioned toy shop, an African hair salon and a neighbourhood quincaillerie (hardware store) that has somehow withstood the ravages of chain stores and Amazon.

Mâche fits into this mix perfectly, since this spacious restaurant with plank floors, exposed stone walls, a Memphis-style deco and an open kitchen has a lot of character. Arriving for lunch, proprietor Vincent Geraud offered us a warm welcome, and an eager waitress explained the menu in cheerful detail, noting young chef Michaël Gamet’s particular commitment to running a sustainable, no-waste kitchen and using only carefully sourced, mostly organic, seasonal produce.

Gamet, 26, is originally from the Franche-Comté area of eastern France; he went to hotel school in Poligny at the age of 15, and subsequently continued his studies at the prestigious École Ferrandi in Paris. He has since worked at an impressive roster of restaurant kitchens, including the Chiltern Firehouse in London, La Table d’Edgard in Lausanne, and L’Astrance in Paris, and cooks a very personal contemporary French cuisine that’s inspired by his eastern French origins and his travels in Asia.

As we discovered with our starters, Gamet’s cooking is intricate in the same way as a Fabergé egg is: until you’ve actually experienced it, it’s difficult to imagine how the various different ingredients, flavours and textures will work together. If the taste of my warm salad of crosnes (Chinese artichokes, those small knobby root vegetables which taste like a miniature Jerusalem artichoke) with pistachios, lardo di Colonnata (silky white Tuscan fatback), smoked yogurt and mixed peppercorns could be roughly imagined on the palate, my friend’s spaghetti of celeriac with Cointreau, calamansi (Philippine lemons), a cloud of mozzarella, reduced Port and rye bread crumbs evaded the nets of our combined gastronomic imaginations.

This is also why it came as such a delicious surprise – the flavours and textures made an elegant edible melody brightened by the citrus and anchored by the Port. “This is why I so missed going out during the lockdowns,” my friend said. “It’s such a pleasure to eat food I could never invent to say nothing of cook for myself.” I have to say I agree with him, too. Our mains were succulent but refined as well. My cod filet came with vinegared sushi rice, raw fennel bulb and grapefruit in Japanese plum liqueur, and goat’s milk with wasabi. This might sound incomprehensible and perhaps too fussy, but again the flavours were fascinating and deeply satisfying. Braised beef cheek in black curry with baby plantains, teff (the Ethiopian grain) and Brussels sprouts created a lot of pleasure across the table, too. Desserts were wonderful as well, including a Franche-Comtois version of cannoli (deep-fried mascarpone-mousse-filled Sicilian pastries) that was dusted with pine sugar from Franche-Comté and toasted pumpkin seeds, plus a sprinkling of Chartreuse, the herbal elixir made by monks; and a superb chocolate tarte with chipotle pepper, a taste that referenced chocolate’s Mexican origins, and maple syrup-flavoured almond milk ice cream.

The menu changes regularly here, service is exceptionally friendly and they pour a fine selection of wines by the glass, so this is an ideal address at which to celebrate your arrival in Paris or console yourself before returning home, but it well warrants a visit even if you’re not travelling by train.