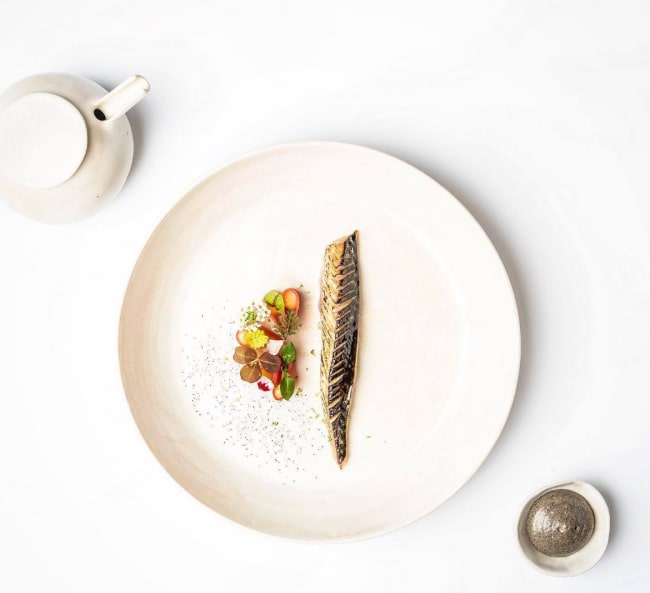 Since she became the fourth generation of her family to run the kitchen their eponymous restaurant in Valence, in the Drôme, and the fourth woman ever to win three Michelin stars, Anne-Sophie Pic has developed a delicate but powerfully original and brilliantly ethereal culinary style that’s all her own.

Dining recently at the two Michelin-starred restaurant she runs at the Hôtel Beau-Rivage Palace in Lausanne, one of the grandest hotels in Europe, every dish that arrived at the table was edible poetry, but each had its own distinctive logic and personality. Twenty-five years after she took over the kitchen at Pic as a 27-year-old with no formal training, Pic, 52, has become the most accomplished female chef in the world.

We selected the Lake View in Winter menu for 250 Swiss francs, and it debuted with a plump oyster from Utah Beach in Normandy with percussive garnishes of smoked pike eggs and a dressing of sorrel and combawa citrus, a dish that was an exquisite meditation on the sea. Next, a fragile berlingot, or dumpling, filled with melted cheese in a cabbage broth seasoned with anise and cardamom, delivered us to the Alps with an umami richness that was distinctively Swiss. Line-caught John Dory with abalone, barbecued shiitake mushrooms and a mushroom dashi broth flavoured with Meyer lemon and sumac was a dish of real genius for conjuring up such an intense experience of gastronomic luxury with sustainable ingredients; while Swiss beef marinated in green shiso, mint and caraway with grilled leeks and whelks had a Falstaffian bravado. And a dessert of Itakuja chocolate with cocoa ice-cream, turmeric mousse and candied passion fruit left us mute with pleasure. The service here was flawless and the wines served by the glass were chosen with ruminative originality. In a time of turbulence, this was a spectacular meal very much worth travelling for.

Previous Article The Delights of Uzès in the South of France
Next Article Peugeot Saveurs: An Illustrious History in Kitchenware